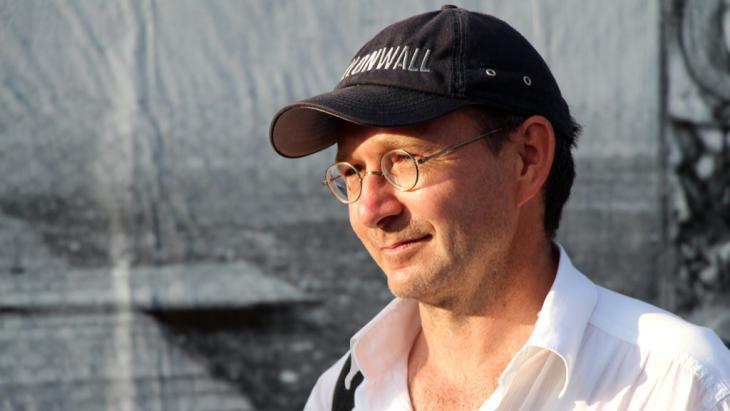 Kai Wiedenhofer's photo project "Forty out of one million"

Giving victims a face and a voice

Berlin photographer Kai Wiedenhofer is perhaps best known for the many years he has spent documenting the Israeli–Palestinian conflict. He has recently initiated a new photo project: "Forty out of one million" focuses on the fate of refugees who have fled the Syrian war. Felix Koltermann spoke to him about his work

Herr Wiedenhofer, what made you decide to pursue a project about Syria?

Kai Wiedenhofer: I studied Arabic in Syria from 1991 to 1993. I got to know the country well during this time, and I am very fond of the people there. In my view, Syrian society is the most modern civil society you'll find in the Middle East – even more so than that of the Palestinians, and I've spent a great deal of time with them. That's why it's bitter for me to see how this is all being torn to pieces and how this achievement is being lost.

At the forefront of your project are the refugees from Syria who feature in your portraits. Why this particular focus?

Wiedenhofer: I spent January 2013 in Aleppo. This was before the emergence of Islamic State there. But it was already very dangerous to work there at that time. It's become much worse in the meantime. As a matter of fact, Western journalists can't work in Syria any more. So I began thinking about how I could visualise the war without having to enter the country.

Then there's the matter of there being so many cameras present in Syria that you need to have a very definite idea, so that you don't just end up with the 500th visualisation of a fired anti-tank gun. I had carried out a similar project in the Gaza Strip, and now I applied the concept to Syria. The difference was that the people from Syria are refugees. This meant I couldn't take photographs of them in their homes; the loss of their homeland makes them much more sensitive.

In what respect was it a more sensitive matter to work with these people from Syria? Could you be a little more specific?

Wiedenhofer: The people I photographed have been completely uprooted. They had been leading quite normal lives, in good circumstances; they had jobs and a tight social network. Now they've been wrenched from their normal environment and they are vulnerable. Often they've been in mortal danger, many have lost relatives, have been in detention or are severely traumatised. Some are also afraid of the Syrian intelligence agency, because they still have family members back in Syria. That's why they are initially very cautious and reserved. On the other hand, they are also keen to show their injuries, because they have been the victims of injustices. And anyone who has been the victim of an injustice wants the world to know about it. 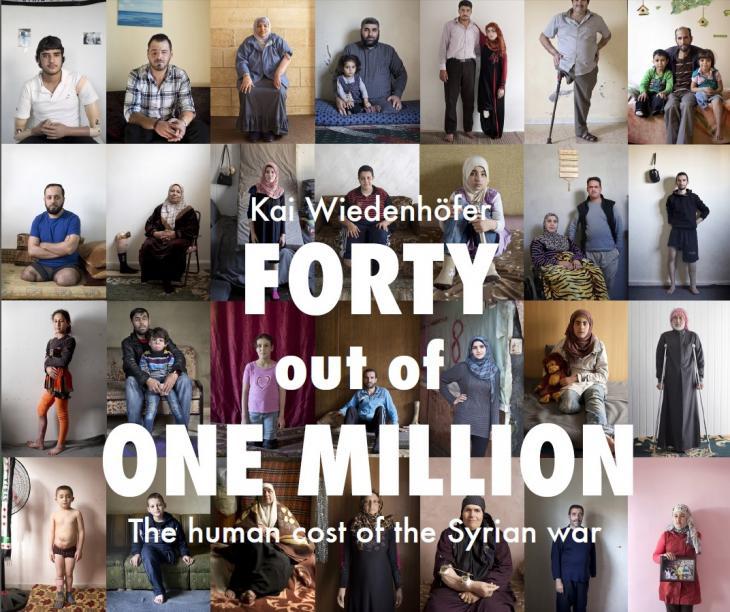 Creating a visual presence of the war: "The title was chosen to clearly show the dimensions of the Syrian war. The idea was to clearly express the quantity of people affected, without just portraying an anonymous mass. I wanted to tell individual stories," says Kai Wiedenhofer

Why did you choose this very direct title  "Forty out of one million"?

Wiedenhofer: The title was chosen to clearly show the dimensions of the Syrian war. The idea was to clearly express the quantity of people affected, without just portraying an anonymous mass. I wanted to tell individual stories. I don't have to do anyone a favour with this project, and that's why I decided on this title. In December 2014, a WHO report stated that there were already one million people injured as a result of the war in Syria, and 200,000 people had been killed. That means every 22nd Syrian has suffered an injury. That is incredible! If you apply those statistics to the population of Germany, the huge extent of the problem becomes clear.

And even if this war ended today, the population, families and the state would have to deal with all these injured and disabled people. Many people will need help for the rest of their lives. If someone has lost both arms, then he needs help going to the toilet. This is a huge burden for the economy, even if peace does eventually prevail.

I remember what it was like in Germany in the 1970s. You would see many people wearing leather gloves or with prostheses or walking around on crutches. All that's disappeared from public view, because those people have all died in the meantime. And that's why the war is no longer present where we are. That's why it was important for me that the project created a visual presence of the war.

These portraits are of people with serious physical injuries. How is it possible to photograph these people in a dignified manner?

Wiedenhofer: The key thing is to make the injuries photographically redundant, or to allow them to rescind as far as possible. I didn't photograph some people because they had been disfigured. Photographically speaking, there is nothing I can do; all that's left is pure horror.

Unlike previous projects, you didn't publish this as a book through a publishing company, but as a self-published brochure. Why?

Wiedenhofer: On this occasion I wanted to develop something more quickly and not choose the book medium with its long production phases. I had total control of this project, from taking the pictures right through to the layout. For me, it's a "multi-purpose tool". I've also sent it to various members of parliament and I plan to take it to the Federal Agency for Civic Education and other foundations. It would of course be great if it could be published in a five-figure print run and distributed free, as a way of informing people.

In your epilogue you are critical of the editorial policy of Western media, which often don't publish pictures of victims for "ethical reasons". What is it that bothers you exactly about the media approach to images of war?

Wiedenhofer: You simply have to consider what an appropriate visualisation of war can be. War is not a cricket match, not an adventure. And we're very strongly influenced by film industry images. Often, visual Hollywood plots are simply reproduced. But in principle, this doesn't tell us anything about the effects of modern weapons.

As far as Syria is concerned, I also see the problem in the obsession with Islamic State. But this is just a part of the Syrian war. It's very easy to instrumentalise the media, once you've understood how they work. More people die every day in Syria than in that Germanwings plane crash, when the world revolved around that story, and that story alone, for three weeks. Of course, it's terrible for the relatives of the victims, but in the end it's the same: people die every day, every day, every day…

A 56-page brochure has been published as part of the project "Forty out of one million". It can be ordered directly from the photographer for the price of €10 (kai.wiedenhoefer@t-online.de).

The Hanau terror attack showed just how dangerous racist conspiracy theories can be. And yet it is a threat that continues to be underestimated. Commentary by Daniel Bax END_OF_DOCUMENT_TOKEN_TO_BE_REPLACED

How can we truly appreciate the richness of cultures not our own? In her recent book "What is Islamic art? Between religion and perception", art historian Wendy Shaw explains the ... END_OF_DOCUMENT_TOKEN_TO_BE_REPLACED

In his controversial book published in 2020, French author Pascal Bruckner describes anti-Muslim sentiment as a fiction, claiming that the term "Islamophobia" is being used to ... END_OF_DOCUMENT_TOKEN_TO_BE_REPLACED

Islam scholar and social anthropologist Marie-Christine Heinze is head of an academic exchange project with the University of Sanaa on "Post-conflict Reconstruction in Yemen". In ... END_OF_DOCUMENT_TOKEN_TO_BE_REPLACED
Author:
Felix Koltermann
Date:
Mail:
Send via mail

END_OF_DOCUMENT_TOKEN_TO_BE_REPLACED
Social media
and networks
Subscribe to our
newsletter