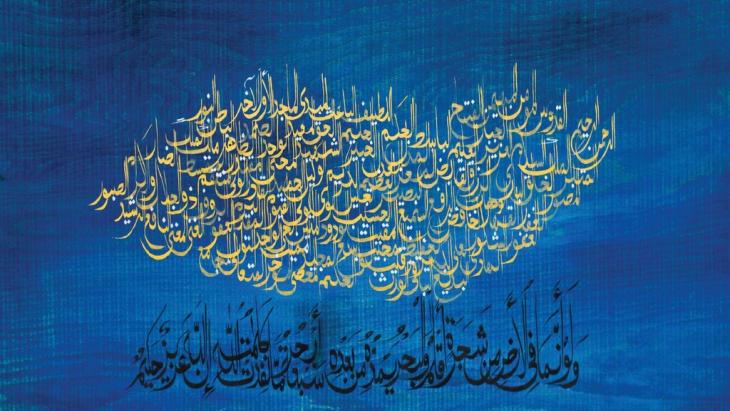 Karl-Josef Kuschel's "Goethe and the Koran"
Islam for the 21st century? Look no further than Goethe

No other Western poet was arguably so well-versed in the Koran or so fascinated by Islam as Germany's national hero, Goethe. In a new publication that examines all Goethe's writings relating to Islam, theologian Karl-Josef Kuschel shows that the poet's message is still highly relevant today. Stefan Weidner read the book

For almost exactly 20 years now, Goethe's West–Eastern Divan has been the book of the moment. After the terrorist attacks on New York and Washington on September 11, 2001, anyone asking what common ground there could now be between "Islam" and "the West" inevitably lighted upon Goethe's 1819 collection of poems (which is what a "divan" is).

Although several, top-flight, thoroughly annotated new editions were published in the 1990s (namely by Katharina Mommsen and Hendrik Birus), Goethe's most comprehensive cycle of poems (and the only one he himself compiled as a book) was long something of an insider tip. The texts, with their references to Islam, remained alien to a larger audience, despite the fact that for a better understanding, Goethe himself had added a prose section that was over 150 pages long – a veritable literary and cultural history of Islam penned by an enthusiastic, orientalising layperson.

This burst of creativity was triggered by Goethe's discovery of the poetry of Shams al-Din Muhammad Hafez of Shiraz, who lived in fourteenth-century Persia. In 1814, Austrian orientalist Joseph von Hammer-Purgstall was the first to translate Hafez's complete "divan" into German. Goethe described the incredible impact of Hafez's poetry thus: "I had to respond productively, otherwise I could not have persisted in the face of such a powerful figure." In the book under consideration here, German theologian Karl-Josef Kuschel, emeritus professor of theology at the University of Tubingen, quite rightly refers to this as a "great moment in world literature". 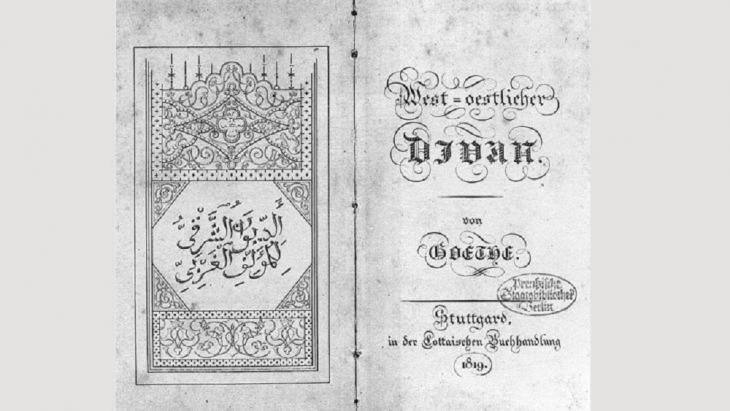 The fair copy of Goethe's collection of poems "West-Eastern Divan" is part of the UNESCO world documentary heritage. It was inspired by the work of the Persian poet Hafez (who died around 1390), which Goethe knew from Joseph von Hammer-Purgstall's German translation, published in 1812. It is the book of the hour, writes Stefan Weidner. "After the terrorist attacks in New York and Washington on 11 September 2001, anyone asking what common ground there could now be between "Islam" and "the West" inevitably lighted upon Goethe's 1819 collection of poems (which is what a 'divan' is)"

Hafez' work is considered the pinnacle of a centuries-long tradition of poetry known as "ghazal" that adhered strictly to form. It was born out of Arabic love poetry, whose mysticism was elevated and can still be found to this day in many Islamic languages.

Hafez's particular art was his ability to mix the worldly and the religious levels in such a way as to eliminate all unambiguity and to merge the two.

For example, the lover (male or female) could be God; wine-induced intoxication could be religious ecstasy, but they don't necessarily have to be. Goethe was the first important literary figure in Europe to see that Hafez was a world-class poet and on a par with Shakespeare, Dante and Homer.

The material in Kuschel's richly annotated and magnificently illustrated reader on "Goethe and the Koran", which was published recently, is largely drawn from the poems of the "Divan". Kuschel explains this material and puts it in context in a meaningful manner with the help of texts and evidence from other periods of Goethe's work. Goethe's engagement with Islam lasted his entire life, peaking in both his early works and his twilight years.

Kuschel begins with Goethe's excerpts from a translation of the Koran and fragments of a planned play about Muhammad, which saw the founder of Islam in the context of a cult of genius and the Storm and Stress movement. In this respect, Goethe wanted to take a completely different approach to Voltaire, whose "Mahomet" tragedy brought a targeted slander of the Prophet as a scrupulous charlatan onto the stages of Europe. 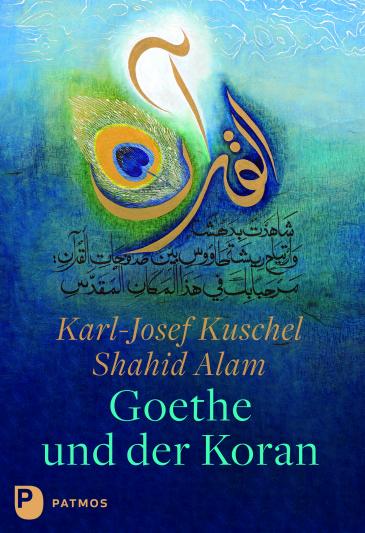 Karl-Josef Kuschel refers to Goethe's discovery of the poems of Hafez and the tremendous impact they had on the German poet as "a great moment in world literature". The book documents all of Goethe's writings on the Koran and Islam. Boldly colourful calligraphies by the Pakistani artist Shahid Alam complement the text, deriving their liveliness not from moving figures, as in Western art, but from sweeping characters

While Goethe's intention was not to idealise Muhammad, he considered him to be a timeless embodiment of a conflict between numerous religious figures independent of their respective cultures: the conflict between moral idealism and inner-worldly, political constraints that compromise all pure theory. According to Kuschel, Goethe saw this kind of conflict in his theologian friends Johann Kaspar Lavater and Johann Bernhard Basedow.

A counterpoint to Voltaire's polemical "Mahomet"

When Grand Duke Carl-August asked Goethe to stage Voltaire's "Mahomet" in Weimar in 1799, Goethe found himself in an impossible situation. He got around it by translating the play himself and removing any particularly slanderous passages.

As far as poet and theologian Johann Gottfried Herder and his wife Karoline were concerned, he didn't go far enough: "I could never have imagined Goethe capable of such a sin against history – he turned Mahomet into a vulgar, one-dimensional swindler, murderer and lecher – and against humanity," wrote Karoline Herder in her diary on 31 January 1800.

Unlike Voltaire, whose aggressive manner dealt crudely with opponents, (Johann Gottfried) Herder was able to simultaneously praise and criticise Mohammed because his own image of history was based on the growth and passing of nature.

"His Koran," wrote Herder, "this strange blend of poetic art, eloquence, ignorance, wisdom and presumptuousness is a mirror of his soul, which shows his gifts and deficiencies, his tendencies and errors (...) more clearly than any other Koran of a prophet."

Several years later, when Goethe met Napoleon in Erfurt, the comparison with the Prophet of Islam came to mind once again. Napoleon, who incidentally did not think much of Voltaire's "Mahomet", left an equally fascinating yet menacing impression on his contemporaries as Muhammad did on his.

Ultimately, therefore, it was not Muhammad and Islam as a religion, but Hafez and his poetry that allowed Goethe to identify with the "Orient". What attracted Goethe was not the dogmatic, but the spiritual understanding of religion: "I find it foolish, and quite odd,/That stubborn folk seek to deny:/If 'Islam' means we all serve God,/We all in Islam live and die."

Experience of alienation and estrangement

Karl-Josef Kuschel, who has worked closely with Hans Kueng's Global Ethic Foundation, draws out the cosmopolitan aspects of Islam that were so attractive to Goethe in a comprehensible manner. Hafez is the most important ambassador of this tendency in his cultural sphere, and Goethe, who got his pantheism from Spinoza, picks up almost exactly where Hafez left off.

Even though it is a fact all too readily overlooked today, Islam was actually more geographically widespread than Christianity in the colonial age. During Goethe's lifetime, the poems of Hafez were both recited and emulated from Sarajevo to Istanbul and Delhi. They were part of the thousand-year tradition of "The World of Persian Literary Humanism", as the Iranian-American Professor of Iranian Studies and Comparative Literature Hamid Dabashi describes this culture in his eponymous book from 2012.

In this respect, Goethe's "Divan" is not just part of West-Eastern cultural history, it is also a template for present and future in a world society whose fate is being determined by globalisation. The origins of this globalisation can be found in the Goethe era and manifested themselves in the emerging colonialism of the day and in Napoleon's campaign in Egypt. The inner-worldly estrangement and alienation from the homeland that came with this globalisation had already been experienced by Islamic civilisation in an earlier period, to which the poetry of Hafez – which recognised and reflected on the tragedy of this experience – bears witness.

The Pakistani calligrapher and artist Shahid Alam has illustrated Arabic translations of Goethe's poetry with large, boldly-coloured calligraphy. These are included in the book. The atmosphere of this calligraphy is reminiscent of paintings by Chagall, except that this Muslim variety gets its liveliness not from moving figures, but from sweeping characters. They are a pleasure to behold and recall Goethe's insight that "in no language are word, spirit, and script so primordially embodied as one" as in Arabic.

Already available in German – "Goethe und der Koran", puhlished by Patmos – Kuschel's book is due for release in English by the end of 2021.

In "Iran. Die Freiheit ist weiblich", journalist Golineh Atai describes the dogged resistance of courageous Iranian women against the Islamic Republic and the mullahs who have ... END_OF_DOCUMENT_TOKEN_TO_BE_REPLACED

Egyptian authorities have Mada Masr in their sights once again after critical reporting. But the editor of the country's last independent news source is adamant they will continue ... END_OF_DOCUMENT_TOKEN_TO_BE_REPLACED

Like Christianity, Europe's history is one of migration. Both have strong roots in the Orient and in cultures thousands of years old. Cultural historian Bernhard Braun invites us ... END_OF_DOCUMENT_TOKEN_TO_BE_REPLACED

Russia is leaving no stone unturned in its attempts to make the Islamic Republic an ally in the war against Ukraine. Fortunately for Vladimir Putin, the mullahs in Tehran are ... END_OF_DOCUMENT_TOKEN_TO_BE_REPLACED

Attitudes towards Rohingya people in Myanmar have shifted, due in part to the civil war. But this does nothing to alleviate their misery. By Rodion Ebbighausen END_OF_DOCUMENT_TOKEN_TO_BE_REPLACED

END_OF_DOCUMENT_TOKEN_TO_BE_REPLACED
Social media
and networks
Subscribe to our
newsletter