Kaya Yanar
"What you lookin' at?"

He is of Turkish-Arab descent, studied phonetics, American Studies and philosophy in Frankfurt am Main, and in a matter of no time has become a cult figure as a stand-up comedian in Germany. Kaya Yanar entertains the whole country, in all of its cultural aspects. A portrait by Sabine Pahlke-Grygier

He is of Turkish-Arab descent, studied phonetics, American Studies and philosophy, and in a matter of no time at all has become a cult figure as a stand-up comedian in Germany. Kaya Yanar entertains the whole country, in all of its cultural aspects. A portrait by Sabine Pahlke-Grygier

​​Turks, Arabs, Italians, Indians or Germans, they've all had one thing in common since 26 January 2001. Ever since Kaya Yanar went on the air on Fridays just after 10 p.m. on the private TV channel SAT.1, they all laugh together about their foibles and failings.

Whether as Ranjid, the Indian taxi driver, Hakan, the Turkish bouncer, Yildrim, the Turkish driving school instructor, Francesco, the Italian Casanova or Tarek, the star reporter with the fictional TV channel Dubai 2, his sharp portrayals of ethnic peculiarities are a source of amusement. So much so that sectors of the population he had not picked on in the past, felt grossly neglected. When Greeks complained about this, Kaya Yanar reacted immediately and added the Greek restaurant owner Alexandros Apostolakis to his repertoire.

The channel calls the comedian's show "ethnic comedy", a format that didn't exist before Kaya Yanar. It came as a surprise in the beginning that it worked, but it was also a cause for concern. Was it politically correct to make fun of ethnic groups living in Germany, in their typical slang? Was it acceptable? But the international laughter convinced even the sceptics. Kaya Yanar, who doesn't like to "run anybody down", "wants above all to show people how alike we all are." And it seems as though a "one world sense of humour" really does exist. 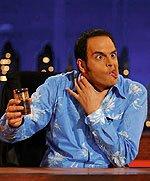 ​​He demonstrates this when Ranjid introduces the viewers, for example, to the secrets of "Tantra", the Indian art of love-making. When Suleyman, who has so far kept his head above water with casual jobs or dubious deals, finds his calling as a radio presenter. When Tarek, who actually should have taken over his father's oil fields at 18, reports on far-away Germany with the cameraman Murat for the TV channel Dubai 2, where he's doing a two-week training course. Or when the crafty driving instructor Yildrim has a hard time with inexperienced learner drivers.

Kaya Yanar explains the reasons why his type of comedy is such a success as being, on the one hand, his authenticity as someone who himself grew up in three cultures, but also the fact that his humour is not "offensive", as he told an Augsburg magazine. "The people he takes the mickey out of – whether German or foreigners – laugh because they see that he's just having them on. It's none of this ‘I'm better than you' type of humour."

His one-man TV show, consisting of stand-up routines, sketches and recordings from international TV programmes, is now in its third series. He has won prizes such as the German Television Prize for Comedy or the Austrian Television Prize in the category "Best Programme Idea". The press loves him: „ ... his integrity, his charisma, believable right down to his toes", according to the Kölner Stadtanzeiger. "Here's someone who makes a fool of himself in commendable fashion by saying what people are really concerned about", observes the Frankfurter Rundschau.

"He avails himself of the right accorded to someone who has grown up in three cultures: he can make fun of everything without for one second appearing to be racist", concludes the Stuttgarter Zeitung.

But the 30-year-old, who likes to tackle "everyday subjects" from "the important to the banal", is also convincing on stage. The Osnabrücker Zeitung, for example, acknowledged that "from start to finish his performance was entertainment of the highest quality."

END_OF_DOCUMENT_TOKEN_TO_BE_REPLACED
Social media
and networks
Subscribe to our
newsletter