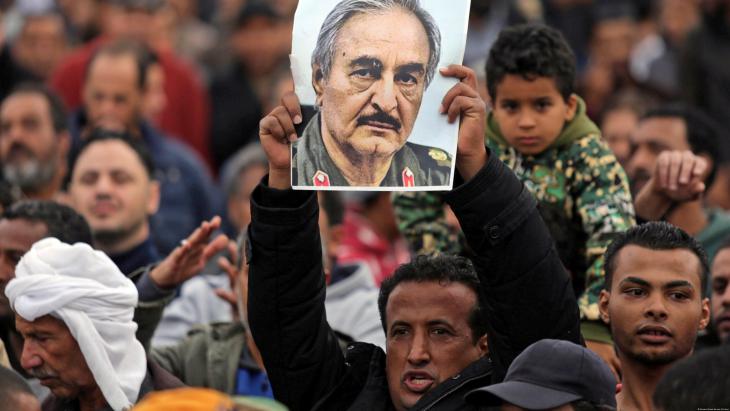 The news that General Khalifa Haftar had been rushed to the military hospital in Paris on 5 April 2018 for the treatment of a serious health problem caused a variety of reactions in Libya: shock and anxiety on one side; jubilance and rejoicing on the other. To his supporters, he is the "Saviour of Libya"; to his adversaries, the "new Gaddafi". Farag Al Esha provides a portrait of this controversial figure

It was obviously a close call. The Islamist media in Doha and Istanbul spread the news of his certain death, quoting Arab and foreign media, most notably the French newspaper Le Monde, which is renowned for its serious reporting. A few days later, however, the French Foreign Minister Jean-Yves Le Drian announced that Khalifa Haftarʹs health had improved.

So who is this general, news of whose illness and rumours of whose death attracted such attention from the Arab and foreign media, not to mention in political circles? Ever since he led "Operation Libyan Dignity" in Barqa (Cyrenaica) in eastern Libya to fight the so-called Islamist terrorist militias, he has been the most controversial figure in Libya.

Khalifa Belqasim Haftar was born in 1943 in Ajdabiya, west of Benghazi. He graduated from the Royal Military College in 1966 and participated as a lieutenant in the coup that brought Gaddafi to power in September 1969, rising to the rank of colonel in 1980, subsequently becoming commander of Libya's ground forces.

In 1987, on the orders of the dictator Gaddafi, he led a major campaign to invade Chad and secure a change of government there. The campaign ended in a humiliating defeat for the Libyan army and the capture of Colonel Haftar and hundreds of his officers and soldiers by Chadian forces.

American intervention with the Chadian President and his French allies meant the Libyan prisoners were given the choice of returning to their own country or relocating to the United States. As it turned out, very few of them opted to return to Libya, with most re-settling in America. Top of the list of those who headed to America was Colonel Haftar, who made Virginia his new home.

There, Haftar joined the Libyan opposition under the auspices of the "National Front for the Salvation of Libya" and served as "commander of the national army". He worked secretly from his place of exile with senior officers inside Libya to stage a military coup. In October 1993, just a few days before the plan was due to be implemented, the plot was discovered, and its leaders were arrested.

It appears that as a result of the coup's failure and his disagreement with the opposition "Salvation Front", Haftar broke away. He accepted reconciliation with the Libyan regime under the aegis of Egypt, with the guarantee of residence for him and his family in Egypt – on condition that he refrained from any political activity against the Gaddafi regime. 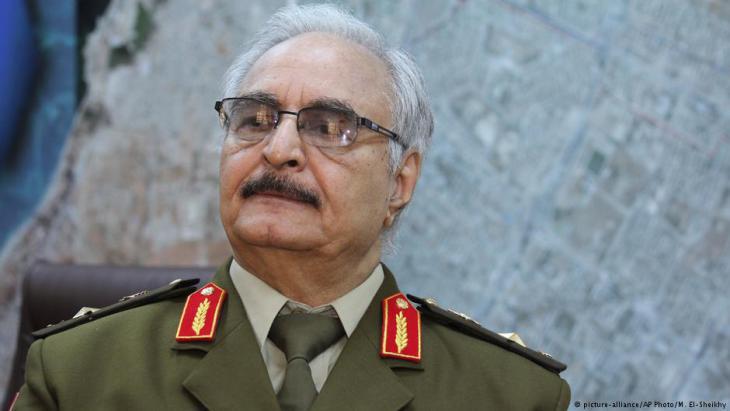 Libya's "new strong man": General Khalifa Haftar (pictured here) lives in the eastern Libyan city of Benghazi where the armed uprising against Libya's former dictator, Muammar a-Gaddafi, began. In the past, the general has threatened to advance on the capital with his army on a number of occasions. His troops control large parts of eastern and central Libya

From fictitious coup to leadership of military operations

In the wake of the 17 February 2011 uprising, which quickly turned into an armed rebellion against the Gaddafi regime and coincided with the collapse of Hosni Mubarakʹs regime in Egypt, Colonel Haftar travelled cross-country to Benghazi, only to find General Abdelfattah Younis (Gaddafiʹs interior minister) leading the rebel forces made up of regular soldiers and civilian volunteers.

The two men became embroiled in a bitter struggle for control of the forces, and General Haftar was excluded from playing any practical role in the military leadership.

Then, out of the blue, on the evening of 14 February 2014, he appeared on the Saudi-owned television channel "al-Arabiya" and announced in a recorded statement that he had taken control of military and other key sites in the capital. He went on to announce that the work of parliament and the government had been suspended and presented what he called a "road map" for Libya's political future. It was somewhat reminiscent of Sisiʹs approach, albeit without the support of a strong, disciplined army such as the Egyptian leader enjoyed.

But Haftarʹs coup statement was pure fiction; a virtual coup. After the Zintan militia, on which he had been counting, abandoned him, he didn't have a single soldier on the ground. But he persevered. Three months later, in May 2014, he appeared in Benghazi leading a military operation involving several hundred soldiers and officers of the Libyan army under the name "Operation Dignity" (al-Karāma) against armed Islamist groups that were controlling Benghazi and were regarded by most of the city's population as terrorist groups, responsible for hundreds of assassinations of army and police personnel and civil activists.

"Operation Dignity" quickly attracted an increasing number of military and volunteers, and Colonel Haftar became the saviour for whom the vast majority of people – at least in eastern Libya – had been waiting.

By contrast, the Islamist militias in the west of the country joined forces in Tripoli and Misrata to confront General Haftarʹs offensive. The latter had already managed, with the support of Egypt and the United Arab Emirates, to eradicate the Islamist militias in Benghazi and the entire province of Barqa (Cyrenaica). All that remained was a pocket of resistance in the small town of Derna. 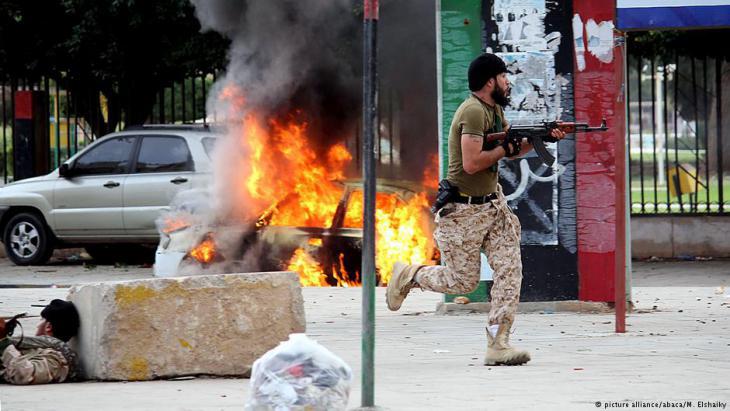 Bitter struggle for power in Libya: no less than three governments and countless militias are currently battling for control of the oil-rich north African country. The authority of the internationally backed national unity government is opposed by another government that rules the east of the country with the support of Haftar's self-titled Libyan National Army

Using the military to bring down political Islam

Haftarʹs forces seized oil terminals and he became, as Le Monde described him, the "strong man of Barqa". Not content with that, the general himself was shaping up to be the strong man of Libya, uniting the military establishment and taking control of the capital Tripoli by means of a temporary military council to oversee a new political transition.

But his sudden illness and the silence over his health has raised questions and precipitated a public debate in Libya about the fate of his military movement ("Operation Dignity") and its political project to govern Libya. Would the countries that support him (Egypt, the UAE, France ...), support his successor? And anyway, who could step into his shoes?

As an observer of events from within the eastern region, it is clear to me that Haftarʹs absence will create a vacuum in the army's high command. A man of charisma, Haftar has cultivated close relationships with both his regional allies (Egypt and the UAE) and those further afield (France and Russia).

Moreover, his military project ("Operation Dignity") to eliminate terrorism and overthrow political Islam through tight control of a unified military is likely to forfeit much of its focus when he does step down. Supporters and opponents alike agree that the initiative is very much allied to him as an individual. 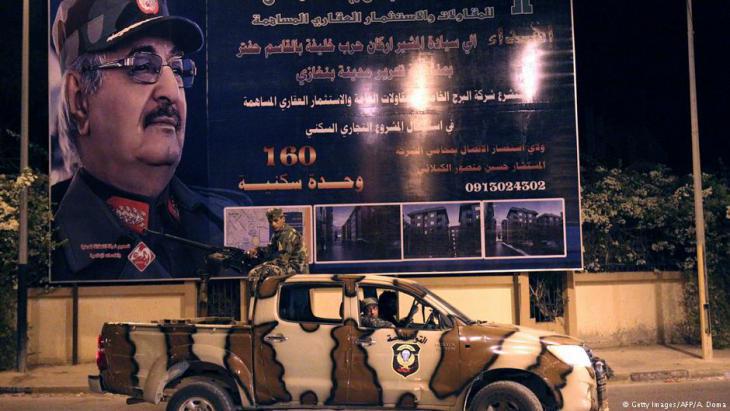 Haftar's Libyan National Army stands accused of having killed captured jihadists on several occasions in recent years. In August 2017, the International Criminal Court issued an arrest warrant for the commander of a Libyan National Army special commando, Mahmoud Al-Werfalli, who is suspected of having either shot at or ordered the execution of civilians or injured fighters. Haftar's army responded by saying that the accused had already been arrested and would face a court-martial

Libya's saviour or the new Gaddafi?

He enjoys almost cult-like status among his supporters, who refer to him as the "Saviour", while his Islamist opponents demonise him as a "new Gaddafi". They accuse him of leading a counter-revolution against the "17 February Revolution", considering themselves to be the true protagonists and the divinely appointed guardians of the latter. Indeed, the Islamists believe that any withdrawal of Haftar from the political stage is likely to hasten comprehensive political consensus, guaranteeing them the lion's share of power.

As for his supporters, there are serious concerns that disagreements will erupt between eastern and southern military leaders over succession. There are also rumours that Egypt and the UAE may intervene to impose a successor of their choice.

Despite the possibility of armed clashes and isolated assassination attempts during the struggle over succession, a close reading of events suggests that, thanks to the strong social fabric in Barqa, things are unlikely to descend into a barbaric tribal conflict. This long tradition of social cohesion has worked to repudiate the Islamist groups, negating both their attempts to establish a monopoly of power and their terrorist practices.

In the absence of General Haftar, I believe that a new army commander will be appointed with the approval of the House of Representatives in Tobruk. And the next battle will therefore be the storming of Derna and its liberation from the last Islamist militia in the east of the country.

The term "Tuareg" refers to tribes and nomads who speak dialects of Tuareg and live in Targa, an area in south-west Libya recently renamed Wadi Al-Hayat but previously known as ... END_OF_DOCUMENT_TOKEN_TO_BE_REPLACED

The Islamic Republic has been unable to quell the civil unrest that erupted three months ago, after Mahsa Amini died after being detained for violating hijab rules. Now the ... END_OF_DOCUMENT_TOKEN_TO_BE_REPLACED

Cries of "Benghazi!" still resonate across the USA ten years after a deadly terrorist attack in Libya killed the U.S. ambassador and three other Americans. Ethan Chorin re-tells ... END_OF_DOCUMENT_TOKEN_TO_BE_REPLACED

After a two-year hiatus, the Arab League re-convened at the beginning of November in Algiers against a backdrop of uncertainty and discord. By Pierre Boussel END_OF_DOCUMENT_TOKEN_TO_BE_REPLACED

In the run-up to the COP27 global climate summit, hosted by Egypt in November, it is worth noting that little rainfall, aggressive heatwaves and worsening drought make the Middle ... END_OF_DOCUMENT_TOKEN_TO_BE_REPLACED

The southern shores of the Mediterranean Sea are losing sand faster than almost anywhere else. The ecological and economic damage is immense. The good news is, there are ways to ... END_OF_DOCUMENT_TOKEN_TO_BE_REPLACED
Author:
Faraj Alasha
Date:
Mail:
Send via mail

END_OF_DOCUMENT_TOKEN_TO_BE_REPLACED
Social media
and networks
Subscribe to our
newsletter