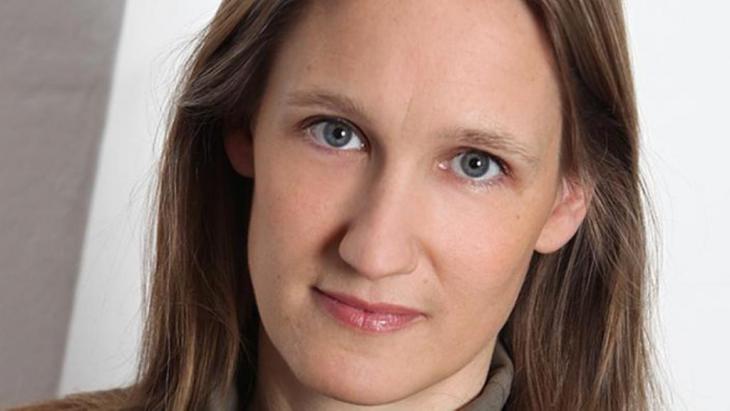 At the recent EU summit on refugees, German Chancellor Angela Merkel announced that she was willing to take part in talks with Syrian President Bashar al-Assad. In an interview with Wolfgang Dick, Middle East expert Kristin Helberg warns against misinterpretation

To what extent would Assad, who is seen as war criminal in the West, agree to such direct talks?

Kristin Helberg: The Assad regime has been taking part in negotiations since 2012. In this respect, Merkel hasn't really said anything new. Negotiations with the Assad regime have been taking place on a regular basis. These are conducted by Staffan de Mistura, the United Nations Special Envoy for Syria. He regularly travels to Damascus. There′s no question that Germany is seeking a political resolution and that this is being pursued by its federal government. It′s nothing new.

That′s not to say that Assad is being accepted as a partner, for example, against "Islamic State", or as a partner in talks about refugees. That is not what Merkel said and I don't think it is what she intends to do.

Why has the dialogue not got us anywhere until now?

Helberg: If you speak to the representatives who took part in the talks in Geneva and Montreux, they often say that the Syrian regime has torpedoed all progress because Assad himself and his people have no reason to talk about a change of power as they still have enough international support - mainly from Iran and the Lebanese Hezbollah, who fight on Assad's side. Moreover, Russia has been holding its protective hand over Syria in the UN Security Council. No matter how weak Assad is in the country itself, this support has not led him to make any compromises.

Merkel's latest statements give the impression that Assad could contribute to a resolution. How much authority does he have in his country? 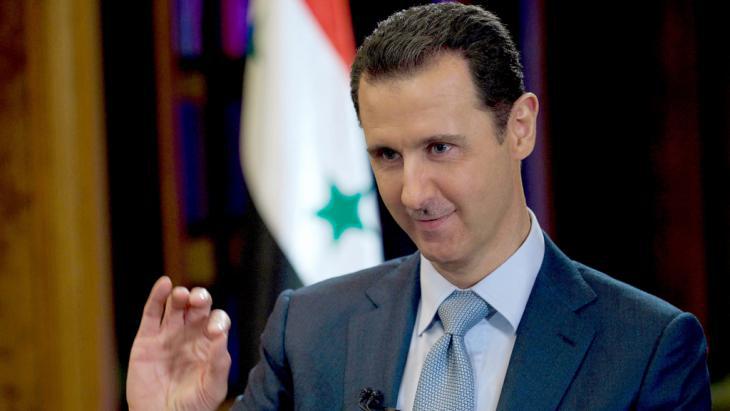 With his back to the wall: "Bashar al Assad is militarily very weak in his country. He is only able to hold his territory - the centre of Damascus and the coastal region – with the massive support of Iran, Hezbollah and Russia," says Helberg

Helberg: Bashar al Assad is militarily very weak in his country. He is only able to hold his territory - the centre of Damascus and the coastal region – with the massive support of Iran, Hezbollah and Russia. That means he actually cannot offer much in the way of an alliance in the battle against IS. Moscow would like to forge such an alliance but that would be a mistake, because Assad has not been fighting IS; on the contrary, he has been fighting on the IS side against all the other groups, and mainly moderate rebel groups.

The international alliance needs ground troops. But who is fighting on the ground against IS? Not Assad's forces - they would probably run away from IS. The Syrian army has disintegrated.

Is the idea of speaking with Assad a completely wrong approach?

Helberg: Someone must speak to Assad about handing over power. Assad must understand that this country will not stabilise. He can no longer control the situation and no one in Syria wants IS. We need a third option, an alternative to Assad. That is why he must be integrated in the conflict resolution process and regime representatives are needed at the table.

But turning to Damascus to solve the IS problem is a completely wrong approach. Assad's bombs gave life to IS in Syria. People have been radicalised and ultimately, view IS as a protector of Sunnis. Assad's air strikes on cities, like Aleppo, or the targeted infrastructure attacks, were fatal. His assaults killed seven times more civilians than IS has.

That is the main problem, which has caused the flow of refugees and the strengthening of IS. We need a political transition to combat IS. In order for Syrians to unite in the fight against IS and for an alternative to Bashar al-Assad, they can no longer be bombed from the air. Protection zones for civilians and no-fly zones must be created. 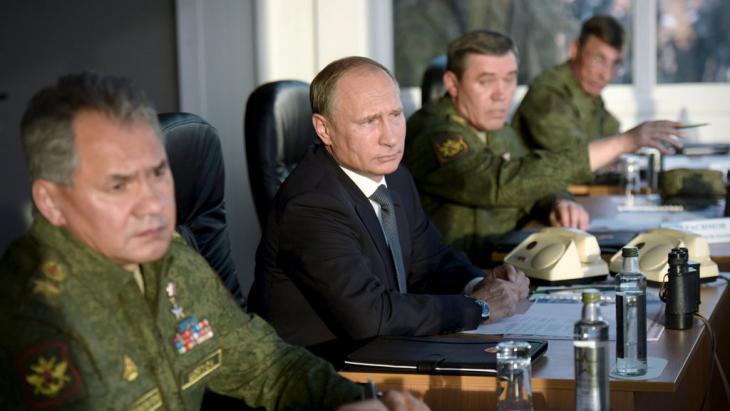 Russia lends a helping hand to Syria′s tottering dictator: while the West pushes for Syria′s Bashar al-Assad to step down, Russia remains a key long-standing ally. According to information supplied by the Stockholm International Peace Research Institute (SIPRI), Russia has conducted over 1,500 weapons deals with Syria since 1992. Since the onset of the civil war, the number of consignments has increased considerably. The only other country known by SIPRI to supply arms to Syria is Iran

What must be done to find an answer?

Helberg: Parallel to diplomatic efforts, on which especially German Foreign Minister Steinmeier has been banking, we need military pressure. As long as Assad feels safe and has no reason to relinquish power, he will not change anything. No-fly zones would be a measure to force him to the negotiating table. We'd have to convince Russian President Putin to agree.

Strategically, it would be better to negotiate with Russia, not about a Putin plan, but instead about an alternative to Assad, in order to take action together against IS.

Opposition groups in Syria have a roadmap for a transitional period and for a change of power in Syria. A transitional government without representatives of the Assad regime is the goal, but the opposition will only negotiate a real transfer of power.

The German chancellor named Assad as one of the many players involved. In your opinion, which players should definitely take part in the talks?

Helberg: All players involved in the conflict must sit at the table. They are definitely Iran, which is running Assad's struggle for survival in the country; Russia; and other regional powers such as Saudi Arabia and especially Turkey, which has been strongly affected by this conflict. The most difficult one will be Iran. It is interested in maintaining the lifeline of the Lebanese Hezbollah. That's why they need Assad. No one in the opposition is willing to fulfil this interest. It would probably be easier to satisfy Russia's interest in preserving power in the region.

Is there a risk of Russians disrupting the talks?

Helberg: Any statement made by a Western politician showing a willingness to talk pleases Putin because he thinks that his calculations will pay off in the end, meaning it will keep his allies - and his protege Bashar al-Assad - in power. But I believe that Russia is gathering facts for the period after Assad in Syria. Whoever comes to power must reckon with Russia because its military presence there is now so great that there is no way around co-operating with Russia.

Many Turks are dissatisfied with the international status of their country. At the same time, opinion polls reveal great scepticism among the Turkish population towards the USA. ... END_OF_DOCUMENT_TOKEN_TO_BE_REPLACED

Very different Western reactions to the suffering in Ukraine and the Arab world show that there is a profound rift among cultures. Essay by Michael Young END_OF_DOCUMENT_TOKEN_TO_BE_REPLACED

Since Spain abandoned its traditional neutrality towards the conflict in Western Sahara, Morocco has announced a "new phase" in relations between the two countries. But what is ... END_OF_DOCUMENT_TOKEN_TO_BE_REPLACED

Tunisia's president has been carrying out a coup by degrees, demolishing the country's hard-fought democratic gains bit by bit. With an economy in turmoil and a splintered ... END_OF_DOCUMENT_TOKEN_TO_BE_REPLACED

From the Euphrates to the Mekong, dams that ensure one country's water supply risk leaving others parched. But shared water resources can be a source of peace as well as conflict ... END_OF_DOCUMENT_TOKEN_TO_BE_REPLACED

Middle Eastern countries are still on the fence when it comes to the Russian invasion of Ukraine. Their citizens point to the West's double standards surrounding conflict and ... END_OF_DOCUMENT_TOKEN_TO_BE_REPLACED

Comments for this article: ″We need an alternative to Assad″

All arguments about Assad to leave and relinquish from power are kind of fabricatet,To say that the syrian people leaving their country caus of Assad is hard to belive .Syria was one of those countries where all ethnic groups lived since thousand of years together in almost peace.Also since Assad came to power and before the demonstrations in 2011 he was even tryieng to reform the country and suddenly the demonstrations begunn in the city of DARA near Jordan border,also suddenly people had weappons all over.Where did they get them from ? There are many videos on "you Tube" you can see that some people where shooting from roofs at the normal people and trying to panic them,Who can you trust in these days?May be fanatic groups whre involved or even some intelligence sources to divide the country not in purpose to go for the fanatic islamist but to heat the athmosphere up to a civil war.One main reason is IRAN and his ties to Hisbollah in Lebanon,to cut that off,the direct route between Iran Irak and >Syria to Lebanon,This plan was discussed before,even some years,but now the ISIS is showing up and the plans are not more foreseeable a dangerous situation.Of course Assad is fighting a war with many losses at one side with radical forces on the other side the FSA and some otjhers,he has to and any other Leader would do also instead of giving up or retreat,Millions of peoplke leaving Syria and the media says caus of Assad,this is a kind of propaganda,People are leaving the country because there are no city and villages no mor exept Damaskus and the coast Line,they have to live somewhere ?What should they say ?And even if they mention Assad as a reason is caus of getting a status of political refugee abroad,so they say we suffered from Assad !But they suffer from War in the country,a war which nobody knows who it begunn and why ! Who belives that Assad startet a civil war in his country caus of some demonstration and some radicals in it ? I think they forced him into this situation,Just to say he is one of the worsest dictators in present time is not beliveable, And even if he leaves,who is going to come ?Are you going to make elections in a civil war ?Or you want to try the Afghanistan plan and install someone like Karzai,as the US recomendet and did so ?What if the country is going to be worse ? who is going to take the responsibility ? And the war wih ISIS is going to spread out getting to Israel Border ? So getting rid of Assad is not the question.And after ??

We (?) need an alternative to Assad. May be, but where is this alternative?
After 4 years of war, the moderate opposition has been crushed between the jihadists (ISI, Al-Nosra) “protecting” the Sunnis, and the Assad’s regime “protecting” the minorities (Christians, Shiites, Alawites..).
Where is now the Syrian government in exile formed in Paris in 2011?
Where are now the 5000 Syrian fighters trained by the US?
The politic, from the west, of building, supporting, arming an “acceptable” opposition to Assad, has completely failed, and it’s more than time to stop dreaming about it: the only alternative to Assad is now ISI and Al-Nosra (Al Quaïda), and the elimination of all non-Sunnis from Syria.

END_OF_DOCUMENT_TOKEN_TO_BE_REPLACED
Social media
and networks
Subscribe to our
newsletter