Blues from the Mountains

Emancipated from protest music: Kurdish musicians Aynur, Nilufer Akbal and Rojin bring new tones to the music scene in Turkey and open Kurdish music up to new influences, to European and international sounds. By Daniel Bax 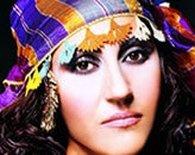 ​​The music film "Crossing the Bridge," shown in German theatres last year, goes searching for the sounds of Istanbul. One scene is set in an old hamam, a Turkish bath. The director Fatih Akin, from Hamburg, meets the Kurdish singer Aynur as she is rehearsing a song.

The acoustics of the bathhouse, with its elegant domed ceiling, make the song she sings particularly penetrating. And her story falls outside the usual perimeters of music anecdotes. Aynur came to Istanbul as an outsider, but now she has become part of the city's music scene.

A new sound in Turkey

Aynur Dogan is perhaps the most recognizable of many Kurdish singers who are creating a new sound in Turkey. She was born in the southeast corner of the country in the Kurdish-influenced region of Tunceli, where she grew up with the traditional music, the myths and the poetry of the Alevites, a religious minority that are still very present in everyday life there.

In the wake of the civil war, which escalated in the 1990s, whole villages were forced to move to the western side of Turkey. In 1992 Aynur's family also moved, to Istanbul, where she then attended the music school of Arif Sag, who is known as the guru of saz, the traditional Turkish instrument.

In recent years the albums "Seyir" and "Kece Kurdan" have earned her a reputation that extends beyond Kurdish circles and has even commanded international admiration. The British magazine "Folk Roots" put her on their cover in 2004, and the "London Time"s used her photograph to illustrate a supplement on the musical gems of Turkey.

This is somewhat ironic, given that not long ago Kurdish music was strictly forbidden in Turkey. Any Kurd who aspired to a career in music sang in Turkish and steered clear of politics. Those who did sing in Kurdish typically went into exile in Western Europe and produced cassettes that only passed secretly from hand to hand in Turkey.

It was only four years ago that the last remaining bans were lifted that had held back Kurdish music. But since then, a lot has happened. Modern Kurdish songwriters such as Aynur, Nilüfer Akbal or Rojin, who have even made their way into radio and television, are only the most visible signs of the progress.

Along the way, all three of them have broken out of the prescribed roles: They cannot be classified as purely ethnic folk musicians, nor do they try to make a political statement with their music, which had long been the prerogative of Kurdish music.

Aynur and her sisters understand themselves as modern singers and songwriters following a Western tradition. They do sometimes turn back to old traditional Anatolian wanderers' songs. But they also open Kurdish music up to new influences, to European and international sounds.

Aynur is the musician who has remained closest to Kurdish traditions. Yet she has refined the somewhat outdated repertoire and her own compositions with a seasoned world music aesthetic, by implementing a wide spectrum of acoustic folk instruments.

Bass and percussion lend the spare and elegiac ballads a hint of jazz. The heavy blues from the Kurdish mountains thus take on a certain cosmopolitan flair when she performs them.

Nilufer Akbal, who lived in Germany for a time, is more oriented toward Western models. At the beginning of her career, when she would walk on stage with only a guitar, she gave the impression of a Kurdish Joan Baez.

But on the cover of her new album, she is hardly recognizable as the same woman: The look is pure pop, and little distinguishes her from other Turkish singers. And the music itself, which borrows from reggae, pop and jazz, sounds rather debonair. Nilufer Akbal thus mirrors the mood of urban Kurds.

The singer Rojin, on the other hand, has been more influenced by Turkish music; her album is almost half Turkish language songs and half Kurdish. Her biography rivals the classic Cinderella story: she was born in extreme poverty and quasi banished by her father because she took control of her own life. This is also a Kurdish reality that these new singers are trying to distance themselves from.

As a result, in the Turkish press they are granted a certain bonus for their exoticism. Compared to the male Kurdish musicians, they are a new phenomenon—and thus garner more attention. This does not mean, however, that there is no resistance to their work.

The latest album by Rojin would have been on the market much earlier if they hadn't been threatened with a law suit because of one of the Kurdish songs, which pushed back the release date. But even after the release, the Turkish music broadcaster "Kral TV" refused to play her music clips.

Aynur was also on the blacklist for a while. More than a year after her album "Kece Kurdan" was released, a provincial court in Dyarbakir ruled that it should be banned from the market in Turkey.

The reason given was that the title piece, "Kece Kurdan," a song about taking command of one's own life, "encourages young women to go into the mountains and join the Kurdish resistance," according to the judges' interpretation. It was only in September 2005 that the decision was annulled by a higher court.

Fatih Akin's "Crossing the Bridge"
Grunge, Punk and HipHop on the Bosporus
In his new film "Crossing the Bridge – The Sound of Istanbul," Turkish-German director Fatih Akin embarks on a musical search for traditions. The result is a glowing homage to Istanbul's vibrant, diverse and inspiring music scene. By Petra Tabeling

Sufi DJs and Sultan Techno
A Foray into the Modern Music of Istanbul
Nowhere in the Islamic world does the Orient coexist so well with the West. The music scene in the metropolis is a good example. It offers a natural blend of Turkish traditions and Western urbanity. By Stefan Franzen

END_OF_DOCUMENT_TOKEN_TO_BE_REPLACED
Social media
and networks
Subscribe to our
newsletter