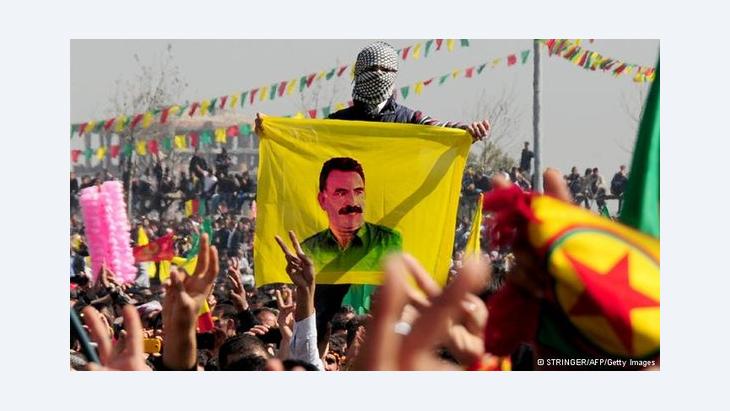 After three decades of war, Turkey and the Kurdish separatist PKK outfit are close to implementing a ceasefire. The first PKK fighters have already begun leaving Turkey for safe havens in Iraq. Birgit Svensson reports

"Najiba" is standing at the foot of the 5,000-year-old citadel in Irbil in Iraq. She's collecting signatures to campaign for the release of Abdullah Öcalan, the founder of the Kurdistan Workers' Party (PKK), who is imprisoned in Turkey.

Like many members of the PKK who decided to join the guerrilla war against Turkey, she's given up her civilian life to join the PKK separatist movement. Najiba is a member of the Kongra-Gel, or the Kurdish people's congress – the political arm of the PKK.

Dressed in a light-blue denim shirt and wearing a baseball cap backwards on her head, Najiba looks like an ordinary politically active teenager. Only her grey military trousers hint at her past. Until recently, the 22-year-old Turkish national lived in the mountains in Iraq, close to the border with her Kurdish homeland.

Signs of a truce

The Qandil Mountains of Iraq have long served as a safe haven and operational base for the PKK guerillas. From the rugged base, they've carried out attacks on Turkish cities and facilities.

​​But there is still plenty of wariness over the truce, on both sides. Several previous ceasefire attempts between the two sides have failed. The PKK says it will immediately halt the withdrawal of its fighters if it's attacked while retreating. In 1999, the Turkish army attacked the fighters during a planned withdrawal, killing 500.

"Now our people only cross the mountains on foot, and only move at night," Najiba said. The withdrawal is expected to take up to four months.

The Kurdish part of Iraq is the safest sanctuary for former PKK fighters. Among all the countries where Kurds live – including Turkey, Syria, Iran, and Iraq – Iraq is the place where they've managed to do the best for themselves.

The largely autonomous Kurdish part of Iraq is undergoing an unprecedented boom. It's emerged as an economic hub, attracting over $5 billion in direct foreign investment in 2012. The population of the capital city Erbil has grown to 1.5 million – double what it was a decade ago.

Iraqi Prime Minister Nuri al-Maliki, who heads a Shiite coalition in Baghdad, has criticized the region for taking in PKK fighters, saying they pose an inestimable risk. But that doesn't seem to worry Massoud Barzani, the acting president of Iraqi Kurdistan. The 66-year-old has played a large role in the withdrawal of PKK fighters from Turkey.

Barzani was given a red-carpet welcome when he travelled from Erbil to Ankara at the end of April. The Turkish media spoke of a historic change in the three autonomous provinces along the Turkish-Iraq border.

This change is also due to the bloody civil war in Syria, which is posing a serious threat to the geostrategic balance in the region.

The alarm has been sounding in Ankara ever since the regime in Damascus tried to use the PKK for its purposes, allowing it to set up operations in the northeast of Syria.

Following the fall of Saddam Hussein in Iraq, the PKK set up a few camps in the Qandil Mountains – along the border of Iraq and Iran and near Turkey – for 5,000 of its fighters. Kurds in Iraq continue to be thankful to the PKK for its support in their fight against the Iraqi dictator.

Turkish Prime Minister Erdogan demanded – in vain – that Barzani expel the fighters. Barzani refused to relent, also after Ankara launched air attacks against guerrillas in the desert border regions of Iraq. As a NATO power and during its occupation of Iraq, the United States five years ago managed to avert a threatened march by the Turkish army on the border area Zakho.

In the meantime, the Kurdish regional government in Erbil has taken on the role of mediator for the Syrian-Kurdish opposition against Assad. Barzani's Kurdish Democratic Party is not only organizing regular consultations, but also managing border traffic to Syria in the north. Erdogan and Barzani have apparently teamed up in their fight against al-Assad in Damascus.

Since returning to power in Afghanistan, the Taliban have steadily eroded the rights and opportunities of women and girls, particularly their access to education. But Afghans are ... END_OF_DOCUMENT_TOKEN_TO_BE_REPLACED

The book "The Invention of the Maghreb: between Africa and the Middle East" prompts us to review basic terminology. This includes terms that we use almost every day as if they are ... END_OF_DOCUMENT_TOKEN_TO_BE_REPLACED

Tunisia has been going through a severe economic and political crisis in recent years. More than one in three young people there are unemployed. For many skilled, qualified and ... END_OF_DOCUMENT_TOKEN_TO_BE_REPLACED

At the end of every year, the team at Qantara.de gives you a run-down of the ten most-read articles on the site over the past 12 months. Here is a quick overview of the stories ... END_OF_DOCUMENT_TOKEN_TO_BE_REPLACED

The government in the Netherlands, one of the last European nations to abolish slavery, has made an historic apology. But some feel that there is still a long way to go. By Ella ... END_OF_DOCUMENT_TOKEN_TO_BE_REPLACED

To celebrate the bicentenary of the deciphering of the Rosetta Stone, the British Museum is running an exhibition entitled "Hieroglyphs: unlocking ancient Egypt" until February ... END_OF_DOCUMENT_TOKEN_TO_BE_REPLACED
Author:
Birgit Svensson
Date:
Mail:
Send via mail

END_OF_DOCUMENT_TOKEN_TO_BE_REPLACED
Social media
and networks
Subscribe to our
newsletter