American journalist and Pulitzer Prize-winning author Lawrence Wright makes the history of Islamism sound like a political thriller. Andrian Kreye has read the book, which is considered by experts to be the definitive work on the prehistory of 9/11

"Why do they hate us?" the New York Times asked after 9/11. In "The Looming Tower", Lawrence Wright offers explanations

​​Some stories simply have to be told more than once. One such story is that of the sheer irresistible attraction of Islamism, which began to ferment in Cairo in the 1930s and came to a head for the first time in New York on 9/11. Hardly anyone understands this story as well and can tell it as brilliantly as Lawrence Wright, staff writer at the American weekly magazine The New Yorker.

Wright may not have been the first author to tell this tale, but his book, "The Looming Tower: Al Qaeda and the Road to 9/11" is nonetheless a milestone.

Not a natural born entertainer

It is also quite literally an event. Last summer, Wright took to the stage and presented the results of his research as a performance. He may not be the most gifted of entertainers, but every time he set foot on the podium of the Culture Project Theatre in New York's Soho and told of the intrigues in the ranks of al-Qaeda, the FBI, 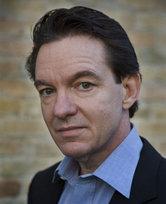 Skilled guide through a strange and frightening world: Lawrence Wright

​​and the CIA, and spoke of the hundreds of interviews he conducted when researching his book, the bumbling man in a tank top became a skilled guide through a strange and frightening world.

When he won the Pulitzer Prize last spring, he took his evening performance - entitled "My Road To Al Qaeda" – to the concert hall in the town hall on Times Square for one night only. Some 1,500 people came to hear what he had to say. Here too, Wright demonstrated the magnetism of his narrative.

Initially, it is very hard to believe that the war on terror began with the disappointed love of a literary critic from Cairo who owned one of the largest classical record collections in the Middle East.

Sayyid Qutb, the critic in question, was a member of the Muslim Brotherhood. A frail man, the works he wrote in the 1950s and 1960s made him one of the masterminds of Islamism. However, it was not a Holy War that fanned the flames of his hatred for the West, but a luxurious study trip to America, where he explored New York and studied English in Washington and Colorado on a scholarship from the Egyptian government.

Wright describes Qutb, who was executed in 1966 on the orders of President Gamal Abdel Nasser, as a model Islamist. An educated man who was well-versed in Western culture, Qutb was also a tormented, proud, and self-righteous intellectual who was torn between the Arab and the Western world and between faith and modernism. Eventually his hatred of the secular world overrode these other sentiments.

It was Qutb who wrote the texts on which Islamism was built. Milestones, Social Justice in Islam, and In the shade of the Qur'an are all mightily eloquent tracts in which he conjures up images of a new generation of holy warriors that would take up arms in order to create a just world governed by the Sharia.

One chapter is all that Wright needs to paint a complex portrait of the ideologist who was capable of putting the feeling of humiliation into such powerful and moving words that he laid the foundation of an ideology in which the eternal battle between idealism and nihilism gave birth to the murderous phenomenon that is international terrorism.

​​In this way, Wright skilfully sets the scene in the dusty suburbs of Cairo for his description of the complex relationships between the men who fashioned a global movement out of this inauspicious brand of sectarianism. Herein lies the strength of the book. Lawrence Wright does not analyse, he narrates.

Naturally, the main focus of the book is on the two men who have gone down in history as the masterminds behind al-Qaeda, the Egyptian doctor Ayman al-Zawahiri and the Saudi heir Osama bin Laden. Wright deftly dissects the taut relationship between the two. On the one hand, we have the ideologist al-Zawahiri, who has experience of combat, and on the other, the ambitious and charismatic Bin Laden. F

rom the time of their first encounters in Pakistan in the 1980s to the training camps in Afghanistan, the two operate in the grey area between idealism and nihilism that makes violent Islamism so seductive for so many.

Wright also sheds light on key American players in the story. He describes John O'Neill, the choleric head of the FBI's New York office, and an ensemble of bureaucrats and agents whose successes fall between the cracks of the rivalry between the FBI and the CIA.

One of the most depressing scenes in the book recalls the moment on 12 September 2001 when FBI agent Ali Soufan realised that the authorities had known for some time that the terrorists were in the country. His disgust and shock was so great that he had to throw up.

Prophetic dimension of the screenplay

It is no coincidence that Lawrence Wright can tell the story of Islamism so formidably. Wright is not only a journalist, but also a screenwriter. One of his screenplays, "The Siege", was filmed in 1998 starring Denzel Washington and Bruce Willis. The Siege tells the story of an Islamist bomb attack on the city of New York. Following the attack, a state of emergency is declared and all civil rights are repealed.

Wright was well aware of the prophetic dimension of his screenplay. "This is my film," he said to himself after 9/11 as he begged his editor, David Remnick, to put him on the story.

The articles that Wright published in The New Yorker in the years that followed laid the foundation for his book. However, he goes much, much further in "The Looming Tower".

No-one could have described the deadly consequence of the relationship between al-Zawahiri and Bin Laden, the destructive sleaze of the American authorities, and above all the spiritual, ideological, and cultural world of Islamism as accurately and in such a masterfully unideological way as Wright. He has long been considered the leading expert on the subject in the USA and his book as the definitive work in this field.

This article was previously published by the Geman daily, Die Süddeutsche Zeitung.

Five-Year Commemoration of 9/11
The Primal Scene of a Global Confrontationv
September 11 marks the start of a logic of escalation. Even those of our generation understand how such an escalation begins and how it continues to spiral upwards. What we still don't know is how it can be stopped, writes Robert Misik

Islamism in the Past and the Present
From Anti-Colonialism to Global Jihad
What are the roots of political Islam and what are the ideological tenets and goals of radical Islamic activists in Muslim countries? Franz Kogelmann provides an historic overview

END_OF_DOCUMENT_TOKEN_TO_BE_REPLACED
Social media
and networks
Subscribe to our
newsletter