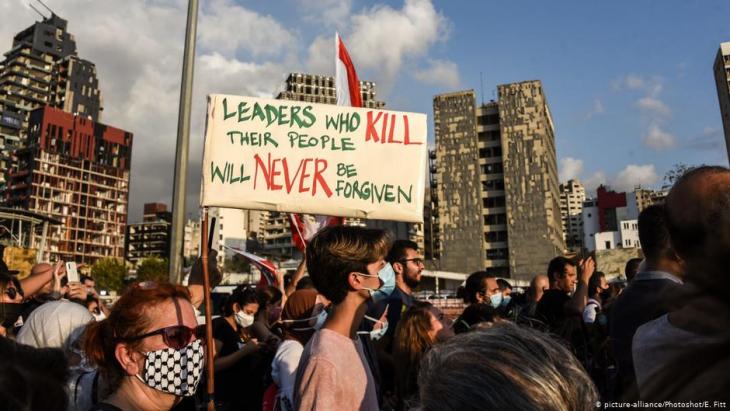 Lebanese protesters call for systemic change
What now for Beirut, once the Paris of the Middle East?

The destruction of the port of Beirut – and Lebanon's free-falling economy – has fuelled calls to end the country's sectarian political system, which allocates power among Christians, Shia, and Sunni Muslims according to a rigid formula. But might such a change merely deepen suspicion among an already deeply divided population? by John Andrews

Haram Lubnan, poor Lebanon. As if hosting more than a million refugees from the Syrian war next door, an economy in free-fall, and COVID-19 weren’t enough, now the catastrophic destruction of the port of Beirut has left more than 150 dead, over 6,000 injured, and some 300,000 – 5% of the population – homeless. What can end this tale of woe for a country whose capital once saw itself as the Paris of the Middle East?

Sadly, that image is long gone, destroyed by the 1975-90 civil war, corruption, and regional turmoil. The hapless government called a state of emergency in the wake of the port blast, only to be confronted by demonstrators chanting the slogan that almost a decade ago sparked the Arab Spring: al-sha’b yurid isqat al-nizam — "the people want the overthrow of the regime".

Although the government has now resigned, popular fury is set to grow: on 18 August, the Special Tribunal for Lebanon in the Hague will issue its verdict on the 2005 assassination of Prime Minister Rafic Hariri. Four members of Hezbollah, the Shia militia and political party backed by Iran and Syria, have been tried in absentia for the bombing of Hariri’s motorcade. The verdict had been set for 7 August, but was postponed "out of respect for the countless victims of the devastating explosion" in Beirut three days earlier.

Hezbollah's "state above a state"

Whatever the Special Tribunal’s verdict, political tensions will rise. Hezbollah, classified as a terrorist organisation by the United States and the European Union, enjoys widespread Shia support. Its militia is more powerful than the Lebanese army and it has a powerful bloc in parliament.

Just as the presence of Palestinian guerrillas and their "state within a state" was a factor in the civil war, so Hezbollah’s "state above the state" will provoke still more calls – by Lebanese and outsiders alike – to end a system in which political and economic power is allocated not by merit but by religious sect.

Hezbollah, or Party of God, was conceived by Muslim clerics in the 1980s in response to the Israeli invasion of South Lebanon in 1982. The Shia group has a political and military wing.

National support against Israel: Hezbollah emerged in the 1980s as an amalgamation of Shia militias and played a major role in the Lebanese civil war. It used guerrilla warfare to drive Israeli forces out of South Lebanon – Israel withdrew in 2000. Israel and Hezbollah fought another war in 2006. Its defence of Lebanon against Israel won it cross-sectarian support and acceptance in Lebanese society

Backed by Iran: since its creation, Hezbollah has received military, financial and political support from Iran and Syria. Today, Hezbollah's military wing is more powerful than Lebanon's own army and has become a major regional paramilitary force

Political apparatus: Hezbollah turned its focus to politics following the end of Lebanon's 1975-1990 civil war. It represents a large section of the Lebanese Shia population and is allied with other sectarian groups, including Christians. Their political development has mostly come under Hassan Nasrallah (pictured), who became the group's leader in 1992

Armed wing: unlike other parties in Lebanon's multi-sided 1975-1990 civil war, Hezbollah did not disband its armed wing. Some Lebanese political groups, such as former Prime Minister Saad Hariri's Future Movement, want Hezbollah to put down its arms. Hezbollah argues its militant wing is necessary to defend against Israel and other external threats

Terror group? A number of countries and bodies, including the United States, Israel, Canada, the Arab League and, most recently, Germany, consider Hezbollah a terrorist organisation. However, Australia and many European Union countries differentiate between its legitimate political activities and its militant wing

Hezbollah enters Syria's civil war: Hezbollah has been one of the main backers of Syrian President Bashar Assad in the country's civil war. Its entrance into the war helped save Assad, one of its chief patrons; secured weapons supply routes from Syria and formed a buffer zone around Lebanon against Sunni militant groups it feared would take over Syria. As a result it has won considerable support from Shia communities in Lebanon

Sectarianism: Lebanon has long been at the centre of regional power struggles, particularly between Saudi Arabia and Iran. However, Hezbollah's military and political ascendancy, as well as its intervention in Syria, have also helped stoke Sunni-Shia sectarian tensions in Lebanon and across the region

You may also like: Interview with Lebanese political scientist Bassel Salloukh – Will a new Lebanon arise from the ashes of Beirut?

But is that what "the people", with their banners calling for thawra (revolution) really want? Lebanon, carved out of the Middle East a century ago by the Sykes-Picot accord between Britain and France, is a mosaic of Christians, Muslims, Druze, and others (some 18 sects are officially recognised). In 1943, when France ended its League of Nations mandate, independent Lebanon’s political leaders declared an unwritten "National Pact" under which the president would be a Maronite Christian, the prime minister a Sunni Muslim, and the speaker of parliament a Shia Muslim.

As Riad al-Solh, the first prime minister put it, the aim was to "Lebanonise Lebanese Muslims and to Arabise Lebanon’s Christians." The Christians were to distance themselves from the West, and the Muslims were to abandon the idea of Lebanon as part of a larger Arab nation.

The original premise was that Christians and Muslims were more or less equal in number. But the last census in Lebanon was conducted in 1932, and it is clear that Christians have become a minority in the decades since. With a lower birth rate and a higher propensity to emigrate (thousands fled during the civil war), Christians now comprise just a third of Lebanon’s citizens.

But why adjust the system to reflect demographic reality if the result would be another bout of sectarian warfare? The Taif agreement that led to the end of 15 years of civil war only tinkered at the edges, giving Muslims parity with Christians in parliament and enhancing the power of the prime minister.

Lebanon’s demonstrators have long demanded an end to confessional power-sharing and an end to meddling by a host of foreign powers, from America and Israel to Syria and Iran. Their one success was that domestic and international revulsion at the murder of Hariri forced Syria to withdraw its troops in 2005, 29 years after they began "safeguarding" Lebanon.

The paradox is that the system protesters decry has given them a degree of personal liberty and freedom of speech that is all too rare in the Arab world. Moreover, when jobs depend on patronage, ending the system might bring personal loss. In an experiment by a Lebanese think tank, 70% of interviewees agreed to sign a petition calling for an end to the system, but the figure dropped to 50% when participants were told that their names would be made public.

Lebanon has always been a fragile construction. When I lived in Beirut in the 1970s, the city was indeed the cosmopolitan "Paris of the Middle East", until the civil war, abetted by outside powers, fragmented it into heavily armed neighbourhoods in which the religion listed on one’s ID card could mean life or death.

Given the sophistication and entrepreneurial energy of the Lebanese, it is conceivable that ending the confessional system would turn fragility into strength. But I doubt it.

In other Arab countries, religious minorities have relied on dictators to protect them – and, as in Iraq and Syria, have suffered as soon as national unity is threatened. Would those Maronites who claim a Phoenician rather than Arab identity happily accept majority rule by Muslim Lebanese? Would the Shia accept Lebanon’s Sunnis, now bolstered by Sunni refugees from Syria, as overlords?

The real challenge is to enforce accountability. It is shameful that the warlords of the 1970s and 1980s have become not statesmen but mafiosi in charge of protection rackets (power cuts, for example, provide easy money for suppliers of diesel generators). It is shameful that selfish bankers and official reluctance to guarantee urgent economic and financial reform have stalled negotiations with the International Monetary Fund.

The Lebanese deserve better. In the wake of the disaster in Beirut, the open question of how they will achieve it has become more difficult than ever to answer.

John Andrews, a former editor and foreign correspondent for The Economist, is the author of "The World in Conflict: Understanding the World’s Troublespots".

Home
Print
Newsletter
More on this topic
Aftermath of the Beirut explosion: Lebanon, a state in freefall thanks to corrupt governanceLebanese author Elias Khoury in interview: Beirut's ruling class – "The stupidest mafia there is"Aftermath of the Beirut explosion: "Revolution is born out of suffering"
Related Topics
Confessionalism, Democracy and civil society, Economy, Hezbollah, Lebanese Civil War, Rule of law, Social movements
All Topics

November 2022 sees the Arab world firmly in the spotlight with the COP27 in Egypt and the FIFA World Cup in Qatar. Public trust in MENA governments is weak, thanks to their ... END_OF_DOCUMENT_TOKEN_TO_BE_REPLACED

"You are not my guide... I am the compass. Iranian women have spoken, freed themselves, and unleashed a revolution despite smelling death. They have cut their braids in anger; ... END_OF_DOCUMENT_TOKEN_TO_BE_REPLACED

In “The Wrong End of the Telescope”, Rabih Alameddine draws us away from the headlines and into the personal story of one individual. Mina is complex, compelling and very real. By ... END_OF_DOCUMENT_TOKEN_TO_BE_REPLACED

How are comic book artists in the Arab world responding to the political situation in the region? Lena Bopp talks to illustrators Lina Ghaibeh and George Khoudry about young ... END_OF_DOCUMENT_TOKEN_TO_BE_REPLACED

The clashes in Baghdad between supporters of Muqtada al-Sadr and pro-Iranian militias show that an intra-Shia power struggle is in full swing. An analysis from Cairo by Karim El- ... END_OF_DOCUMENT_TOKEN_TO_BE_REPLACED
Author:
John Andrews
Date:
Mail:
Send via mail

END_OF_DOCUMENT_TOKEN_TO_BE_REPLACED
Social media
and networks
Subscribe to our
newsletter