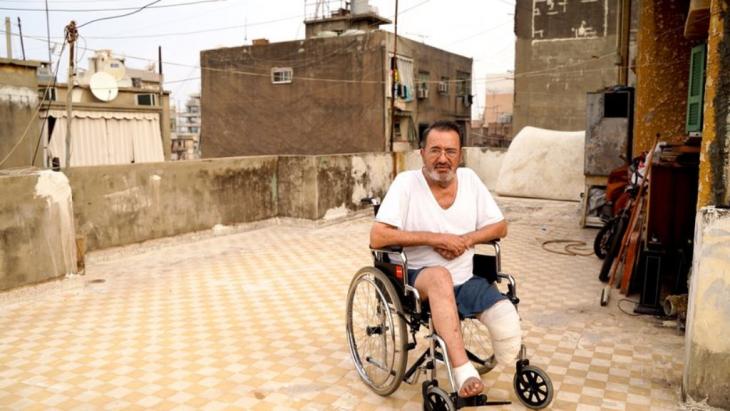 It has been three months since the devastating explosion in the port of Beirut. Since then, inhabitants of the Lebanese capital have been struggling to return to some kind of normality. For many, however, things will never be the same again. Andrea Backhaus reports from Beirut

Just a few seconds changed Ayoub Jouni's life forever. Jouni had been a taxi driver for 21 years. When several thousand tons of ammonium nitrate exploded in the port of Beirut, Jouni was driving his taxi through a district of the city directly adjacent to the port. It was about 6 pm on 4 August 2020. All of a sudden, the windows of his car shattered, debris from nearby buildings brought down by the shock wave from the blast perforated the roof, rocks came crashing down on his left leg. Jouni knew immediately that something was terribly wrong. Doctors would later tell him that they had to amputate his leg. When he came home from hospital a week later, his world had changed irrevocably, he says. It had shrunk, shrunk a lot.

Jouni lives with his second wife, Samar, in a flat in Khandaq al-Ghamiq, a poor, predominantly Shia part of Beirut. He can see the port from the roof terrace of the house. Now, however, Jouni is sitting on his bed, trying to find the words to explain what happened to him. He is 63 years of age and wears a white shirt and glasses. He explains that he lost his left leg because of the explosion and later found that he was unable to move his right leg.

While treating his amputated leg, doctors gave him an injection in the wrong place in his back. Ever since, he has been lame in his right leg. He goes on to say that a splinter took the sight in his left eye and relates how, within the blink of an eye, he lost almost all bodily functions. Since the explosion, he has been confined almost entirely to his flat. "Sleep, pray, sleep, pray," he says, summing up his daily routine. His life, says Jouni, ended with the explosion.

The explosion was a massive rupture

It has been three months since the explosion in the port of Beirut. Images of the gigantic mushroom cloud went around the world. One of the reasons the world was so outraged by the blast was that it was an avoidable catastrophe: for years, 2,750 t of ammonium nitrate had been stored without proper safety measures at the port. And the government knew about it. As recently as July, safety experts told both the Lebanese president, Michel Aoun, and the former prime minister, Hassan Diab, how dangerous the situation was and how devastating the consequences of an explosion would be. And still, the highly explosive chemicals were not moved.

Although a number of port workers were arrested after the explosion, no one at the top level of government was held responsible for it. European heads of state expressed their shock and promised to help the people of Lebanon. French President Emmanuel Macron even travelled to Beirut, embraced survivors in front of the cameras and pledged to help the Lebanese people. The EU swiftly provided millions of euros worth of emergency aid. 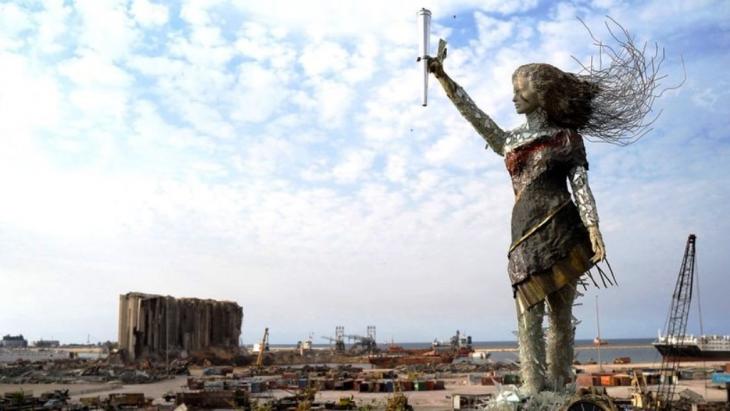 An avoidable catastrophe: for years, 2,750 t of ammonium nitrate had been stored without proper safety measures at the port. And the government knew about it. As recently as July, safety experts submitted a report revealing how dangerous the situation was and how devastating the consequences of an explosion would be. And still, the highly explosive chemicals were not moved

Since then, things have gone very quiet. Yet no other event in recent decades has rocked the country as badly as this. Today, it is very clear that the explosion was a massive rupture.

A total of 191 people lost their lives as a result of the explosion, over 6,500 were injured and about 300,000 were made homeless. Over 70,000 flats in over 9,000 buildings were damaged. The damage in only a fraction of the houses impacted by the blast has been repaired so far. There just isn't enough money for the reconstruction. The World Bank estimates that the damage to buildings and infrastructure runs to between 3.8 and 4.6 billion dollars.

The problem is, however, that Lebanon is broke. Other states and international organisations have stipulated that long-term help will only be given if the government implements a comprehensive package of reform. But Lebanon's political class is not willing to play ball.

Home
Print
Newsletter
More on this topic
Lebanese author Elias Khoury in interview: Beirut's ruling class – "The stupidest mafia there is"Interview with Lebanese political scientist Bassel Salloukh: Will a new Lebanon arise from the ashes of Beirut?Lebanon: from amnesty to amnesia: Lacking a culture of remembranceARTE documentary: Lebanon in free fall
Related Topics
Beirut, Christians in the Islamic world, Confessionalism, Economy, Hezbollah, History of the Near and Middle East, Lebanese Civil War, Poverty, Sunni-Shia tension, U.S. policy in the Middle East
All Topics

November 2022 sees the Arab world firmly in the spotlight with the COP27 in Egypt and the FIFA World Cup in Qatar. Public trust in MENA governments is weak, thanks to their ... END_OF_DOCUMENT_TOKEN_TO_BE_REPLACED

"You are not my guide... I am the compass. Iranian women have spoken, freed themselves, and unleashed a revolution despite smelling death. They have cut their braids in anger; ... END_OF_DOCUMENT_TOKEN_TO_BE_REPLACED

In “The Wrong End of the Telescope”, Rabih Alameddine draws us away from the headlines and into the personal story of one individual. Mina is complex, compelling and very real. By ... END_OF_DOCUMENT_TOKEN_TO_BE_REPLACED

How are comic book artists in the Arab world responding to the political situation in the region? Lena Bopp talks to illustrators Lina Ghaibeh and George Khoudry about young ... END_OF_DOCUMENT_TOKEN_TO_BE_REPLACED

The clashes in Baghdad between supporters of Muqtada al-Sadr and pro-Iranian militias show that an intra-Shia power struggle is in full swing. An analysis from Cairo by Karim El- ... END_OF_DOCUMENT_TOKEN_TO_BE_REPLACED
Author:
Andrea Backhaus
Date:
Mail:
Send via mail

END_OF_DOCUMENT_TOKEN_TO_BE_REPLACED
Social media
and networks
Subscribe to our
newsletter