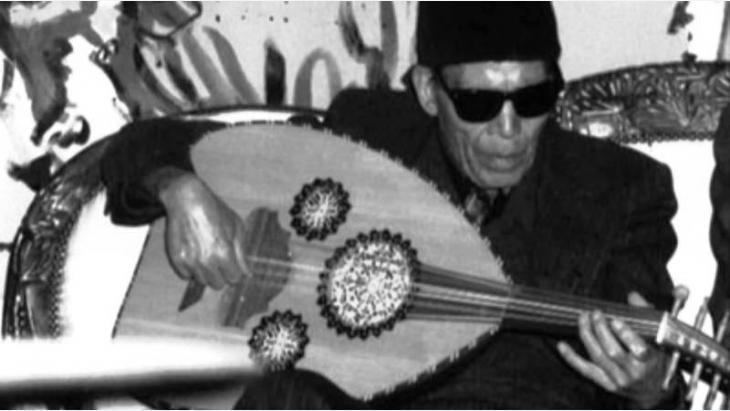 2 July 2018 marked the centenary of the birth of Egyptian protest singer Sheikh Imam. Martina Sabra visited the legendary artist several times in the 1990s and has observed that many years after his death, Sheikh Imam's music is still very much alive on the streets of Egypt

Tahrir Square, Cairo, February 2011. Surrounded by throngs of people, the small band Eskenderella performs well-known Egyptian protest songs. Young media activists film the performances and upload them to the Internet, where they are viewed by thousands and thousands of fans. The songs of Sheikh Imam prove particularly popular even though, at the time, the legendary protest singer had already been dead for over 15 years – and almost 40 years had passed since his major international performances alongside the poet Ahmed Fouad Negm (who died in December 2013).

Good audio recordings of the duo are very rare indeed: because the two artists were repeatedly imprisoned during their joint career and their songs regularly banned, the vast majority of recordings are amateur efforts that were sold on cassette tape. This has in no way diminished the power of Sheikh Imam's songs, which continue to enthral in 2018, seven years after the demonstrations on Tahrir Square.

At private get-togethers in North Africa and the Middle East, it is not unusual for someone to suddenly launch into one of his songs, such as "Shayid Kussurak" (Erect your palaces). The lyrics go: "Erect your palaces on our fields! Build gambling dens beside the factories! And prisons on the sites of public parks! You can rob us of our sleep; it matters little, we didn't want to sleep for long anyway." A 25-year-old student from Morocco hums the melody: "Of course my grandparents listened to this song back in the 1970s," she says caustically. "But has anything changed since then? Nothing. The lyrics of these songs are 100% relevant to the situation today." 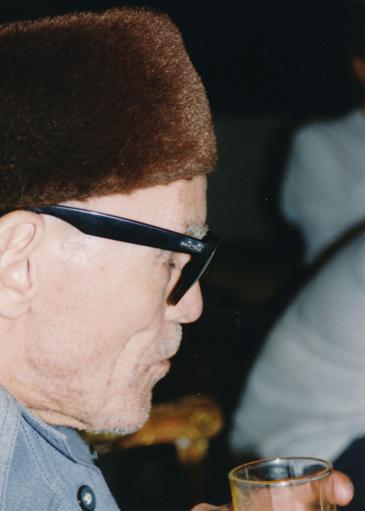 Still popular among Egyptʹs politically conscious youth: oud player and singer Sheikh Imam and famous poet Ahmad Fouad Negm ended up in jail more than once, their songs regarded as too critical of the then Egyptian president Anwar al-Sadat, among others. During the uprising against Mubarak in 2011, their music could be heard echoing across the squares of Cairo

Sheikh Imam Muhammad Issa was born 100 years ago, on 2 July 2018, in a village near Cairo. Blind from the age of four months, his parents later sent him to a special school to train as a reciter. Because he was a musically gifted child with a strong voice, he also sang at family events.

When he was 12, one of his uncles brought him to Cairo and enrolled him at Al-Azhar University. Sheikh Imam stayed there for five years. The intention was that he would become a prayer leader. But it was not to be: the conservative clerics expelled him, allegedly because he listened to the radio in secret.

Sheikh Imam now had to fend for himself and began singing at weddings and other family occasions.

He quickly became known throughout his neighbourhood, El Ghouryah, a district steeped in history.

Because, as a blind man, he had no hope of getting a permanent job and regular income, some neighbours and distant relatives made a modest dwelling available to him free of charge.

Sheikh Imam taught himself to play the oud – the Arab lute – and began taking lessons with Zakariya Ahmad, a famous composer of the day. At some point, radio stations discovered him, which led to occasional radio performances.

In 1962, he met Ahmed Fouad Negm. Negm, a highly talented lyricist and self-taught man of humble origins, had already spent three years in prison for his protests against corruption.

"Witticisms of the Egyptian street"

The two began to perform together: Imam put Negm's poems – which got progressively more political as time went on – to music. For several reasons, these poems are easy to remember: first of all, Negm wrote in vernacular Egyptian Arabic, Amiyya. Secondly, he used popular song forms such as zajal or mawwal that are familiar to every Egyptian child. Thirdly, he made reference in many of his verses to Egyptian oral everyday literature such as riddles, sayings and children's songs.

"Negm's diction is simple and earthy," wrote the literary scholar Kamal Abdel Malek in his English-language study, which was published by Brill in 1990, "since it is, by and large, derived from the everyday colloquial and it embodies the racy witticisms of the Egyptian street." 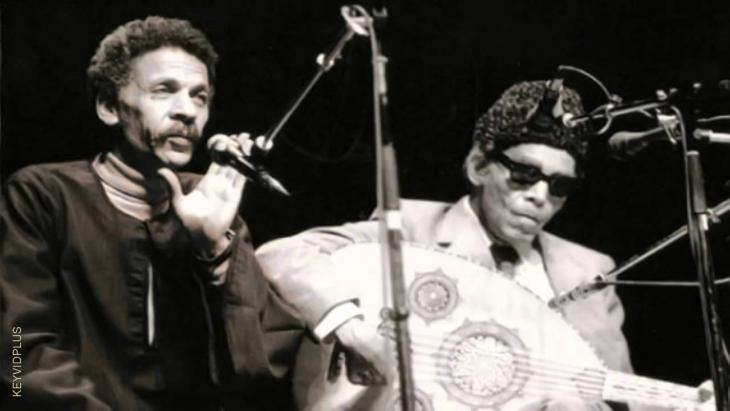 Social protest combined with wit and creativity: Imam and Negm were not for sale. They sang protest songs about Nasser's dictatorship, social injustice, exploitation and corruption. When thousands of workers and students took to the streets of Egypt in 1968 and over a dozen of them were killed, the two artists aligned themselves with the protesters

Imam and Negm only came to nationwide fame after Egypt's defeat to Israel in 1967. In their songs, they criticised the Arab defeat and demanded the return of the Sinai Peninsula. Nasser, who was politically on the ropes at the time, tried to use the duo's popularity to bolster his position, offering them large sums of money to appear on television.

But Imam and Negm were not for sale. They sang protest songs about Nasser's dictatorship, social injustice, exploitation and corruption. When thousands of workers and students took to the streets of Egypt in 1968 and over a dozen of them were killed, the two artists aligned themselves with the protesters.

At this point, the Nasser regime switched to repression mode: in 1969, Imam and Negm were charged and sentenced to life in prison. Gamal Abdel Nasser died in 1970. Two years later, in 1972, the new president, Anwar al-Sadat, released them. But their freedom did not last long: Imam und Negm targeted Egypt's most important ally, the USA with the acerbic lyrics. In 1973, Imam, Negm and the musician and painter Mohammed Ali were back behind bars once again for the following lines in the song "I know you, Papa Nixon, Mister Watergate" which they performed on the occasion of the American President's visit to Egypt:

"Welcome Papa Nixon! All Arabic dictators, the have-nots and the oil sheikhs rolled out the red carpet for you. They even call you Hajji, a devout pilgrim. Do you feel at home, Papa Nixon?"

Imam and Negm also sang songs of protest about the Lebanese civil war, the Camp David Accords between Israel and Egypt and the rights of Palestinians in the Middle East conflict. Azza Balbaa, a gifted singer and actor, often joined them for concerts.

From 1977 onwards, Imam and Negm were allowed to travel abroad again and they did, giving concerts across the Arab world and in Europe, including France and Germany. In 1981, however, the duo split up. For many years, Sheikh Imam refused to sing Negm's songs. Latterly, he tried to build a career as a solo artist, albeit without great success. Sheikh Imam left the house he had shared with Ahmed Fouad Negm for many years and moved to a different flat a few streets away. Nevertheless, he remained true to the Hosh Qadam district of Cairo's Old Town for the rest of his days.

In his final years, Sheikh Imam rarely performed on stage. He occasionally performed at private parties, but his right arm was weak and he could barely play the oud any more. Women from the neighbourhood did his washing for him, made him food and helped keep his modest home clean.

A few years before he died, the blind singer was often to be found completely immersed in the recitation of the Koran. In old age, the former student of recitation became more devout. Nevertheless, cant displays of piety and dogmatism remained anathema to him. "Islam is social justice. Full stop." That was his creed. Sheikh Imam died on 7 June 1995. His legacy as a musician and an activist lives on.

Home
Print
Newsletter
More on this topic
The soundtrack of the Arab Spring: Pop, pathos, and poetryInterview with Iranian artist Shirin Neshat: The many faces of Oum KulthumJazz in the Arab world: The roots of fusion
Related Topics
Arab music, Arab Spring, Free speech and censorship, Gamal Abdel Nasser | Nasserism, History of the Near and Middle East, Musical worlds, Tahrir Square
All Topics

As the photo of Fairouz talking to French President Emmanuel Macron spread around the world, many asked if Arabs today had any contemporary stars of Fairouz's standing. In this ... END_OF_DOCUMENT_TOKEN_TO_BE_REPLACED

Saudi Arabia and its allies have agreed to set aside their differences with Qatar at a summit meeting of the Gulf Cooperation Council. The restoration of diplomatic relations ... END_OF_DOCUMENT_TOKEN_TO_BE_REPLACED

Many in the West equate Middle Eastern music with the folklore of "A Thousand and One Nights". Tayfun Guttstadt demonstrates just how erroneous this is END_OF_DOCUMENT_TOKEN_TO_BE_REPLACED

Ten years after the start of the Arabellion in North Africa and the Middle East, many view the movement as a failure. But rather than being over, it has now entered a more mature ... END_OF_DOCUMENT_TOKEN_TO_BE_REPLACED

Thank you, Martina. Imam was one of those who made me a rebel!

END_OF_DOCUMENT_TOKEN_TO_BE_REPLACED
Social media
and networks
Subscribe to our
newsletter