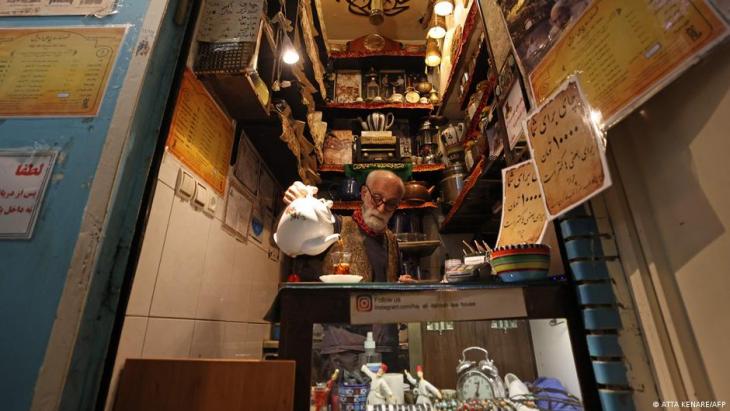 Tea is a mainstay of popular culture across the Middle East, from Morocco to Qatar. Tucked away in Tehran's Grand Bazaar is arguably the world's tiniest tea shop. The owner's signature brew – "the tea of kndness" – is just one of the many treats awaiting discovery

With his trimmed beard, red scarf and bronze-coloured waistcoat, Kazem Mabhutian serves a steady stream of customers in the smallest and oldest teahouse in Tehran, but at 63 years old, he is counting on God to find him a successor.

Tucked in an alleyway of the Grand Bazaar, wedged between a clothes shop and the door of a mosque, his 1.5-square-metre chaikhaneh (tea house) is invisible from the main street. And yet it is the most famous among tea connoisseurs in the Iranian capital.

In between pouring glasses of steaming brew for his customers, Mabhutian tells the century-old story of the fabled Haj Ali Darvish Tea House with pride. His father Haj Ali Mabhutian, nicknamed the Dervish or Beheshti, or "He who deserves paradise", was born in Hamedan in western Iran, he says.

"He came to Tehran at the age of 15 to earn a living. He bought this shop from Haj Hassan who had opened it in 1918." 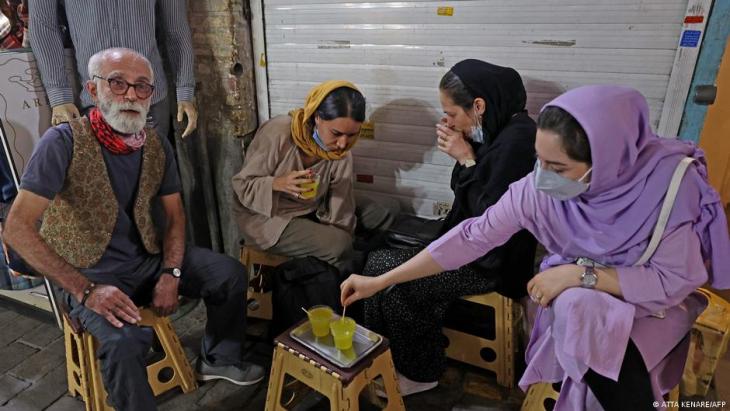 Given the miniature size of the teahouse, there are no tables, but customers can pull up a plastic stool outside, amid the bazaar's bustle

Arranged around him are cups and teapots, boxes of tea and a samovar water-heater. There is an antiquated radio, a paraffin lamp, statuettes of dervishes, and gold-coloured sticks of Nabat, a saffron-scented barley sugar. On the wall, a tourism ministry certificate assures that the place "is part of the intangible heritage of the national culture".

Aside from the traditional Iranian black tea, Mabhutian prepares cardamon, cinnamon, mint, thyme and hibiscus brews every day from 7:30 am. But his favourite is his signature "tea of kindness", a mixture of mint, lemon and saffron which gives it a zesty yellow colour.

Business is usually steady: experts say that Iranians consume an average of nine small glasses of tea a day, or 100,000 tonnes nationwide every year.

"Until 2007, my father ran this house, known as the smallest in the world," said Mabhutian. "Then he broke his leg and never returned to work. He stayed at home until his death in 2018 at the age of 92."

Kazem then left his advertising agency job and took over the business. "I don't regret it at all," he said. "Advertising was a business, but this is a question of love. I chose this job with my heart, not for the money."

On the menu, the price of a cup of tea is listed at 100,000 rials (35 cents), but "the rates are not fixed," he said. "It depends on the financial situation of the customer." Every day he serves some 200 customers. 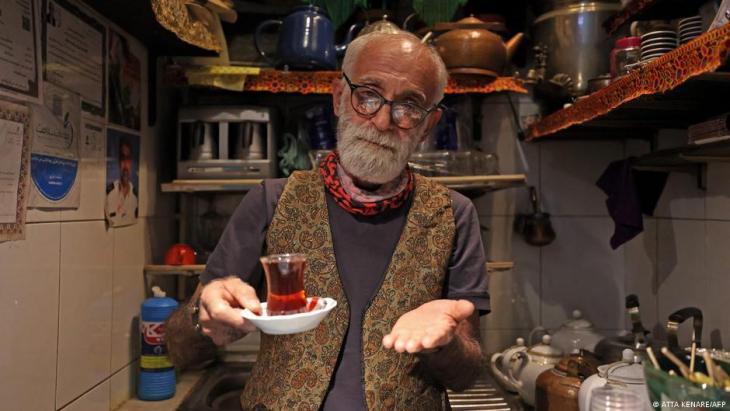 Experts say that Iranians consume an average of nine small glasses of tea a day, or 100,000 tonnes nationwide every year. Mabhutian, the owner, is getting on in years and is still single, so does he worry about what will become of his beloved shop in future? "Not at all," he said confidently. "God will find me a successor. A place like this one does not die"

"Most of them come from outside the market because they know us," he said. "There used to be a lot of tourists too, because this shop was in the guidebooks, but the foreigners disappeared with the pandemic."

Given the miniature size of the teahouse, there are no tables, but customers can pull up a plastic stool outside, amid the bazaar's bustle. Seated there was Shafagh, a 32-year-old graphic designer, with her friend Forough, 47.

"Everyone sells tea, but the important thing is to know how to make it," said Shafagh, enjoying a cup of kindness tea. "It's like cooking - when someone makes tea with love, it tastes completely different."

Forough chimed in that "I also come to chat with the owner. I think his tea is nothing like the tea served in other places".

Every weekday, Habibollah Sayadi, 70, leaves his nearby clothing shop to enjoy his Iranian black tea. "I'm a regular - I've been coming here for almost 50 years because I love the taste of his tea," he said, adding approvingly that "Mr Kazem respects hygiene" in times of COVID.

Mabhutian, the owner, is getting on in years and is still single, so does he worry about what will become of his beloved shop in future?

"Not at all," he said confidently. "God will find me a successor. A place like this one does not die."

When is it and when is it not acceptable to display a political banner at the World Cup in Qatar? The answer seems to depend largely on the political message, with fans ... END_OF_DOCUMENT_TOKEN_TO_BE_REPLACED

The Kurds are under attack from two sides: from Turkey, and from Iran. The situation in their territories in northern Iraq is becoming increasingly desperate. Birgit Svensson ... END_OF_DOCUMENT_TOKEN_TO_BE_REPLACED

Iranians do not want an Islam that interferes. They are fed up with a system that manipulates people with simple promises of salvation and anti-Western propaganda. Islamic ... END_OF_DOCUMENT_TOKEN_TO_BE_REPLACED

"The Voice of Dust and Ash" draws us into the life and times of Iranian maestro Mohammad Reza Shajarian with passion and joy, focusing on the man who stood, and still stands, for ... END_OF_DOCUMENT_TOKEN_TO_BE_REPLACED

November 2022 sees the Arab world firmly in the spotlight with the COP27 in Egypt and the FIFA World Cup in Qatar. Public trust in MENA governments is weak, thanks to their ... END_OF_DOCUMENT_TOKEN_TO_BE_REPLACED

In Iran, two famous actresses, Hengameh Ghaziani and Katayoun Riahi, were arrested recently. These days anyone who shows solidarity with the protesters is a target to be silenced ... END_OF_DOCUMENT_TOKEN_TO_BE_REPLACED
Date:
Mail:
Send via mail

END_OF_DOCUMENT_TOKEN_TO_BE_REPLACED
Social media
and networks
Subscribe to our
newsletter