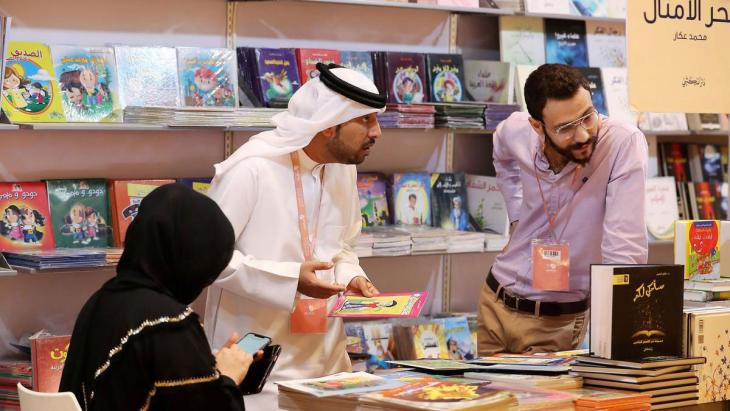 They’ve already got the Louvre; they’ll soon have a Guggenheim Museum as well – and now the Emirates have added literature to their quest for cultural supremacy in the Arab world. Stefan Weidner reports from Abu Dhabi, from the first book fair of this year to take place in person

The fact that the United Arab Emirates are among the first to hold a physical book fair in 2021, while the pandemic is still ongoing, is indicative of just how keen the Emiratis are to take up the cultural and literary mantle of the Arab world’s former cultural centres: Cairo, Beirut, Damascus and Baghdad. Given that all these cities have been mired in decline for many years, we may be glad that at least someone values taking on this cultural responsibility – whatever else we might think of the Gulf states.

Nor is it a bad thing that lively competition has arisen in this area between Qatar and Abu Dhabi, not just in the realm of museums and architecture, but in literature and scholarship as well. The American Georgetown University has established a branch in Qatar. New York University has put down roots in Abu Dhabi. The next field of conflict will be literary life. And literary life will benefit from it.

Unlike in Europe, book fairs in the Arab world are well known for direct sales. Members of the public and booksellers come to purchase a whole year’s supply of reading material or stock. The Arab book market doesn’t have the kind of distribution system used in the German-speaking world, and international delivery is unreliable. All the same – if we are to believe what the publishers are saying – online sales have risen sharply during the coronavirus crisis. It’s a positive development, and may also be a lasting one.

Exhibitor fees were dropped this year, in an attempt to entice publishers into the Emirates’ capital city despite the pandemic. Buyers, in particular school and university students, but also libraries and other institutions, have been encouraged to buy books with state-financed book tokens worth more than a million euros. The reduced exhibition space, however, is the equivalent of just one hall at the Frankfurt Book Fair. If you walked the aisles and counted up the number of stands, you’d have found about 200 exhibitors. The condition for entry was a negative PCR test taken a maximum of 48 hours in advance, available for free at the fair.

But results were only available the following day, ruling out any spontaneous visits. Inside, of course, masks and social distancing were compulsory, and monitored by a throng of black-clad young women carrying large signs. By the time the fair closed, in the region of 30,000 people had been through the halls, according to an estimate by Ali Bin Tamim, whose Centre for the Arabic Language (part of the Department for Culture and Tourism), hosted the fair. 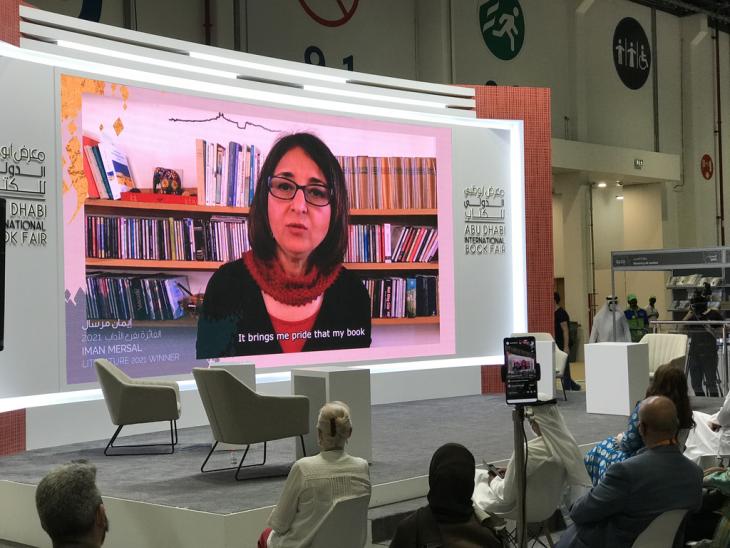 Iman Mersal, an Egyptian born in 1966 who teaches in Canada, received the Sheikh Zayed Book Award 2021 at the Abu Dhabi Book Fair. Mersal has been known in Germany since 2000, when the Cologne Literaturhaus invited her to a poetry festival. Now she has been honoured for a prose work, the novelistic investigation and retelling of the life of the Egyptian author Enayat Al-Zayyat, who committed suicide in 1963 at the age of 26. The book is in line with a trend in contemporary Arabic literature in contemporary Arabic literature that sees authors debating historical events and bringing real people back to life, writes Stefan Weidner in his report from the book fair.

Relocation to the Gulf

Several publishers were missing, however, particularly from Morocco and Algeria, Egypt, Qatar, Lebanon and Palestine. The absence of some who might have been expected to attend was down not only to the pandemic, but also to the political situation. The Emirates’ peace agreement with Israel has dented their popularity, and many boycotted the event. For those with no ideological reservations, however, the pull of the Gulf is still strong: the German-Iraqi Khalid Al-Maaly, for example, who is being honoured for his services to German literature with this year’s Gundolf Prize, awarded by the German Academy for Language and Literature, is moving the official home of his publishing house from Beirut to Sharjah.

In order to divert the spotlight onto their new cultural grandeur, the Arab Gulf states are awarding prizes that our authors can only dream of. Among those with the highest prize money attached is the Sheikh Zayed Prize, at around 200,000 Euros, awarded in several categories and named after the founder of the United Arab Emirates. This year, the main prize was awarded to Jürgen Habermas, whose social theory is held in very high regard in the Arab world.

But since he declined the prize after the announcement was made, attention has shifted to the prize’s Arabic literature category. It was given to the Egyptian author Iman Mersal, who was born in 1966 and teaches in Canada. She has been recognised in Germany since 2000, when the Cologne Literaturhaus invited her to a poetry festival. At that time, she was writing verses that featured the emotions following an abortion, or the mysterious connection between Marxism and ladies’ underwear.

This year, she has been honoured for a prose work: the novelistic investigation and retelling of the life of the Egyptian author Enayat Al-Zayyat, who killed herself in 1963 at the age of 26. The book is part of a trend in contemporary Arabic literature that sees authors addressing themes from contemporary history, debating historical events, bringing real people back to life. It is a trend that also featured on the shortlist for the International Prize for Arabic Fiction (administered by the Booker Prize Foundation in London). This, too, was awarded, virtually, in Abu Dhabi.

The Tunisian author Amira Ghenim’s shortlisted novel Calamity of the Nobility falls into this category: its hero is the Tunisian social reformer El-Taher El-Haddad, who was already campaigning vehemently for the emancipation of Arab women a hundred years ago. And Iraqi author Dunya Mikhail, who lives in the USA, made the shortlist with The Bird Tattoo, a novel set in the very recent past. Its subject is the displacement and enslavement of the Yazidi religious minority by IS.

She skilfully interweaves a contemporary story of love and suffering with ancient Yazidi and Mesopotamian myths from the same geographical region. In the end, it was the Jordanian Jalal Barjas (born 1970) who won the prize, for Notebooks of the Bookseller. His book draws on the genre of novels about readers, which is just as popular in the German-speaking countries – though it also strikes the apocalyptic mood that has taken hold in many countries of the Arab world, albeit not currently in the Gulf states.

A monopoly on literary prizes

With its financing of this year’s Arabic Booker Prize, Abu Dhabi now practically has a monopoly on the major Arabic literary prizes. Even so, all the winning books display a far-reaching critical consciousness, are progressive in an emancipatory, socially-engaged sense, encourage political dissent, and combat sugar-coated portrayals of Arab societies (particularly the religious societies), sometimes very fiercely.

But that doesn’t mean the Emirates’ promotion of literature is not part of a political agenda. And if you’re looking for the personification of this cultural policy, you will find it in Omar Ghobash, who was born in 1971. Following ambassadorial posts in Moscow and Paris, he is now a minister of state in the foreign ministry. He sponsors a prize for translation from Arabic, administered by the London-based magazine Banipal, which will also have a German edition as of next year.

Ghobash looks like George Clooney, speaks English, Arabic, Russian and French, and in 2020 advocated publicly for the peace agreement with Israel. He knows from personal experience that when the Israel-Palestine conflict turns violent, the whole Arab world suffers: his father, Saif Ghobash, was shot accidentally by Palestinian terrorists in 1977; they were aiming for the Syrian foreign minister standing beside him.

Omar Ghobash is also the originator of a hidden manifesto for the new Emirati cultural policy, which appeared in the form of a book of fictional letters to his teenage son, who is going through puberty and struggling with religious pressures. In 2017 it was published in English by Picador as Letters to a Young Muslim, and in German by Rowohlt, under the title Es gibt keinen Grund zu hassen. Ein liberaler Islam ist möglich (There is no reason to hate. A liberal Islam is possible). Ghobash’s vision is a depoliticised Muslim humanism, which places emphasis on the individual’s path and aims to tone down the highly politicised religion of the Muslim Brothers and the jihadists. There are good reasons for this. Though in political practice, this enterprise boils down to an autocratic, top-down liberalism, the problems of which are in part what has opened the peace agreement with Israel up to criticism.

At the same time, the Emirates’ top-down liberalism has made them a home for many intellectuals with a similar attitude, such as the Syrian religious reformer Mohammed Shahrur, who died in 2019, or the publisher Mayadeh Kayali, another Syrian, who was inspired by Sharur. At the end of our conversation at the book fair, Kayali gives me a copy of her dissertation in parting. Its title is: "The engineer’s art of dominion over women. Marriage in the old cultures of Egypt and Iraq." The world of Arab books is always good for a surprise.

Stefan Weidner is an author and Islamic studies expert. His book 1001 Buch. Die Literaturen des Orients was published by Edition Converso in 2019.

Palme d’Or winner "Boy from Heaven" is a classic crossover film in which cultural elements are mixed together in haphazard and random fashion. Shady Lewis Botros bemoans the ... END_OF_DOCUMENT_TOKEN_TO_BE_REPLACED

In Doha, Arabs from Morocco, Tunisia, Egypt and Algeria are gathering to celebrate the first ever FIFA World Cup to be held on Arab soil. The criticism from Europe? Over the top, ... END_OF_DOCUMENT_TOKEN_TO_BE_REPLACED

November 2022 sees the Arab world firmly in the spotlight with the COP27 in Egypt and the FIFA World Cup in Qatar. Public trust in MENA governments is weak, thanks to their ... END_OF_DOCUMENT_TOKEN_TO_BE_REPLACED

COP27 in Sharm el-Sheikh is turning into a PR disaster for Egypt’s military regime. Instead of praise for the host, the news is full of solidarity for imprisoned activist Alaa ... END_OF_DOCUMENT_TOKEN_TO_BE_REPLACED

END_OF_DOCUMENT_TOKEN_TO_BE_REPLACED
Social media
and networks
Subscribe to our
newsletter