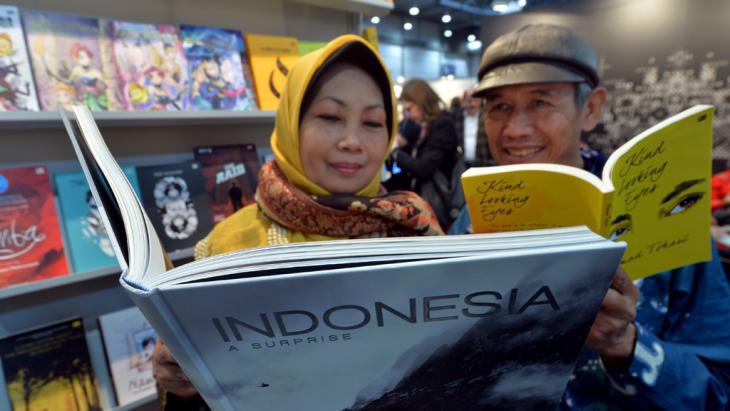 Literature in Indonesia
A land without readers

Indonesia is guest of honour at this autumn's Frankfurt Book Fair. That's a remarkable situation, because readers make up only a tiny proportion of the country's 250 million people. By Monika Griebeler

Good stories, that's what Indonesians love. Chatting with the neighbours, fairy tales put on at puppet theatres, or the popular recitation competitions – there's always plenty of telling and acting, talking and rhyming going on. Poetry readings often attract hundreds of people, the poets performing their pieces with much pathos and gesturing. Bands set verses to music, melancholy, mystic, magical. Some stories are passed down over centuries.

So in a way the country is predestined for the task bestowed on it this autumn. From 14 to 18 October 2015, Indonesia will be the guest of honour at the Frankfurt Book Fair, the biggest festival of stories, the largest trade fair for books in the world.

But on the other hand, Indonesia is not a classic "country of readers". As much as stories are part of everyday life in oral form, they have it very tough in print.

This has nothing to do with the literacy rate: some 93 per cent of the population can read and write. And yet it is an educational issue. "Literature as it's known in the West isn't taught at schools. Children do learn when Jane Austen lived, but they don't usually read any of her books," says publisher John McGlynn, whose Lontar Foundation translates Indonesian works into English. "So it's actually astounding that there are outstanding authors here. After all, where could they to have learned to write? Certainly not at school."

And not in society either, says Goenawan Mohamad, who as chairman of the national committee for Indonesia is guest of honour at the Frankfurt Book Fair. "We Indonesians are more sociable and love a good dose of noise. Aside from that, of course, we don't have long winters for sitting inside to read 'War and Peace' for example." 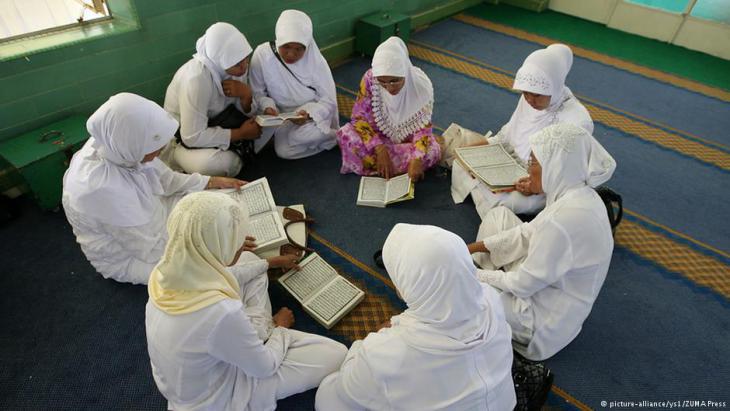 The figures show how little interest the country has in books: approximately 1,400 Indonesian publishing houses bring out an average of 24,000 titles per year. By way of comparison, Germany has more publishers, more titles – and significantly fewer inhabitants. Some 12 times as many books are published per capita in Germany every year.

Most of what comes onto the Indonesian market is straightforward bestsellers translated out of English. That's what earns the publishers money, says John McGlynn. "The books with the largest print runs – if we can call them that – are popular novels and those with a religious leaning: a woman finds first God and then a husband," he says with a critical note. "More and more books are being published, but many of them are terribly written."

Yet despite all this, Indonesia is an excellent guest of honour, says Claudia Kaiser from the Frankfurt Book Fair. It has a great story – full of discoveries and adventures. "Here in Germany, Indonesia is largely a blank spot on the map. It's time we got more of an idea of what's going on there," she says. The guest of honour role is intended to grant insights into Indonesia's culture with its almost 250 million inhabitants and 17,000 islands. And it's designed to make people curious about its literature.

Because they are out there, the young, fresh, politically interested authors who write good books. "The literary scenes – of which there are several – are very active," McGlynn confirms. One interesting aspect is that many writers criticise things the West isn't fond of either: "They don't like fundamentalists, no matter what religion. They don't like sexists. They don't like racists. And I like that."

One example is Lea Pamungkas, who fled during the dictatorship and has lived in the Netherlands ever since. A number of magazines refused to print a short story in which Pamungkas describes how a son of Muslim parents becomes a terrorist. So she distributed it among friends and via the Internet. Then there's Toeti Heraty, who depicts women's situation in the country in her sharp-tongued poetry.

Literature to be read aloud

"Indonesian literature is something that needs reading aloud. You can sense the oral aspect to it," says Claudia Kaiser, an enthusiastic fan of the country's poetry, short stories and novels. "The whole range is there and is often world-class quality, like the sadly deceased Pramoedya Ananta Toer or Leila Chudori, Ayu Utami, Laksmi Pamuntjak and many more."

But in order to discover these writers, readers have to understand them first. So far, however, there are few experienced translators. And the translation programme – the core of the guest of honour's appearance at the book fair – is rather lagging behind. Brazil began its translations three years before the book fair, while Finland even gave itself six years. And Indonesia? Only last autumn did the Indonesian Ministry of Education and Culture set up a one-million-dollar fund for translations.

"It would have been better if the programme had been launched at least two years earlier," says Claudia Kaiser. Goenawan Mohamad, chairman of the national committee and an author in his own right, chooses even clearer words: "We ought to have started at least ten years ago, but Indonesia has never been a country to plan for the future. Now that's one of our greatest obstacles."

The organisers hope that about 200 titles will be available in the autumn, with an estimated 20 to 30 translated into German. The Indonesian programme was a success at the Leipzig Book Fair in mid-March. The country's booth was often surrounded by visitors, as there was soup and dancing on offer – and also the odd book for readers.

Research project "The Global Qur'an", brainchild of Professor of Islamic Studies Johanna Pink and sponsored by the European Research Council, analyses the history and ... END_OF_DOCUMENT_TOKEN_TO_BE_REPLACED

At a time when even some rich democracies are electing con men as their political leaders, the success of Indonesian President Joko Widodo deserves wider acclaim and appreciation ... END_OF_DOCUMENT_TOKEN_TO_BE_REPLACED

On the Indonesian island of Java, one librarian has started a mobile library, lending books to children in exchange for plastic rubbish. The idea is that they will learn to take ... END_OF_DOCUMENT_TOKEN_TO_BE_REPLACED

Water buffalo and oxen have been part of the work in Indonesian fields for centuries. But the draught animals are no strangers to sport either, as can be seen in two traditional ... END_OF_DOCUMENT_TOKEN_TO_BE_REPLACED

According to the latest Reuters tally, more than 2.54 million people are now reported to have been infected by the novel coronavirus globally and 177,004 have died. As Muslims ... END_OF_DOCUMENT_TOKEN_TO_BE_REPLACED

Comments for this article: A land without readers

If Claudia Kaiser is such an enthusiastic fan of Indonesian literature, why can't she spell the names of half the authors she cites?

END_OF_DOCUMENT_TOKEN_TO_BE_REPLACED
Social media
and networks
Subscribe to our
newsletter