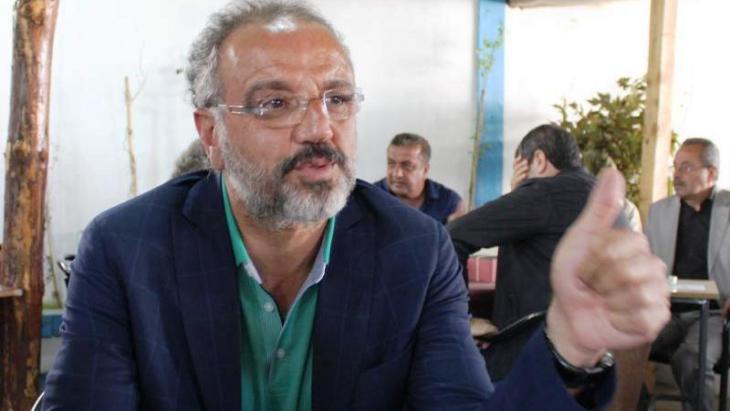 Local election re-run in Turkey
"My strategy is honesty"

On 1 June 2014, some local elections in Turkey were re-run after the results of the original polls were contested. Re-runs were held in the provincial capitals of Agri and Yalova. For the citizens of the eastern Anatolian city of Agri, the outcome was a surprise: the candidate of the Kurdish BDP party, Sirri Sakik, clearly prevailed against the ruling AKP, taking 51 per cent of the vote. Observations from Agri by Ekrem Guzeldere

It's 7 o'clock in the evening and the atmosphere in the city centre of Agri in eastern Anatolia has the feel of a folk festival or a football celebration: there are flags, songs, chants and people dancing in the streets, all accompanied by a chorus of car horns. The first official results of the re-run election for the office of mayor have just been announced.

Sirri Sakik, the candidate of the Peace and Democracy Party (BDP), has taken a clear five-per-cent lead over Hasan Arslan of the ruling Justice and Development Party (AKP). It is already after 11 o'clock when Sakik, lacking a balcony, finally clambers atop the roof of the campaign bus to address the celebrating crowds: "It is actually peace that has won here. We campaigned for votes so that together with the people, we could turn the geography of suffering into a geography of peace. Today's result is a victory for peace!" exclaims Sakik.

The truth is, however, that the possibilities for change are very limited. Agri (Turkish for Ararat), far to the east and close to the borders of Nakhchivan and Armenia, is one of the poorest provinces in Turkey. Xezal Bartil, who has been working on women's issues for the BDP in Agri for the past year, remarked the day before the election that "on home visits, you often don't know where to sit down – the people often lack even the bare necessities!" Unemployment is high, there are no major employers to speak of, public and private investment is rare and the infrastructure is poor. 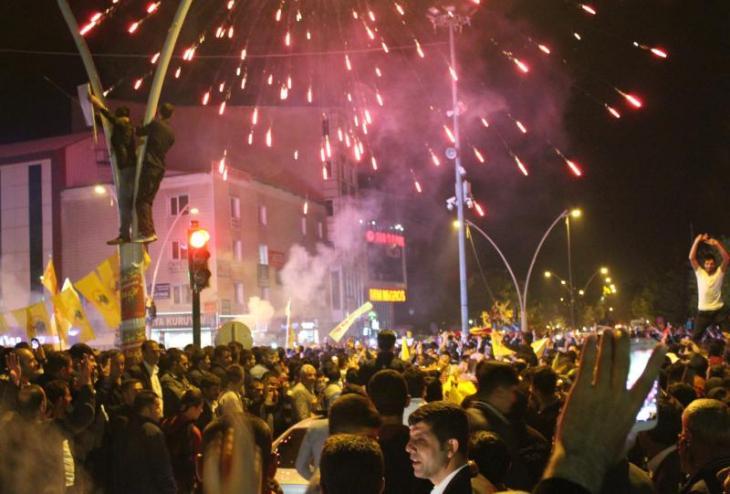 Party atmosphere on the streets of Agri in eastern Anatolia where the Kurdish BDP succeeded in getting 51 per cent of the vote in a re-run of the recent local election in the city, ousting the incumbent AKP mayor from the town hall

"Of course nothing will change under the BDP," said the engineer Bulent Taner during the celebrations in Agri. "They won't be building any factories. But it is still important for us to feel that we are represented here and taken seriously as Kurds."

The provincial city of Agri has had an AKP mayor for the past ten years. In 2009, the AKP got 39.6 per cent of the vote with its top candidate, Hasan Arslan, while the Kurdish DTP (forerunner to the BDP) won only 32 per cent. On 30 March 2014, the election in Agri was one of the most hotly contested in all of Turkey. According to the preliminary results, the BDP was ten votes ahead of the AKP, which then lodged a protest. The votes for the 15 electoral districts finally had to be recounted. Although the AKP then took the lead, polling officers discovered a ripped-open bag of ballots that should have been closed. It was therefore agreed that the election should be re-run, which is what happened last Sunday.

Seldom has the provincial city been such a focal point of national interest. Police units and police vehicles from all over the country flocked to Agri, as did journalists from Ankara and Istanbul – media representatives who rarely report from or about Agri. Some of the polling stations in schools resembled police stations. Officers in uniform patrolled the scene both outside and inside the buildings. Despite the massive police presence, perceived by many voters as psychological pressure, the day of the election passed off peacefully and without incident.

Ever since the local elections on 30 March, both the AKP and BDP have made a huge effort to win over voters. The BDP sent a six-member committee from Ankara to co-ordinate the election campaign. This team decided, among other things, to cover travel costs for citizens who are registered in Agri but live outside the city.

A total of 1,700 people applied and were then flown or driven in for the election. The AKP dispatched a former member of parliament from Batman to coordinate the final dash for the line. The party also invited five ministers and more than 60 MPs to Agri. Even Prime Minister Erdogan made a campaign appearance. The BDP likewise invited numerous MPs, such as Leyla Zana, and mayors including Gultan Kisanak from Diyarbakir to the election events. 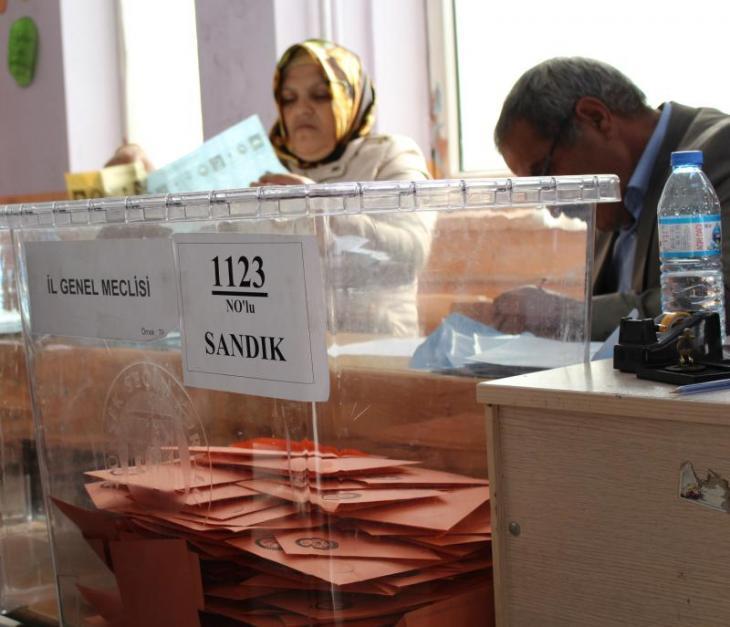 All eyes on Agri: police units and Turkish media from Ankara and Istanbul descended on the city to report on the re-run of the election. According to Ekrem Guzeldere, the police presence was so great that polling stations in schools closely resembled police stations

In the course of the election campaign, fierce disputes arose between the rival parties. Hasan Arslan, AKP candidate and until last Sunday (1 June 2014) the city's mayor, said on the eve of the election: "The BDP exercises violence and threatens voters, telling them that if they do not vote for the BDP, their children will be kidnapped. We're being attacked on the street; my car was damaged four times." Arslan backed up his claims by showing a text message in which he was threatened by PKK sympathisers.

For its part, the BDP accused the AKP of threatening voters that "their child benefits would be cancelled if the AKP loses", says Murat Sayan from the BDP campaign team. In addition, the party rank and file claim that the AKP gives money to the city in order to buy votes. Both accusations are impossible to prove. But it would arguably be a euphemism to describe the campaign as clean and democratic.

In view of the heated campaign, the tension in the city and the police presence, the fact that the election remained peaceful can be counted as a success. The clear victory of the BDP likely contributed to the untroubled course of the evening, the party winning some 2,500 votes more than the AKP this time around. Ultimately, the BDP got 51 per cent of the vote and the AKP just under 45 per cent. "If the AKP had won, it is likely that a civil war would have broken out here", is the word on the streets of Agri.

Sirri Sakik, who comes from the Anatolian town of Mus and was up to now an MP in Ankara, will move to Agri for the next five years. "My strategy is honesty – no lies, no empty promises," he said on Saturday evening (31 May 2014) in the BDP's campaign office, where many citizens from Agri who now live in Europe and the USA were on hand to express their support. Whether this will consist of more than just moral support remains to be seen in the coming years. Without help from the outside, Sakik will not be able to accomplish anything much. If this happens, it is highly questionable that his constituents will be content with his pledge of honesty.

This year Annemarie Schimmel, the great German scholar of Islamic studies, would have turned 100. Unique within the German and international academic community of her time, ... END_OF_DOCUMENT_TOKEN_TO_BE_REPLACED

The Palestinian militant organisation Hamas, with Hezbollah's help, is building up a military presence in Lebanon, the ultimate consequences of which could be devastating, writes ... END_OF_DOCUMENT_TOKEN_TO_BE_REPLACED

More and more voices are being raised in Turkey that challenge previous versions of the country's history. These alternative accounts, still largely ignored by official quarters, ... END_OF_DOCUMENT_TOKEN_TO_BE_REPLACED

Violence against doctors and lawyers in Turkey has been growing in recent years. But instead of taking action, the government is openly hostile towards two unions representing the ... END_OF_DOCUMENT_TOKEN_TO_BE_REPLACED

The Sufi Trail is a long-distance hiking route from Istanbul to Konya that seeks to revive the ancient tracks used by foot pilgrims on their way to Mecca. Marian Brehmer spoke to ... END_OF_DOCUMENT_TOKEN_TO_BE_REPLACED

Foresight is needed to turn the tide of German policy. Being independent of Russia must not lead to dependence on authoritarian regimes in the Middle East. By Kristin Helberg END_OF_DOCUMENT_TOKEN_TO_BE_REPLACED
Author:
Ekrem Güzeldere
Date:
Mail:
Send via mail

END_OF_DOCUMENT_TOKEN_TO_BE_REPLACED
Social media
and networks
Subscribe to our
newsletter