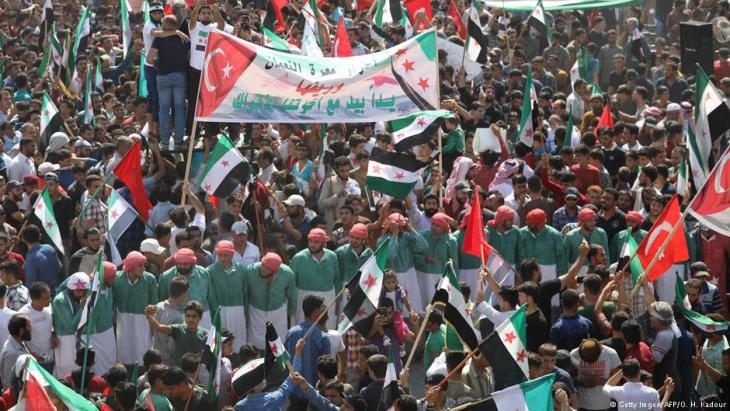 The work of civilian local authorities in Syrian opposition-held areas has been almost totally forgotten. Their failure was essentially due to a lack of a support from the West, as well as a lack of considered political concepts. An analysis by Claudia Mende

"Iʹve come to take part in the free elections. They make us proud." In January 2017, these were the words of a voter in the city of Idlib in north-west Syria, quoted by the news agency AFP. The man was pleased about a particular event in the city: the first elections to the local council. It was hoped that this assembly would steer the fortunes of the local community through difficult times. Eighty five candidates were standing for election to the 25 seats. A 10-member executive committee was later chosen from its ranks, the head of which served as mayor for the city with its population of around 200,000 at the time. Anyone over 25 years old and born in Idlib was entitled to vote.

The vote was a small-scale sensation in the last province still in the hands of the opposition. In the year 2015, the Syrian government army withdrew from the region on the Turkish border. "Fateh al-Sham" jihadists had captured the city and initially governed it. But during the course of 2016, the citizens of Idlib were able to convince the jihadists that the city needed a civilian administration. This resulted in the election and establishment of a city council.

Since then, Idlib local council has been managing the daily business of the community. It guarantees supplies of drinking water, electricity and fuel, ensures that roads are repaired and debris is cleared following bomb attacks. Rubbish needs to be disposed of and sewers maintained. People are needed to distribute aid and somehow take care of the many sick and injured. The Idlib local council co-ordinated and organised all of this, as well as could be expected amid a humanitarian catastrophe with many internal refugees and conflict damage.

As the Syrian opposition movement gradually brought large areas of the country under its control from 2012 onwards, public structures initially imploded in many places. Opposition-held territories became a laboratory in which people had to experiment with new forms of self-administration.

"The local councils arose out of pure necessity," says Leila al-Shami, British-Syrian activist and writer.  "They were attempts to establish day-to-day services in local areas from the bottom up." 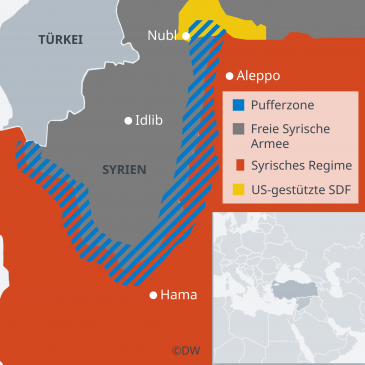 In a stranglehold: the two regional powers Turkey and Russia agreed in mid-September 2018 to create a demilitarised buffer zone around the rebel bastion in order to avert an imminent offensive by Syrian government troops. Although the agreement was only partially implemented, a fragile ceasefire has since prevailed in the region

Al-Shami believes that the local councils arose spontaneously and were not the expression of a political ideology. At a village, municipal and provincial level, they filled a vacuum that the government had left behind and that no-one was prepared for. Initially, mostly young activists improvised, distributed aid and tried somehow to cope with the emergency. They wanted to develop a democratic alternative to the Assad state, but they lacked clear ideas for this.

Some 600 city and provincial councils were set up primarily in the provinces of Idlib, Aleppo and Daraa, as well as in the Damascus conurbation and Raqqa. They gradually consolidated their structures. After the most pressing humanitarian questions, the councils tackled projects such as school and hospital reconstruction. Local councils conducted negotiations with militias, tried to curb the influence of radical Islamists and mediated between hostile groups.

The civic representations enjoyed varying levels of success according to region. A 2017 report by the Swiss Peace Foundation appraising five case studies from all parts of the country found that local councils had certainly succeeded in guaranteeing a minimum level of services and supplies for day-to-day life. To a certain extent, they had also created a regulatory framework for democratic decision-making within the local authority area. According to the study, opportunities for public participation had significantly improved since the councils were first set up in 2012. Whereas initially, a small group of activists drew the local representatives from their own ranks or appointed dignitaries, more and more genuine elections were held between 2013 and 2015.

Nevertheless, the study critically notes, in many places powerful families exerted a great influence on the composition and decisions of the councils. Despite this, the authors of the study say that in view of the difficult situation and the lack of a democratic tradition in Syria, the councilsʹ achievements have been remarkable. They report public meetings, opportunities to make complaints and healthy discussions on Facebook.

This impression is confirmed by Leila al-Shami from her conversations with those involved in the local councils. "Not all areas have managed to overcome undemocratic structures," she says. There were cases of nepotism and corruption in the distribution of aid. Other local authorities struggled with prevailing quarrels between clans, or the overpowering influence of political and religious groups. But they were the only institutions to rightly claim, to a certain degree, that they were representing Syriansʹ concerns.

One major deficit was the lack of female involvement. Only very few women stood for election. Not because of any official sanctions, but "because of social norms", as one anonymous council member put it. The only exception was the city council of eastern Aleppo. Following the areaʹs recapture by government forces, it now operates in a rebel-held rural enclave. With the 38-year-old teacher Eman Hashem, it elected a woman to chair it in 2018.

The fair distribution of aid posed a further problem. Primarily in the early years, opposition-held areas did receive food and medicine from foreign donors such as France and the USA. But these shipments were irregular and uncoordinated, says Agnes Favier in a 2016 study of local administration in opposition-held territories. This led to conflict over its distribution, which undermined the legitimacy of the councils.

Pressure on these councils increased further from mid-2014 onwards. With the rise of the terrorist group "Islamic State", local authorities slipped out of public view and lost their international support. In western public view, the Syria conflict was increasingly perceived as a battle between Assad and the Islamists.  In any case, Arab donors in the Gulf gained little from the democracy experiments. The idea that compared to the extremists, Assad was the lesser evil, began to prevail. The champions of a democratic alternative were pulverised between dictatorship and jihadists. 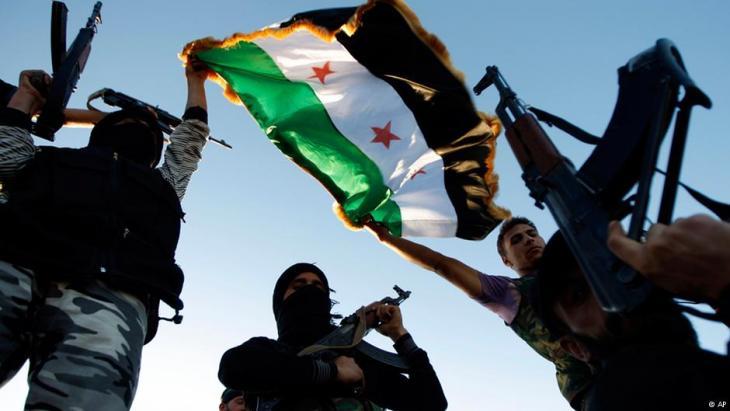 Last bastion Idlib: the only stronghold left to the rebels is the region in north-western Syria. The constitutional committee agreed in January is to start work by the end of the year. That would be a big step. Nevertheless, the prospects for peace are slim. The government has so far shown little interest in genuine peace talks with the opposition

This is one of the biggest failures of western politics – that the local councils did not receive more financial and above all political support. One of Favierʹs criticisms back in 2016 was that international donors never had a co-ordinated strategy to bolster the local authorities in the long-term. Because of this, every local authority and every province in opposition-held areas tried to muster as much support as possible from foreign donors and exiled Syrians. This resulted in inter-authority competition which further shattered the already fragmented opposition.

At the same time, the local councils became the favoured target of the regime. "The regime saw civil organisations and democrats as the greatest threat to its totalitarianism," says Laila al-Shami. After all, it questioned perception of the Syrian conflict as a battle against terrorism.

The example of eastern Aleppo is especially illustrative of this. As observed by Kheder Kaddour, Syria expert at the Carnegie Foundation in Beirut, the notorious barrel bomb attacks on the eastern part of this city of nearly two million began just at the point when the city council in the opposition-held area had established a functioning administration. It was the regimeʹs aim to destroy any impression that others might be in a position to shape the nationʹs future.

The failure of the opposition

But the councilsʹ own weaknesses also played a part. "Despite their local prominence, the local councils were not in a position to consolidate their institutions," says Khaddour. "In addition, the Syrian National Council lacked the power to make decisions and the necessary authority. The local assemblies were not adequately represented in the Syrian National Council." This meant they did not succeed in presenting themselves as a legitimate alternative to the Assad system. The opposition not only failed because of the military superiority of Assad and its allies Russia and Iran. It also failed because of the lack of a political concept for a new Syria.

With Russian support, government forces have been able to recapture large areas of the country since the autumn of 2015. So what has happened to the local councils? "They were mostly dissolved," says Leila al-Shami "once an area was again brought under government control." In some areas, council members were also arrested. The Assad government then installed its own councils, called baladiya. They report directly to the local authority ministry in Damascus. Members of the baladiyas are generally appointed directly by the regime. This has put an end to democratic experiments for the time being. But recollections of such experiments will remain in the collective memory.

The assassination of the Iranian general Qassem Soleimani in a surprise U.S. drone strike is being used by the Islamic Republic of Iran to political ends, says Iranian journalist ... END_OF_DOCUMENT_TOKEN_TO_BE_REPLACED

With "Assad or We Burn the Country", Sam Dagher has furnished the world with some genuine ammunition against the Syrian regime's on-going campaign of disinformation. The only ... END_OF_DOCUMENT_TOKEN_TO_BE_REPLACED

There are only a few thousand Aramaic Christians left in south eastern Anatolia. And they are intent on preserving their ancient culture dating back one-and-a-half millennia. ... END_OF_DOCUMENT_TOKEN_TO_BE_REPLACED

Basma, Jad and Ma'zooza are about to join the Sesame Street family. The trio of new Arabic-speaking characters will help teach children in the Middle East to read and write, as ... END_OF_DOCUMENT_TOKEN_TO_BE_REPLACED

Finding a lasting political solution to the Syrian conflict is the challenge facing the constitutional committee that has been meeting in Geneva since the end of October, under UN ... END_OF_DOCUMENT_TOKEN_TO_BE_REPLACED

So why did not "the West" give more concrete support to what it sounded as "a progressive" opposition/democratic experiment? I wonder what "progressive" forces "in the Middle East" the West" has supported since 1950s.