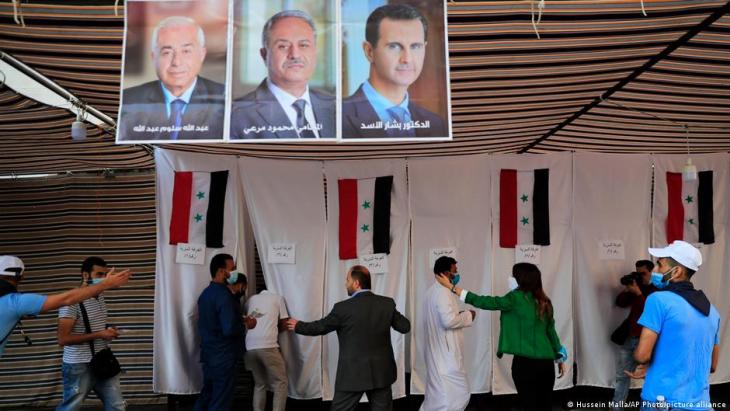 By stage-managing his re-election in a poll widely dismissed as a farce, Syria's President Bashar al-Assad has killed two birds with one stone: he has forced his compatriots to demonstrate their loyalty and submission and will use the outcome to get money from abroad. He needs both to stay in power. By Kristin Helberg

Back in 1999, Hafez al-Assad claimed to have a 100-percent approval rating. In 2021, his son Bashar is not bold enough to make such an audacious claim. Ninety-five percent will do just fine. After all, the election has to appear democratic, and for that, you need several candidates.

That this is not enough to make an election in Syria free and fair isn't just the opinion of Western foreign ministers, it is a basic political fact.

In a country with a one-party regime ruled by the same family for 50 years, no freedom of the press, no freedom of expression, no independent civil society, but instead with an omnipresent secret service, systematic torture, and state institutions that have been co-opted by the regime with a view to cementing its grip on power, the electoral process – from the approval of candidates to the counting of votes – is controlled by the powers that be. There is no independent body in Syria that could guarantee free elections; Assad's "election observers" from Russia, Iran, China and Venezuela are all part of the charade.

But why go to such trouble? Why spend so much money on oversized posters of Assad and election rallies when almost 90 percent of the people in the regions controlled by the regime are living in poverty?

The election serves a dual purpose: it forces people to demonstrate loyalty at home and provides legitimacy abroad. Assad needs both if he wants to transform his military victory, which was achieved with the help of Russia and Iran, into political and economic stability. The need in those areas controlled by the regime is greater than ever before: inflation, rising prices and a broken infrastructure that was destroyed by the Russian and Syrian air forces have made daily life unbearable for the people living there. While the West is providing humanitarian aid for the Syrians – the EU and the U.S. are paying for 80 percent of UN aid – it refuses to finance the regime's reconstruction efforts. Moscow and Tehran, on the other hand, don't have the money for such projects. Yet without foreign investment, Assad will not be able to pay his supporters and will come under pressure. 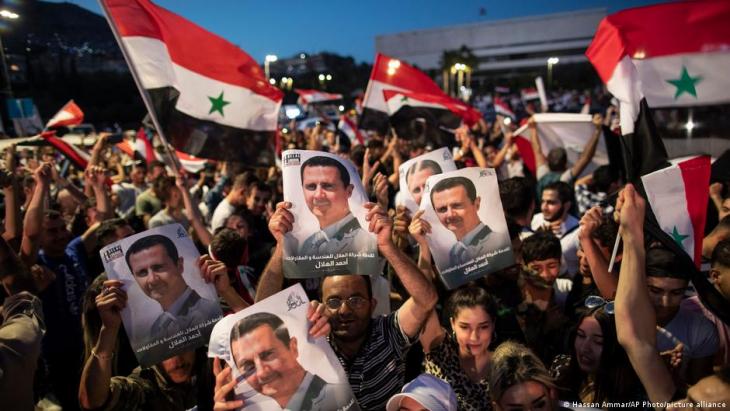 Cheering Assad supporters in Damascus: Syrians know "that demonstrating loyalty in a police state can ensure your survival and give you access to support or anything for which the approval of the secret services is needed," Kristin Helberg writes in her analysis. "Those in power don't care whether this loyalty is real or not: their subjects should just reliably play the role assigned to them and not publicly question their rulers. That's how it works"

In recent months, dozens of regime supporters (journalists, judges, civil servants) have criticised misgovernment and corruption on social media. As part of the system, they see how those who are keeping Assad in power are using bribes, smuggling, black-marketeering, drug dealing and dealing in humanitarian aid to line their pockets.

Decades of kleptocracy have turned Syria into a mafia state. The critics were imprisoned, but were later released as part of an amnesty – just in time for the elections. It was meant as a warning. Nothing more. After all, it wouldn't do to have your own supporters rise up against you.

In the South, however, the dissent is not as easy to contain. In Deraa, where the first major protests took place in 2011, a banner was hung up on election day. It read "There is no future for Syrians with a murderer". Clan representatives and influential figures in the provinces dismissed the poll as illegitimate in the run-up to the election. The regime responded by shutting down polling stations.

Elsewhere, there was evidence of the ritualised way Syrians demonstrate their loyalty, namely by allowing "polling officers" to cast their votes on their behalf. A video showing just how it works has been available on the Internet for several days now. It was obviously filmed in a Syrian polling station. The man behind the ballot box ticks the box beside Assad's name on the ballot paper, puts the paper in the envelope and either hands it to the voters or puts in into the ballot box himself. Only then, do the voters get their identity cards back. Their names and addresses have been noted.

This situation is certainly not new for Syrians. They know that demonstrating loyalty in a police state can ensure your survival and give you access to support or anything for which the approval of the secret services is needed. Those in power don't care whether this loyalty is real or not: their subjects should just reliably play the role assigned to them and not publicly question their rulers. That's how it works. 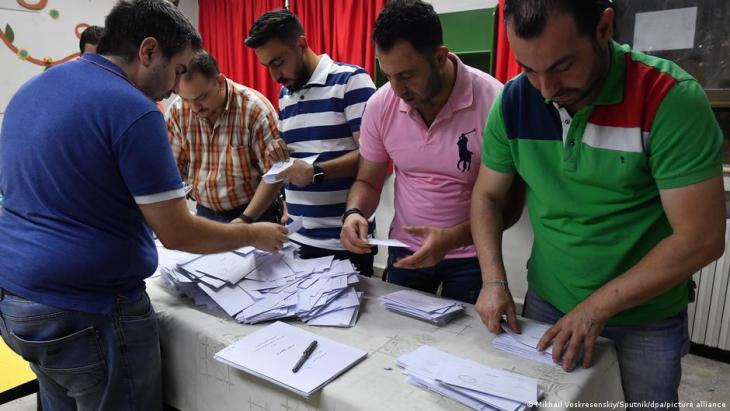 Counting votes at the polling station: in some polling stations, Syrians left the voting to the "polling officers ", as Kristin Helberg writes. A video from a polling station is circulating on the Internet in which the man behind the ballot box marks ticks the box beside Assad's name on the ballot paper, puts the paper in the envelope and either hands it to the voters or puts in into the ballot box himself. After decades of Assad rule, Syrians are used to demonstrating their loyalty in a ritualised way

Naturally, there are those who are genuinely loyal: anyone who benefits from the regime and its structures cheers out of conviction. Others, who have no way of leaving the country, act out of fear and desperation. Many people have reached the conclusion that while Assad is doing dreadful things, he is not going to loosen his grip on power and so, without any viable alternative on the horizon, it would be better to just come to terms with his regime.

The aim is to project the image of an unbending president who has been legitimately elected by his people and who is securely in the saddle even after ten years of war. The plan is already bearing fruit in the region. The Arab League is considering allowing Syria to re-join the organisation so as not to leave it to regional rivals Iran and Turkey.

The United Arab Emirates has reopened its diplomatic mission to Syria; Oman has sent an ambassador. The rehabilitation of Assad in Europe, which is being pushed by Russia, is progressing, with Hungary, the Czech Republic, Bulgaria and Romania voicing criticism of the EU's policy of isolating Syria. For its part, Denmark considers Damascus safe and wants to send Syrians back to the city.

In addition, Assad's re-election undermines the work of the Syrian Constitutional Committee in Geneva. After years of futile negotiations, the committee was all that remained of the UN-led political process. According to UN Resolution 2254, a new constitution was to be introduced before elections were held under UN supervision. Assad paralysed the committee with a view to gaining time. And it worked: he got seven years during which he consolidated his power and didn't have to make any concessions.

Assad's next stage win is expected on 10 July, when the UN Security Council will decide whether to extend the provision of cross-border aid via the last remaining border crossing between Syria and Turkey. Three other border crossings, which were used to transport UN aid into regions that are not controlled by the regime, were blocked by Russia's veto. The impact on the Kurdish ruled North-East of the country and the province of Idlib in the North-West, which is held by Assad's opponents, were catastrophic.

According to the news portal Al Monitor, U.S. President Joe Biden intends to offer Russian President Vladimir Putin a deal in order to bring some relief to the people in these regions: the Americans will keep out of oil drilling in the Kurdish territories, which Moscow has already secured for itself in deal concluded with the Assad regime; in return, Russia will agree to the re-opening of the Al Yaroubiah border crossing, which ensured the supply of humanitarian aid via Iraq until the end of 2019. The new administration in Washington says that unlike under Trump, the USA's focus is on people, not oil.

Whether Putin accepts the offer is questionable. There is the fear that all cross-border help will stop, which would mean that all humanitarian aid would have to be co-ordinated by Damascus. That would give Assad another lever to subjugate the rest of the country.

Home
Print
Newsletter
More on this topic
Syria 10 years on: Bashar al-Assad’s Pyrrhic victory and the arrogance of power War in Syria: What you should know about the Syrian conflictSyrian conflict: The war in Syria is not overFourth Brussels Syria Conference: After nine years of war, who is helping the Syrians?
Related Topics
Assad regime, Authoritarianism, Donald Trump, Human rights, Humanitarian aid, Joe Biden, Syrian Civil War, Syrian opposition, U.S. policy in the Middle East, Vladimir Putin
All Topics

Jonas Poher Rasmussen's Oscar-nominated animated documentary “Flee” focuses on the life of a refugee from Afghanistan. Based on a true story, it centres around the question: when ... END_OF_DOCUMENT_TOKEN_TO_BE_REPLACED

"Flugt" is the world's first museum dedicated to the stories of those forced to flee. The new museum, which focuses on the fates of refugees then and now, is housed in a former ... END_OF_DOCUMENT_TOKEN_TO_BE_REPLACED

Hamburg lawyer Eugen Balin is a member of the World Jewish Congress' Jewish Diplomatic Corps. At the end of 2021, a delegation of the Corps visited the United Arab Emirates, which ... END_OF_DOCUMENT_TOKEN_TO_BE_REPLACED

India is not alone in feeling great sadness today over the death of renowned Reuters photojournalist Danish Siddiqui. He was killed in Afghanistan during clashes between Afghan ... END_OF_DOCUMENT_TOKEN_TO_BE_REPLACED

Born amid the horrors of war in Iraqi Kurdistan, Danish author Sara Omar now uses her voice to denounce violence inflicted on women in the name of reactionary Islam, a "calling" ... END_OF_DOCUMENT_TOKEN_TO_BE_REPLACED

END_OF_DOCUMENT_TOKEN_TO_BE_REPLACED
Social media
and networks
Subscribe to our
newsletter