Bitter Reckoning with Iran's Past

Mahmud Doulatabadi is known as the doyen of contemporary Iranian literature. His latest novel is a page-turning panorama of Iranian mental anguish. A review by Angela Schader 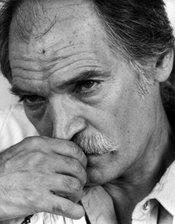 The grand seigneur of contemporary Iranian literature: Mahmud Doulatabadi has published numerous novels, short stories, plays and essays and is regarded as the most significant contemporary Persian prose writer

​​The history of Iran "can be seen as a cycle of political demolitions and reconstructions, in which the building bricks newly formed and shattered over and over again are made of human blood, flesh and bones," wrote Mahmud Doulatabadi in an essay published in the Neue Zürcher Zeitung.

For a quarter of a century, the Iranian writer – known in German translation above all for his novels set in harsh rural Iran – has been struggling to put this macabre historical vision into literary form.

Now the book is completed; and while German readers can hold the first pressing of the translated version in their hands, the Persian manuscript is still held up at the Teheran censorship office, although the author is known as the grand seigneur of contemporary Iranian literature.

That speaks volumes about the book's explosive content, a great departure from Doulatabadi's previous naturalist novels. The Colonel clearly approaches the sinister perspective oscillating between insanity and reality that marks out milestones of Iranian literature such as Sadegh Hedayat's novel The Blind Owl and Hooshang Golshiri's Prince Ehtejab.

Although readers of the translation will undoubtedly have more difficulties finding their bearings with the novel than an Iranian readership, it is worth attempting an experiment. I would advise diving straight into this dark labyrinth of a novel and only consulting the translator Bahman Nirumand's epilogue later. In his notes, the translator anchors the main characters politically and historically – but at least for a while, readers profit from sharing the cold hell of their lack of orientation and perspectives with them without a guide.

The revolution devours its own children

The novel's main narrative, set in the early 1980s, covers less than twenty-four hours. In pouring rain at half past three in the morning, the elderly Colonel is rudely awoken by two taciturn uniformed men and taken on "a short visit to the public prosecutor's office". In return for a fee, he is to be allowed the mercy of burying his barely teenage daughter Parvaneh, murdered by the secret service, with his own hands.

The Colonel's second-oldest son, Mohammad Taghi, was killed in 1979 shortly after the beginning of the Islamic Revolution; Amir, the oldest, a man broken by prison and torture under the Shah, vegetates on the brink of insanity in the basement of his father's home.

Great hope for Iran's national independence: Mohammad Mossadegh was prime minister and head of the anti-British "National Front" in Iran from 1951 to 1953

​​Farzaneh, the Colonel's grown-up daughter, is married to a Khomeini adherent as ambitious as he is obsequious, and his youngest son Masud too has joined the ranks behind the black-clad Ayatollah. He is one of the countless "martyrs" of the first Gulf War, flung at the Iraqi forces armed with little more than hope for paradise. The Colonel will later have to pay his last respects to Masud's shredded corpse complete with a stranger's head, before his clothes have even dried from burying Parvaneh.

All this is certainly a healthy portion of drama. Yet it is still credible, firstly thanks to the oppressive, nightmarish atmosphere in which Doulatabadi assembles his narrative; and secondly through the realistic details of this leaden time after the Islamic Revolution – when the Islamists liquidated competing political groupings such as the Marxist-Leninist Tudeh Party or the People's Mujahedeen, while outmanoeuvring and silencing the liberal thinkers in the ranks of the clergy.

The novel, though, goes even further back in history. Whereas the Colonel's children appear and die as representatives of the various political movements around the Islamic Revolution, the Colonel himself lost his officer's rank under the Shah because he refused to support his policies, steered by western interests.

He experienced the brief period of hope when Mohammad Mossadegh attempted to lead Iran to economic independence in the early 1950s – along with the American intervention that reinstalled the Shah's puppet regime in 1953, a historical trauma that still casts a shadow over Iran's relations with the West to this day. And other, earlier heroes of Iranian history are present in the novel, all led to the gallows in the book's ghostly finale.

Does the novel not collapse under the weight of all this history? Yes and no. There are points at which the chronology of events becomes hopelessly tangled, and western readers will appreciate the help offered by the epilogue and glossary in the German translation. Yet ultimately, the novel is not a history lesson; instead, The Colonel is a page-turning panorama of Iranian mental anguish, producing visions and nightmares like dark exotic blossoms.

​​Take, for example, the Kafkaesque fantasy into which Amir escapes under torture, or the washing and entombment of the Colonel's murdered daughter Parvaneh as if by magic – placed precisely in the middle of the book as a lyrical nucleus, for good reason.

Take the aforementioned oppressive ostracism – in the original sense – of history that closes the novel; and the close and pregnant atmosphere that seeps right into your bones from the first to the last page, even in the cosiest armchair. And finally the deeply unsettling main character: despotic and liberal, great and narrow-minded, upright and opaque.

The Colonel's great pride is his refusal to spill insurgent blood in the service of the Britons and Americans, costing him his military career. Yet when he relives that heroic moment in a flashback, the ugly side of the coin is revealed as well. This "refusal", never explicitly pronounced, falls together precisely with the protagonist's fall from moral grace – the murder of his unfaithful wife – in such a way that this terrible deed can even be interpreted as a manoeuvre for the Colonel to evade his unpleasant orders.

Yet his relationship to his children transforms the dubious light that falls on the protagonist from this angle into a very different, painful ambivalence. Here, the Colonel does not act the role of the Oriental patriarch, as the "honour killing" might lead us to expect. Instead, he is a father who is bitterly punished for "having granted his children the most natural of all rights. He refused to simply condemn them to life; he wanted them to take their lives into their own hands."

But this, Doulatabadi's novel tells us with devastating clarity, is impossible under Iranian conditions. With its many fractures and twists, the country's history lays trenches between the generations, preventing parents from handing down their experiences and thus holding back progress itself. And the alternating powers-that-be go even further – "they creep under your skin, speak with your tongue and kill you in your own name."

No wonder the slippery opportunists like Allah Gholi Ghorbani Hadjadj, the Colonel's holier-than-thou son-in-law, or Rasul Khazar Djavid, a cynical secret service henchman, have the best chances of survival. The latter, who tortured prisoners under the Shah and now does the same in the new state, sums it up: "The political police are like a religion. Have you ever heard of religion being wiped out?"

The unholy alliance implied by this formulation also comes to the fore in the names of these two characters, each of which Doulatabadi writes in full at only one point in the novel. "Allah" needs no explanation, and "Rasul", "the messenger (of God) is a name given to the Prophet Mohammed. So it comes as little surprise that not even the German translation of The Colonel was allowed to be displayed at the Teheran book fair.

Mahmud Doulatabadi: Der Colonel. Translated from Persian to German and with an epilogue by Bahman Nirumand. Unionsverlag, Zurich 2009.

END_OF_DOCUMENT_TOKEN_TO_BE_REPLACED
Social media
and networks
Subscribe to our
newsletter