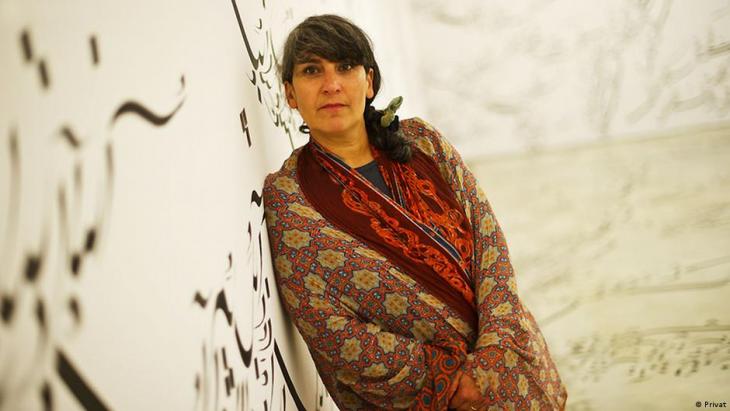 Iranian artist Parastou Forouhar has lived in Germany since 1991. Full of rage, just like the protesters, she hasn't yet given up on the idea of justice. By Julia Hitz

Mahsa Amini would have turned 23 on 21 September. She was arrested for allegedly not wearing her hijab properly. Why do you think she died in police custody?

Parastou Forouhar: It wasn't even that Mahsa Amini was refusing to wear a hijab, it was just that – supposedly – she wasn't wearing it properly! That's why she was mistreated and terribly beaten up. Now women are taking to the streets in protest. They refuse to wear the hijab and are burning their headscarves in public. Some women have even been shot in recent days.

How does that make you feel?

Forouhar: I am really livid, but at the same time terribly sad that young people are exposed to such brutality and have no chance of escaping this violence. Iranians are trapped. This religious dictatorship is nothing but a set of rules born of paternalism. For generations, Iranians have been striving for self-determination – only to fail repeatedly because of the brutality of the regime. 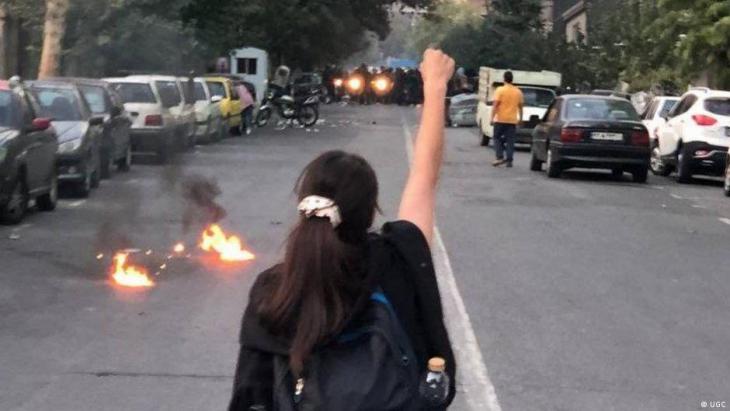 Protests in Iran following the death of 22-year-old Mahsa Amani: she was arrested by the morality police because her headscarf was too loose and died after the police brutally beat her. Since then, the anger of Iranians has been unleashed not only against the headscarf law, but increasingly also against the autocratic system of the Islamic Republic. However, there are fewer and fewer pictures of the protests because the regime has throttled the Internet, at times closing it down completely

A women's revolution against the mullahs?

You have experienced and suffered a lot in this regard. Your parents were murdered for political reasons in 1998. What do you fear in the current situation?

Forouhar: I am very worried. Especially because the regime has blocked Internet services such as WhatsApp. This is their way of isolating the country internationally so that no news gets out. Whenever there are protests, the government plans even harsher repression, mass arrests or shoots indiscriminately into the crowd. The security forces are becoming ever more brutal in their attempts to quell the protests.

It started on Wednesday (21.9.2022) with activists, known activists who have not even attended the current wave of demonstrations, being arrested in their homes. Security forces stormed their homes and just took them away. It was really very violent. There is no news yet about the fate of these activists.

British-Iranian actress Nazanin Boniadi declared on Twitter that the 1979 revolution was a revolution against women. And what we are seeing today is a revolution led by women. What’s your take on that?

Forouhar: Most Iranians who participated in the Islamic Revolution in 1979 did not see it as a revolution against women. They took to the streets hoping for freedom, independence and justice, but they were caught off guard by the religious forces. Despite the protests of Iranian civil society, they were able to seize power.

Boniadi is paraphrasing. But it is true that the regime is particularly hostile to women. It has introduced a kind of apartheid system against them. They simply do not have the same rights as men.

You have lived in exile in Germany for years. How do you cope with feeling so powerless? What do you do against the rage?

Forouhar: I try to go to Iran every year for the anniversary of the death of my parents, Parvaneh and Dariush Forouhar. Even though it is dangerous: an Iranian court sentenced me in absentia to a six-year suspended prison term. Still, I did manage to visit last year. 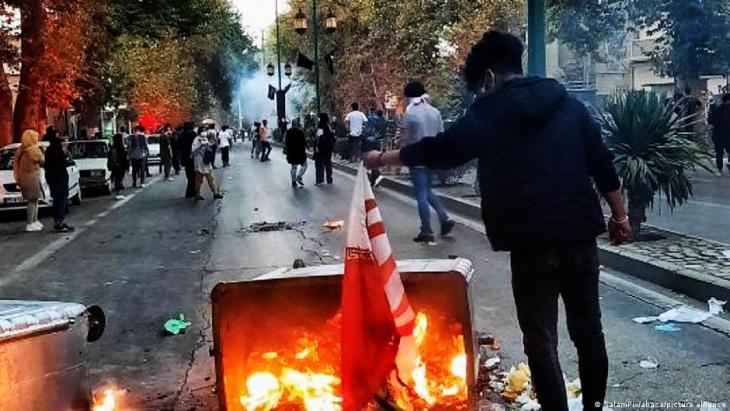 A women's revolution in Iran? British-Iranian actress Nazanin Boniadi wrote on Twitter that the 1979 revolution was a revolution against women. Today we would see a revolution led by women. Parastou Forouhar, however, does not believe that Iranians participated in the Islamic Revolution because it was directed against women. "They took to the streets hoping for freedom, independence and justice, but they were caught off guard by the religious forces," she says. "Despite the protests of Iranian civil society, they were able to seize power at the time"

The trip is always an act of resistance for me, to keep my parents’ memory alive and to insist on justice. I also do what I can to publicise and report on what is happening in Iran at the moment, to support the people on the ground. Change has to come from within, but democratic countries can support this movement in Iran.

How much hope do you have that things will turn out differently this time?

Forouhar: That is a difficult question. Every time people bravely take to the streets I get my hopes up. It is almost sublime what protests can produce. The human will and the vision to bring about a better life for oneself and society through resistance is inspiring. But the experience of repression runs deep. You are constantly battling images of regime brutality.

Many exiled women artists also speak out on social media. They try to give a voice to their colleagues on the ground. What can you contribute as an artist?

Forouhar: In such moments, I am first and foremost an activist, a citizen who has the task of carrying on this struggle. It is about creating an echo chamber for these people, their messages and impressions. Such a crisis makes me an activist. Later, these existential experiences will certainly also flow into my artistic work.

Giessen, Eichsfeld, Kusel, Berlin – cars bearing old German number plates are the latest trend on the streets of Cairo. Many Egyptians regard the discarded plates as chic. What ... END_OF_DOCUMENT_TOKEN_TO_BE_REPLACED

Tunisia has been going through a severe economic and political crisis in recent years. More than one in three young people there are unemployed. For many skilled, qualified and ... END_OF_DOCUMENT_TOKEN_TO_BE_REPLACED

German imams have publicly expressed their solidarity with the women of Afghanistan. In a letter of protest, the clerics say that the Taliban regime's decree barring women from ... END_OF_DOCUMENT_TOKEN_TO_BE_REPLACED

At the end of every year, the team at Qantara.de gives you a run-down of the ten most-read articles on the site over the past 12 months. Here is a quick overview of the stories ... END_OF_DOCUMENT_TOKEN_TO_BE_REPLACED

Social engagement is often motivated by religious factors. A new book explores the background to these community efforts and appraises how effective they are in helping to ... END_OF_DOCUMENT_TOKEN_TO_BE_REPLACED

The government in the Netherlands, one of the last European nations to abolish slavery, has made an historic apology. But some feel that there is still a long way to go. By Ella ... END_OF_DOCUMENT_TOKEN_TO_BE_REPLACED
Author:
Julia Hitz
Date:
Mail:
Send via mail

END_OF_DOCUMENT_TOKEN_TO_BE_REPLACED
Social media
and networks
Subscribe to our
newsletter