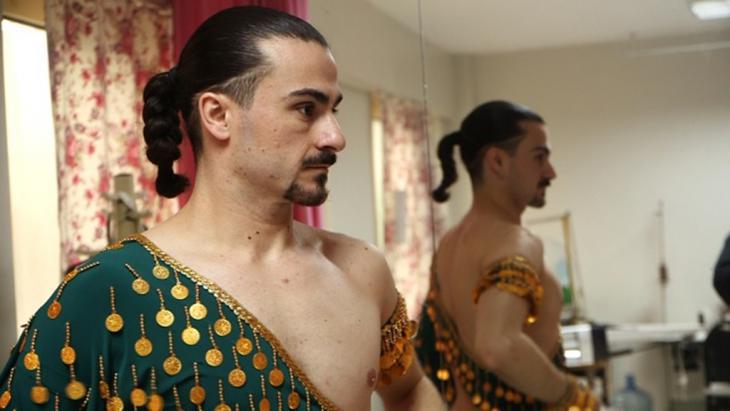 Male belly dancers in Turkey
Shimmying, swaying and gyrating to the beat

In Turkey, men are conquering the stage in the world of belly dance. The increasing popularity of male dancers is based on more than just the apparent novelty of their performances. In Istanbul, Cigdem Akyol met two belly dancers and spoke to them about their profession

In the beginning, there is just sound; just a booming beat. Then, after a few seconds, an Oriental rhythm fills the hall, spun by the DJ in the corner. With arms outstretched, Ali Murat Sahiner enters the huge room, casting the waiting audience a come-hither glance. A movement ripples through him, his arms undulate like waves, and the beat gets harder. Sahiner's hips twitch and the sparse silver jewellery adorning his naked torso and his sequined harem pants glitter in the disco light. Then he bends his whole body to the rhythm of the music – half rubber man, half artistic spectacle. A typical belly dancer. The show begins.

On this Saturday evening, some 300 guests are enjoying an evening in the "Zarifi" restaurant on Istanbul's Taksim Square. They are dining, but mostly drinking plenty of alcohol. Sahiner performs here every Saturday under his artist name, "Diva". Although two belly dancers take the floor after him, the 36-year-old with short black hair, wearing mascara and lipstick, is the main attraction. During his three-minute performance, he gyrates his pelvis energetically. The movements flow smoothly, while he keeps his head held high, a smile on his face. The impression is at once lascivious and elegant. There is not a bead of sweat in sight.

Sahiner is a "Zenne". This is the term for male belly dancers in Turkey. Although this initially looks like quite an exotic performance, masculine hip rolling actually has a centuries-long tradition. "Zennes" were immortalised on colourful miniature paintings during the Ottoman Empire, but back then men were only allowed to perform for men, and women only for women. Then this tradition disappeared into the, usually homosexual, underground, and belly dance became the preserve of women.

Today, tourists see Turkish belly dance as Oriental kitsch, feeling as if they've been transported back to the fairy-tale world of the 1,001 nights whenever they see a performance. In 2009, Turkish tourism minister Ertugrul Gunay called belly dance outdated and said he didn't want to see any more belly dancers in advertisements for his country. Is it an art form? A suggestive near-striptease? Even though many people like to watch the dancing, the dancers have the always had the image of roaming sex objects.

It was not until the feature film "Zenne" became an international hit in 2012 that the Turks rediscovered the world of male dancers. The film is about the difficulties faced by a gay belly dancer in a patriarchal society. In reality, however, male dancers are actually benefitting from current conservative social developments. After all, ever since Islam has become increasingly visible under the AKP government in the secular republic, things have got a whole lot tougher for female belly dancers.

"The more religious society becomes, the more gigs I get," says Sahiner. "Devout Muslims can better endure a dancing man than a scantily clad woman." In addition, it is considered chic to be able to afford a belly dancer at your wedding. At parties and in restaurants, more and more men can be seen with the typical rolling hips and shimmying movements.

During the performance, people don't stop talking or laughing as they greedily tuck into their food and smoke or drink. It is only when Sahiner jumps onto the bar and a spotlight sets his toned body aglow does he have the full attention of the guests. Again he spins around, faster and faster, framing his body with his arms and hands. Then the music stops, Sahiner descends, takes a grand bow and basks in the applause before disappearing into his dressing room, where he quickly lights a cigarette. 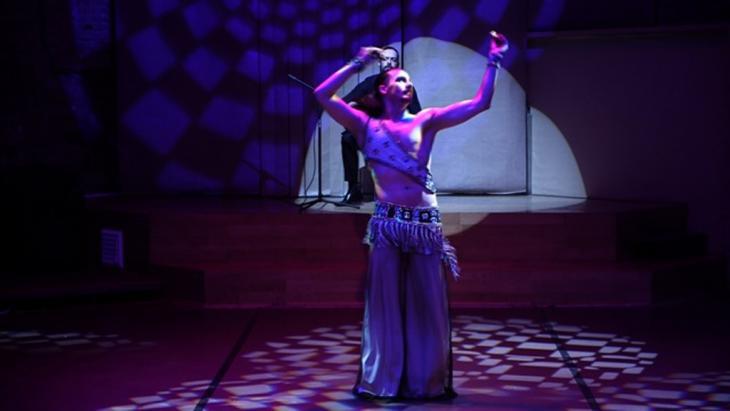 What looks like easy entertainment to the viewers is actually a highly demanding sport for the dancers. Sahiner has to train at least three hours a day in addition to rehearsals and performances. And then there is the smile; his smile can never fade! Only those who demand nothing less than perfection from themselves have a chance to make it from the restaurant scene onto the television screen. Only those with relentless drive who know how to market themselves can actually earn money at this job.

A few days after his appearance at "Zarifi", Sahiner is sitting in a café in the Tarabya district on the European side of the city, about an hour's drive from Taksim Square. He's not wearing any makeup, his hair is hanging over his eyes, and a thick winter jacket protects him from the cold wind. In stark contrast to his stage persona, he now seems fragile. He lives here on the quiet outskirts of the city. While conversing, he gently lifts his tea cup and speaks in a soft voice, smiling coyly.

He began to become interested in dance as a 20-year-old. "I'm able to express my feelings better with my body than I ever could with words." Sahiner broke off his studies and trained all alone, by watching videos. He sewed his scanty costumes himself. No, he says, he never took lessons. He had his first paid gig in the seaside resort of Bodrum, earning the equivalent of €3. "For me, that was a lot of money back then." Today, he says, he sometimes gets hundreds of euros for a single performance.

At first, his parents knew nothing of their son's job. A neighbour who saw him in a show gave him away. For weeks, his family shunned him, hanging up the phone whenever he called. Sahiner sticks his slender hands in his jacket pockets when he speaks of personal matters, of his divorce, for example, or of the fact that he would like to have a girlfriend again. Now the "Diva" is just a timid artist concerned about his future. After all, the business is merciless. "I don't know how much longer I can practice this profession. In the entertainment industry, they only want you when you're young. It will be harder and harder for me to keep up with the younger generation."

One of his rivals is sitting in a darkened gay bar on Taksim Square. Baha Pinar, very self-assured in a figure-hugging jumper and tight jeans, shows mobile phone pictures of himself as a belly dancer. "Zenne Baha", as he calls himself, loves to talk about himself. The 22-year-old has been dancing for four years. He too is self-taught. "Sometimes it takes me months to master a dance move. But I never give up; I've learned to deal with frustration." He says that his family have never had any problems with his homosexuality or his job. 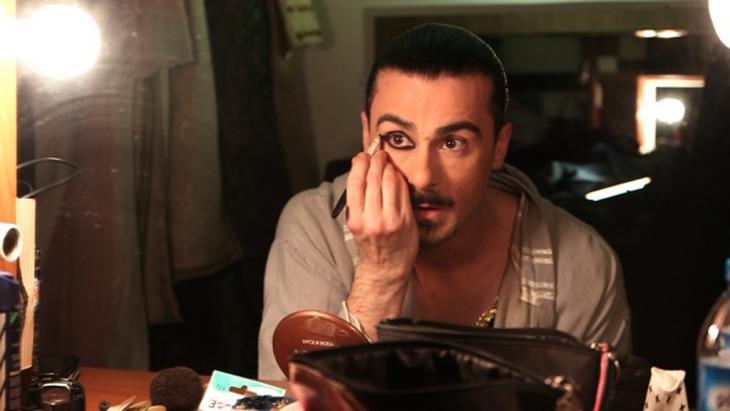 He too benefits from the conservative government. Female belly dancers are being hired less and less, he says, because bare skin in public is increasingly taboo. "And anyway, women don't want to have to watch women with whom they can never compete. And because our Turkish women are insanely jealous, they don't want their men looking at other women either." Vice versa, it is no problem at all: "Turkish machos could never be jealous of a gay man like me." That's why his female colleagues envy him his success. "But I can't change the situation," he says, shrugging and tossing back his black hair.

Pinar is now earning up to €200 per show and performing several times a week. Occasionally he has foreign engagements or is invited to appear on television shows. He is young, he is vain, he is ambitious – but he is also a realist. He wants to dance until his 30th birthday, and then he wants to devote his time to teaching: "Nobody wants to watch an old man dancing when he is out of breath."

Back at "Zarifi", it is almost midnight – time for Sahiner's second and last appearance. He has changed his costume into something equally colourful, covered in beads, rhinestones and sequins. The DJ puts on a song with a booming bass beat, and the dancer enters the room. Sahiner swings his hips, lifting and circling them. He shimmies his shoulders as his fingers make slow snakelike movements.

Music fills the room; the air is heavy with cigarette smoke. Sahiner is able to motivate the guests to join in. Body on body, they dance between the tables. Men dance up to him too, but only briefly. Women stick money into Sahiner's harem pants, just a hand span below his navel. After a few minutes, the show is over and the dancer once again disappears into his dressing room. All that's left is the sound.

The Kurds are under attack from two sides: from Turkey, and from Iran. The situation in their territories in northern Iraq is becoming increasingly desperate. Birgit Svensson ... END_OF_DOCUMENT_TOKEN_TO_BE_REPLACED

Canan Topcu came from Turkey to Germany as a child. In her essay, she describes how bothered she was by the racism she encountered in her country of origin when she travelled ... END_OF_DOCUMENT_TOKEN_TO_BE_REPLACED

According to Turkey’s revised media legislation, spreading "fake news" now carries a prison sentence. The definition of what this entails has been kept intentionally vague. ... END_OF_DOCUMENT_TOKEN_TO_BE_REPLACED

On 3 November 2002, Erdogan's newly founded AKP, Justice and Development Party, came to power in Turkey. It has ruled the country ever since, becoming more authoritarian with each ... END_OF_DOCUMENT_TOKEN_TO_BE_REPLACED

Kurdish journalist Nedim Turfent has been in prison in Turkey since 2016 – because he reported on police violence. A collection of his writings penned while behind bars is now ... END_OF_DOCUMENT_TOKEN_TO_BE_REPLACED

A survivor of a neo-Nazi hate crime, Mevlude Genc's boundless compassion served as an inspiration to an entire generation. Sertan Sanderson explores how her death is a loss for ... END_OF_DOCUMENT_TOKEN_TO_BE_REPLACED
Author:
Cigdem Akyol
Date:
Mail:
Send via mail

END_OF_DOCUMENT_TOKEN_TO_BE_REPLACED
Social media
and networks
Subscribe to our
newsletter