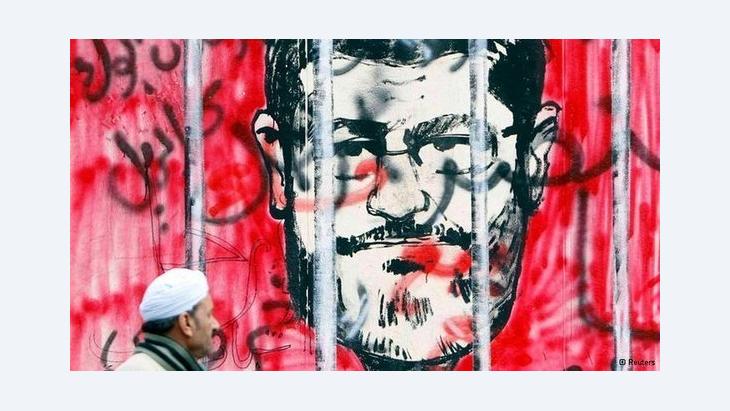 ﻿While most Egyptians may support Morsi's aims, a dramatic expansion of presidential power in order to attain them was, for many, a step too far. Morsi's decrees have undoubtedly polarized Egyptian politics further, says Omar Ashour

Mohamed Morsi, Egypt's first-ever elected civilian president, recently granted himself sweeping temporary powers in order, he claims, to attain the objectives of the revolution that overthrew Hosni Mubarak's dictatorship. But the decrees incited strong opposition from many of the revolutionary forces that helped to overthrow Mubarak (as well as from forces loyal to him), with protests erupting anew in Cairo's Tahrir Square.

Morsi has thus been put in the odd position of having to defend his decision against the protesters while simultaneously making common cause with them. "I share your dream of a constitution for all Egyptians and with three separate powers: executive, legislative, and judicial," he told his opponents. "Whoever wants Egyptians to lose this opportunity, I will stop him." So, was Morsi's "auto-coup" necessary to realize the revolution's avowedly democratic goals? 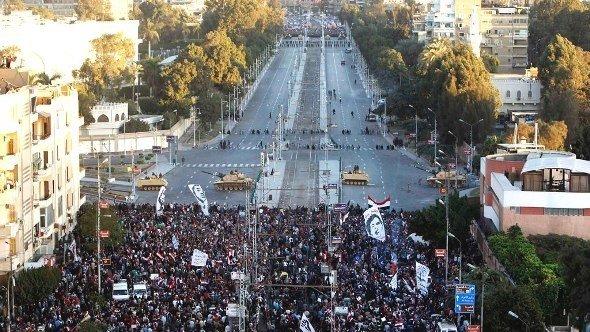 A nation divided: Egyptian opposition leaders rejected a national dialogue that Islamist president Mohamed Morsi had proposed as a way out of a crisis that has polarized the nation and provoked deadly clashes on the streets

​​Suspicion of the powerful

The new Constitutional Declaration, the Revolution Protection Law, and the new presidential decrees have several aims:

1. To remove the public prosecutor, a Mubarak-era holdover who failed to convict dozens of that regime's officials who had been charged with corruption and/or abuse of power;

2. To protect the remaining elected and indirectly elected institutions (all of which have an Islamist majority) from dissolution by Constitutional Court judges (mostly Mubarak-era holdovers);

3. To bring about retrials of Mubarak's security generals;

4. To compensate and provide pensions for the victims of repression during and after the revolution.

While most Egyptians may support Morsi's aims, a dramatic expansion of presidential power in order to attain them was, for many, a step too far. Given Egypt's extreme polarization and distrust between its Islamist and secular forces, Morsi should have anticipated the protests. Suspicion of the powerful, after all, has been one of the revolution's animating factors. Another is a "zero-sum" attitude: any achievement by Morsi is perceived by his opponents as a loss.

The anti-Morsi forces are sharply divided ideologically and politically. Nobel laureate Mohamed ElBaradei, a liberal reformer, has little in common with Ahmed El-Zind, the head of the Judges Club and a Mubarak loyalist. But the anti-Morsi forces that backed the revolution regard the price of cleansing the judiciary as too high, arguing that the constitutional declaration will lead to dictatorship. 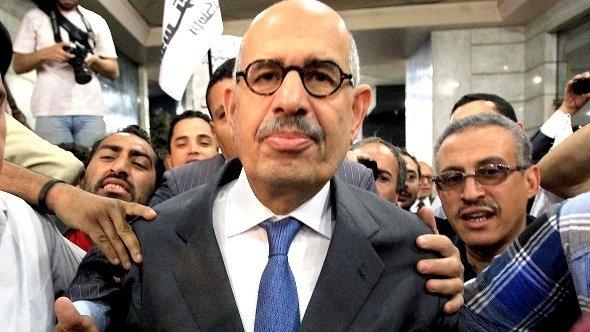 Mohammed ElBaradei, a leader of the liberal opposition and Nobel Peace laureate, said he expects the army to intervene if "things get out of hand". "Hardly a compelling democratic stance, given the army's track record," Ashour comments

Indeed, the declaration protects presidential decrees from judicial review (although Morsi stipulated that it pertains only to "sovereignty" matters, and stressed its temporary nature). It also gives the president emergency-like power to fight vague threats, such as those "endangering the life of the nation". Only if the new draft constitution is upheld in a popular referendum on 15 December will these provisions be annulled.

But the opposition factions have not been adhering to democratic principles, either. Mostly comprising electoral losers and remnants of Mubarak's regime, some aim to topple Morsi, not just get him to backtrack on his decree. ElBaradei, for example, "expects" the army to do its national duty and intervene if "things get out of hand" – hardly a compelling democratic stance, given the army's track record.

Morsi's decrees have undoubtedly polarized Egyptian politics further. Street clashes between pro- and anti-Morsi hardliners are proof of this. Historically, such clashes have often sparked civil war (for example, Spain in 1936 or Tajikistan in 1992) or brutal military coups (as in Indonesia in 1965 and Turkey in 1980).

For Morsi and his supporters, it was imperative to neutralize the Constitutional Court judges, whose ruling last June dissolved the first freely elected, post-revolution People's Assembly (the parliament's lower house). According to the Morsi camp, the politicized Court intended to dissolve the Consultative Council (the upper house) and the Constitutional Assembly, as some of its judges publicly hinted.

Likewise, the sacked public prosecutor had failed to present any solid evidence against those of Mubarak's security chiefs and officers who were accused of killing protestors, leading to acquittals for almost all of them. 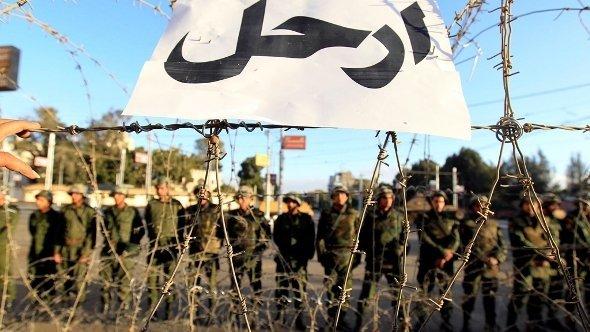 ​​As a president who was elected with only a 51.7 per cent majority, Morsi needs to be sensitive to the demands of his supporters, mainly the Islamists and revolutionaries victimized by the security forces. But, for many revolutionaries, there were other ways to sack a tainted prosecutor and cleanse the judiciary. For example, a new law regulating the judiciary has been a demand of the revolution since its early weeks.

For Morsi, the dilemma was that the Constitutional Court could strike down the law, rendering the effort meaningless. He had already backed off twice: once in July 2012, when he abandoned his effort, under pressure from the Supreme Council of the Armed Forces, to reinstate the elected parliament; and once when he tried to remove the public prosecutor by making him Egypt's ambassador to the Holy See.

Morsi's "Constitutional Declaration" was a decisive – though undemocratic, polarizing, and thus politically costly – step to break the impasse. And, while such decrees have led to dictatorships, not democracies, in other countries undergoing political transition, none had a politicized judicial entity that played the role of spoiler in the democratization process.

Indeed, almost two years after the revolution began, Egypt's security forces have not been reformed in any meaningful way. Now, Morsi, in his effort to force out the prosecutor, will have to avoid opening another front with the Mubarak-era security generals, whom he will need to protect state institutions and maintain a minimum level of public security.

The security sector may, it seems, emerge from this crisis as the only winner. It will enforce the rule of law, but only for a price. That price will be reflected in the constitution, as well as in the unwritten rules of Egypt's new politics. This constitutes a much more serious and lasting threat to Egypt's democratization than do Morsi's temporary decrees.

Omar Ashour, Director of Middle East Graduate Studies, Institute of Arab and Islamic Studies, University of Exeter, and Visiting Fellow at the Brookings Doha Center, is the author of The De-Radicalization of Jihadists: Transforming Armed Islamist Movements and From Good Cop to Bad Cop: The Challenge of Security Sector Reform in Egypt.

Alaa Abd el-Fattah, arguably Egypt’s most prominent democracy activist, has just been handed another lengthy prison sentence. Despite this, a book of his writing has recently been ... END_OF_DOCUMENT_TOKEN_TO_BE_REPLACED

People in Arab countries have been talking more openly about sex and sexuality for some time now, especially on social media. And for the first time ever, they have the vocabulary ... END_OF_DOCUMENT_TOKEN_TO_BE_REPLACED

A prominent rights group in Egypt, the Arabic Network for Human Rights, is ending operations just as the country braces for a controversial NGO law. Is this the beginning of the ... END_OF_DOCUMENT_TOKEN_TO_BE_REPLACED

Moncef Marzouki was Tunisia's first democratically elected president after the fall of dictator Ben Ali. Today he is the most prominent critic of increasingly counter- ... END_OF_DOCUMENT_TOKEN_TO_BE_REPLACED

Asef Bayat, professor of Sociology at the University of Illinois, Urbana-Champaign, has been studying revolutions and how they affect people since 1979. In his recent book, " ... END_OF_DOCUMENT_TOKEN_TO_BE_REPLACED

Every year in December, the team at Qantara.de takes a look back at the articles that proved most popular with our readers. This year is no different. Here is a run-down of the ... END_OF_DOCUMENT_TOKEN_TO_BE_REPLACED
Author:
Omar Ashour
Date:
Mail:
Send via mail

END_OF_DOCUMENT_TOKEN_TO_BE_REPLACED
Social media
and networks
Subscribe to our
newsletter