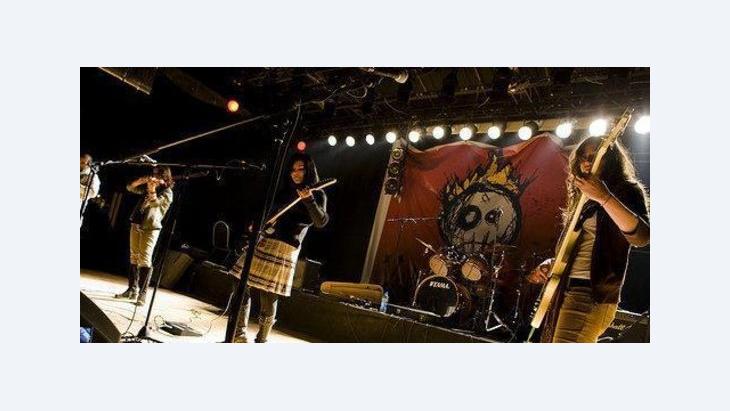 Massive Scar Era, or Mascara – that's the name chosen by the first successful Egyptian Heavy Metal band with almost exclusively female members. In this interview with Kristin Jankowski the band talks about their music and prejudices against female heavy metal musicians in Egypt

Heavy Metal can take many different forms. Sometimes the songs have a simple structure and there's lots of screaming and cursing. But in other cases there are nuanced melodies, the singing is almost opera-like, and soothing love songs are part of the repertoire. How would you describe your own style?

Mascara: We would say that we play 'pure music', and we avoid swear words or Satanic ideas. Our music is a mixture of Heavy Metal, western sounds and of course our oriental roots. And then the violin always adds a touch of classical music. In our songs, we speak out about everything that affects us. Emotional confusion, drug addiction, misunderstandings, prejudice – all the things that move us in some way.

Music is always a form of personal expression as well. To what extent are you able to live out your feelings in your music? 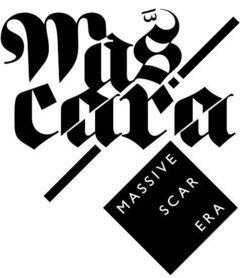 Big in the West: Sherine Amr (singer and guitarist), Nancy Mounir (violin), Perry Moataz (bass) and Magued Falyas (percussion) have already performed at the 2010 Cornerstone Festival in the USA and at the 2009 Sweden Rock Festival

​​Mascara: We would go so far as to say that we can only truly express ourselves through music. When we're really angry, sad or happy – we write music.

Alice Cooper, Led Zeppelin and Black Sabbath are among the fathers of Heavy Metal. Who are your intellectual mothers and fathers?

Mascara: As we all have different musical tastes, we are influenced as a band by very diverse musicians. But we all agree that Killswitch Engage is an incredibly impressive band. We love everything about their music.

The lyrics of Heavy Metal songs are often about violence, hatred, anger and provocation. What do you sing about?

Mascara: We have songs in which we talk about war and drugs and how these things have a negative influence on our world. But we also sing about issues that interest women, such as emotional insecurities, or how it feels to be harassed on the street.

Dress plays an important role on the Heavy Metal scene. For you as well?

Mascara: No! To see us, you'd never think we play Metal music. We are totally normal people; we look completely ordinary, even though each one of us has her own style. But we don't stand out from those around us.

You are one of the first Heavy Metal bands in Egypt to consist almost entirely of women. What kind of prejudices do you come up against?

Mascara: First of all, there were our parents, who even today still consider the whole thing to be a weird scene with weird people – which they happen to be right about, incidentally…

It took people some time to realise that we don't take drugs and are quite conservative on some issues. The whole Metal scene is after all automatically associated with drugs and alcohol.

And as a band we also have to struggle with some preconceptions. It took two international festivals – in Sweden and the United States – to show people: Here we are, we exist, we are original – and yes, we are able to play music!

You've been well known on the Egyptian rock music scene for several years. What's so special about this culture?

Mascara: The thing that defines rock culture everywhere is the attitude. It's loud, you have to take notice and listen. It grabs your attention. It's "heavy". It rocks!

Which band would you love to share the stage with someday?

Mascara: We've basically already played with all the Egyptian bands we like. But at the moment we're considering playing with the electro band Neyobird. Their composer and keyboardist, Wael, could record all our songs with us; that would definitely give us a new sound.

Mascara: We want to play in Germany. We have already done so many interviews for German magazines and it seems like the people there like our music. And at the Sweden Rock Festival we also got good reviews from Germans. So Germany is next up on our schedule. Naturally we also want to produce our album, but we need more money for that.

What is your message to young women who would like to achieve success with Heavy Metal?

Mascara: We advise them to really work hard and to attend the workshops offered by Fathy Salama. We know that they have nothing to do with Metal, but some musical basics are helpful when it comes to composing and playing.

Also: avoid male teachers, unless you take courses at an official institute.

The Internet is full of free learning material. People, in particular males, often have a totally wrong impression of female Metalheads and tend to stereotype them. So avoid, avoid, avoid that – for your own good.

Home
Print
Newsletter
More on this topic
Heavy Metal in Egypt: Respectable Rebels"Taqwacore: The Birth of Punk Islam": As Rebellious As It Gets
Related Topics
Arab music, Musical worlds
All Topics

Social media make many things possible – including the unwanted circulation of intimate private photos. This has given rise to new forms of crime and sexual blackmail. An ... END_OF_DOCUMENT_TOKEN_TO_BE_REPLACED

The change in U.S. president is also having an impact on the conflict between Turkey and Greece. Since the USA has started to play the Greek card, the strategic situation in the ... END_OF_DOCUMENT_TOKEN_TO_BE_REPLACED

Arab women played a leading role in the protest movement of 2011. Since then, ongoing social transformation has had a considerable impact on their lives. What is their assessment ... END_OF_DOCUMENT_TOKEN_TO_BE_REPLACED

They’ve already got the Louvre; they’ll soon have a Guggenheim Museum as well – and now the Emirates have added literature to their quest for cultural supremacy in the Arab world ... END_OF_DOCUMENT_TOKEN_TO_BE_REPLACED

Years in the making, Sisi's elite New Administrative Capital will isolate most Egyptians from their centres of government in an effort to fortify the regime against any social ... END_OF_DOCUMENT_TOKEN_TO_BE_REPLACED

Professor Timothy Brennan's "Places of Mind: A Life of Edward Said" is a detailed biography of one of the most important intellectuals of the twentieth century, taking us on a ... END_OF_DOCUMENT_TOKEN_TO_BE_REPLACED

Comments for this article: Women's Heavy Metal from Alexandria

Judjing by their music.. I think it is very bad .. looks like the group do not know what they are doing .. it also shows from the different variations of their logo...they are jumping around ....I think somebody gave them guitars and they did not know how to use it ... total failure ... nevertheless I wish they revise their music ... consult somebody before emerging into the market like this with no substancel...too bad

END_OF_DOCUMENT_TOKEN_TO_BE_REPLACED
Social media
and networks
Subscribe to our
newsletter