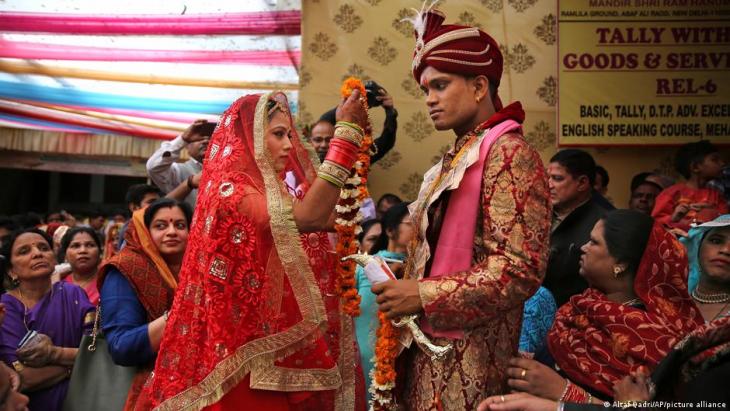 Matchmaking among Indians
Why do Indian expats in Europe still seek an arranged marriage?

Arranged marriages have been the norm in India for centuries. Now online dating sites, the "marriage market" and changing social norms have seen matchmaking services evolve – especially for Indian expats in Europe. By Shabnam Surita

"I need to get married in three months. Please help me. I need to find a wife." This is one of the many requests that Malaika Neri, a professional matchmaker based in Europe gets on a regular basis. Highly qualified Indian expatriates – working as engineers, IT professionals, in finance, as consultants or project managers – all come to her in search of a suitable partner.

The idea of having a marriage set up by a third party – by family, friends or neighbours – has been the norm in India and South Asia for centuries. However, arranged marriage is becoming less popular as dating without parental involvement becomes more socially acceptable and intercultural marriages are less of a taboo.

To address this change, many matrimony professionals are opting for new methods and offering alternative approaches to matchmaking, allowing people to have comparatively more control over their choice of relationship than their family or society.

Matchmaking in India has undergone an image makeover in the last two decades and pop culture has contributed to legitimising it as a profession. One such example is the recent Netflix series "Indian Matchmaking." Here, matchmaker "Seema Aunty" is shown matching affluent Indians living and working in the US. 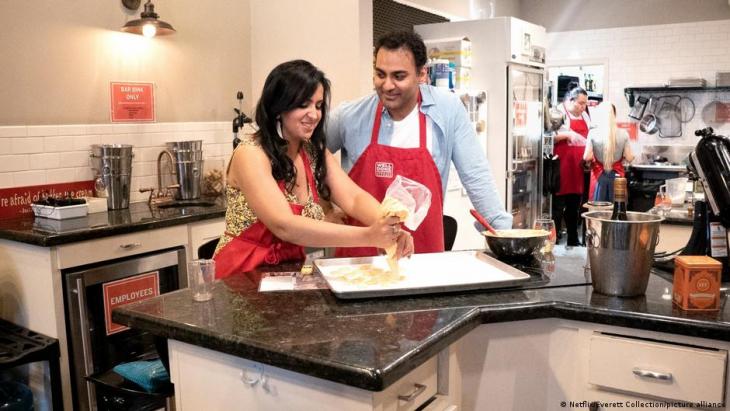 Still from the Netflix series "Indian Matchmaking" in which clients go on normal dates but also get advice from astrologers. Malaika Neri, a professional matchmaker based in Europe, likes to work with committed individuals who are looking for matching lifestyles and values in their partners. She says that matching castes and horoscopes "do not make a happy marriage"

Originally from Mumbai and today living in Europe, Malaika Neri works as a relationship consultant, helping ambitious professionals, from India, the US, UK and Europe, find love, and hopefully marriage. Rather than tight deadlines, Neri prefers to deal with committed individuals looking for matching lifestyles and values in their partners.

Indian clients from Europe are different from those from the US, she says, and that leads to different relationship needs.

Many of the people Neri works with are from smaller Indian cities, often "the first in their family to go to university, and [they] come from middle class backgrounds. They come from families where arranged marriage has been the norm for centuries," she says. "Dating is taboo, and often they do not necessarily have any experience of meeting and dating the European way. So suddenly they find that finding a partner in cities like Stockholm or London is incredibly overwhelming, because they have little to no experience dating."

To understand how Indian expats perceive arranged marriages in Germany, one of the European countries with the largest Indian diaspora populations, DW reached out to groups on social media. A number of people responded, including Rashmi*.

Rashmi's husband's family had been living in Germany for around 60 years and when the time came to look for a suitable bride for their son, his family put up an advertisement on Anandabazar Patrika, India's leading Bengali-language newspaper.

Rashmi's mother chanced upon the advertisement and contacted the family. As a result, Rashmi got married and moved to Germany to join her husband. She told DW that friends of her husband had similar stories of having found their partners this way.

However most Indian expats DW spoke to said they found their partners online, on matrimonial websites meant for Indians. One such website is Bharat Matrimony, which has regional offshoots to cater to customers with a specific mother tongue, religion or caste. 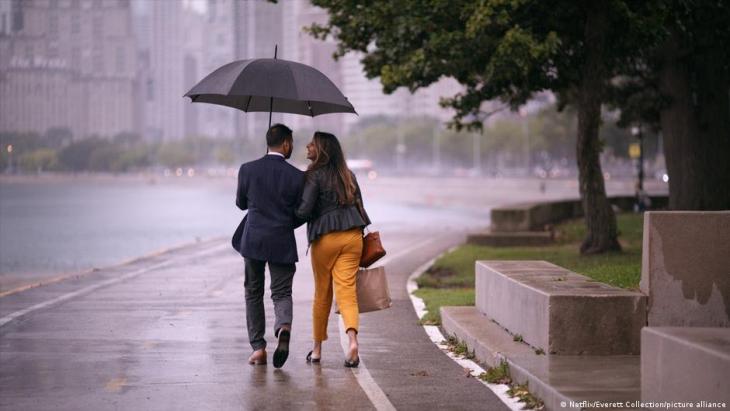 According to Shabnam Surita, although arranged marriages have been the norm in India and South Asia for centuries, they are growing less popular as dating without parental involvement becomes more socially acceptable and intercultural marriages are less of a taboo. Pictured here: still from the Netflix series "Indian Matchmaking"

Preethi* met her husband on Kerala Matrimony, one such website, where most members create their own profiles rather than having one created for them by parents or relatives. For Preethi, the process worked well as she spent a lot of time getting to know her partner before taking the plunge.

"For me it was clear – I get along with this person," she said. "We have our priorities matching. And he was the kind of person I would have loved to find in a love marriage."

According to Preethi, these sorts of services can also help introverts, people with no prior relationship experience or anybody pressed for time to find partners.

Finding companionship in a foreign land isn't the only reason why expats go to matchmakers like Neri. Often, the societal pressure to get married and bear children is so strong that people set strict deadlines for matchmakers.

And then there are also caste or religious boundaries, which families advise their children to stick to while choosing partners. Rashmi told DW about Indian families in Germany using the diaspora networks to arrange matches for their children, from families with a "similar background."

"A vast majority of my clients come from backgrounds where caste and community are the top drivers of your choice of life partner," she noted. "But I was raised in a household where caste was never mentioned. I have people reaching out to me asking for a caste-based match. To them I say that I am not the right person to help. There are other matchmakers who offer services based on caste, but just a matching caste or a matching horoscope do not make a happy marriage." 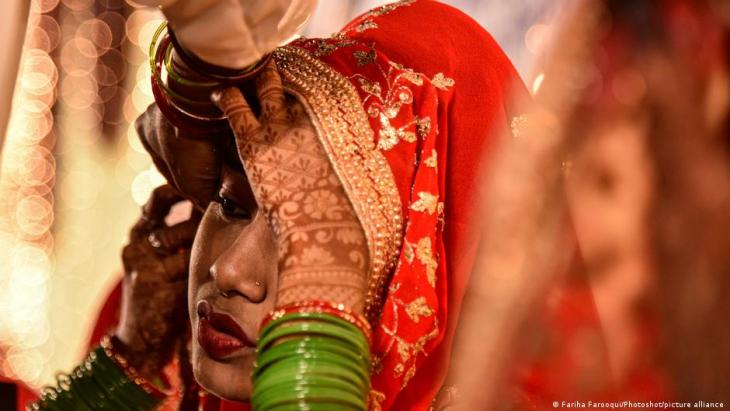 "The online matrimony market in India has doubled in size over the last five years and is today estimated to be worth around $260 million (€255 million), according to a study by Google and the consultancy KPMG in India," writes Shabnam Surita

The online matrimony market in India has doubled in size over the last five years and is today estimated to be worth around $260 million (€255 million), according to a study by Google and the consultancy KPMG in India.

Globally popular dating sites like Tinder and Bumble are comparatively new entrants to the Indian market. The matchmaking websites – which have been around since as early as 1997 – are mostly used by people who are searching for someone to get married to, rather than to date.

One of the reasons why digital matchmaking has become acceptable to Indians, at home and abroad, is the agency these systems offer to the individuals, said Preethi.

Consultant psychologist Anuttama Banerjee has also noticed this trend in India and finds it intriguing that Indian individuals using the dating sites "claim agency" even while making more pragmatic decisions about arranged marriage.

Beyond giving control to individuals, the matrimony websites are also "money-making businesses," says Hamburg resident Neerja*. In fact, memberships are cheaper if one applies "from India as compared to when made from the UK or the US," she said.

The unavoidable correlation between the marriage market and human relationships is something that Banerjee draws attention to.

For her, "it is somewhat concerning that people are compelled to give their time for work rather than organically exploring relationships. And then they compensate for this loss of time by outsourcing the solutions, which in this case, is a relationship."

*Names marked with an asterisk have been changed to maintain privacy.

Home
Print
Newsletter
More on this topic
The "India Love Project" on Instagram: Fighting hate with loveMuslim marriage, Muslim divorce – and the wider family: "Problems are often dealt with collectively"Marital traditions in the Islamic world: Marriage first, love later?
Related Topics
Muslims in the West, New media in the Muslim world, Sexuality and eroticism in Islam, Women in the Islamic world
All Topics

Since Ali Khamenei, Iran's most powerful man, has openly and unconditionally come out in support of Putin's war in Ukraine, logistical help is on its way, with an allegedly ... END_OF_DOCUMENT_TOKEN_TO_BE_REPLACED

Tourists have been returning to Tunisia, Egypt and Morocco. But, given the global uncertainty caused by the Ukraine war, will the comeback be enough to save a struggling sector, ... END_OF_DOCUMENT_TOKEN_TO_BE_REPLACED

The highly controversial Indian blockbuster "The Kashmir Files“, on the exodus of Kashmiri Hindus in the 1990s, is characterised by unilateral representations, negative ... END_OF_DOCUMENT_TOKEN_TO_BE_REPLACED

"Flugt" is the world's first museum dedicated to the stories of those forced to flee. The new museum, which focuses on the fates of refugees then and now, is housed in a former ... END_OF_DOCUMENT_TOKEN_TO_BE_REPLACED
Author:
Shabnam Surita
Date:
Mail:
Send via mail

END_OF_DOCUMENT_TOKEN_TO_BE_REPLACED
Social media
and networks
Subscribe to our
newsletter