In Mauritania, one of the poorest countries in the world, a large section of the population still suffers under slavery and its consequences to this day. Mona Naggar reports on the most recent successes in the fight against this historical burden 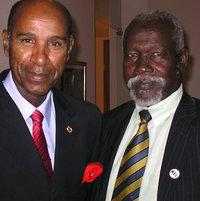 ​​Boubacar Ould Messaoud knows about slavery from his own experiences. His parents were forced for decades to work as slaves. At school, he was mocked as a slave. For many years, the architect Boubacar Ould Messaoud has led a committed fight against slavery in his country. He is one of the founders of the organization SOS Slaves and also serves as its chairman. The small, round black man with a white beard has reason to be pleased. After decades of treating the issue as taboo, there is finally some movement towards addressing the issue in this Northwest African country. Last summer, the parliament passed legislation making slavery a punishable offence. Ould Messaoud sees the new law as a positive step. He says it reflects the political will of the government and also that of the country's president, who was elected last March, to recognize and seriously address the problem. Although slavery has long been abolished in Mauritania, the previous law passed in the 1980s has never been implemented. There are no exact statistics on the scale of slavery in Mauritania. International organizations estimate that around half of the country's population of three million is affected by the phenomenon. The problem concerns not only slaves, but also the so-called Haratins, former slaves and their descendants. No paradise for the disobedient Boubacar Ould Messaoud defines a slave as someone who works day and night for his or her master without receiving any pay. The slave lives together with the master and can be passed down through inheritance. The master can also determine the fate of the slave's children. Both men and women are forced to tend livestock, do farm work, or domestic chores. Religion is also misused to support slavery. "Many here hold the belief that a slave cannot enter paradise unless he is obedient to his master." The phenomenon of slavery developed historically and has little to do with skin color. The practice originated at a time when tribes fought against each other, transported caravans of salt or gum arabic throughout the country, and sometimes abducted individuals and sold them. There are no new cases of people being enslaved, but the status of slave can be passed down from parent to child. Slavery has left behind deep scars in Mauritanian society. In the capital city Nouakchott, where one third of Mauritanians now live, the social implications of the problem are clearly visible. The majority of slum dwellers are Haratins. They are underrepresented in the country's schools and, similarly, very few own farmlands. Marriage to a Haratin is a societal taboo. Contrary to the Koran For Cheikh Saad Bouh Kamara, the new law, which makes slave ownership a punishable offence, is only the first step in breaking out of the vicious circle that still traps thousands of people. Bouh Kamara, member of SOS Slaves and Professor of Sociology at the University of Nouakchott, demands a comprehensive mobilization of society. "We have to work together with Imams. We have to go to the mosques and tell the people there that slavery is contrary to the Koran. We have to change people's attitudes. In my role as a professor, I educate trainers who are then sent to the countryside to inform people and establish new sections of our organization." The organization SOS Slaves also broadcasts its message on the citizen's radio station "Radio Citoyen." This provides the opportunity to come into contact with affected listeners and educate the public on this issue. In addition, the organization has set up various projects in an attempt to show slaves and former slaves how to survive on their own. "They have to stand on their own two feet economically, or else they will fall back into the old structures," says Bouh Kamara. Overcoming slavery and its consequences in Mauritania will take generations. Yet, the chairman of SOS Slaves, Ould Messaoud, is optimistic. "Today, we are all fighting together – the Haratins, the children of slave owners, and family members of the upper class. Many are now against slavery!" Mona Naggar © Qantara.de 2007 Translated from the German by John BergeronQantara.de Zanzibar Film Festival Dealing with the Gruesome History of Slavery Zanzibar was once one of the largest slave markets in the Indian Ocean area. Consequently, this year the Zanzibar International Film Festival's focus was on films that deal with the issue of slavery. Detlef Langer reports about the programme and the heated debates it stirred The Crisis in the Western Sahara The Forgotten Refugees of Tindouf Under the auspices of the United Nations, discussions are underway between Morocco, the Polisario liberation movement, Algeria and neighbouring Mauritania about a conflict that has been ongoing in the Western Sahara for more than 30 years. A report by Hassan Znined The EU's Common Asylum Policy Rights on the Edge One gets the impression that the aim of the EU's common asylum policy is not to protect refugees, but to protect Europe from refugees, says Karl Kopp in his commentary

END_OF_DOCUMENT_TOKEN_TO_BE_REPLACED
Social media
and networks
Subscribe to our
newsletter