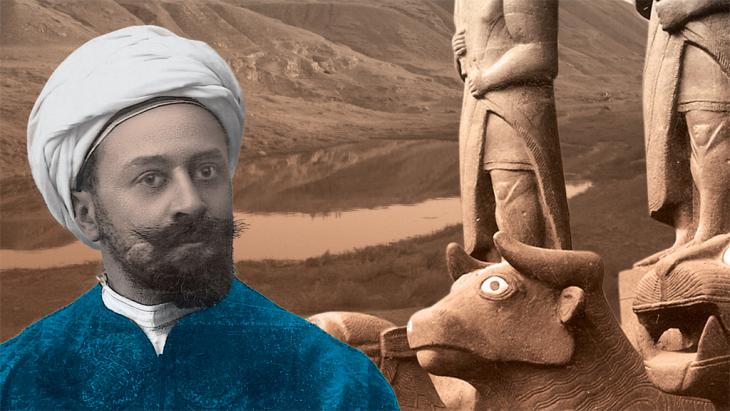 As diplomat and explorer, Max Baron of Oppenheim's knowledge of the Orient was exceptional for the time. His interest in the Arab world was unique as well in that it was free from condescension. A portrait by Andreas Pflitsch

​​Last fall, when the Frankfurt Book Fair featured the Arab world as its guest of honor, the German publisher Olms Verlag reprinted several classic accounts of travel in the Orient. One of the unquestionable highlights of the opulently produced series is Max Freiherr von Oppenheim’s account of the journey he took in the summer of 1893 from Beirut to Syria, Mesopotamia, Oman and Zanzibar.

Born in 1860 in Cologne, von Oppenheim was drawn to the Orient ever since reading stories from the Thousand and One Nights as a child. After studying law – urged by his father to learn a serious profession – in the winter of 1883/84 he accompanied his uncle to Athens, Constantinople and Smyrna (Izmir).

A well-read expert on the region

ore trips were to follow, such as one from Morocco through North Africa to Cairo, where he spent seven months living in a traditional Arab quarter. When Oppenheim set out on his journey “from the Mediterranean to the Persian Gulf”, he was an experienced, well-read expert on the region.

And the two-volume work is much more than a travelogue in the strictest sense; rather, it lives up to the objective stated in the foreword to “depict the country and people in their historical development and their ethnographic and religious peculiarities.” Oppenheim consults previous travel accounts as well as the relevant scholarly literature of his day.

Informative digressions, such as the outstanding chapters on the Druses or the desert city of Palmyra, alternate with descriptions of life on the road. Neither the geological details nor the historical developments from the Ancient Orient to the end of the 19th century are neglected.

During his 7-months stay in Cairo, Oppenheim lived in the traditional Arab quarter and hardly ever visited the European part of town

Oppenheim’s travelogue – a horn of plenty

The meticulously-recorded itinerary (“At 11:05 we observed a rectangular reservoir of 7 by 10 m. to our left, next to it a heap of rubble”) occasionally encourages skimming, however. Botanical digressions jostle observations on art and architectural history. In short: a veritable encyclopedia, a horn of plenty generously, indeed opulently illustrated with photographs, maps, ground-plans and sketches.

Little is lost on the curious, sharp-eyed observer, neither the “still quite backward” Beirut book market, nor the quantity of hosiery imported from Germany to Beirut in 1895, nor the quality of Syrian wine (“similar to Algerian wine”).

One also finds many curious bits of information. In “Bêrût, a city of steadily-growing prosperity,” where his account begins, Oppenheim encounters “Bohemian ladies’ orchestras” which “often make their fortune in the Levant and end with nuptials.”

An account free of the typical arrogance of the time

For all his fascination with history and archaeology, he does not ignore the rapid changes of his time. In Baalbek he runs across “a huge Cook’s travel camp with the usual retinue of servants and interpreters” and complains that the interior of the Temple of Jupiter has been disfigured “by numerous inscriptions by tourists of all nations”.

He notices the fact that the traditional mattresses that are stored in closets during the day are being replaced by “iron European beds with devices to hold mosquito nets”, along with other manifestations of progress and modernity. Written with sober elegance, the account is full of information and variety and largely free of the typical arrogance of the time.

By the time Oppenheim prepared his travel notes for publication, he was working as a diplomat at the German consulate general in Egypt. After discovering the Hittite mount Tell Halaf on another journey to Syria, he turned to archeology.

The turmoil that followed World War One and the end of the Ottoman Empire kept interrupting his project. Between the wars he established a foundation and a Tell Halaf Museum in Berlin; the museum housed the artifacts unearthed by the excavation and the valuable collection of Islamic art which he had acquired on his journeys.

The result of decades of work was destroyed when bombs struck both the foundation headquarters and the museum at the end of World War Two, and looting took care of the rest.

Oppenheim fled from Berlin to Dresden, of all places, where he lost what remained to him in the destruction of the city. Max Freiherr von Oppenheim died on November 15, 1946 in Landshut. Given the tragic circumstances of the last years of his life, it is especially gratifying to see his travelogue reprinted. It is comforting to see that something has survived after all.

Research project "The Global Qur'an", brainchild of Professor of Islamic Studies Johanna Pink and sponsored by the European Research Council, analyses the history and ... END_OF_DOCUMENT_TOKEN_TO_BE_REPLACED

As the Western world emerges from a holiday season made less festive by COVID-19, millions of children in Afghanistan are starting 2022 facing the prospect of famine, illness, and ... END_OF_DOCUMENT_TOKEN_TO_BE_REPLACED

A wedding extravaganza of bright colours, flowers, feasting and dancing, yet the bride, Nefie Eminkova, who comes from Bulgaria's Pomak – Muslim – minority, can see none of it. ... END_OF_DOCUMENT_TOKEN_TO_BE_REPLACED

Every year in December, the team at Qantara.de takes a look back at the articles that proved most popular with our readers. This year is no different. Here is a run-down of the ... END_OF_DOCUMENT_TOKEN_TO_BE_REPLACED

Jesus – Issa in Arabic – doesn’t merely enjoy the highest place among the prophets in the Koran. He is also revered in Islam’s mystical tradition for his message of love and mercy ... END_OF_DOCUMENT_TOKEN_TO_BE_REPLACED

The military in Sudan has never waged war against a neighbour, but it has already staged 17 coups. Tens of thousands of people are risking their lives to oust the military by ... END_OF_DOCUMENT_TOKEN_TO_BE_REPLACED
Author:
Andreas Pflitsch
Date:
Mail:
Send via mail

END_OF_DOCUMENT_TOKEN_TO_BE_REPLACED
Social media
and networks
Subscribe to our
newsletter