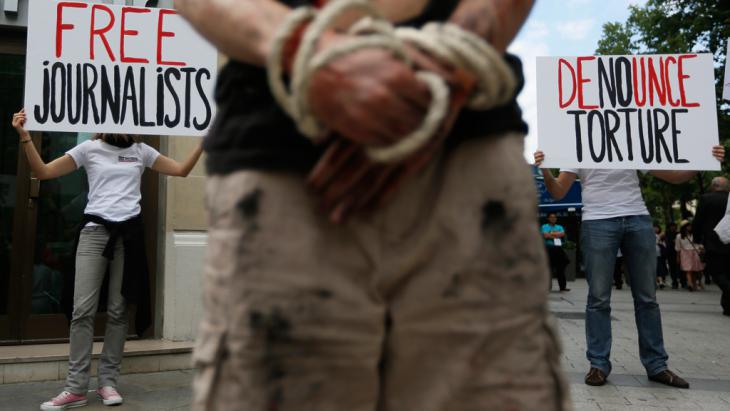 Media portrayals and geopolitics in the Near and Middle East
Who shapes our image of the world?

In this commentary, Charlotte Wiedemann considers how press freedom and the media are tethered to Western geopolitics

The Iranian government gave the nation's media a few pointers on how to report on the Vienna nuclear deal: reports should be positive, optimistic, and every time a Western politician is quoted, the response of an Iranian official should also be included!

Our media would not of course stand for such a thing. In the recent, high-profile case of the German blog netzpolitik.org, the presumptions of the intelligence services and public prosecutors in Germany were roundly and resoundingly rejected. It was all reminiscent of the Spiegel Affair of the early 1960s, when a senior German politician accused "Der Spiegel" news magazine of high treason for publishing what it said were state secrets. In the rare cases when attempts are made to infringe upon press freedom in this country, the sector swiftly mounts the barricades, with older members of the profession who work for public broadcasters leading the charge.

The race for a new market

In actual fact, there's recently been an astonishing change in how our media have been reporting on Iran. Western business delegations are falling over themselves to get to Tehran. The competition for the new market has begun, and lo and behold, the mood in the media has become more positive!

The number of executions being carried out in Iran is higher than it has been for a long while; journalists, artists and lawyers are being sentenced to long prison terms. But none of that is as acutely interesting as it was; after all, German exports must make their way to Iran.

As long as the geopolitical mood was dominated by the US desire to usher in regime change in Tehran, many media engaged in a demonisation of Iran. In no dictatorship, except North Korea, did the prisons appear to be worse. Now Iran has become an example of how a viewpoint can change along with a change in the general political atmosphere. Since the signing of the deal in Vienna, Iranian human rights violations have abruptly ceased to be so important.

No pointers were needed to bring about that change. 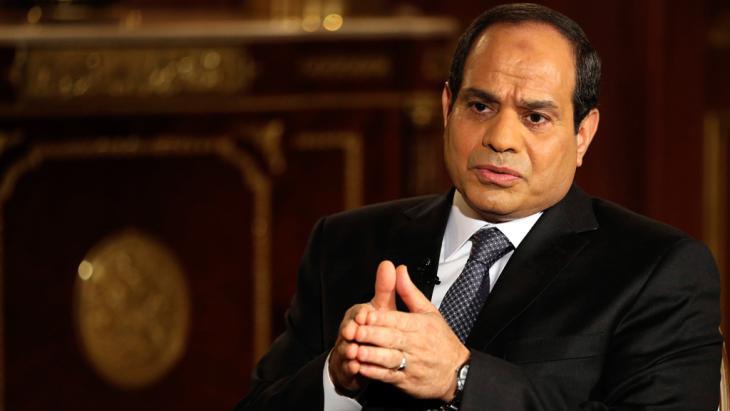 No tolerance for reports that don't reflect the official version of events: the situation for independent media representatives has taken a dramatic turn for the worse under Egypt's President Abdul Fattah al-Sisi (pictured here). The Committee to Protect Journalists (CPJ) says that 18 reporters are currently in prison – more than there has been for at least a quarter of a century. Human rights activists believe this figure is much higher

The Egyptian government threatens to lock up journalists if they report on a terrorist attack in a way that deviates from the official version of the event. Fortunately, the situation here is very different. That being said, when do we discover something about the War on Terror that starkly diverges from the statements issued by the key Western security agencies?

Take the matter of drones, for example: the media portrayal of the drone war in Afghanistan and Pakistan is indeed based on officially distributed information, namely information from the CIA. Recently, 30 people were fired upon as they left a funeral. Without the provision of any evidence, they were declared to be Taliban (in other cases members of al-Qaida or IS). The London-based Bureau of Investigative Journalism provides a different account. A not-for-profit organisation – like the afore-mentioned netzpolitik.org – it is preserving the honour of the sector, which doesn't deserve it.

According to the Bureau of Investigative Journalism, in 646 drone attacks in Pakistan, Somalia and Yemen investigated by the bureau, 225 children were found to be have been killed. Even if this shocking figure is too high, how many of these children's deaths made it onto the front page of a major Western newspaper?

Which life, which death counts?

Anyone wishing to know how our everyday perception of the world is shaped must ask a simple question: which lives, which deaths count – and who is deciding how and when the relevant figures are totted up?

Drones are not peripheral to this, because these are the conflict weapons of the future. The concerns of air force personnel in the US have become more audible in recent times: it is not only the pilots of the drones that suffer from trauma; dozens of analysts and technicians are involved in every mission. Anti-drone activists are now demanding a veterans' hearing modelled on the Winter Soldier Investigation of 1971, which provided the public with a different version of the Vietnam War.

If the perception of foreign suffering is stifled for ideological reasons, it can help to see the suffering of one's own people who are assigned to commit such acts. 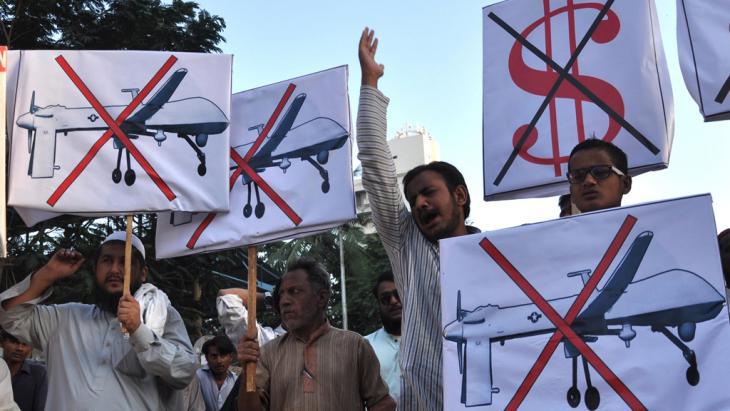 Protests in Pakistan against the deployment of drones: US forces are not only deploying unmanned fighter jets against Islamic State jihadist militia in Iraq and Syria, but also in Pakistan, Afghanistan, Yemen and Somalia. Many civilians have been killed in such attacks in the past, mainly in the border zone between Afghanistan and Pakistan. Human rights activists say using drones against terror suspects is equivalent to execution without trial

The comparison with the Vietnam War also shows, however, what has changed since the start of the War on Terror, namely that it has become extremely difficult to denounce one's own, Western side. In the past, agreeing to a war used to require justification. These days, anyone opposing a war must justify their stance.

An intellectual-political hegemony has arisen here, one in which positions based on content are only perceived as such if they are something other than what has been silently agreed. The same applies to decisions regarding what is reported – and how.

In these circumstances, press freedom could mean creating a public arena that is not tethered to Western foreign and geopolitics.

Let me give one final example: since March, when Saudi Arabia began bombing Yemen, more than 10,000 refugees – from Somalia and elsewhere – have crossed the border into Yemen. They risked their lives traversing the Gulf of Aden because traffickers led them to believe the war in Yemen was over. Can there be a more tragic example of what it means to be uninformed, to risk death through drowning to reach a place where huge numbers of other people are themselves on the run?

But we, the fortunate ones, the most well-informed, what do we know? The Yemen conflict is now being described as the "forgotten war", and this is misleading. It is tolerated – timidly, silently, looking the other way – because it is being waged by an ally of the West. So far, 4,000 have been killed, 20,000 wounded, 9,000 of those seriously. One in every two people is starving; there is no water; a naval blockade is preventing any humanitarian aid from getting through, residential areas are being bombarded. Human Rights Watch is describing these acts as war crimes.

Imagine the outcry if all this had been committed by IS!

Some 800,000 refugees have been taken in by families in Yemen, people who are themselves starving. A document released by the United Nations says: "The Yemenis are demonstrating huge resilience and solidarity." We should at least be aware of that, now above all.

Home
Print
Newsletter
More on this topic
Interview with journalist Chris Woods on drone warfare: "It's not risk-free war, it's displaced war" Drone war in Afghanistan and Pakistan: Living in the shadow of the "angels of death"Qantara.de dossier: Yemen conflictMedia in Egypt: Fall into line or switch off
Related Topics
Abdul Fattah al-Sisi, Drones / drone warfare, Freedom of the press, Iranian nuclear programme, Islam and the West, Media in Germany, Media in Iran, Refugees, Yemen conflict
All Topics

In Doha, Arabs from Morocco, Tunisia, Egypt and Algeria are gathering to celebrate the first ever FIFA World Cup to be held on Arab soil. The criticism from Europe? Over the top, ... END_OF_DOCUMENT_TOKEN_TO_BE_REPLACED

November 2022 sees the Arab world firmly in the spotlight with the COP27 in Egypt and the FIFA World Cup in Qatar. Public trust in MENA governments is weak, thanks to their ... END_OF_DOCUMENT_TOKEN_TO_BE_REPLACED

Palme d’Or winner "Boy from Heaven" is a classic crossover film in which cultural elements are mixed together in haphazard and random fashion. Shady Lewis Botros bemoans the ... END_OF_DOCUMENT_TOKEN_TO_BE_REPLACED

COP27 in Sharm el-Sheikh is turning into a PR disaster for Egypt’s military regime. Instead of praise for the host, the news is full of solidarity for imprisoned activist Alaa ... END_OF_DOCUMENT_TOKEN_TO_BE_REPLACED

END_OF_DOCUMENT_TOKEN_TO_BE_REPLACED
Social media
and networks
Subscribe to our
newsletter