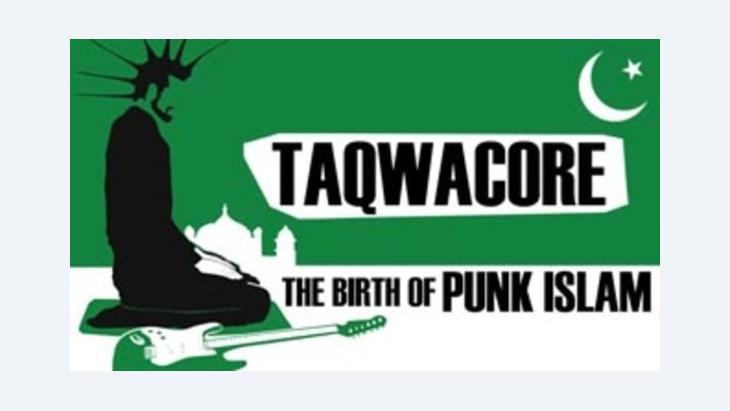 Every movement has its pioneers. With his novel "Taqwacore", Michael Muhammad Knight created a blueprint for an individual youth protest culture in the US: "Muslim Punk". His book is both shocking and provocative. But "Taqwacore" has struck a chord with Muslim youngsters who say it reflects their own conflicts of identity. By Naima El Moussaoui

A flatshare in Buffalo, New York, where the "Muslim Punks" gather for prayers every Friday afternoon. A hole in the wall, made with a baseball bat, indicates the direction of Mecca. Prayer mats are rolled out alongside empty beer bottles and pizza boxes. Anyone can have a shot at being the imam: sometimes it's Rabeya the feminist – a woman who wears a burka covered in various punk band sew-on patches and who only prays when she feels like it.

At other times Jehangir leads the prayers – a permanently drunk guy with a Mohican, leather jacket and an electric guitar slung around his neck. As soon as the sun goes down, it's time for sex, punk rock and partying in this particular house.

​​In the novel, a Taqwacore community is established with numerous Muslim punk bands. "There was a boy in Texas who thought it was all real. He wanted me to introduce him to the people in the book," says Knight, describing an encounter with one reader. "I told him I'd made it all up. That there's no such thing as Taqwacore. And he said: But I'm Taqwacore and I always was." The boy then went on to form a Muslim punk band, naming it after one of the bands in the novel: "Vote Hezbollah".

"Not all Muslims are the same, and there are many complexities within the Islamic world," explains Knight. Today, he says, he has found his "peace in humility towards Allah". As a devout Muslim, scholar of Islam and writer, he continues to engage with the subject of American Islam.

The heroes of his novel "Taqwacore" transgress boundaries that also present themselves to Muslims in real life. Not all of them fit into the classic scheme and practice their faith – just as in the case of other religions. Some Muslims don't pray or fast, others drink alcohol, party to excess, have extramarital sex, are homosexual, and perhaps eat salami on the sly.

With this in mind, "Taqwacore" also means having the courage to lead an existence as a failed but uncompromisingly honest Muslim. Without a mask that maintains false pretences. Without double standards and self-deception. Without fear of being true to oneself. In this regard, the first-person narrator has wise advice for all Muslims: "If you don't pray, then don't behave as though you do. You don't need to get a complex and think you're worse than all the most devoutly faithful in the world. Be a Muslim on your own terms. And tell the world it can go to hell!"

Home
Print
Newsletter
More on this topic
Interview with Michael Muhammad Knight: ''Religious Laws Can Change''Punks and Sharia Law in Indonesia: The Mohawk Crusade''Taqwacore: The Birth of Punk Islam'': As Rebellious As It Gets
Related Topics
Islam and the West, Islam in Europe, Islamic art, Islamic lifestyle, Koran | Quran, Muslims in the West
All Topics

Recent efforts to rehabilitate Assad are setting a damaging precedent for accountability, just as the international community is expressing the need to hold Russia to account for ... END_OF_DOCUMENT_TOKEN_TO_BE_REPLACED

Nouara may be 65, but she is ready to join thousands of others who burn their ID and pay traffickers for the chance of a new life in Europe. Zineb Bettayeb reports END_OF_DOCUMENT_TOKEN_TO_BE_REPLACED

Education for girls and women is still possible in Afghanistan, says Reinhard Eroes of the Kinderhilfe Afghanistan initiative. In interview with Elisa Rheinheimer, he talks about ... END_OF_DOCUMENT_TOKEN_TO_BE_REPLACED

Locals in the Middle East have said European critics are showing bias and hypocrisy when they condemn Qatar. Observers agree that Qatar has had to deal with more criticism than ... END_OF_DOCUMENT_TOKEN_TO_BE_REPLACED

In Doha, Arabs from Morocco, Tunisia, Egypt and Algeria are gathering to celebrate the first ever FIFA World Cup to be held on Arab soil. The criticism from Europe? Over the top, ... END_OF_DOCUMENT_TOKEN_TO_BE_REPLACED

Comments for this article: Provocation as a Way of Life

I am not at all surprised to learn about this creed. It simply reflects the stark contradictions between western values & Islam. The muslim youngsters living in the west cannot be expected to observe Islamic ways of life in an environment which is overwhelmingly hostile to the basic values of Islam. So they must be excused for whatever distorttions & abnormalities of behavior, conduct, or mental attitudes they display. It can be reasonably hoped that these yougsters will ultimately come to identify the follies of their thinking & behavior after a while when they get matured in life.

END_OF_DOCUMENT_TOKEN_TO_BE_REPLACED
Social media
and networks
Subscribe to our
newsletter