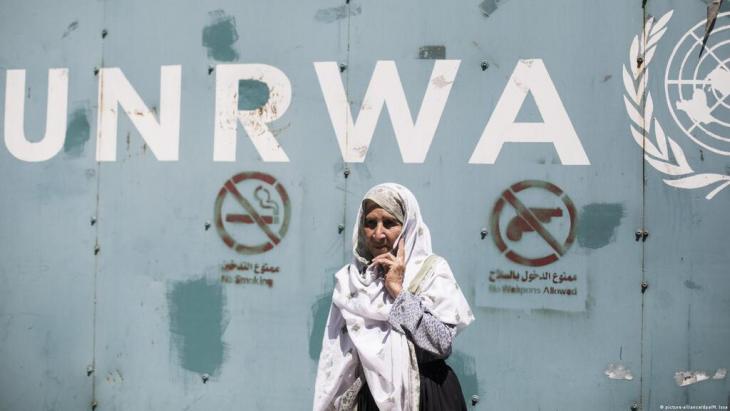 Middle East conflict
"Palestinian refugees have a right to the truth"

The UN Relief and Works Agency for Palestine Refugees (UNRWA) wants to make public several million documents it has collected on those displaced in 1948 and their descendants. The project is intended to help deal with trauma. But funds are lacking, says Dorothee Klaus of UNRWA in an interview with Jannis Hagmann

Ms Klaus, you would like to set up an online archive of historical documents dating from the years after the establishment of the State of Israel and the "Nakba" (the catastrophe), as the Palestinians call it. What exactly are your plans?

Dorothee Klaus: We are firmly convinced that refugees have a right to truth and information. All refugees should have the opportunity to access historical files on their families. The online archive will provide direct access to historical refugee files and all personal documents on registered population groups that UNRWA has stored. The intention is that it will also include a public interface that provides an overview of the origins and the number of people expelled from Palestine in 1948 and their migration paths.

What kind of documents are we talking about here?

Klaus: Documents that were created as part of a census in 1950 and 1951, directly after UNRWA began its work. They include family files with handwritten assessments of each family's situation and information about the composition of the family and its social and economic status in Palestine before 1948. At the time, UNRWA's primary task was to provide for the displaced population. It was about establishing who was entitled to food rations, accommodation and so on.

UNRWA also inherited lists from aid organisations such as the Red Cross or the Quakers (AFSC) The objective of the 1950/51 census was to verify who really was a displaced person. At the time, UNRWA staff visited every family, re-registered names and relationships and noted information on the family's social and economic situation before the displacement.

Where is all this information now?

Klaus: The UNRWA documents from the census are in our offices in Damascus, Amman, Gaza City, Beirut and Jerusalem. Attempts have already been made to digitise all refugee files. Some 30 million documents have been digitised, but about 10 million documents were omitted. They still have to be scanned and entered in our database. What's more, the historical files have yet to be indexed and classified. 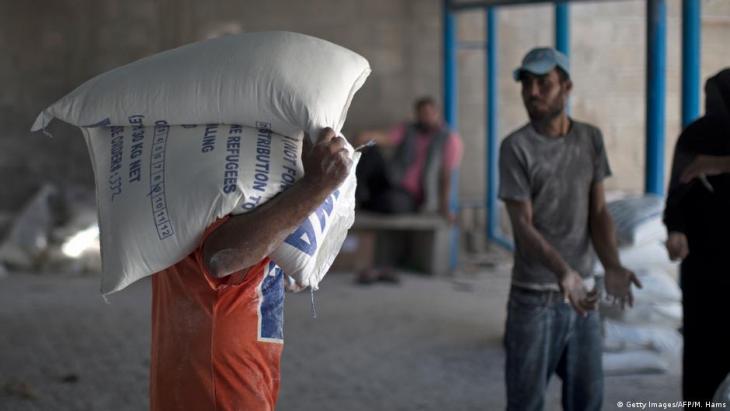 Food and education for Palestinians: the UN Relief and Works Agency for Palestine Refugees is repeatedly criticised for keeping the Middle East conflict alive by de facto inheriting refugee status. "I'd like to point out that large sections of the public don't seem to be aware that the unresolved issue of Palestinian refugees is fostering what is criticised as being a 'policy of suffering'," says Dorothee Klaus. "These people continue to live without internationally recognised citizenship, without internationally recognised travel documents and without full respect for their human rights while they are being promised the 'right of return and compensation'"

"All figures will be based on historical documents"

Apart from refugees' right to information about their respective families, which you mentioned at the outset, why is there a need for an online archive?

Klaus: Firstly, because of the prevailing political climate: the question of Palestine's refugees is currently being pushed aside. This makes it all the more important that UNRWA secures the documents now in an appropriate manner. Efforts are also being made to have UNRWA dissolved. This push is based on the assumption that the refugee problem would be solved if UNRWA no longer existed, which would not of course be the case.

Secondly, we hope that a publicly accessible archive would contribute to a better understanding of an event that played a decisive role in shaping the Middle East as we know it today. It will help broaden awareness of the situation of the descendants of those who were displaced in 1948, who to this day are waiting for a just and durable solution to the Middle East conflict.

What makes our documents valuable is that they are the basis for the Palestinian refugee status, which is linked to rights that have been denied the refugees. Whoever is registered with us or is descended from a male who was displaced at that time has the status of a refugee today. This is why it is important to both preserve these documents and to create entire family trees. Moreover, we also assume that discussions at political level about a just and sustainable solution for Palestinian refugees will invariably draw on UNRWA data.

UNRWA is accused of keeping the Middle East conflict alive by passing the refugee status on from one generation to another. Is your project not helping to prolong the conflict instead of searching for solutions?

Klaus: Depending on who is speaking, UNRWA is accused of either exaggerating refugee numbers or lowering them. Our intention is that the origin and number of people displaced in 1948, their migration paths and their descendants will be established and made transparent within the framework of the archive project. The figures will be based on historical documents that can be checked. As far as the criticism is concerned, I can say this: for decades, UNRWA made no attempt to open up the historical archives, as a result this step is making some Palestinian parties and refugees uneasy. 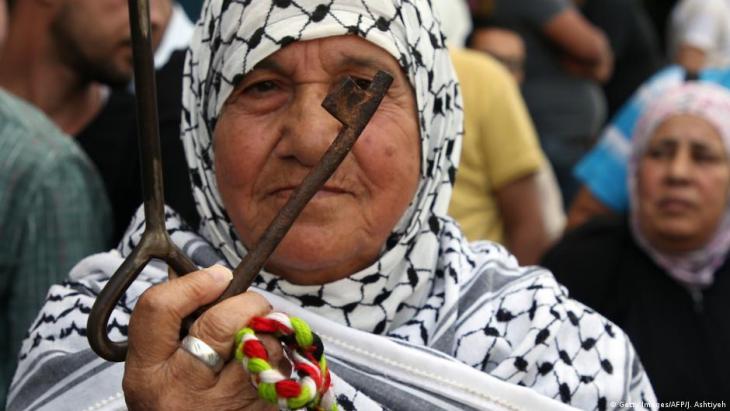 At a protest against the Nakba (expulsion), a Palestinian woman shows the keys of her abandoned house as a sign of her hope to return: "We assume that the displacement in 1948 had a very traumatic impact on the first generation," says Dorothee Klaus from the UN Refugee Agency for Palestine UNRWA. "Suffering was not talked about. This in turn had an impact on the way children were dealt with. There was not much space for emotions. A better understanding of the past and the linking of the past and the present allows people to look to the future with clarity"

"Why now?" they are asking. "What for?" That's the criticism from one side. As far as criticism from the other side is concerned, I'd like to point out that large sections of the public don't seem to be aware that the unresolved issue of Palestinian refugees is fostering what is criticised as being a "policy of suffering". These people continue to live without internationally recognised citizenship, without internationally recognised travel documents and without full respect for their human rights, while being promised the right of return and compensation.

"The displacement in 1948 had a very traumatic impact"

How will an online archive change the situation Palestinian refugees currently find themselves in?

Klaus: Access to the archive will allow them to better understand their family's history and to deal with what is sometimes unrecognised trauma that is handed down from one generation to the next – both at collective and individual level. We assume that the displacement in 1948 had a very traumatic impact on the first generation. Suffering was not talked about. This in turn had an impact on the way children were dealt with. There was not much space for emotions. A better understanding of the past and the linking of the past and the present allows people to look to the future with clarity.

That is psychology. What evidence have you seen of this?

Klaus: We know from psychological research that trauma that is not dealt with is carried down through the generations and may have a negative impact on the present. We noticed that people were suffering from this kind of trauma from the reactions of those refugees who were given access to documents. No matter how old they were, they all burst into tears. Every one of them. So much comes to the surface. It is as if they are suddenly shaken out of the rigor of shock. Very little consideration is given to the fact that this event had such an impact on the self-image and behaviour of several generations and shaped these things so considerably. People should be given the opportunity to work through this, both at an individual and a collective level.

In other words, you have already given people access to documents?

Klaus: As part of a pilot project. A small team of 15 young Palestine refugees in Beirut is working to complete family trees and to put together the documents relating to the displaced people and their descendants for one village. The idea is that we prepare documents and discuss them with groups of refugees. This would mean that emotions could be expressed in a supportive environment. However, we have not yet received the funding we need to continue to project on a large scale and within an appropriate timeframe.

Do you have psychologists in your team?

Klaus: We work with local institutions, with the American University and the St Joseph University of Beirut, for example. We are taking it slowly, one step at a time.

How large would this project be and how much time and money are needed?

Klaus: At the moment, we assume that it would take about five years to get a complete overview of the family trees of all registered Palestinian refugees and to set up a public information portal. We need a much larger team and about US$ 20 million over ten years.

Dr Dorothee Klaus (53) is director of the Department of Relief and Social Services at the United Nations Relief and Works Agency for Palestine Refugees in the Near East (UNRWA), which is active in Gaza, the West Bank, Lebanon, Syria and Jordan. She is based in the Jordanian capital, Amman. She holds an MA in Philosophy and Ethnology, an MA in Humanitarian Assistance and a PhD in Geography.

It is possible to write about the Holocaust and the crimes of colonial powers without downplaying anything. In her latest book, Charlotte Wiedemann focuses on the numerous blind ... END_OF_DOCUMENT_TOKEN_TO_BE_REPLACED

The Palestinian militant organisation Hamas, with Hezbollah's help, is building up a military presence in Lebanon, the ultimate consequences of which could be devastating, writes ... END_OF_DOCUMENT_TOKEN_TO_BE_REPLACED

With his fist bump greeting for a man he previously called a pariah, US President Biden has paved the way for Saudi Crown Prince Mohammed bin Salman's return to the international ... END_OF_DOCUMENT_TOKEN_TO_BE_REPLACED

Asked about the Shoah, Palestinians often bring up the Nakba, the displacement of Palestinians associated with the founding of the state of Israel. An Israeli Holocaust researcher ... END_OF_DOCUMENT_TOKEN_TO_BE_REPLACED

Foresight is needed to turn the tide of German policy. Being independent of Russia must not lead to dependence on authoritarian regimes in the Middle East. By Kristin Helberg END_OF_DOCUMENT_TOKEN_TO_BE_REPLACED

For many years, world-famous conductor Zubin Mehta has worked tirelessly to strengthen relations between Arabs and Jews, sponsoring projects such as "Road to Recovery", which is ... END_OF_DOCUMENT_TOKEN_TO_BE_REPLACED
Author:
Jannis Hagmann
Date:
Mail:
Send via mail

END_OF_DOCUMENT_TOKEN_TO_BE_REPLACED
Social media
and networks
Subscribe to our
newsletter