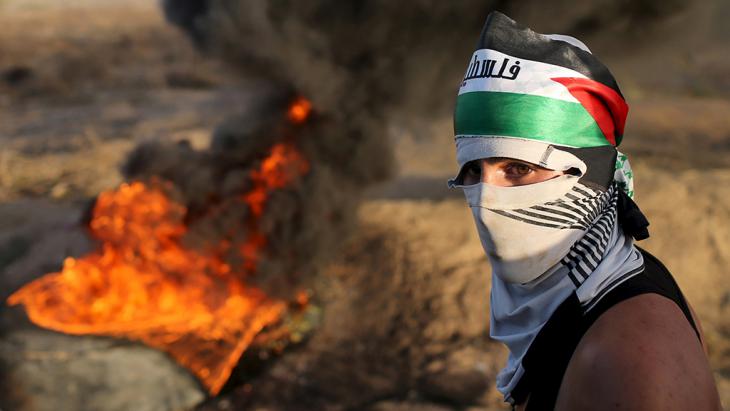 2015 closed in a wave of violence. Israel has continued consolidating its control of the West Bank and forged ahead with settlement building. Radical Palestinians have reacted to the increased repression with knife attacks. Details from Tel Aviv by Daniella Cheslow

"Every day I see Israel expanding its relations with the international community and – what is more important – we are seeing more and more contacts with the Arab world," Israeli government spokesman Mark Regev admitted. "Israel received some 20 percent this year of all global investments in cyber security."

"I am not at all at ease," said Diana Buttu, a Ramallah-based analyst and former legal advisor to the Palestinian Liberation Organisation. "Our younger generation is fed up. They don't see prospects for the future, or that anything is going to change in the next generation."

Peace talks collapsed last year. In the shadow of the peace process stalemate, violence has erupted. Since mid-September Palestinians have killed 20 Israelis in stabbings, shootings and vehicular attacks, while Israelis have killed at least 129 Palestinians, including 81 said by Israel to be assailants. Israel blames Palestinian leaders for incitement to violence; Palestinians say the attacks stem from despair of achieving independence from Israeli military rule.

Israeli rule in the West Bank has become more entrenched in the last year. In March, the ruling Likud party trounced the opposition in national elections, garnering 30 seats in Israel's parliament. Prime Minister Benjamin Netanyahu, now in his fourth term, swore in a hard-line coalition of settlement supporters and ultra-Orthodox parties. His government has continued building settlements. In mid-December, the Jerusalem municipality approved 891 new housing units in Gilo, a Jewish neighbourhood in east Jerusalem. 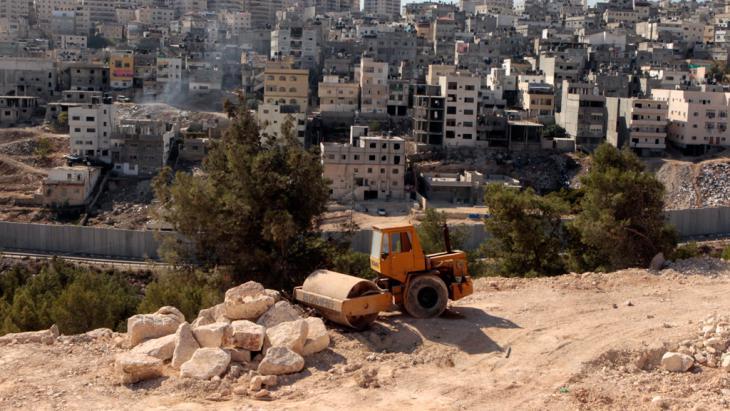 Settlement building in controversial areas: according to a report by the organisation "Peace Now", Israel is working on reviving plans to build apartments in a particularly sensitive location in the West Bank. The government is planning the construction of more than 55,000 units, some of which are to be built in two new settlements, the organisation reported, citing official plans as its source. 8,300 apartments are to soon to be erected in Zone East One (E1)

Miri Maoz Ovadia, a spokesman for the umbrella settler group Yesha Council, says the settlement project is thriving. This year 600,000 settlers were resident in the West Bank and east Jerusalem, areas Israel captured from Jordan in 1967 and which Palestinians eye for a future state.

"Not only do we have a large growth rate, but we also have higher average births per family," said Maoz-Ovadia. "The Israelis have been living here for generations. These numbers are irreversible."

″It will take a miracle″

Among Palestinians, the sense of frustration with Israeli rule is matched by infuriation with their own leadership. Palestinian Authority president Mahmoud Abbas has stayed in office despite his term expiring in 2009, Buttu said. Rather than cultivate a successor, Abbas, 81, has ousted rivals, cracked down on dissidents and all but ensured a chaotic transition after he leaves office or passes away, she said. A poll released this month by the Palestinian Centre for Policy and Survey Research found that 65 percent of Palestinians believe the leader should resign.

Political scientist Mukhaimer Abusaada of the Gaza Strip's Al-Azhar University said 2015 was actually a good year – but only by comparison with others. There were no wars, he noted, which was a reprieve after the damaging 50-day battle between Israel and Hamas in summer 2014. And Abusaada, 51, managed to leave Gaza twice for travel to Europe – a rarity for most residents of the area.

On the larger scale, Abusaada said the violent Hamas takeover of Gaza in 2007, which led to a rupture between the Islamist party and the more moderate West Bank-based Fatah, has exacerbated the enclave's problems. Egypt will only open its border with Gaza if Palestinian Authority security personnel guard the crossing, which is unimaginable unless the two factions reconcile, Abusaada said. Israel will not lift its blockade of Gaza while Hamas is in power, he added. The result is an impoverished, isolated enclave where the largely young population is mired in 43 percent unemployment, according to a May World Bank report.

"It will take a miracle to see something good in Gaza in 2016," Abusaada said. "Something will have to come from God." 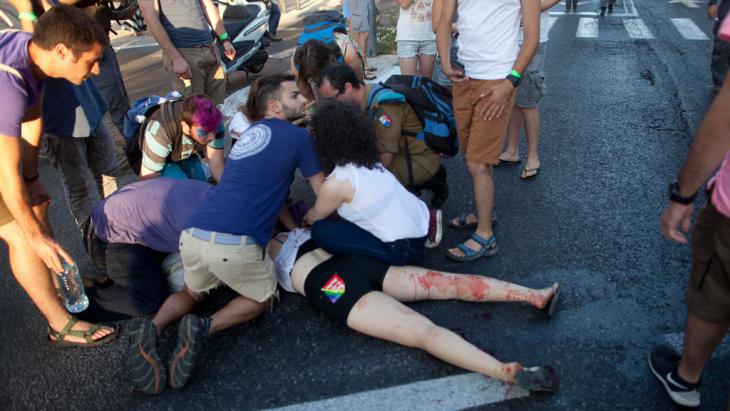 Hate and violence: during Jerusalem′s Gay Pride parade at the end of July, religious fanatic Yishai Schlissel stabbed 16-year-old Shira Banki. She died of her injuries a few days later. The 39-year-old assailant also injured several other parade participants. The ultra-orthodox Jew is on trial for murder and grievous bodily harm. He had already attacked the Gay Pride parade in Jerusalem in 2005, injuring three people with a knife

Among liberal Israelis, the deadlocked peace process is a source of grave concern. In early December, US Secretary of State John Kerry sparked uproar in Israel with his comment that Israel, through its prolonged rule of the West Bank, will become "a bi-national state."

"We do see a rise of the Israeli underground," Schneider said. "We see extremists on both sides that control us."

Prime Minister Benjamin Netanyahu has sworn there will be no bi-national state. Spokesman Regev said the Palestinians are to blame for the stalemate in negotiations. The Palestinians say they will not negotiate a peace process while Israel continues to build settlements.

Out of sight, out of mind

Both Israelis and Palestinians agreed that international involvement had little impact on the reality in the Holy Land.

With the Syrian civil war grinding on into its fifth year and Europe contending with more than a million migrants and the threat of "Islamic State", the Israeli-Palestinian issue appears to have lost its position as a focal point of foreign policy.

In November, the European Union set guidelines to label products from Israeli settlements. Maoz-Ovadia of the Yesha Council said the move was "populist" and estimated the ultimate effect on Israeli West Bank businesses would be irrelevant.

Buttu, in Ramallah, pointed to the coming US elections, which would guarantee a "pathetic" approach on the part of the Americans to the Israeli-Palestinian conflict.

"In terms of this current intifada, I think we're going to see it continue in the same low-grade scale, where Palestinians are the majority being killed," Buttu said. "And it's going to allow Netanyahu to do what he wants."

In Nathan Englander's novel "kaddish.com", a Jewish man is plagued by feelings of guilt and regret for disregarding the rules of the Kaddish (prayer for the dead) for his deceased ... END_OF_DOCUMENT_TOKEN_TO_BE_REPLACED

Russia is leaving no stone unturned in its attempts to make the Islamic Republic an ally in the war against Ukraine. Fortunately for Vladimir Putin, the mullahs in Tehran are ... END_OF_DOCUMENT_TOKEN_TO_BE_REPLACED

It is possible to write about the Holocaust and the crimes of colonial powers without downplaying anything. In her latest book, Charlotte Wiedemann focuses on the numerous blind ... END_OF_DOCUMENT_TOKEN_TO_BE_REPLACED

The Palestinian militant organisation Hamas, with Hezbollah's help, is building up a military presence in Lebanon, the ultimate consequences of which could be devastating, writes ... END_OF_DOCUMENT_TOKEN_TO_BE_REPLACED

With his fist bump greeting for a man he previously called a pariah, US President Biden has paved the way for Saudi Crown Prince Mohammed bin Salman's return to the international ... END_OF_DOCUMENT_TOKEN_TO_BE_REPLACED

Asked about the Shoah, Palestinians often bring up the Nakba, the displacement of Palestinians associated with the founding of the state of Israel. An Israeli Holocaust researcher ... END_OF_DOCUMENT_TOKEN_TO_BE_REPLACED
Author:
Daniella Cheslow
Date:
Mail:
Send via mail

END_OF_DOCUMENT_TOKEN_TO_BE_REPLACED
Social media
and networks
Subscribe to our
newsletter