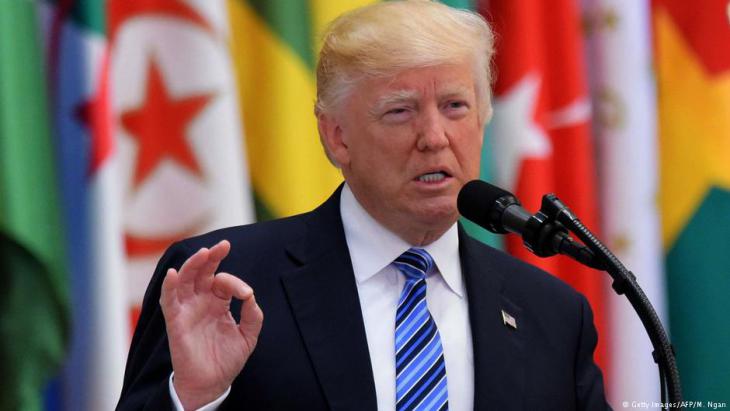 Fond of boasting about his deal-making capabilities, U.S. president Donald Trump has oozed confidence in the run-up to his visit to Israel and the Occupied Territories. Whether he will prove a mediating or an alienating influence remains to be seen. By Ylenia Gostoli

″We will get it done, ″ said U.S. president Donald Trump of a peace deal with Israel during Palestinian president Mahmoud Abbas' recent visit to Washington. With his businessman's optimism, Trump appeared to reassure the Palestinian leader he is willing to work with both sides to resume peace talks, which last collapsed in 2014.

Trump will visit Israel and the Occupied Territories this week – the president will be in Jerusalem on 22 May and in Bethlehem on 23 May – but expectations that the visit will clarify the new American administration's approach to the Israeli-Palestinian conflict are low. A series of contradictory statements since Trump took office have left Palestinians and Israelis alike wondering just what kind of deal the President would put on the table.

A senior White House official told the press that Trump has no plans to bring Israeli Prime Minister Benjamin Netanyahu and Palestinian President Mahmoud Abbas together in a trilateral meeting for the time being.

″It’s just too soon, ″ the official told Israeli newspaper Haaretz, adding that the U.S. president would lay out ″confidence-building measures″ intended to create the right atmosphere for renewing peace talks. The official suggested these might include asking Israel to put a break on settlement construction and take steps to allow the Palestinian economy to improve; and ending to all ″incitement and violence″ on the Palestinian side.

But so far the only consistent feature of Trump's approach to the Israeli-Palestinian issue has been its unpredictability. During Netanyahu's visit to the White House earlier this year, Trump suggested he might do away with decades of American policy by abandoning the idea of a two-state solution: ″I am looking at two-state and one-state, and I like the one that both parties like,″ Trump said. His seemingly casual statement was in fact in line with his campaign language, which omitted any reference to the two-state solution. 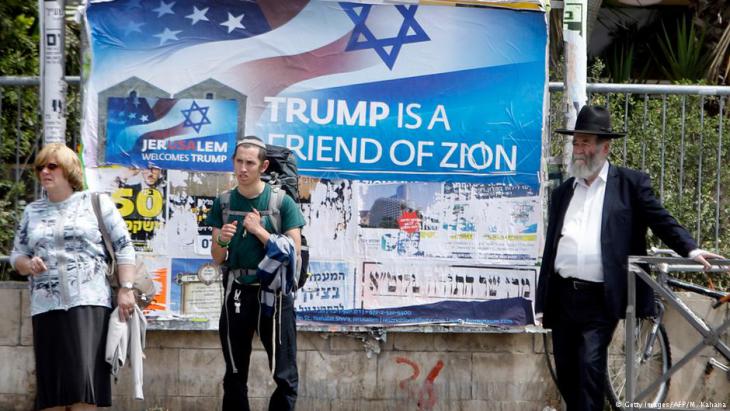 There can be no compromise: ″Contrary to Netanyahu's plan of one state and two systems, apartheid, the only alternative to two sovereign and democratic states on the 1967 border is one single secular and democratic state with equal rights for everyone, Christians, Muslims, and Jews, on all of historic Palestine,″ stated secretary general of the Palestine Liberation Organisation and Palestinian chief negotiator Saeb Erekat

To the dismay of Israel's increasingly influential extreme right camp, including the pro-settler Jewish Home party headed by Education Minister Naftali Bennet, the President also asked Netanyahu to ″hold back on settlements for a little bit.″ Since Trump came to power, Bennet has been increasingly vocal about the annexation of Area C, the 60 percent of the West Bank that was designated by the Oslo interim Accords as being under full Israeli control. His party even drafted a law proposal to annex Ma'ale Adumim, one of the West Bank's largest settlements.

Earlier this year, the Israeli Knesset passed a law to legalise ″wildcat″ settlement outposts built on private Palestinian land in West Bank, and considered illegal not only by the international community (which considers all settlements illegal and an obstacle to peace, as reiterated by a UN security council resolution passed last December) but by the Israeli government as well. In the first few weeks of the Trump administration, Israel approved more than 6,000 new settlement homes. Meanwhile, home demolitions in Palestinian villages located in Area C, where settlements are also built, proceeded at an intensified pace.

Observers were alarmed by the appointment of David Friedman, a man whose fund raises about $2 million a year for the Beit El settlement, as U.S. ambassador to Israel. Palestinians were also worried about Trump's stated intention to move the U.S. embassy from Tel Aviv to Jerusalem, which would make the U.S. the first country to do so – a move Palestinians see as sanctioning Israel's unilateral annexation. The international community never recognised Israel's declaration of Jerusalem as its ″undivided capital″ in 1980 and Palestinians see East Jerusalem as the capital of a future Palestinian state. The Trump administration has since lowered the tones of its rhetoric on moving the embassy, but Bennet and those on the right of Netanyahu's coalition are pressuring the Israeli leader to take a clear stand.

″This is the most right-wing government we've ever had and any concession to the Palestinians has strong opposition within the government, ″ Shlomo Brom, a senior research associate at the Institute for National Security Studies in Tel Aviv told Qantara.de. While he believes the American administration is sending ″signals″ it will not abandon the idea of a two-state solution, he adds that ″there is always the question, what state do you mean by that. Netanyahu also says he supports the two-state solution, however his two-state solution is not a solution of two equal and sovereign states.″

Last February, Netanyahu had talked about a state with limited sovereignty for Palestinians. ″What I’m willing to give the Palestinians,″ the Israeli prime minister said in a cabinet meeting last February, ″is not exactly a state with full authority, rather a state-minus.″Palestinian leaders rejected this position. ″

"Contrary to Netanyahu's plan of one state and two systems, apartheid, the only alternative to two sovereign and democratic states on the 1967 border is one single secular and democratic state with equal rights for everyone, Christians, Muslims, and Jews, on all of historic Palestine,″ stated secretary general of the Palestine Liberation Organisation and Palestinian chief negotiator Saeb Erekat.

With more than 1,000 Palestinian prisoners on hunger strike in Israeli jails for more than a month, Palestinians have called for a general strike on Monday and for a ″day of rage″ on Tuesday, to coincide with Trump's visit, first called by the Palestinian national committee set up in support of the strike.

A poll conducted last December suggested Palestinians had little confidence in the new U.S. president as an overwhelming majority (77%) believed he is ″pro-Israel″ and that he will not contribute to a more successful peace process.

Speaking at the Arab-Islamic-American Summit in Riyadh on Sunday during his first speech on foreign soil, Trump reiterated that peace between Israelis and Palestinians is possible. However, given the lack of a clear strategy on the Middle East, reservations remain about what kind of peace might be in store.

″All existing indicators show that the Trump administration will engage in a 'process' to reach a 'deal',″ Alaa Tartir, programme director of Al-Shabaka, a Palestinian think tank, told Qantara.de. ″Reaching a deal does not mean reaching peace, as the basic prerequisites for genuine and lasting peace are unattainable at the moment. At best, it will be an 'economic peace' and a mere security arrangement that sustains the destructive status quo (…) A dishonest broker for peace can’t bring honest peace.″

Asmaa al-Atawna's debut novel "Missing Picture" has been published in German translation (Keine Luft zum Atmen – Mein Weg in die Freiheit). In it, she describes life in Gaza from ... END_OF_DOCUMENT_TOKEN_TO_BE_REPLACED

At the end of every year, the team at Qantara.de gives you a run-down of the ten most-read articles on the site over the past 12 months. Here is a quick overview of the stories ... END_OF_DOCUMENT_TOKEN_TO_BE_REPLACED

Palestinian Christians are an integral part of the Palestinian national movement. This is the conclusion reached by the Chilean-born Palestinian political scientist Xavier Abu Eid ... END_OF_DOCUMENT_TOKEN_TO_BE_REPLACED

Jesus – Issa in Arabic – doesn’t merely enjoy the highest place among the prophets in the Koran. He is also revered in Islam’s mystical tradition for his message of love and mercy ... END_OF_DOCUMENT_TOKEN_TO_BE_REPLACED

With reported hostilities against Israeli journalists and the flag of the Palestinian territories flying on the streets and in the stadiums, it is clear the World Cup in Qatar is ... END_OF_DOCUMENT_TOKEN_TO_BE_REPLACED
Author:
Ylenia Gostoli
Date:
Mail:
Send via mail

END_OF_DOCUMENT_TOKEN_TO_BE_REPLACED
Social media
and networks
Subscribe to our
newsletter