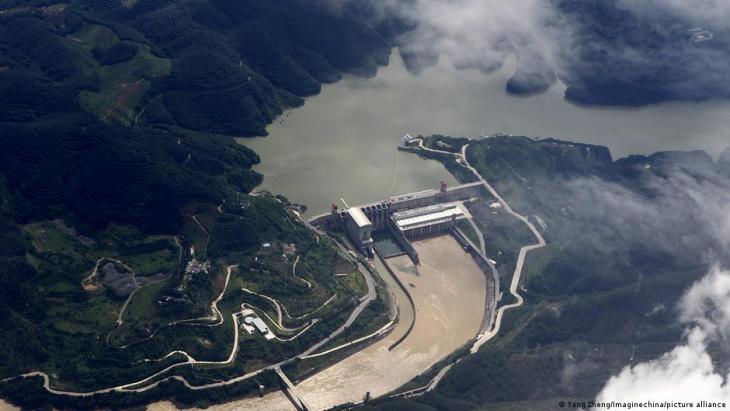 From the Euphrates to the Mekong, dams that ensure one country's water supply risk leaving others parched. But shared water resources can be a source of peace as well as conflict. By Ruby Russell

Early on in Russia's invasion of Ukraine, Moscow announced it had bombed a dam on the North Crimean Canal. After Russia annexed Crimea in 2014, Ukraine erected the dam, blocking a vital water supply to the occupied territory and resulting in severe water shortages.

The war in Ukraine is not being fought over Crimea's water supply. But the Pacific Institute's Water Conflict Chronology details examples of water as a weapon, casuality or trigger of conflict going back millennia. Ashok Swain, professor of peace and conflict at Uppsala University in Sweden and former UNESCO chair for international water co-operation, says Crimea's water supply is another example of this.

Yet shared water resources can also be an opportunity for co-operation. Even in Crimea, had the international community engaged Russia and Ukraine on how to solve the humanitarian issue of water, it might have "given them a possibility or a forum to negotiate, to discuss how to address this issue, and also solve other issues," says Ashok.

Some 40% of the global population lives on rivers that cross international borders. And with the climate crisis leaving more regions suffering from drought, how to share these essential resources equitably has raised high-profile tensions around the world.

In February, the Grand Ethiopian Renaissance Dam was finally switched on, despite ongoing objections from Egypt and Sudan, who have long feared the dam's impact on their farmlands further down the Nile. 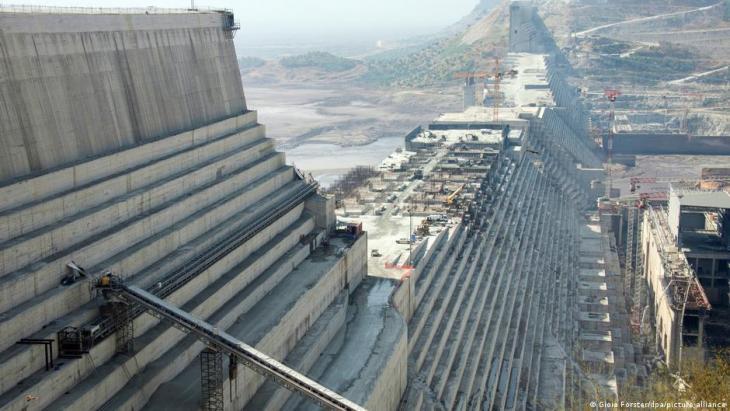 In February 2022, Ethiopia announced the commissioning of the Renaissance Dam despite ongoing fierce objections by its two downstream neighbours, Egypt and Sudan. Both have expressed concern about the impact of the Ethiopian dam on their share of the Nile's water, which is the region's main water source

Dams springing up along the Mekong River in China, meanwhile, have been blamed for drought in Thailand and Cambodia. And tensions between rivals India and Pakistan have been rising over their shared waters in the Indus River basin.

The Water Peace and Security online tool, built by partners including IHE Delft in the Netherlands and the World Resources Institute, shows a map of our planet peppered with tensions over water that threaten to turn violent. Yet, Scott Moore, author of "Subnational Hydropolitics: Conflict, Co-operation, and Institution-Building in Shared River Basins", says such unrest mainly happens within countries, rather than between them.

International tensions over water, Moore says, rarely escalate into full-blown conflict. And when disputes do flare, water is often a proxy for other issues.

"The intuition is that it's water that's the cause of tension and conflict, whereas I would say it's typically the reverse – where geopolitical tensions or economic disputes become translated into water," Moore says.

In the case of dams going up on the Mekong, for example, complex factors resulting in low water levels in downstream countries can be downplayed in the face of China's massive campaign on dam-building upstream. "There is increased anxiety among neighbouring countries about the consequences of China's growing power, and I think we see that reflected in water issues," Moore said.

Politics and drought in the Middle East

Water shortages in Iran have fuelled protests, dubbed the "Uprising of the Thirsty", since last summer. At the same time, tensions have flared in long-standing disputes with neighbouring Afghanistan over its Kamal Khan Dam upstream on the Helmand River. 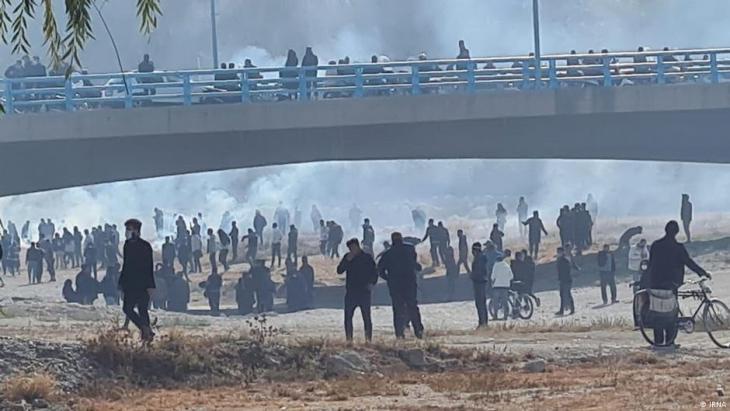 Since last summer, water shortages in Iran have fuelled protests, dubbed the "Uprising of the Thirsty". At the same time, tensions have flared in long-standing disputes with neighbouring Afghanistan over its Kamal Khan Dam upstream on the Helmand river

"Whenever Iran is facing strong domestic water crises, which would include protests by farmers or conflicts between urban citizens and farmers," Schmeier explains, "you also see at the same time, strong statements of Iranian policymakers towards Afghanistan saying, we want our fair share of the river."

And while Iran accuses its upstream neighbour of hoarding water, it is also building dams of its own – on the Helmand and other rivers, including a tributary of the Tigris that flows on into Iraq, which has water scarcity problems of its own.

Drought-stricken Iraq blames both Iran and Turkey for its water woes. Turkey has dams on both the Tigris and the Euphrates, and downstream, both Iraq and Syria say these dams are leaving them dry.

When it was built in the 1980s, Turkey agreed to release 500 cubic meters per second of Euphrates waters through the Ataturk hydropower dam to neighbouring Syria. Turkey is blaming climate change for the flow now falling well short of this. But Syrian Kurds across the border believe Turkey is punishing them as political rivals.

Swain says tensions over Ethiopia's GERD hydropower are also rooted in a tangle of geopolitical and climatic factors. The dam could, in theory, be mutually beneficial: downstream countries Egypt and Sudan could make use of its cheap electricity. At the same time, the dam could be used to regulate the Nile's flow to avoid the kind of flooding that has devastated areas of Sudan in recent years.

The question, however, is what might happen if a few successive dry years mean Ethiopia holds back water to keep its reservoir sufficiently full. "So that's why this kind of fear is coming in – it's climate change," Swain says.

Water as a "depoliticised" issue

International co-operation over Nile waters might be easier if upstream and downstream countries didn't fall on different sides of the geopolitical divide. "The world has divided into two camps... Ethiopia is getting support from China and Russia," Swain said, while Egypt and Sudan are more closely aligned with the West. 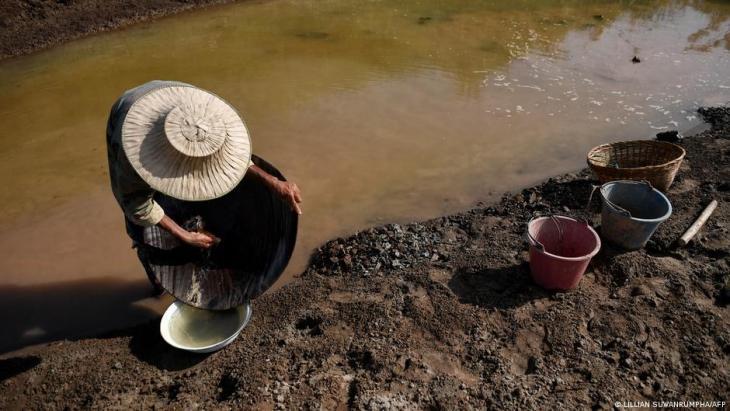 Water a mirror for other issues: China's massive upstream dam-building campaign makes it easy to downplay complex, homegrown factors resulting in low water levels in downstream countries. "There is increased anxiety among neighbouring countries about the consequences of China's growing power, and I think we see that reflected in water issues," says author of 'Subnational Hydropolitics', Scott Moore

Yet Mehmet Altingoz, who researches transboundary management at the U.S. University of Delaware believes focusing on the humanitarian issue of Crimea's water supply could have helped diffuse tensions along precisely this global divide.

"NATO and the West missed an opportunity to ease tensions in the region by urging Ukraine to find a way to cooperate on providing water access to Crimea," argues an article he recently co-authored.

"It's easier to cooperate over environmental assets," he admitted. His own research has covered Turkey and Armenia, countries that have no diplomatic relations but share ownership of a Soviet-era dam that sits on their dividing border.

Every month, Altingoz explains, a technical committee comprising members of the rival nations meets to decide how water will be allocated: "There is extensive co-operation over this water body, and we realised it is improving relations locally."

Water for co-operation, not conflict

According to the UN, close to 300 international water treaties have been signed since 1948 and the vast majority rarely make headlines.

"There are far more instances and examples and cases of co-operation over water – especially if we define that in terms of international agreements dealing with the management of shared water resources – than there are instances or cases or examples of conflict," Moore said.

She also points to the stability pact that worked to build peace in the Balkans following war in the 1990s, taking the shared waters of the Danube as a starting point for co-operation.

"They negotiated an agreement, set up a river basin organisation and that brought the countries together and then that spilled over into also trade, into cleaning up remnants of war and all sorts of other things," Schmeier said.

The Ukraine war is changing the global geopolitical landscape. Ali Khamenei, Iran's most powerful man, is already cosying up to Russia in anticipation of a harsh post-war reality ... END_OF_DOCUMENT_TOKEN_TO_BE_REPLACED

Many Turks are dissatisfied with the international status of their country. At the same time, opinion polls reveal great scepticism among the Turkish population towards the USA. ... END_OF_DOCUMENT_TOKEN_TO_BE_REPLACED

Turkey is turning towards the Turkic nations of Central Asia, intensifying its economic, diplomatic and military relationships with these countries. So what is driving Turkey’s ... END_OF_DOCUMENT_TOKEN_TO_BE_REPLACED

Turkish-Armenian rapprochement kicked off in Moscow in January, after a break of 13 years. This time, focusing on relatively easy fixes such as trade and transportation, both ... END_OF_DOCUMENT_TOKEN_TO_BE_REPLACED

Russia is seeking to shore up the government of Kazakhstan and is sending in the military. For President Putin, there is more at stake than simply his influence in a partner ... END_OF_DOCUMENT_TOKEN_TO_BE_REPLACED

The balance of power on Europe's eastern borders is shifting. Georgian historian Beka Kobakhidze speaks from Tbilisi about rivalry and emerging alliances in the region, an ... END_OF_DOCUMENT_TOKEN_TO_BE_REPLACED
Author:
Ruby Russell
Date:
Mail:
Send via mail

END_OF_DOCUMENT_TOKEN_TO_BE_REPLACED
Social media
and networks
Subscribe to our
newsletter