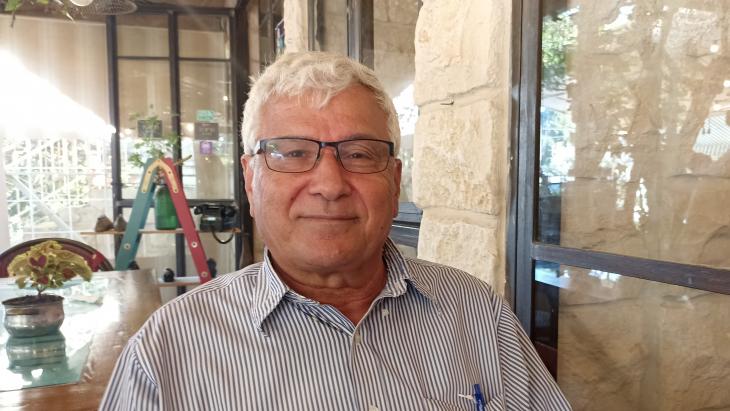 May 2021 saw a deadly flare-up in Israel-Hamas hostilities, with eruptions of extreme violence in several of Israel's 'mixed' cities. Two weeks later, a broad-spectrum governing coalition – the first to include an independent Arab Israeli party – was formed. Noam Yatsiv reflects on this year's rollercoaster of events with Thabet Abu-Rass, co-director of NGO Abraham Initiatives

Events last May unfolded at a dizzying rate, with police seeming perplexed and disoriented. Ferocious youths took to the streets at night in search of an unlucky Jewish or Arab passerby. The sudden, ruthless violence blurred the inequity between Israel's Jewish majority and its disadvantaged Arab minority. In several parts of the country, members of both groups were suddenly terrified to walk outside in the evening. In some neighbourhoods, residents were scared to leave their shutters up at night.

Today, an evening stroll through any of the flashpoints – Bat Yam, Acre, Haifa, Lod, Jaffa – reveals nothing of what took place there last May. Debris has been swept away, businesses re-opened, houses repaired.

Mr Abu-Rass, do you see social media as a factor in the shifting dynamics?

Thabet Abu-Rass: Certainly. Arabs consume far less Israeli mass media than they used to. They find it untrustworthy, one-sided, and they are seeking alternatives on social media. Some of it is fake, most of it isn't – but it's clearly a very powerful tool.

Abu-Rass: Lod, for instance, is not Haifa; it doesn't celebrate diversity. The mayor of Lod's public policy clearly favours Jews. Garin members arrive in places like that with an ideological agenda, which fuels the erasure of Arabs from the public sphere. This specific tension isn't felt in my hometown of Qalansawe, or in Nazareth. And by the way, it isn't the case with all 120 Garins. In Nof Hagalil [a mixed city in northern Israel], for example, they operate very differently. I feel it is no coincidence that the city was spared of any violence last May. In Lod, Ramle and Jaffa, Garin groups are active in restricting Palestinian political and cultural life. 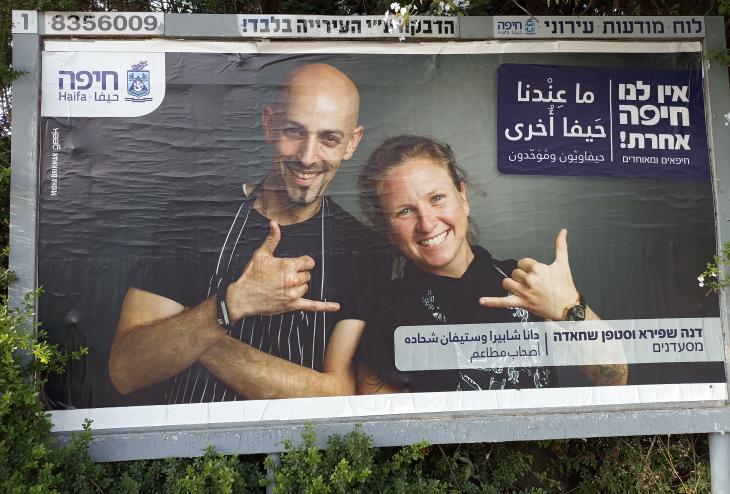 Things are slowly changing, as this example of Israeli-Arab solidarity in Haifa shows: "Private-sector campaigns indicate there are powerful forces in Israeli society that are healthy – it's not all far-right and settlers," comments Abu-Rass. "There are still many people who want a different future for Israel, and realise that if this house burns down, it will do so on all of us"

Do you see a generational schism in Israel's Palestinian society?

Abu-Rass: This new generation of Palestinians has internalised Israeli "chutzpah". It knows how to bang on the table and make demands. In this sense, it is more "Israeli" than ever, but collectively it remains Palestinian. It is constantly excluded from the hegemonic ethos – even an individual who has "made it" and is a successful doctor. Today's youngsters are far more assertive than their parents were, and they'll claim their rights. They want equal representation, not only in healthcare, but everywhere without exception. The political legitimisation of Arab political representation over the past two years is very significant.

My generation was born following the Nakba, seeking nothing but stable ground. My son's generation has demands and won't shut up. Mine focused on studying and quietly building institutions to advance Arab society in Israel, his asks questions, and does so loudly. It argues openly with Jewish society, because it comes into more contact with it than ever before. They ask: "What the hell is a Jewish and democratic state? Where are we in this picture?"

I see the change in my own family. My son likes going to karaoke bars with Jewish friends from boarding school. My idea of a night out is a nice dinner in Nablus with my wife. My father did neither of these – he simply made a living to raise his children.

During May's events, several municipalities and organisations (including yours) launched campaigns calling for shared living and moderation. Simultaneously, dozens of Israel's largest corporations and unions launched several billboard and TV campaign in the same vein. What do you make of this unprecedented move on behalf of big corporations? What's in it for them?

Abu-Rass: These private-sector campaigns indicate there are powerful forces in Israeli society that are healthy – it's not all far-right and settlers. There are still many people who want a different future for Israel, and realise that if this house burns down, it will do so on all of us. But beyond that, the financial sector has a clear interest here. Twenty one percent of Israelis are Arab and 12% are Haredi [ultraorthodox Jews]. Combined, that's a third of all Israelis who contribute only about 17% of the national GDP. As we speak, 48% of all first-graders are either Arab or Haredi. The financial sector is several steps ahead of the political arena in realising that its future depends on a huge growth in professionals from these communities. 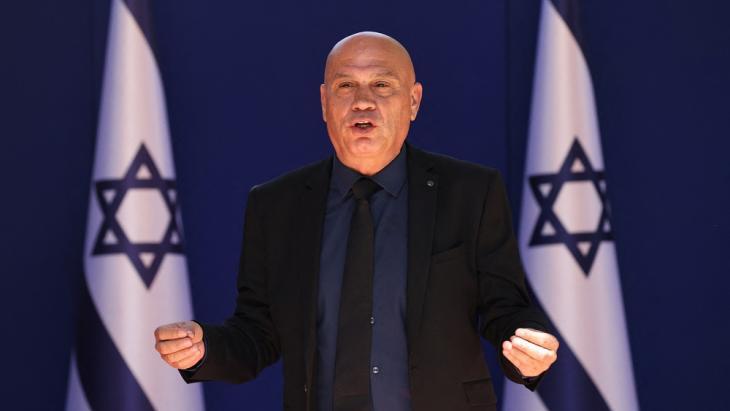 More 'Israeli' than ever, but collectively Palestinian: they may have 'chutzpah', but this new generation of Arab Israelis is still excluded from the hegemonic ethos – even those who have 'made it' professionally. Yet, As Abu-Rass point out, "today's youngsters are far more assertive than their parents were, and they'll claim their rights. They want equal representation, not only in healthcare, but everywhere without exception. The political legitimisation of Arab political representation over the past two years is very significant"

Do you think the COVID-19 crisis has fostered pent-up anger among young people?

Abu-Rass: On the contrary. I think it has softened people and fostered a sense of civil solidarity. I think things would have been worse in May had it not been for COVID. I took part in the October 2000 events [protests and rioting following the onset of the Second Intifada, in which 12 Israeli Arabs were killed by police], and I can tell you it was much wider in scale. This time events were indeed extreme, but they were isolated to approximately 20 places in Israel, and only involved young, male hooligans. I do see a certain silver lining in the fact that [apart from one unclear incident] May's events didn't involve fatalities caused by police fire.

You said that most young Arabs are both more Israeli and more Palestinian than ever before. How do you think this will affect Israeli society, ten years from now?

Abu-Rass: It is inevitably leading to a normalisation of this double identity, in which the Palestinian element comes first. 2018's Nation State law eroded the prospect of a non-Jewish "Israeli identity" for the time being. But that doesn't mean things aren't changing. Due to governmental incentives, the number of Arab students increased by 122% over the last decade. I'm glad that our higher education is a national priority, but why shouldn't adequate housing also be? Arabs are more present than ever before in hi-tech positions, governmental offices and so on, which means that a large middle class is quickly evolving. But it won't remain in crowded, poor towns, and is moving to predominantly Jewish towns. So we'll surely have more "mixed cities" in the near future. That has positive potential, but it will also lead to tensions, when residents begin demanding services such as Arabic-language schools or mosques. The key to deeper change lies in the advancement of housing plans, industrial zones in Arab cities, and, in the bigger picture, independence for our people in the occupied territories.

Yigal Yehoshua, a Jewish citizen attacked in Lod, and Muhamad Kiwan, an Arab citizen shot in Umm Al-Fahm, both succumbed to their wounds in the hospital. Their families donated their organs – Yigal's saved the life of a Palestinian woman and Muhamad's saved five Jews and an Arab. Hopefully, such noble acts will be remembered by Israeli society, no less than last May's fear and bloodshed.

The Abraham Initiatives NGO strives to fulfill the promise of full and equal citizenship and complete equality of social and political rights for Israel’s Jewish and Arab citizens, as embodied in Israel's Declaration of Independence.

Asmaa al-Atawna's debut novel "Missing Picture" has been published in German translation (Keine Luft zum Atmen – Mein Weg in die Freiheit). In it, she describes life in Gaza from ... END_OF_DOCUMENT_TOKEN_TO_BE_REPLACED

At the end of every year, the team at Qantara.de gives you a run-down of the ten most-read articles on the site over the past 12 months. Here is a quick overview of the stories ... END_OF_DOCUMENT_TOKEN_TO_BE_REPLACED

Palestinian Christians are an integral part of the Palestinian national movement. This is the conclusion reached by the Chilean-born Palestinian political scientist Xavier Abu Eid ... END_OF_DOCUMENT_TOKEN_TO_BE_REPLACED

Jesus – Issa in Arabic – doesn’t merely enjoy the highest place among the prophets in the Koran. He is also revered in Islam’s mystical tradition for his message of love and mercy ... END_OF_DOCUMENT_TOKEN_TO_BE_REPLACED

With reported hostilities against Israeli journalists and the flag of the Palestinian territories flying on the streets and in the stadiums, it is clear the World Cup in Qatar is ... END_OF_DOCUMENT_TOKEN_TO_BE_REPLACED
Author:
Noam Yatsiv
Date:
Mail:
Send via mail

END_OF_DOCUMENT_TOKEN_TO_BE_REPLACED
Social media
and networks
Subscribe to our
newsletter