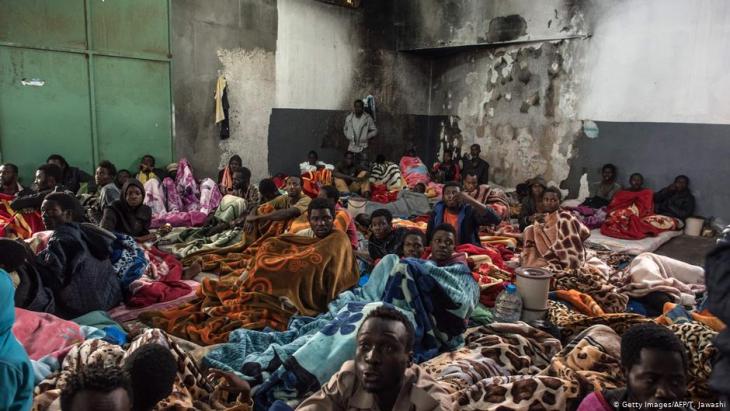 Facing the risk of exploitation, violence and torture, aid groups warn Libya is not a safe country for refugees. They argue that is reason enough for the EU not to send asylum-seekers back to the country. By Jeannette Cwienk

According to the UN refugee agency UNHCR and the International Organisation for Migration (IOM), there are about 50,000 registered refugees and asylum-seekers in Libya, along with some 800,000 migrants. According to the UN definition, a refugee is a person who has fled violence or persecution, while migrants are those seeking a better life abroad.

No one knows exactly how many people are being held in illegal camps in Libya, which is currently overrun by violence and chaos. Hyun-Ho Cha, spokesperson for Amnesty International in Berlin, said that the country's civil war has left its infrastructure crippled. Cha said this means there is hardly a difference between state-run or illegal camps.

Armed militias often run the so-called state camps and government authorities have very little effective control. He believes there is virtually no capacity for Libya to punish violations of human rights, since the public prosecutor's office is in no position to carry out investigations due to the unrest.

What is known about the Libyan refugee camps?

"Sometimes they are literally packed in on top of one another, in appalling hygienic conditions and accessing water is very difficult – sometimes there is no drinking water at all," said Benjamin Gaudin from French aid organisation Premiere Urgence Internationale. According to Julien Raickmann, the head of Doctors Without Borders in Libya, people in the camps continue to die from hunger and disease and the situation is "catastrophic."

“People described to me being tortured by electric shock, of being beaten with guns and sticks, and burned with melted plastic. They described how they still feel pain from their wounds and scars sustained during their time in Libya” – Luca, @MSF_Sea Doctor onboard #OceanViking pic.twitter.com/kwzBvl7H8r

You may also like: Libya – failed state par excellence

Amnesty has reported instances of torture, serious violence and exploitation – including through sexual means – and forced labour. Amnesty also documented cases of people being murdered while trying to escape. Primarily, however, militias and traffickers are using refugees to make money by threatening them with violence or death – in some cases by making torture videos to send to their families.

According to Amnesty, the already calamitous conditions in Libyan camps has worsened since the outbreak of fighting in early April; those detained were caught between the warring fronts and were left without food for days. On 3 July, more than 50 refugees and migrants were killed during an airstrike on the Tajoura prison camp in Tripoli.

Repatriation of refugees to Libya under fire

Aid organisations say the agreement reached between European Union states and Libya's coastguard to prevent people reaching Europe by boat has contributed to the dire situation of refugees in Libyan camps.  After the EU rescue mission boat "Sophia" was suspended until further notice due to disagreements over who should receive those on board, Libyan coast guard vessels are increasingly being used to intercept migrant vessels – allegedly to put a stop to people smugglers. 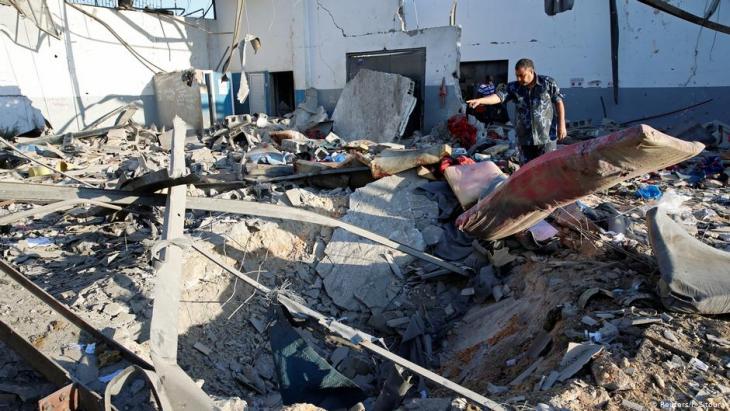 Targeting refugees: in early July, more than 50 interned migrants were killed in an air raid on the Tajoura camp in eastern Libya. The UN directors demand that 5,600 refugees and migrants currently in Libyan centres "be properly liberated and protected or evacuated to other countries". From there, "accelerated resettlement would be necessary". To this end, the countries would have to create more evacuation and resettlement sites

According to UN figures, more than 2,300 people have been apprehended at sea and returned to camps in Libya since January 2019. The increased use of the Libyan coast guard has also led people to choose more dangerous routes with a higher risk of drowning, said Amnesty. According to the IOM, at least 682 migrants have died crossing the Mediterranean Sea to Europe since the beginning of the year – 426 of those departed from Libya.

Given the devastating conditions in the war-torn country, the Council of Europe in June called on the EU to cease co-operation with the Libyan coastguard. The head of the UNHCR, Filippo Grandi and IOM Director General Antonio Vitorino backed the demand.

#MSF calls, once again, for the immediate closure of #Tajoura detention centre and the evacuation of all detained refugees and migrants out of Libya. The forced return of people fleeing #Libya must stop, the cycle must be broken.https://t.co/4pbu3rWhHR

In their appeal, the organisations demanded that the refugees and migrants detained in Libya must be liberated and brought to safety. They also said Europeans should resume their suspended search and rescue operations in the Mediterranean and take migrants to safe havens, the availability of voluntary and safe repatriation should also be ensured.

The organisations added that more reception places under international supervision are urgently needed for those stranded in Libya, and that people should be registered and allowed to live in safe UNHCR centres. The UNHCR already maintains such a centre in Libya. It was initially set up for refugees who were to be taken from the camps and flown to other countries.

What is the EU's position?

According to a spokesperson for the German Foreign Ministry, Berlin is in discussion with the UNHCR as to whether and how new accommodation options can be created in Libya. However, the spokesperson noted that the situation was being considered "without any illusion" about the violations of human rights, adding: "At the moment, I cannot imagine any scenario in which repatriation to Libya would be in compliance with human rights." Foreign Minister Heiko Maas launched a German initiative at the end of July for the distribution of rescued refugees.

The European Commission has rejected the aid organisations' repatriation criticism, claiming that since 2014 around €338 million has been collected for programmes related to migrants in Libya. European Commission spokeswoman Natasha Bertaud said that there was "great concern about the deterioration of the situation on the ground," but that the Commission was unable to act because individual EU members could not agree on a common approach.

Italy, in particular, has called attention to the fact the agreement with Libya has significantly reduced the number of refugees arriving on its shores; Mediterranean crossings have drastically reduced since July 2017. For about a year, the Italian government has not allowed rescue boats into its ports and is quick to point out that the number of deaths in the first half of 2019 is significantly lower than in the first half of 2018.

Despite coast guard patrols, the trip for those trying to reach Europe has become much riskier: The death rate is now 5.2% – last year it was 3.2%. Moreover, since the decrease in rescue operations, many incidents and fatalities go unrecorded, meaning that the true figures remain unknown.

The devaluation of the Egyptian pound combined with rising food prices is taking its toll on Egypt. More and more people are slipping into poverty. Karim El-Gawhary reports from ... END_OF_DOCUMENT_TOKEN_TO_BE_REPLACED

Since returning to power in Afghanistan, the Taliban have steadily eroded the rights and opportunities of women and girls, particularly their access to education. But Afghans are ... END_OF_DOCUMENT_TOKEN_TO_BE_REPLACED

The book "The Invention of the Maghreb: between Africa and the Middle East" prompts us to review basic terminology. This includes terms that we use almost every day as if they are ... END_OF_DOCUMENT_TOKEN_TO_BE_REPLACED

Tunisia has been going through a severe economic and political crisis in recent years. More than one in three young people there are unemployed. For many skilled, qualified and ... END_OF_DOCUMENT_TOKEN_TO_BE_REPLACED

At the end of every year, the team at Qantara.de gives you a run-down of the ten most-read articles on the site over the past 12 months. Here is a quick overview of the stories ... END_OF_DOCUMENT_TOKEN_TO_BE_REPLACED

The government in the Netherlands, one of the last European nations to abolish slavery, has made an historic apology. But some feel that there is still a long way to go. By Ella ... END_OF_DOCUMENT_TOKEN_TO_BE_REPLACED
Author:
Jeannette Cwienk
Date:
Mail:
Send via mail

END_OF_DOCUMENT_TOKEN_TO_BE_REPLACED
Social media
and networks
Subscribe to our
newsletter