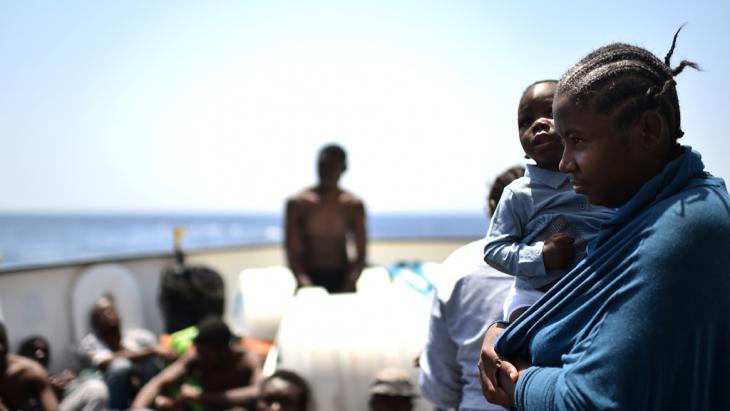 The EU claims that the migration pact with Africa is a completely new initiative. Rather than reshaping patterns of migration, however, Europe′s desperate politics of symbolism would merely seem to focus on stemming the flow. By Ludger Schadomsky

So now they're adopting a carrot-and-stick approach, or as the EU Commission formulated it rather more elegantly on Tuesday, "a mix of positive and negative incentives". The EU's foreign affairs and security policy representative, Federica Mogherini, even described the migration pact presented in Strasbourg as a "Copernican revolution" in the EU's refugee policy. It's also true that Copernicus' revolutionary ideas were only understood by others 200 years after his death.

This pact, which masquerades as a master plan, is in fact an admission that the EU's refugee policy so far has failed miserably, particularly where Africa is concerned. There's no lack of projects and plans, with illustrious names like Khartoum Process or Valletta Declaration, that are supposed to stem the flow of migrants. Unfortunately, they're not working in the slightest.

"Engagement" with Libya is to be "intensified"? Hasn't the Libyan foreign minister just declared that the country wouldn't take refugees back under any circumstances? And which of the many little Libyas in the failed state of the post-Gaddafi era are they talking about? No – it's not the Europeans who are wielding the stick, but the potentates in Africa, who are now unashamedly using the flow of refugees as a bargaining chip.

Africa is happy to let the migrants leave

Brussels has still not understood that its supposed "partners" in Africa have no interest whatsoever in stopping the migrants, the majority of whom are young men. Quite the opposite: In Eritrea, high-ranking members of the military are, according to reliable sources, earning good money trafficking people out of their own country.

Many in Somalia, as well as the extremely corrupt political class there, are only surviving thanks to money transfers home from the diaspora. Elsewhere, too, African rulers are only too happy to bid farewell to young unemployed people and potential troublemakers. 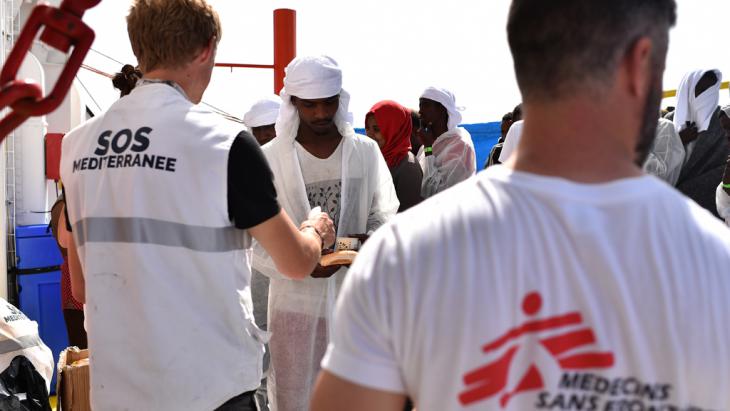 Bitter truth: "Europe's refugee policy is a policy of fending off refugees. It's an ill-fated and unworthy thing, poorly cobbled together and mercilessly laying bare the deep divides within the confederation of states," writes Schadomsky

Tuesday's supposedly Copernican idea from the migration technocrats – to strengthen economic development in the migrants' homelands and transit countries and give people prospects for a future there – is as old as development aid in Africa. And that has failed spectacularly.

For the EU to now threaten states with loss of trade if they are unwilling to cooperate is verging on the grotesque. After all, the EU's grossly unfair trade policies are part of the reason why hundreds of thousands of African farmers and fishermen have abandoned their homes and are trying to reach Europe.

Deprive the smugglers of business

Yet useful proposals are already on the table: EU asylum centres in North Africa and the Sahel are supposed to starve smugglers of business and prevent people from making the lethal journeys across the sea. Or the so-called "Blue Card" initiative for recruiting qualified personnel – albeit to only a limited extent, because it encourages a brain drain away from Africa.

But the bitter truth, stripped of idealism, is that Europe's refugee policy is a policy of fending off refugees. It's an ill-fated and unworthy thing, poorly cobbled together and mercilessly laying bare the deep divides within the confederation of states. So money is being thrown at the problem – and even that is not flowing as arranged. An emergency fund of 1.8 billion euros was agreed on at the end of 2015. So far, the 28 EU states have paid in just 80 million.

Tuesday's proclamation announced another eight billion euros by 2020 – but only the Commission knows where that money will come from. The great Copernicus must surely be turning in his grave at the EU's desperate politics of symbolism – and Federica Mogherini's misappropriation of his name.

It is possible to write about the Holocaust and the crimes of colonial powers without downplaying anything. In her latest book, Charlotte Wiedemann focuses on the numerous blind ... END_OF_DOCUMENT_TOKEN_TO_BE_REPLACED

For the first time since 1989, Algeria‘s authoritarian regime has sent a military parade marching through Algiers. A formidable show of strength designed to impress rival regional ... END_OF_DOCUMENT_TOKEN_TO_BE_REPLACED

Algeria‘s regime is again cracking down on anti-fracking activists and the unemployed in the country‘s south. Yet EU countries remain keen to scale up their energy cooperation ... END_OF_DOCUMENT_TOKEN_TO_BE_REPLACED

Algeria's decision to unilaterally sever diplomatic ties with Morocco in August 2021 – days after the presidency announced in a statement their relations would be reviewed – was ... END_OF_DOCUMENT_TOKEN_TO_BE_REPLACED
Author:
Ludger Schadomsky
Date:
Mail:
Send via mail

END_OF_DOCUMENT_TOKEN_TO_BE_REPLACED
Social media
and networks
Subscribe to our
newsletter