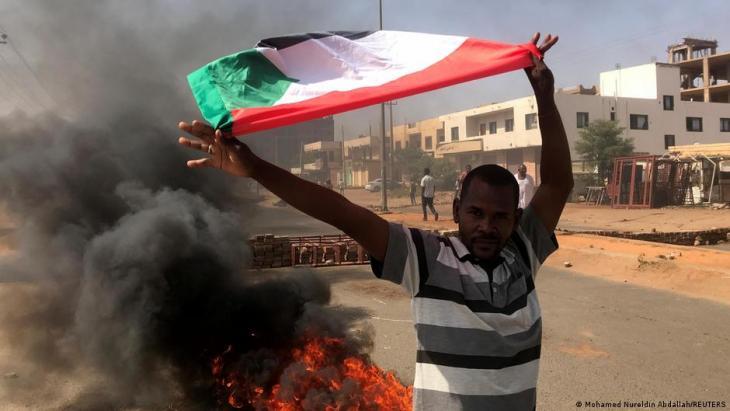 Military coup in Sudan
Is the Arab Spring about to die in Khartoum?

General Abdel Fattah Al-Burhan has declared a state of emergency in Sudan and dissolved the Sovereign Council, which was made up of military personnel and civilians. What will now happen in Khartoum is anyone's guess. The Sudanese experiment of peacefully wresting power from the military is facing its toughest test yet. An analysis by Karim El-Gawhary, reporting from Cairo

It's here – the big showdown that has been brewing for months between the civilian regime in Sudan and the co-governing military. There is no way to tell yet who will emerge triumphant from this episode of Sudanese history: those who executed the coup on behalf of military leader Abdel Fattah Al-Burhan or the pro-democracy movement that has mobilised peaceful resistance in the streets throughout the country.

On Monday morning, the whole thing still seemed a bit nebulous. Military forces were reported to have arrested a number of ministers and civilian politicians in Khartoum, including Prime Minister Abdalla Hamdok. At noon, however, came an official announcement. Al-Burhan declared a state of emergency and dissolved both the Sovereign Council of military and civilians, of which he is the head, and the cabinet. Disputes among politicians and their overweening ambition had forced him to save the nation, he declared, using the usual coup rhetoric in his recorded televised speech.

In parallel, the leaders of Sudan's democracy movement were busy mobilising the masses. Thousands of people made their way to military headquarters in central Khartoum, while demonstrations also broke out in many other parts of the country. The so-called Forces for Freedom and Change (FFC), a coalition of professional associations and pro-democracy groups, called on people to defend their revolution by engaging in peaceful civil disobedience.

The choreography of counterrevolution

A great deal is at stake here. The power-sharing agreement that the FFC exacted from the military after the fall of dictator Omar El-Bashir two years ago was unique in the Arab world. Under the agreement, the military was required for the first time to voluntarily hand over power to a civilian government. During a three-year transitional period, a sovereign council consisting of civilians and military officers and with powers similar to those of a president would set the course for the country, while a civilian government under Prime Minister Abdalla Hamdok would be responsible for day-to-day politics. 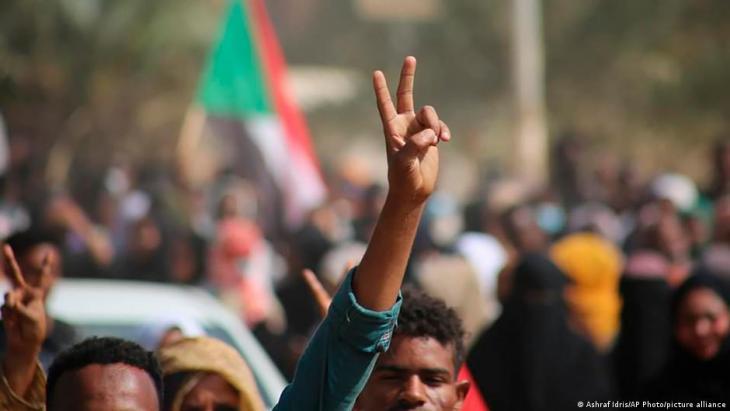 Even before the coup was officially announced on television on Monday midday, the pro-democracy movement had mobilised the masses and was taking to the streets. "The power struggle between the military and civilians is thus entering the next round in Sudan," writes Karim El-Gawhary. "The military of course has the weapons, but the protest movement has a political advantage. While the various factions have often been at odds with each other in their day-to-day operations, the coup has had the effect of helping them to close ranks"

This construct was supposed to last until the end of next year, after which the military would withdraw from politics once and for all and elections would be held.

But the men with the guns evidently had other plans. For months, they have been trying to sink the civilian government, which is struggling under the difficult economic situation in Sudan. There was already one failed coup attempt in September. Then, last week, supporters of renewed military rule launched a sit-in outside the presidential palace, a harbinger of things to come.

They demanded that total power be put back into the hands of the military. It was the choreography of counterrevolution we are already familiar with from the script in neighbouring Egypt, where former military head Abdul Fattah al-Sisi and his forces seized power in the midst of the chaos following the overthrow of dictator Hosni Mubarak.

International resistance to the coup

Those behind the coup in Khartoum can probably count on support not only from neighbouring Egypt but also from the autocratic Gulf States, because the Sudanese experiment in democratic transition has been a thorn in their side from the outset. They view the experiment as a threat to their own grip on power. Nevertheless, their support is likely to be largely covert.

In contrast, open international resistance to the coup is forming. "The arrest of civilian government officials and other political leaders – including Prime Minister Hamdok – undermines the country's transition to democratic, civilian rule," reads the official statement by US Department of State spokesperson Ned Price. He goes on to demand, in no uncertain terms, that: "Military officials should immediately release and ensure the safety of all detained political actors" and "fully restore the civilian-led transitional government."

Price warned that Washington was prepared to take concrete action. "The United States is pausing assistance from the $700 million in emergency assistance appropriations of Economic Support Funds for Sudan. Those funds were intended to support the country's democratic transition," he announced.

Statement by HR/VP @JosepBorrellF on the current political situation in Sudan: "The EU condemns the detention of Prime Minister Abdalla Hamdok and other members of the civilian leadership by Sudan’s military forces."

EU chief diplomat Josep Borell likewise issued a statement, describing the action on the part of the Sudanese military as a betrayal of the revolution and the transition to democracy. He called on the military to avoid violence at all costs and to release the detained. Stephane Dujarric, a spokesperson for UN Secretary-General António Guterres, echoed the EU chief diplomat's words from New York. "The Secretary-General strongly condemns the ongoing military coup d’état in Khartoum and all actions that could jeopardize Sudan’s political transition and stability," he declared.

The greatest resistance to Sudan's military, however, is likely to come from the country's own pro-democracy protesters, who already demonstrated plenty of staying power when hammering out the transitional agreement after the overthrow of Omar El-Bashir. Even though half a dozen protesters were shot dead by security forces the first night, the demonstrators have refused to back down. A wave of strikes against the coup perpetrators has been announced, and some of the employees of Sudan's central bank stayed home on the second day of the coup. It is expected that staff at other state institutions will follow suit.

The power struggle between the military and civilians is thus entering the next round in Sudan. The military of course has the weapons, but the protest movement has a political advantage. While the various factions have often been at odds with each other in their day-to-day operations, the coup has had the effect of helping them to close ranks. And the more the protest movement puts up a resolute and unified front, the faster cracks could open up again within the military, which is not exactly a unified bloc either. What we can already say for sure is that the rich Arab Gulf States will try to use their money to shift the balance in the direction of a renewed full takeover by the military.

At the moment, however, everything else is still up in the air. The Sudanese experiment in peacefully wresting power from the military is on trial as never before. For those hoping for change in the wider Arab world, the stakes are high. Tunisia, the only democratic experiment to emerge from the Arab Spring, has been crumbling before their eyes for the last two months after President Kais Saied de facto abolished the separation of powers. And now Sudan, the second bearer of hope for change and democratisation in the Arab world, is in danger of being lost.

In Doha, Arabs from Morocco, Tunisia, Egypt and Algeria are gathering to celebrate the first ever FIFA World Cup to be held on Arab soil. The criticism from Europe? Over the top, ... END_OF_DOCUMENT_TOKEN_TO_BE_REPLACED

November 2022 sees the Arab world firmly in the spotlight with the COP27 in Egypt and the FIFA World Cup in Qatar. Public trust in MENA governments is weak, thanks to their ... END_OF_DOCUMENT_TOKEN_TO_BE_REPLACED

Palme d’Or winner "Boy from Heaven" is a classic crossover film in which cultural elements are mixed together in haphazard and random fashion. Shady Lewis Botros bemoans the ... END_OF_DOCUMENT_TOKEN_TO_BE_REPLACED

COP27 in Sharm el-Sheikh is turning into a PR disaster for Egypt’s military regime. Instead of praise for the host, the news is full of solidarity for imprisoned activist Alaa ... END_OF_DOCUMENT_TOKEN_TO_BE_REPLACED

END_OF_DOCUMENT_TOKEN_TO_BE_REPLACED
Social media
and networks
Subscribe to our
newsletter