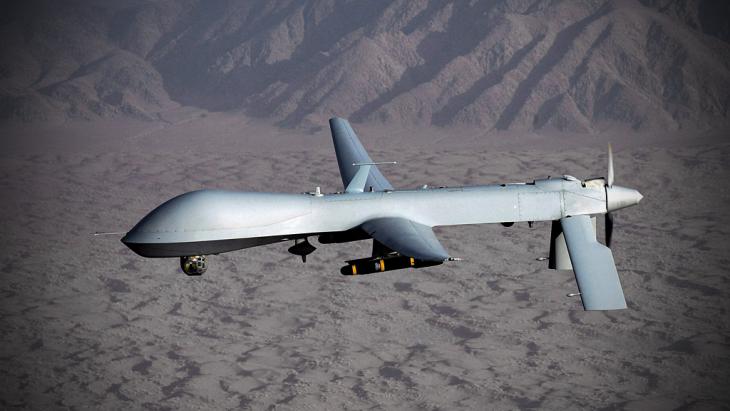 During the Obama era, the world witnessed what could be referred to as the 'dronification' of killing. Gone are combatant status, war goals and the option of negotiation. No prisoners are taken; people are just killed and anyone who happens to be in the wrong place at the wrong time just gets killed along with them. By Charlotte Wiedemann

The fact that the Obama era is being assessed above all on the basis of the elegance of the president can be seen as an indication of the advancing depoliticisation of news coverage. Now here was a man who knew how to make an entrance with nonchalant style!

But the president's elegance was not the only defining feature of his administration. We were reminded of this fact recently when at 4 o'clock one morning, dozens of civilians were eliminated by US fighter planes in the Afghan provinces of Kunduz. The inhabitants of the village were not killed in a war but during a so-called 'training mission' by the name of 'Resolute Support'.

Given the current situation, the question as to what kind of training can be provided by a massacre is purely rhetorical. Relatives of the victims demanded an independent investigation during a protest march in Kunduz. There won't be one.

What happened in the early morning light that day is unspectacular for us because it is preceded by a chain of similar events. It is virtually impossible to write a sentence like that without experiencing a chill down the spine. So, for our own sake too, we should take a moment at the end of a US presidency that began with the Nobel Peace Prize to reflect and try to answer a very straightforward question: what is the attitude of the US, NATO and the West towards killing? And what rights did the people who were killed have?

The world, as it is presented to us in the news, is currently full of crimes perpetrated by people who are not on our side: Putin, Aleppo ... It is never the done thing to talk about one's own side. Yet at the same time, we always know from the way things are said in public which our side is. So before we go any further, let this much be said: when a man runs up a tab in his local, his debt to the landlord seems less serious when more of his fellow regulars run up tabs too. The same cannot be said for human rights abuses: every human rights abuse must be considered on its own. No massacre can be offset against another. 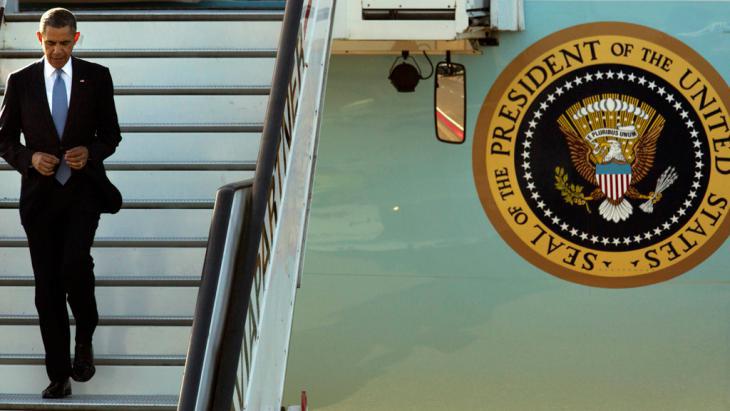 Extending the combat zone: US President Obama, for whom the idea of conventional warfare on the battlefield is horrific, has faced years of criticism regarding his policy of drone strikes – among other things owing to the high levels of civilian casualties and questionable legality of such operations. The strikes have impacted on US relations with countries such as Pakistan and Afghanistan. Just last June, Obama issued his troops in Afghanistan with new orders, including broad permission to conduct airborne attacks on Taliban fighters. US drones and jets currently fly almost daily missions in Afghanistan

During the Obama era, the world witnessed what could be referred to as the 'dronification' of killing. To begin with, 'dronification' refers to the actual instrument used to kill: under Obama, the number of drone missions increased tenfold compared to those under Bush. Every Tuesday, the Nobel Peace Prize winner personally signed a list of extrajudicial killings. In addition to those identified for 'targeted killing', many other people lost their lives in such killings. Well-informed critics speak of a ratio of 28:1, in other words, for every person assassinated in a targeted killing, 28 others were caught up in the arbitrary convoy of death. And because the US airbase Ramstein in Germany is a relay station in the drone war, these signals of death pass through the beautiful state of Rhineland-Palatinate.

But the term 'dronification' also refers to the framework within which such killings take place, even when – as was the case in Kunduz – other instruments were used. Those who kill in this manner do not put themselves at any risk; the lives of white soldiers are spared in drone warfare. Gone are combatant status, war goals and the option of negotiation. No prisoners are taken; people are just killed and anyone who happens to be in the wrong place at the wrong time just gets killed along with them. In many respects, Kunduz is a metaphor for this. So too is Germany's own Kunduz: the death of just under 100 civilians on September 2009 as a result of a command given by one German officer, Colonel Georg Klein. After all, the German Federal Court of Justice recently ruled that the relatives of the victims are not entitled to any damages.

No restitution for civilian victims

Anyone who loses his or her family as a result of a Bundeswehr mission outside Germany has no right to restitution. This same principle has been used repeatedly by the federal government to reject calls for compensation from victims of war crimes during the Nazi era: individuals have no right; only their states can demand something from our state.

Why then are they called 'human rights'?

In the past, civilian victims have been able to try and claim a violation of the European Convention on Human Rights. The British government wants to block this path by ensuring that the convention quite simply doesn't apply to British soldiers in combat. The 'War on Terror' in Iraq and Afghanistan resulted in 3,000 petitions filed by injured parties: considering the mass injustice committed in these countries, this is not a large number. However, in the words of former British PM David Cameron, it constitutes a 'witch-hunt' against British soldiers. 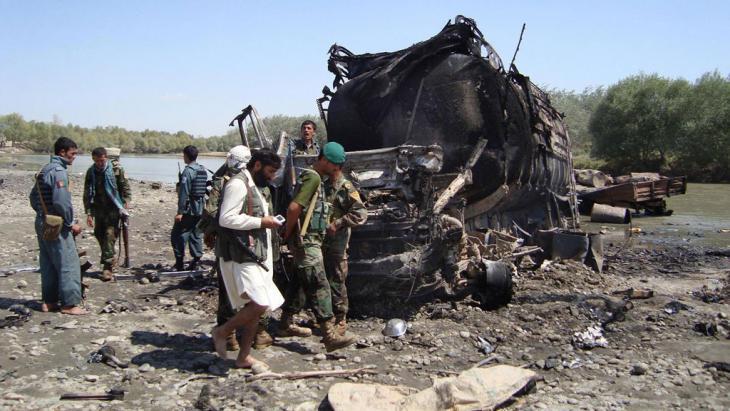 A terrible outcome: in September 2009, NATO jets were called in by the German armed forces to bomb two tankers hijacked by Taliban fighters. Some hundred people died, among them numerous civilians. In October the German Federal Supreme Court rejected claims for compensation submitted by victims of the airstrike. In its decision last Thursday, the Supreme Court confirmed its previous judgements. According to the statement released, ″having exhausted all the means for clarification at his disposal″, Colonel Georg Klein could not have known that civilians were located in the area targeted by the airstrike

The phrase 'asymmetric war' was once coined to describe conflicts where agile guerrilla groups and militia came up against conventional armies. Today the asymmetry in war is very different: civilians on one side, dronified warfare on the other.

In keeping with the current trend, this asymmetry could be described as a typical constellation of the post-truth age. From the air, we see for a moment the relatives of the victims screaming their pitiful demands into the sandstorm, but as soon as photos of dead babies crop up on the Internet, we are no longer sure whether it is real or a fake. There are too many dead children on the Internet these days. Post-truth victims.

In Yemen, no differentiation is made between schools, markets, hospitals and residential buildings. They are bombarded one and all. These are Saudi war crimes with American and British support. After all, according to the Saudis, the military advisors of these two countries are directly involved in the warfare. While the New York Times brought itself to refer to the United States as being 'complicit in this carnage', at least in the comments section, in Germany, the talk is of a 'forgotten war', a term altogether more suited to the arts section of a newspaper.

In the first half of this year alone, Germany has supplied armaments for this war to the tune of half a billion euros; the UK earns much more from these war crimes. Europe subsequently sends a fraction of the profits from armaments sales back to the region in the form of humanitarian aid and a population distracted by a post-truth will-o'-the-wisp wrings its hands and asks itself whether the West can really afford to be so generous.

The Bush era was characterised by open intervention and brash statements: anyone who was interested could see, hear and understand what was going on. The Obama era incited the illusory.

What will happen in this new era?

Home
Print
Newsletter
More on this topic
Interview with journalist Chris Woods on drone warfare: "It's not risk-free war, it's displaced war" Drone war in Afghanistan and Pakistan: Living in the shadow of the "angels of death"Interview with the Pakistani lawyer Mirza Shahzad Akbar: Fighting the injustice of the US drone programmeNoam Chomsky in interview: Obama's sangfroid
Related Topics
Arms trade, Barack Obama, Development aid, Drones / drone warfare, International terrorism, Islam and the West, NATO
All Topics

Very different Western reactions to the suffering in Ukraine and the Arab world show that there is a profound rift among cultures. Essay by Michael Young END_OF_DOCUMENT_TOKEN_TO_BE_REPLACED

The documentary "Nadia" tells the incredible story of Nadia Nadim, who was forced to flee from the Taliban as a child and became a football star. By Annabelle Steffes-Halmer END_OF_DOCUMENT_TOKEN_TO_BE_REPLACED

Three award-winning female directors appeal to the international film industry to save Afghan cinema. Supporting women filmmakers is more important than ever. By Christine Lehnen END_OF_DOCUMENT_TOKEN_TO_BE_REPLACED

Russia's ranking on the World Press Freedom Index has fallen again over the Kremlin's wartime censorship of the Ukraine conflict. From Myanmar to Mexico, journalists continue to ... END_OF_DOCUMENT_TOKEN_TO_BE_REPLACED

Ideally, those Europeans currently welcoming Ukrainian refugees would show the same sympathy to Syrians, Afghans and others fleeing war beyond the continent. But, argues Ian ... END_OF_DOCUMENT_TOKEN_TO_BE_REPLACED

END_OF_DOCUMENT_TOKEN_TO_BE_REPLACED
Social media
and networks
Subscribe to our
newsletter