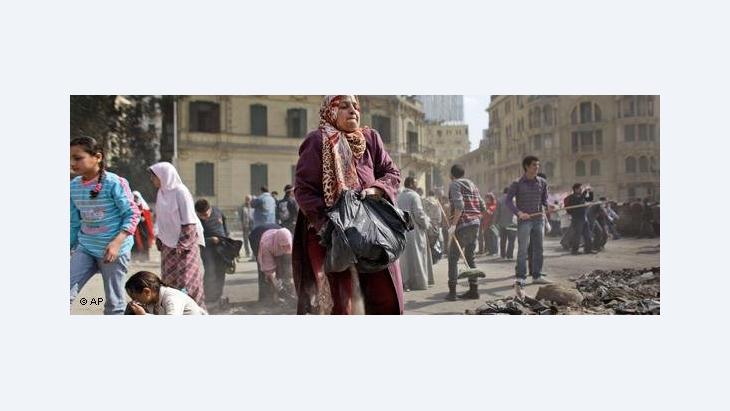 Great How They Keep Things Clean and Tidy!

﻿Europe's astonished reaction to the Arab Spring shows the extent to which we are still influenced by images of the strange and unfamiliar Orient. An essay by Karin Gothe

Oh, if we'd only known, or had an inkling... dismay at Europe's short-sightedness with respect to the upheaval in the Arab world is great. No one in Europe had expected the vehemence and extent of revolts in Tunisia, Egypt and Libya. Diplomats, politicians and advisers have since been wondering rather remorsefully whether or not and how the developments might have been predicted. The State of Peace Yearbook, compiled annually since 1987 by the five Institutes for Peace Research and Security Policy in Germany, has just been published and also poses the almost shame-faced question of why "developments such as the Arab rebellion are detected so late".

One of the main reasons is evident: It is our perception of the Orient and the Orientals – backward and resistant to change, at best patriarchal and at worst Islamist. This distorted perception is at the root of the great astonishment befalling Europeans since the beginning of the year when they look to Tunis, Cairo, Tripoli and now Damascus. It explains why the West was so surprised at the Arab uprising, and why reactions to it were so delayed.

Explosive blend of unemployment and repression

One could also criticise the specialists at think tanks, foundations and newspapers – if they had only focused less on what their colleagues were writing and what politicians at home were saying, and had greater faith in their own instincts and research! For sure, many experts had been warning for some time against the explosive blend of youth unemployment and repression in Arab nations. But Arab youngsters' demands for work, democracy and human rights were never really taken seriously.

Did we Europeans not believe and explain that Orientals are "not ready yet", that they – because they have not been through an age of enlightenment and their religion prohibits them from critical thought – are simply not in a position to establish democratic systems? In short: Is it not the case that we simply didn't believe that the Egyptians, Tunisians, Libyans and now the Syrians were really serious about liberating themselves from their immature state?

A modern person in the Arab world must always first provide proof that he is indeed modern. As someone remarked recently, it was striking how often reports on the Egyptian revolution mentioned how clean the streets of Cairo were kept during the unrest, and how efficiently organised the Tahrir Square rallies were. Was such a thing ever mentioned in reports on the autumn of 1989 in Germany? Did the refugees at the Prague embassy dispose of their rubbish?

The differentiation between a superior, rational Europe, and a backward, exotic "Orient" – a view propagated since the 19th century – was unmasked by Edward Said as racist "Orientalism" back in 1978. But the perception still holds to this day: the sometimes lazy, sometimes lustful and bloodthirsty Oriental, captured in paintings by Eugène Delacroix or Jean-Léon Gérôme, still flits spectre-like through our subconscious image database. 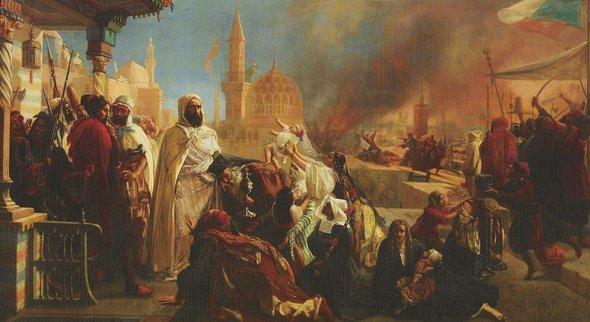 "Those tribal societies down there": The differentiation between a superior, rational Europe, and a backward, exotic "Orient" was unmasked by Edward Said as racist "Orientalism" back in 1978, but the perception still holds to this day, writes Karin Gothe. 1861 Orientalist painting by Jan-Baptist Huysmans (1826-1906)

​​We discover him on our holidays, while walking through the souks of Aleppo, we see him sitting idly outside a café, with a game of backgammon, a glass of tea and a waterpipe, as beautiful veiled women hurry through magnificent courtyard gardens, their robes billowing out behind. We hear about the Jasmine Revolution and smell the jasmine in the Tunisian village of Sidi Bou Said, an idyll of white-chalk houses by a glittering blue Mediterranean, found and invented by the French musicologist Rodolphe d'Erlanger, painted by August Macke and Paul Klee.

These are emotional and constructed images and worlds that are, in our minds, difficult to marry with the modern age, the Internet, and ideas such as democracy and human rights. These are images that have been connoting the otherness of Oriental character since the 19th century. The exhibition "Orientalism in Europe. From Delacroix to Kandinsky", which has just ended at the Kunsthalle der Hypo-Kulturstiftung gallery in Munich, paid homage to these images without irony, almost without distance and without any self-criticism. We love these images – they correspond to our need for a clear world order. Why should it be any different for Europe's political decision makers?

For example, some Bundestag deputies would deflect questions on Afghanistan policy with a knowing smile and a comment on the unfathomable complexities of "those tribal societies down there". The Libyan despot Muammar al-Gaddafi bolstered the clichés whenever he erected his Bedouin tent at international summits and demanded it be guarded by young women. People smiled at his Oriental scene-setting, cringed a little at his weapons, bought his oil and rarely said a word about human rights.

﻿Fear of the sinister unknown

Fear of the dagger-wielding Muslim is the other aspect of our fascination with the Orient. It is a relict of European history, but it is also concrete: Fear of the sinister unknown means Europe continues to keep its borders closed. Fear of the sinister unknown, of an unfettered Muslim people, has led to pacts with military rulers and dictators. It is a fear that extends to a total rejection of Islam, which we often equate with Islamism and terrorism – something we are passionately afraid of.

There has always been a huge interest here in Germany in reports on the terror threat, Islamism or religious intolerance – particularly when these apparently threaten our civilisation. But this threat is only imaginary, because as we romanticise and demonise the Orient, we also idealise Europe as a culturally homogenous fortress of "Judeo-Christian" identity and declare the products of the French Revolution and the Enlightenment as indispensable for modern thought. 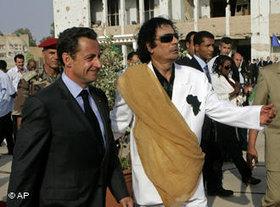 "Fear of the sinister unknown means Europe continues to keep its borders closed." Nicolas Sarkozy and Muamar Gaddhafi in Tripoli

​​The dichotomy of Orientalism, also expressed in Samuel Huntington's concept of the "clash of civilizations", distorts our ability to appreciate reality. It should be remembered that most of the victims of Islamist-motivated violence do not live in Europe. The main cause of political violence in the Arab world is not terrorism, but the authoritarian state. The main obstacle to democratisation of the Arab world is not religion, but rulers' fear of losing power.

If one seeks to overcome the authoritarian systems of the Arab world, one must take a detailed and unprejudiced look at societies there.

It is not enough, out of fear of Islam, to rely exclusively on the views of well-known and European-educated members of the economic, political or intellectual elite. Further reforms must be sought aimed at changing these structures. If these democratic reformers are Muslim, then one must also listen to the opinions of Muslims, even if one doesn't share their religious views.

If one aims to comprehend Arab societies, one can neither exclude Islam nor focus solely upon it. Political foundations must shift their focus beyond the Middle East conflict to those societies currently in flux, and supply politicians in the West with balanced views and insights.

The question is not whether Islam is compatible with the modern age, or what threat Islam poses to Europe – that is old Orientalist thinking. Those who continue to cite Islam or the Oriental essence of the region in their explanations of ongoing events in the Arab world will again be caught napping when the next revolts occur. In Yemen, Saudi Arabia, Algeria, Syria. Trouble is brewing.

The outpouring of solidarity worldwide following the violent death of George Floyd should prompt us to step back and fundamentally question racist structures and privileges based ... END_OF_DOCUMENT_TOKEN_TO_BE_REPLACED

Has it ever crossed your mind that you are eating plastic on a daily basis? That you are drinking it? Apart from the thousands of trending pictures and videos on social media of ... END_OF_DOCUMENT_TOKEN_TO_BE_REPLACED

Libya's plight resembles that of other war-torn countries in the Greater Middle East: internal conflict has spiralled out of control because of misguided foreign intervention. ... END_OF_DOCUMENT_TOKEN_TO_BE_REPLACED

The Arab world suffers from a system in which people are intolerant of "the other". This racist environment contributes to the growth of hostility and antagonism towards anyone ... END_OF_DOCUMENT_TOKEN_TO_BE_REPLACED

In the age of corona, Ankara's regional power strategy is twofold: on the one hand, Turkey is engaged in a charm offensive to revamp its political image, which has suffered lately ... END_OF_DOCUMENT_TOKEN_TO_BE_REPLACED
Author:
Karin Gothe
Date:
Mail:
Send via mail

END_OF_DOCUMENT_TOKEN_TO_BE_REPLACED
Social media
and networks
Subscribe to our
newsletter