A Comic Book Assassination of al-Qaida

Mohamed Sifaoui, an Algerian journalist and considered expert on radical Islamic ideologies, attempts to tackle radical Islamists and their message of terror by using humour as his weapon – and amply makes use of anti-Islamic clichés. By Joseph Croitoru

​​ In 1999, the Algerian journalist Mohamed Sifaoui settled in France to escape Islamist terrorism. Since then, he has fought against every form of Islamism, often in an objective manner, but, on occasion, he has no qualms about engaging in polemics or provocation. Such is the case with his recently published comic book, a collaboration with the graphic artist Philippe Bercovici, entitled "Bin Laden Unveiled," and, as announced in the subtitle, makes no less a claim than being "a comic book assassination of al-Qaida."

Sifaoui employs humour as his weapon to tackle the terror propagated by radical Islamists and to bring his reader to laugh at their most horrible traits – hate, barbarism, stupidity, and fanaticism. And there is another feature to add to this list, their supposed obsession with sex. The comic book alleges this to be one of the chief character traits of Bin Laden – and he isn't alone here.

The background story of the comic has Bin Laden finally being captured on the Pakistani-Afghanistan border in the year 2016 by the Americans, who are drawn to look especially stupid. The now white-haired al-Qaida founder languishes in prison and can only think of one thing – sex. The male and female CIA agents interrogating the terrorist leader end up together in bed. Also featured as a participant in the long hearings reconstructing the life story of the prominent prisoner is the former American President Bill Clinton, whose character here is largely reduced to his famous affair.

​​Such a sexist and clearly crude provocation is probably intended to provide a satirical counterbalance to Sifaoui's ambition of presenting a more-or-less factual version of the most significant biographical moments of the al-Qaida leader's life.

The balancing act between documentation and satirical fiction, however, falls flat, and the humour even more so. This is especially the case in the first quarter of the book, where the young Bin Laden is portrayed as a spoiled idiot (which in no way corresponds to reality) swimming in money (which he truly has). He is frequently the butt of dirty jokes, but these tend to become more infrequent as the book progresses.

Although this makes for livelier reading in part, this reviewer found himself laughing only once – a rather disappointing result measured against the inflated promises of humour the author assures his readers in the book's preface – when an old Jihadist preacher quietly curses Osama, who is looking for contacts, for being such an idiot and hopes that he "dies a martyr's death".

In the course of the narrative, facts come to the forefront, yet the reader is constantly confronted with anti-Islamic clichés, which are intended to be funny. Perhaps these have the desired effect, but only among those readers who want their typical Western prejudices confirmed. 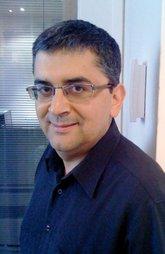 "A subject which will not bear raillery is suspicious": Mohamed Sifaoui, a joker and a journalist

​​It is well known that potential martyrs are recruited in the Holy War with promises of reward in the afterlife. Yet, this is neither an innovation by nor a central motivating factor for the terrorists, whose motivations should not be reduced merely to the enticements of virgins in paradise. Here is where the Sifaoui the provocateur and Sifaoui the informative fighter against terrorism, who touts the adherence to reality of his comic strip, get in each other's way.

By contrast, the illustrations maintain a sense of consistency, even though they freely make use of images found in the tradition of Western orientalism. The Islamic terrorists, with their long, ominous faces, gigantic crooked noses, swollen lips, and straggly beards, could easily be taken for a band of robbers in the One Thousand and One Nights.

The graphic portrayal of Americans as blockheads probably provided additional amusement for some anti-American inclined French readers. Perhaps it is even thanks to the graphic instrumentalisation of such stereotypes that the book has achieved high sales in France. And then there are the domestic references aimed at the French reader, which, sadly to say, are not always comprehensible to the reader abroad.

Comic Book against Teenage Islamism
Speech Balloons for Sleepers
A German State Office for the Protection of the Constitution wants to deter students from radical Islamism – with a clichéd comic book and ingratiating advice such as "Don't play on the team of the mujaheddin". By Wolf Schmidt

Muslim Superheroes
The Arab Hulks
In the comic book The 99, Muslim superheroes fight for a better world – and offend conservatives. Sonja Zekri reports

Portrait of Mohamed Sifaoui
Criticising Radical Islam
The Algerian publicist Mohamed Sifaoui is considered an expert in radical Islamist networks and ideologies. His television documentary 'Undercover in al-Qaida' turned him into a target for fundamentalists, forcing him to go into hiding for a while. Margit Hillmann met the journalist in Paris

END_OF_DOCUMENT_TOKEN_TO_BE_REPLACED
Social media
and networks
Subscribe to our
newsletter