A first novel by Mohammed Hanif is a rollicking ride through the politics of the Pakistani military rule of Zia ul-Haq in the eighties. Irfan Husain says that the book has lessons too for the current rulers of Pakistan as they emerge from nine years of military rule

​​ Ali Shigri, the narrator of Mohammed Hanif's "A case of exploding mangoes", complains about being forced to read Rilke by his friend Obaid, or Baby O. And when the crumpled pages of Rilke's poems are discovered in the absconding Baby O's mattress, this is put down as another black mark in the missing Pilot Officer's book. Welcome to the Kafkaesque world of Hanif's air force training academy.

Actually, the author is very qualified to write about the facility as he graduated from it in the Nineties, and went on to join the Pakistan Air Force. He resigned his commission to become a journalist, first in Pakistan, and then with the BBC in London.

"A Case of Exploding Mangoes" is his first novel, and it works well on several levels. A savage satire, it skewers General Zia and the coterie of officers and sycophants who ruled Pakistan from 1977 until 1988 when a mysterious plane crash rid the country of this dictator. His rule is largely responsible for the upsurge of Islamic extremism that has shaken Pakistan and the entire region. Supported by the West in the fight against the Soviets in Afghanistan, he unleashed the forces of fundamentalism. Many of the more radical jihadi outfits owe their birth to Zia. Hanif's book is a searing indictment of the general, and everything he stood for.

"Mangoes" traces a number of overlapping conspiracy theories to solve the mystery that still surrounds Zia's death. Apart from the usual suspects (CIA, KGB, the Afghan secret service KHAD), he throws in Pakistan's ISI into the mix for good measure. But most intriguingly, Ali Shigri is also shown as one of the possible assassins. Clearly, by the time he finally died, Zia had made a lot of enemies.

​​ Perhaps the most sparkling passages are the ones Hanif has written to describe Zia, his awful wife and the other generals who fill the book. With relish and a mordant wit, he paints unflattering portraits of the mediocre officers who ruled Pakistan for over a decade. The sons of General Zia and General Akhtar (head of the ISI at the time) were both ministers under Musharraf, and must have squirmed at Hanif's treatment of their fathers. Considering that the author is returning to Pakistan after 12 years in London, I hope he is aware of how much the country has changed while he was away.

Crisply written, the book takes the reader on a fast ride from the air force academy to an ISI prison where Ali Shigri is briefly incarcerated. Here, we come face to face with the reality of routine torture and murder in the name of the state. Through much of the narrative, we are accompanied by the enigmatic figure of the chain-smoking ISI operative, Major Kiyani. Intriguingly, this is the name of the current army chief who, before his promotion, was Musharraf's (chain-smoking) head of the ISI.

In the background are the American supporters of General Zia. At an embassy party thrown by Arnold Raphel, the U.S. ambassador who died with Zia in the plane crash, Osama bin Laden makes a cameo appearance. He is greeted by the local CIA chief, and is quite at ease with senior Pakistani and American diplomats and army officers, much as he was in real life in the Eighties.

Politics is the main subject

Hanif has also thrown in a gay relationship between Ali and Obaid. While this must be fairly routine in Pakistani military academies, the subject remains taboo in a sexually repressed society. However, the author does not attempt to fully explore this aspect of the two cadets' friendship, preferring to drive his narrative along on the basis of its powerful political content.

The title of the book is taken from the fact that shortly before Zia boarded his special plane at an army base, a case of mangoes was delivered to accompany the general. There has been much speculation that it 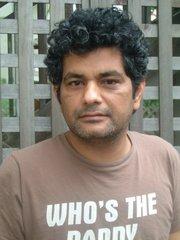 From Pakistan to Britain - and back: Mohammed Hanif (photo © Courtesy of the author)

​​contained some sort of nerve gas that incapacitated the pilots. However, several investigations have failed to pinpoint the cause of the crash, and to this day, it is the subject of speculation. Only two things are clear: the plane did not explode in midair, and nor did it crash due to a mechanical defect. However, the intense heat generated within the wreck of the C-130 left barely any human remains, and General Zia was identified only by his teeth.

Given the subject and the clear writing, it is no surprise that Hanif's book has made the long list for the Booker Award, as well as for the Guardian's First Book Award. In a sense, it is reminiscent of Joseph Heller's iconic "Catch 22", the bitterly satirical anti-war bestseller from the Sixties. "Mangoes" lambasts military institutions often sacrosanct in Pakistan, and tells a fascinating story in fine, rollicking style. Although often hilarious, the book has a serious purpose: Hanif exposes generals for the power-hungry monsters they become after enthroning themselves.

Pakistan, with its long history of army coups and military dictatorship, desperately needs this kind of antidote. Despite nine years of Musharraf, people are already turning against the emerging democratic order, and recalling the "good old days" under army rule. Unless elected politicians get their act together, there is a real danger that Hanif's "Major Kiyani" will heed the siren call, and drive his tank to Islamabad's Presidency.

Mohammed Hanif was born in Okara, Pakistan. After leaving the Pakistan Air Force Academy to pursue a career in journalism, he worked for Newsline, India Today, and The Washington Post. He has written plays for the stage and screen, including a critically acclaimed BBC drama and the feature film The Long Night. Hanif is a graduate of University of East Anglia's creative writing programme. He is currently head of BBC's Urdu Service and lives in London.

"A case of exploding mangoes" by Mohammed Hanif; published by Random House, 2008

Pakistani Conflict Scenarios
If Pakistan Were to Disintegrate . . .
In this essay, political scientist Herfried Münkler analyses Pakistan's on-going political crisis. What would happen if Pakistan were to disintegrate as a state and territorial unit?

END_OF_DOCUMENT_TOKEN_TO_BE_REPLACED
Social media
and networks
Subscribe to our
newsletter