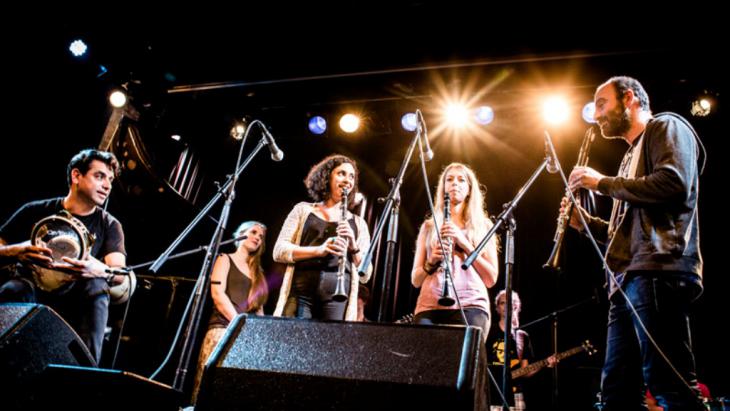 Morgenland Festival Osnabruck 2016
From the Balkans to the Levant

The so-called ″Morgenland Campus″, one of the new formats of this year's festival in Osnabruck, opened a week of intensive encounters between young musicians and world stars. Sara-Duana Meyer took a closer look

The metaphor of music as a common language isn't very popular at the Morgenland Festival. ″Rubbish,″ says Michael Dreyer. ″It′s just as important to agree to develop this common language in the first place.″ As founder and artistic director of the festival, Michael Dreyer has witnessed manifold encounters of people and musical standpoints. Or rather: initiated. For twelve years, he's been inviting musicians to the German town of Osnabruck.

His zest for experiment and improvisation, his interest in people, is channelled into ever new formats. This year it's a masterclass, a collaboration between the festival and the local music conservatory's Institute of Music. The instructors are old acquaintances, either from the Institute itself or else musicians who have been coming to Osnabruck for many years. Here, too, language doesn't suffice and needs illustration. Where do you place Kinan Azmeh, a world-class clarinettist from Syria who has settled in the U.S. or, for that matter, Dima Orsho? The two have known each other since their childhood in Damascus, nowadays they meet in Osnabruck on a regular basis – there are good reasons why the word ″family″ crops up almost immediately when musicians and team talk about the festival.

The attic floor of the Institute′s so-called garden house is stuffy; the German summer arrived late this year. The windows, however, remain closed, because of the neighbours. It's the second day, Rony Barrak introduces a new piece to his group. He's been part of the festival family for ten years and is one of the few musicians from the region who still lives in his home country, Lebanon. Frederik Koster, who teaches jazz trumpet at the Institute and also plays in the Morgenland All Star Band, takes a back seat as Rony puts aside his darbuka for a rhythm exercise. The participants take turns in providing a pattern, using their bodies to clap, stomping, clicking their fingers. Feeling the beat and craving the new input offered by the instructors, many have a go at sequences rarely heard in Germany. 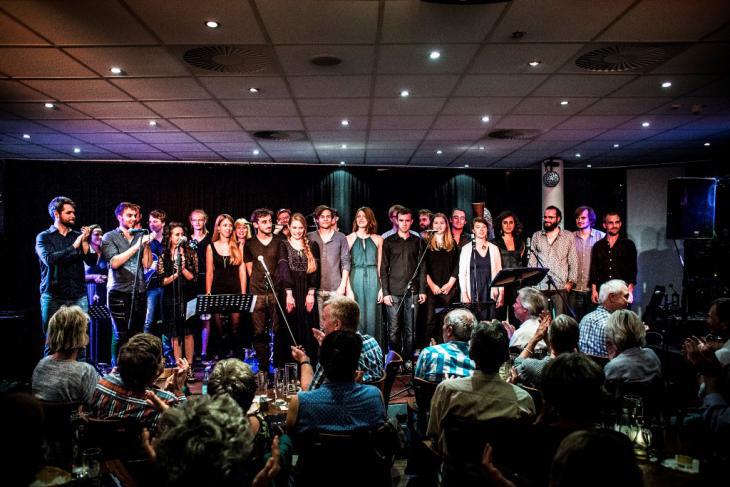 Passionate about experimenting and improvising: the Morgenland Festival Osnabruck has focused on the music of the Middle East since 2005. Its scope is immense, presenting traditional music to avantgarde, jazz and rock. The aim of the festival is to reflect the region in all its diversity as genuinely as possible – and to look beyond the cliches, both positive and negative, that are readily associated with the area

While the instructors don't mind the term ″Oriental Music″, the label World Music feels pejorative. ″What we do ourselves is fusion anyway,″ says Kinan at lunch, before he happily exclaims that everything is going really well. Christof Hillman, who teaches percussion and has a special interest in Persian music, describes the course as a ″vitamin shot″ for the students, the moment of euphoria when it ″clicks″; the ear, the fingers suddenly understand the 'other' music. Pianist Florian Weber explains that just ″like in real life″ the participants have to master often quite complicated pieces within a few days for the final concert, while another focus is to introduce them to as much new music as possible. Rony takes a group selfie. It's family, after all.

This kind of music, which differs mainly through irregular beats and quarter tones from the Western-European tradition (arguably, a terminological clubfoot in itself and as limiting as any attempt at cultural demarcation), is not new to everybody. Quarter tones on a piano, however, are pretty much impossible and Florian's student Aaron Seitz, despite being well acquainted with the harmonies that extend from the Balkans throughout the Levant, envies the singers and wind instrument players who don't have to ″cheat″ like he does by pressing two keys.

″It really is a language of its own,″ says jazz trumpeter Gregor Lener, who graduated recently but still signed up for the course, ″because it's wicked what they are doing here.″ A former band member played saz; especially in new jazz warped beats and unusual tone sequences are common. ″You learn a lot by listening,″ Gregor continues, ″but you can only really play this music once you feel it.″

Difficult parts have to be practised, as always. ″The knowledge is there and we are all excited,″ Martin Fischer confirms, a drummer in his fourth year. Carolin Schnabel, who studies jazz vocals, mentions old modal keys. Only since Bach have quarter tones been abandoned in German music. ″At some point you get a little stuck, it's great to open that up again. We will all be writing songs influenced by this.″

Shabnam Parvaresh smiles a little when she listens to the other participants. In Tehran she used to play clarinet in the Symphony Orchestra yet faced censorship as an artist. An encounter with Michael Dreyer led her eventually to Osnabruck and to the ″Morgenland Chamber Orchestra″. Three years ago, she came to Germany to study jazz and knows the challenges of learning a new musical language well, only from the other side. ″For me everything was very new back then. Here at the workshop, while it's difficult for the others, I feel musically at home.″

Improvisation an exercise in empathy

For Jaafar Daoud these aren't uncharted musical waters either. The young Syrian has been in Germany for a good one and a half years – and ″everywhere where music is.″ He brought his ney along, a traditional wooden flute. In the workshop he improvises a lot, an art far more prevalent in other music cultures than the Western-European tradition.

It was one of the concerns of dean Sascha Wienhausen, author of the master class, to address young musicians like Jaafar. While the festival takes an explicitly non-political stance, questions of belonging prevail. Meanwhile, several of the Morgenland musicians have had to apply for refugee or asylum status, another reason to dedicate this year's festival to the concept of home.

″Home has to do with preservation, but also with the broadening of limitations,″ says Sascha Wienhausen, who considers the workshop as a way of “promoting tolerance″: ″It's great what Michael Dreyer has established. There is no way we cannot participate.″ He won't hear of the current trend in making higher education more efficient. Value in music occurs in quite a different way. ″Germany is an immigration country, hence we have to try to give everyone a voice. Music projects are a great means of achieving that, but you need specific skills to be able to communicate, even informally, through music. Music isn't something you just do.″

A challenge? ″Definitely,″ replies Tabea Mangelsdorf. The participants have to overcome auditory habits and accomplish musical as much as cultural translation. ″This music is part of a rich and complex culture from which we can learn, especially now, with so many people from the Arab world arriving here,″ the voice student says. Thanks to the festival, she says, Osnabruck boasts an open-minded cultural elite. Yet the number of neo-Nazis is also on the rise too. ″We live in polarising times, so we need to become stronger, too.″ And sometimes home can even mean learning a new language.

Home
Print
Newsletter
More on this topic
Interview with Michael Dreyer of the Osnabruck Morgenland Festival: A hub connecting the Orient and the OccidentInterview with Kinan Azmeh and Dima Orsho: "All we can do is sing and play our hearts out"Morgenland Festival Osnabruck official website
Related Topics
Arab music, Dialogue of Cultures | Intercultural Dialogue, Musical worlds, Muslims in the West
All Topics

Giessen, Eichsfeld, Kusel, Berlin – cars bearing old German number plates are the latest trend on the streets of Cairo. Many Egyptians regard the discarded plates as chic. What ... END_OF_DOCUMENT_TOKEN_TO_BE_REPLACED

Tunisia has been going through a severe economic and political crisis in recent years. More than one in three young people there are unemployed. For many skilled, qualified and ... END_OF_DOCUMENT_TOKEN_TO_BE_REPLACED

German imams have publicly expressed their solidarity with the women of Afghanistan. In a letter of protest, the clerics say that the Taliban regime's decree barring women from ... END_OF_DOCUMENT_TOKEN_TO_BE_REPLACED

At the end of every year, the team at Qantara.de gives you a run-down of the ten most-read articles on the site over the past 12 months. Here is a quick overview of the stories ... END_OF_DOCUMENT_TOKEN_TO_BE_REPLACED

Social engagement is often motivated by religious factors. A new book explores the background to these community efforts and appraises how effective they are in helping to ... END_OF_DOCUMENT_TOKEN_TO_BE_REPLACED

The government in the Netherlands, one of the last European nations to abolish slavery, has made an historic apology. But some feel that there is still a long way to go. By Ella ... END_OF_DOCUMENT_TOKEN_TO_BE_REPLACED

Comments for this article: From the Balkans to the Levant

END_OF_DOCUMENT_TOKEN_TO_BE_REPLACED
Social media
and networks
Subscribe to our
newsletter