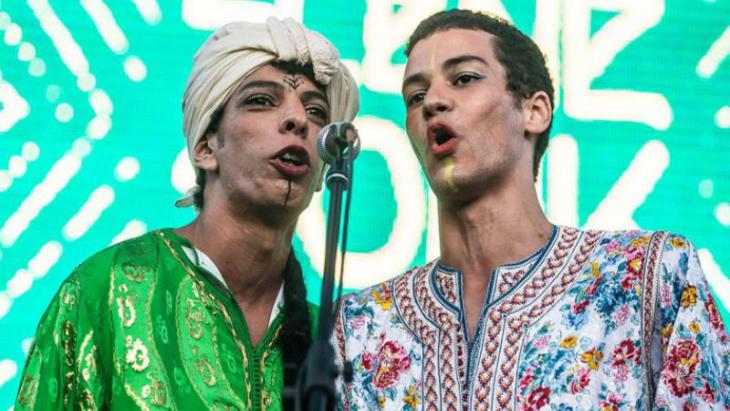 The recently formed band -- called Cabaret Al-Shaikhat, or the Folk Divas' Cabaret -- has stirred controversy among the more conservative sections of Moroccan society. The backlash was similar to the stir created by Mashrou Leila when the Lebanese band, with its openly gay lead singer Hamed Sinno and its contentious social and political views, performed in Morocco last year.

However, Cabaret Al-Shaikhat is certainly appealing to the more progressive elements of Moroccoʹs younger generation. The "visual shock" of transvestism is the most controversial aspect of the band's performances, according to Cabaret Al-Shaikhat's leading member Ghassan Al-Hakim. The bearded band members appear on stage wearing women's kaftans and makeup, with heavy eyeliner and dark lipsticks.

That Cabaret Al-Shaikhat has come under fire is hardly surprising. According to global public relations firm ASDA'A Burson-Marsteller, 55 percent of Moroccan youth belong to the conservative camp. But unlike those critics who would not accept cross-dressers, many fans admire the band for reviving an ancient Moroccan art form.

The band was inspired by a play telling the story of young men who adore ʹaitaʹ music and would thus would hide every night inside a bathhouse dressing like female folk singers to imitate their performances, reveals Cabaret Al-Shaikhat member Hamid Al-Khaiat.

The launch of the band was modest: Cabaret Al-Shaikhat made its debut at a Casablanca restaurant in May 2016. The audience lauded their performance, which encouraged the band members to carry on. The band rose to prominence last summer when it performed at the Boulevard Festival in Casablanca. 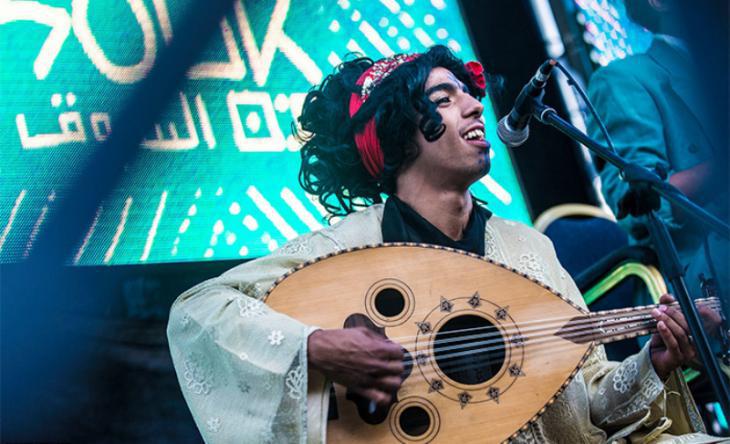 Popular with Moroccoʹs younger generation: the breakthrough for "Cabaret al-Shaikhat" came in the summer of 2017, when they performed at Casablancaʹs Boulevard Festival. The band was originally inspired by a play telling the story of young men who adored aita music and thus would hide every night inside a bathhouse, dressing like female folk singers to imitate their performances

At the time, Al-Hakim recalls, the band members were not bearded and did not have their current more masculine appearance. Al-Hakim thinks it is fascinating how a passion for ʹaitaʹ music has brought young men from across Casablanca together. Visiting impoverished districts where the typical image of a virile masculine man is dominant, they have been warmly received. The audience in these areas would have been willing to protect the band if needed, he said.

An act of feminism by men?

Some observers, including Zainab Fasiki, a comic artist and women's rights advocate, interpret the band's performances as an act of feminism. She is proud of Cabaret Al-Shaikhat "because it does something brave and unique in our society. To be a man and wear women's garment is not ordinary or acceptable here."

"They are also boosting the status of female folk singers, showing just how important and integral they are to our culture … We are in dire need of artists who are brave enough to take on the many taboos we face," she adds.

In interview with Al-Yaoum24 newspaper, Al-Hakim commented that the band "supports women and defends their causes and rights based on the principle of co-existence with men". The band, however, does not include female members. Al-Hakim explains that women are not even allowed to attend rehearsals because "the presence of a woman means we would end up imitating her femininity and we don't want to play the role of a typical woman. We rely on our imagination."

"By dressing like female folk singers, we've realised how hard it is to be a woman," he said. "We have become prone to annoying stares, something girls are subject to around 80 times a day. As a result our sympathy for women has grown." 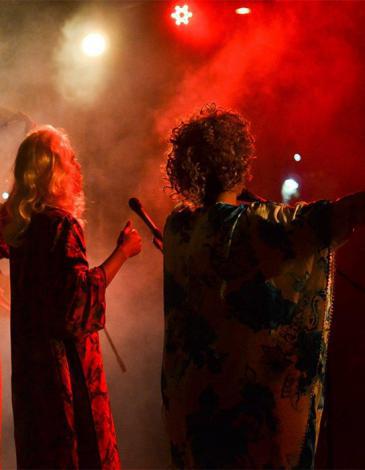 In solidarity with the women of Morocco: "By dressing like female folk singers, we've realised how hard it is to be a woman," admits band member Al-Hakim. "We have become prone to annoying stares, something girls are subject to around 80 times a day. As a result, our sympathy for women has grown"

On more than one occasion the band members have defended female folk singers -- "defamed" by the French occupation -- by shedding light on what really happened. Before performing, Cabaret Al-Shaikhat tells stories about them and highlights their role as political activists and spiritual leaders who stood firmly against the occupation. They promoted noble principles such as honesty and love, the band tells the audience.

Writing in the Moroccan newspaper Al-Maghress, researcher Mohamed Ramses says that female folk singers "played a patriotic role resisting power abuse… They also called for the expulsion of the occupiers."

An emblem of nobility

Moreover, Ramses continues, they were an "emblem of nobility; the dignitaries would bring them in to perform during their private parties… However, the market logic and occupation authorities transformed them from a symbol of resistance into a cheap commodity. Even tourism has turned Al-Shaikhat from [a form of] local creativity expressing the Moroccan identity and the depth of the authentic heritage, to eye candy that is serving other purposes, such as attracting tourists".

Ramses explains that many of the folk divas were given insulting names; the name-calling device indeed inflamed hatred towards women's dancing and singing and wiped out what female folk singers stood for.

According to researcher and historian Yones Masoudi, ʹaitaʹ originated among Moroccan Bedouins in the 19th century as a result of famous stories about "Al-Shaikhat" and authoritative leaders, which reflected two social and political realities during that period.

As a matter of fact, ʹaitaʹ is much older than this era. It was the art that documented the arrival of Arab tribes during the Islamic "invasion" of Morocco and beyond. Moreover, it denoted the cultural mixture between the new Arab Bedouins and native Berbers.

The well-known Sheikha Mubarka Al-Bahishiah from the city of Beni Mellal represented her tribe through her poems. Her songs about marriage secured her fame until the early 20th century. However, the French occupation cost her dearly; her revolutionary poems incited fighters to kill the French and inflamed their feelings to attain freedom. This put a target on her back and she was eventually forced to move to the mountains to avoid being assassinated.

Furthermore, according to Abdel-Salam Al-Khalofy, a researcher who focuses on Moroccan music genres, the music of the east cast a shadow over ʹaitaʹ in Morocco. He said the difficult Moroccan colloquial language had kept ʹaitaʹ from spreading regionally. However, the leader of Cabaret Al-Shaikhat says he is determined to resurrect the heritage music that has long been overshadowed by titans like Umm Kulthum, Abdel Halim Hafez and Fayrouz.

Home
Print
Newsletter
More on this topic
15th Gnawa music festival in Morocco: A festival of fusionThe Master Musicians of Joujouka: The faded myth of the goat-godThe Moroccan fusion singer Oum: ''I am a Muslim, but I make decisions about my life''
Related Topics
Arab music, Bedouins, Colonialism, Gender, Musical worlds, Transgender, Women in the Islamic world
All Topics 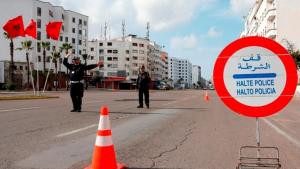 Digitalisation and the coronavirus in Morocco

From care to control?

With a series of digital measures introduced in response to the coronavirus pandemic, Morocco is creating a trade-off between ways to provide rapid support and the parallel ... END_OF_DOCUMENT_TOKEN_TO_BE_REPLACED

Around the Islamic world, lockdowns and curfews are being extended and religious ceremonies are being cancelled outright in the hope of slowing the spread of COVID-19. Here’s the ... END_OF_DOCUMENT_TOKEN_TO_BE_REPLACED

Several African countries have opened diplomatic missions to Morocco in Western Sahara, a disputed area occupied by Rabat. This has been exacerbating the conflict in an already ... END_OF_DOCUMENT_TOKEN_TO_BE_REPLACED

Coronavirus continues unabated. Iran remains a hub of infection, war-torn Syria has recorded its first case and Yemen is bracing itself for the worst. Here’s the latest from ... END_OF_DOCUMENT_TOKEN_TO_BE_REPLACED

With borders closing and the opportunities for international travel shrinking by the hour, we take a look at coronavirus developments across the Middle East and the wider Muslim ... END_OF_DOCUMENT_TOKEN_TO_BE_REPLACED

As the global economy reels and everyday life grinds to a standstill, we take a look at the spread of coronavirus across the Middle East and the wider Muslim world – and the ... END_OF_DOCUMENT_TOKEN_TO_BE_REPLACED
Author:
Mariam Qamar
Date:
Mail:
Send via mail

END_OF_DOCUMENT_TOKEN_TO_BE_REPLACED
Social media
and networks
Subscribe to our
newsletter