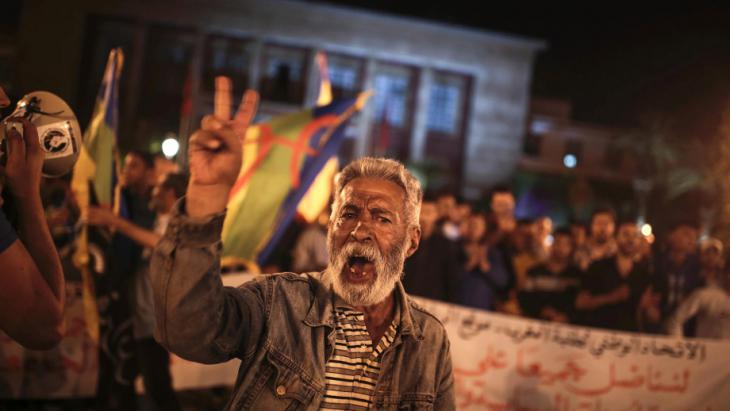 Morocco's blighted Rif region
So little to do – so much time

That the younger generation in northern Morocco are still demonstrating is hardly surprising. Lacking in infrastructure, the Rif region has been economically disadvantaged for years. The area is simply beset with problems. An analysis by Susanne Kaiser

The mountainous Rif region of northern Morocco is a blighted area. Its black economy, isolation, and an overabundance of time are constituents of the fatal mixture currently afflicting northern Morocco.

At first glance, the first of these three actually appears more like a blessing. Without its smuggling, for example, a region like the Rif would struggle to survive at all. Cigarettes, alcohol, clothing and electronics are all plentiful in Spain and highly desirable to Moroccans. Illegal trafficking is hard work. The business of getting goods from one side of the border to the other means shifting heavy loads over large distances. With trading on the black market virtually the only option, however, many families have no alternative but to undertake these arduous journeys.

This onerous burden usually falls to the lot of the women in the Rif region. It is they who set out every day for the border and the Spanish enclaves of Ceuta and Melilla to buy tax-free goods for resale in Morocco. The smugglers must set off in the middle of the night and walk many miles if they are to reach the border by early morning and find a place in the queue. Competition for places is fierce, with up to 25,000 smugglers arriving on any given day, all desperate to reach the city centres of Ceuta and Melilla.

Securing the best place in the queue

The opening of the border is the signal for the start of a frantic scramble to see who can reach the department stores first and snap up the most desirable or best goods on offer. Items in the latter category are particularly coveted because it is important to load as much as possible onto one's back if the journey is to be worthwhile. At between 50 and 90 kilograms, their loads are bigger than the women themselves, who sag beneath their heavy loads as they struggle through the burning heat of the day to make their way back over the border.

And for many it will not be a single journey. Some of the women make up to six trips a day in order to ensure there is enough food on the table for the entire family. Very few of the women are working only for themselves according to women's rights organisation "Tawaza". The vast majority of them would stop immediately if they had the choice – especially the older ones. 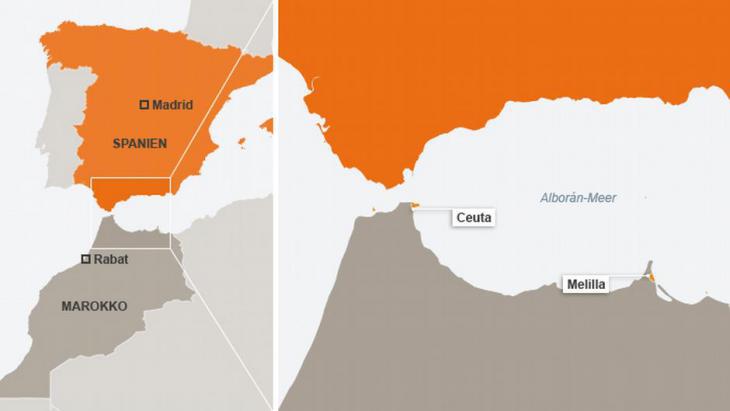 Thriving trade in contraband: many people, the majority of them women set out every day for the border and the Spanish enclaves of Ceuta and Melilla to buy tax-free goods for resale in Morocco. The smugglers must set off in the middle of the night and walk many miles if they are to reach the border by early morning and find a place in the queue. Competition for places is fierce, with up to 25,000 smugglers arriving on any given day, all desperate to reach the city centres of Ceuta and Melilla

The scene at the congested border crossing is chaotic. The seething mass of traders, jostling together, all trying to push their way back to the Moroccan side at the same time: huge crowds of people, men and women, bent double under their heavy loads, scrambling to make progress along the narrow border crossing. It's a spectacle that takes place under the watchful eyes of Spanish border guards and Moroccan police. So why is it allowed to happen?

Quite simply, it is allowed because entire towns on both sides of the border depend on the illegal trade for their livelihood. In the case of Ceuta, for example, a city best known for its shabby treatment of refugees, the black market has become the main source of income and long since integral to the city's survival. On the Moroccan side of the border around 400,000 people are indirectly dependent on the women's work. Around a tenth of the population of northern Morocco, rely on the smugglers to put food on their tables. In the Rif Mountains there are precious few alternatives, because the cash crop the region is famous for is not one intended for easy resale.

Home
Print
Newsletter
More on this topic
Morocco and the return of autocracy: Playing with fireAttempts to decriminalise hashish in the Arab world: To legalise or not to legaliseSocial unrest in the Arab world: Guilty of gross negligence
Related Topics
Drugs, Economy, Migration, Mohammed VI of Morocco, Moroccan opposition, Poverty, Refugees, Social movements
All Topics

Since returning to power in Afghanistan, the Taliban have steadily eroded the rights and opportunities of women and girls, particularly their access to education. But Afghans are ... END_OF_DOCUMENT_TOKEN_TO_BE_REPLACED

The book "The Invention of the Maghreb: between Africa and the Middle East" prompts us to review basic terminology. This includes terms that we use almost every day as if they are ... END_OF_DOCUMENT_TOKEN_TO_BE_REPLACED

Tunisia has been going through a severe economic and political crisis in recent years. More than one in three young people there are unemployed. For many skilled, qualified and ... END_OF_DOCUMENT_TOKEN_TO_BE_REPLACED

At the end of every year, the team at Qantara.de gives you a run-down of the ten most-read articles on the site over the past 12 months. Here is a quick overview of the stories ... END_OF_DOCUMENT_TOKEN_TO_BE_REPLACED

The government in the Netherlands, one of the last European nations to abolish slavery, has made an historic apology. But some feel that there is still a long way to go. By Ella ... END_OF_DOCUMENT_TOKEN_TO_BE_REPLACED

To celebrate the bicentenary of the deciphering of the Rosetta Stone, the British Museum is running an exhibition entitled "Hieroglyphs: unlocking ancient Egypt" until February ... END_OF_DOCUMENT_TOKEN_TO_BE_REPLACED
Author:
Susanne Kaiser
Date:
Mail:
Send via mail

END_OF_DOCUMENT_TOKEN_TO_BE_REPLACED
Social media
and networks
Subscribe to our
newsletter