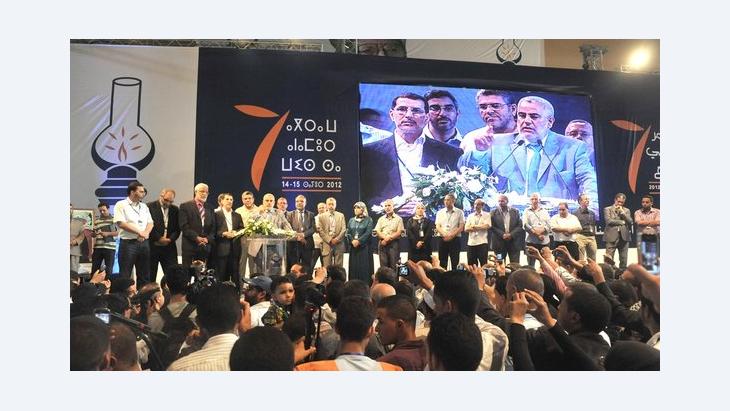 ﻿Recent opinion polls show that the Justice and Development Party (PJD) leading the ruling coalition in Morocco still enjoys significant public support. Even though the party's most prominent plans (such as the amending of broadcasting terms as part of the journalism code overhaul, reforming the judiciary, combating corruption, and revamping state subsidies and social security programs) have stalled, the PJD's popular support remains strong.

It fact, this support has steadily risen, as seen in the results of recent partial elections held in Tangiers, Marrakesh, and Fez. Furthermore, the party has been expanding its reach, adding new local branches in rural areas traditionally dominated by the parties close to the palace.

The PJD has been able to maintain widespread backing due to its approach to politics both within the government and outside of it. The most striking impression given off by the party's cabinet ministers is how little their powerful government positions have changed them – many have retained their popular appeal. 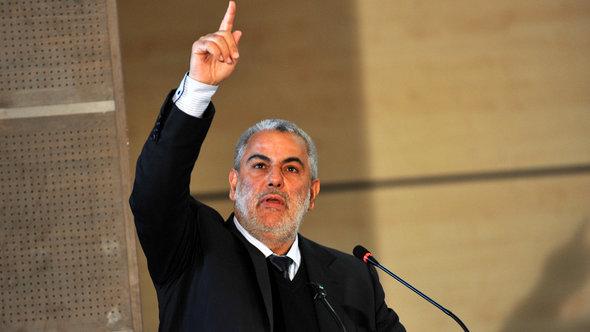 The PJD's popularity is undeniable, with a recent opinion poll showing PJD general secretary Benkirane still having widespread support among the electorate. But Benkiran'es "reluctance to ruffle royal feathers" means that his campaign promises will not yet see the light of day, writes Mohammed Masbah

​​For instance, though Prime Minister Abdelilah Benkirane's opponents accuse him of pandering to populist sentiment, he continues to hold high approval ratings among a public largely charmed by his style.

Benkirane has been utilizing his monthly meeting with parliamentarians to reassure citizens that he is determined to see through reforms and root out corruption. His rhetoric gives citizens the feeling that he is battling pockets of corruption on their behalf – in his colourful slang, the "crocodiles and devils" of dishonest officials – and needs their continued support.

Benkirane falls back on this language of victimization, which still has resonance amongst party supporters, whenever he runs into trouble pushing through his reforms.

Local PJD parliamentarians have also continued their trademark style of direct communication with their constituents – offering the same social services that they initially used to garner support.

As they do every year, in 2013 Islamist parliamentarians launched the "al-Misbah caravan" (the term deriving from the PJD symbol, the lamp, or misbah) from March 28 through March 31 in all regions of Morocco. This consisted of a series of town hall-style meetings held in villages and cities to communicate directly with citizens, allowing legislators to explain their experiences in government and the problems they face.

The party's approach has not been significantly altered by their ascent to power, as the mid-level officials that form the organization's backbone remain in place and continue to run the party's local and national affairs. Also, a network of civil society organizations associated with the PJD plays a major role in mobilizing and maintaining support.

Dealing with the opposition

In parliament, however, the Justice and Development Party faces significant criticism from a range of political players (including other Islamists), all of whom question whether Morocco's Islamist experiment in government will succeed. The PJD's opponents in parliament, who mostly belong to parties controlled by the palace (widely referred to as "administrative parties") lack legitimacy. 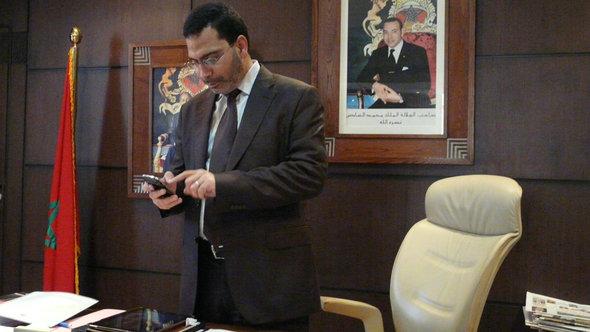 Under the watchful gaze of the King: "Palace loyalists can and have easily stalled the PJD's initiatives, particularly if they threaten royal interests," writes Mohammed Masbah. Pictured: PJD's Minister of Communications Mustapha Khalfi

​​The only exception is the Socialist Union (USFP), which maintains some independence, but is plagued by fragmented and internal conflict – at least partly generated by ongoing royal attempts to coopt it.

In addition to dealing with a contentious – albeit weakened – opposition in parliament, the party has also had to contend with palace manipulations. On several occasions, Benkirane has criticized the royal entourage for its interventions, resulting in tensions; a rivalry between the two is becoming visible in a range of political, administrative, and economic fronts.

But the most serious challenges have come from the PJD's partners in the ruling coalition – particularly the Istiqlal Party and the Popular Movement (MP), through which the palace actively intervenes to set the government's tempo.

Now, apparently, the palace has decided that the government's survival is no longer in its interest, so it has used both to break apart the coalition. Already on January 3, Hamid Chabat, Istiqlal's secretary-general, called for a reshuffling of the cabinet to address the slow pace of progress. The Istiqlal Party had, on several occasions, criticised the PJD for failing to shore up the economy and solving pressing social problems.

Now, finally, on 12 July, the Istiqlal Party made good on their threat to quit the government, raising the possibility of early elections. Alternatively, though some analysts believe the likeliest scenario is still a reshuffle of cabinet.

But either way, for the PJD one basic problem remains, despite their widespread popular support: Palace loyalists – both in government and in parliament – can and have easily stalled the PJD's initiatives, particularly if they threaten royal interests. 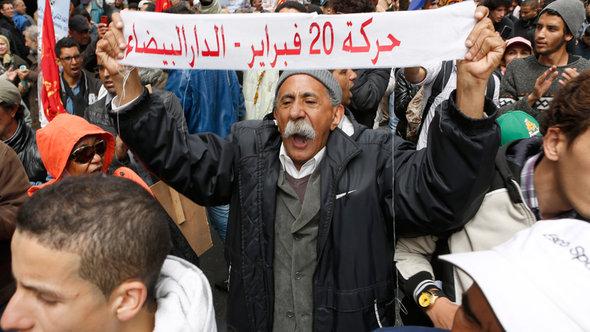 Despite the PJD's popularity, the government has increasingly been criticized because of its failure to address unemployment and rising prices. Pictured: anti-government protesters in Rabat, March 2013

​​The first example came in April 2011 when Minister of Transport Abdelaziz Rabbah (of the PJD) published a list of those benefiting from inter-city transport licenses (many of these licenses are arbitrarily granted as royal favours, with beneficiaries selling or renting them out). This attempt at transparency was sharply criticized by the two coalition partners as a populist move that had not been sufficiently studied beforehand.

A second example came when the Minister of Communications Mustapha Khalfi (also of the PJD) moved to modify public broadcasting terms as part of a broader initiative to revamp journalistic practices in the country.

After the Higher Council of Audiovisual Communication approved Khalfi's proposal (which included an initiative to broadcast the call to prayer five times a day and to ban the promotion of gambling), a group of influential journalists – including the prominent Salim Cheikh and Samira Sitail of the national channel 2M – resisted the decision and publicly denounced it, claiming the PJD was seeking to "Islamize" broadcasting in the country.

Some observers, however, pointed out that these journalists' were perhaps more fearful of new standards of transparency and good governance required in the terms. Following a bitter dispute, the king intervened and scrapped these terms, and now the ministry of communications is set to introduce a revised draft.

These standoffs have reinforced the PJD's conviction that real headway is not possible without royal support. Benkirane has been doing his utmost since to stay in the palace's good graces and avoid conflicts – even when it requires forgoing some of the executive authority invested in the government through the 2011 constitutional amendment. His reluctance to ruffle royal feathers has essentially meant that Justice and Development's campaign promises will not yet see the light of day.

In weighing short-term survival (appeasing the palace) against an aggressive pursuit of the significant reform agenda that party supporters were hoping to see, Benkirane has proven pragmatic. But then again, he may just be hoping this is the right way to wear out the palace opposition.

Such policies might indicate to many that the prime minister is not really the captain of the ship of state and that that wheel remains firmly in the king's hands. Benkirane is simply trying to hold on amid rough waters – without losing too many of his own people.

Mohammed Masbah is a visiting fellow at the German Institute for International and Security Affairs (SWP) in Berlin.

Sultana Khaya, 41, has been peacefully resisting the Moroccan occupation of Western Sahara for many years. Because of her campaign to assert the self-determination of the Sahrawi ... END_OF_DOCUMENT_TOKEN_TO_BE_REPLACED

Back in 1995, when The Times asserted Islam was to blame for the poor levels of education among women in the Muslim world, Mohammad Akram Nadwi began scouring ancient Arabic ... END_OF_DOCUMENT_TOKEN_TO_BE_REPLACED

Since Spain abandoned its traditional neutrality towards the conflict in Western Sahara, Morocco has announced a "new phase" in relations between the two countries. But what is ... END_OF_DOCUMENT_TOKEN_TO_BE_REPLACED

Tunisia's president has been carrying out a coup by degrees, demolishing the country's hard-fought democratic gains bit by bit. With an economy in turmoil and a splintered ... END_OF_DOCUMENT_TOKEN_TO_BE_REPLACED

The German government is planning to legalise cannabis before the end of this legislative period. So what does Islam have to say about its consumption? Will changing the law alter ... END_OF_DOCUMENT_TOKEN_TO_BE_REPLACED
Author:
Mohammed Masbah
Date:
Mail:
Send via mail

END_OF_DOCUMENT_TOKEN_TO_BE_REPLACED
Social media
and networks
Subscribe to our
newsletter