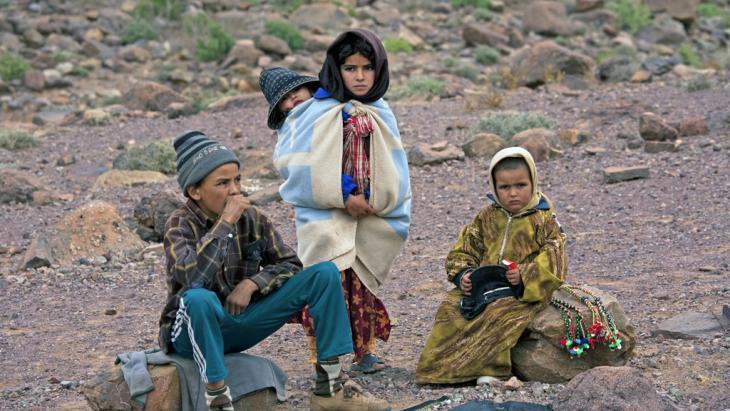 Morocco's social gulf
The many faces of poverty

Travel guidebooks and tourist agencies are fond of using flowery language to sell Morocco as a holiday destination, describing it as a "nation of contrasts". In view of the omnipresent social disparities that define Moroccan society, this is actually a very accurate description. By Susanne Kaiser in Casablanca

When one moves outside the chic seaside resorts with their spruced up souks, the romantic image of Morocco quickly gives way to harsh reality. Here, Morocco shows a different face: the face of poverty. Although the well-developed infrastructure might initially lead one to believe otherwise, destitution, need and suffering are rife in this, the most western of Arab nations. Bitter poverty coexists alongside opulent wealth and casual wastefulness.

Looking out of the train, one of the most modern on the entire African continent, one sees slums of corrugated iron and plastic sheeting extending alongside the tracks from Marrakech in the south to Tangier in the north. Entire slum cities, known as "bidonvilles", run rampant through large metropolises such as Casablanca or Rabat, between the housing estates in middle class neighbourhoods, on the rooftops of houses in the old town – the slums don't even keep their distance from grand, prestigious buildings such as the marble Hassan II Mosque, but simply establish themselves right on the doorstep. Strictly speaking, they were there first.

One can encounter poverty in Morocco anytime and anywhere, for example in the toothless smile of people over the age of 30. Healthcare in Morocco is expensive and not something everyone can afford. But it's not just teeth that are a luxury, the same can be said for education, housing, work and even for access to water, food and electricity. A fifth of the Moroccan population is living on or below the poverty line. According to information from the CIA World Fact Book and the World Bank, that's 6.3 million people who lack these essentials.

In 2011, the king himself pledged to address the high cost of all these commodities and to facilitate access to them as part of a constitutional reform. This was not the first time that Mohammed VI, abbreviated in common parlance to M6, was regarded by the Moroccan people as "King of the poor". He liked to be referred to in this way at the time of his coronation in 1999. Thus far, this well-tended image has not been dented by the fact that he is in fact one of the richest monarchs in the world (according to Forbes, he had an estimated private fortune of US$2 billion in 2007). 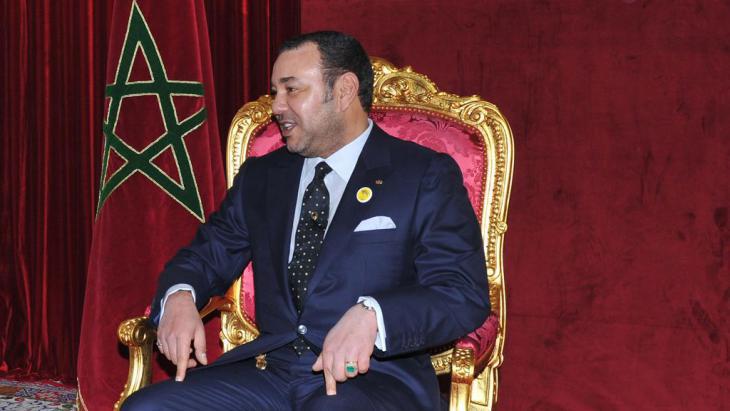 King Mohammed VI: "King of the Poor" or "the person responsible for the poverty"? Writer Abdellatif Laabi accuses the Moroccan regent of running the country "like a multi-national concern with the goal of increasing the wealth of its shareholders"

For this reason, critics would much rather see him understood as "the person responsible for the poverty" than as the "King for the poor". For example, as the writer Abdellatif Laabi – a critic of the regime – put it recently, the king is running the country "like a multi-national concern with the goal of increasing the wealth of its shareholders".

Laabi's views are further supported by revelations contained in a book published in 2012 titled "Le Roi prédateur " (the plundering king). In it, authors Catherine Graciet and Eric Laurent reach the shocking conclusion that the king and his cronies lined their pockets with public funds using what could almost be described as Mafiosi style methods and without much of a thought for the common good. The book obviously hit a nerve in the royal household, because it has been banned in Morocco since publication.

Fighting poverty at the whim of the "makhzen"

Although the state did indeed invest in programmes to fight poverty and although progress was made, many criticise the fact that little has changed for the majority of the nation's poor. An appraisal of the royal constitutional reform of 2011 makes it clear that from a legal point of view too, poverty represents a fundamental and profound problem in Morocco and requires appropriate measures that tackle more than just the symptoms. To avert the risk of the country sliding into the same state of upheaval as others affected by the Arab Spring movements, reforms to stabilise the nation were hastily ushered in over a period of just four months in 2011.

Since then, social rights – for example, rights to health, social welfare, education and training or appropriate housing, for example – have at least been mentioned in the constitution. Nevertheless, the citizens of Morocco still have to hope that good governance will actually lead to the realisation of their basic rights. For example, although a committee on economic and social affairs was set up, and state subsidies for staple foods and cooking gas were increased, these basic rights are not guaranteed by the constitution, which means that no one can take legal action to get them.

As a consequence of this, the old dependency of ordinary people on the goodwill of the "makhzen", the privileged elite loyal to the king, remains in place, as does the oil that keeps the wheels of the system turning: the corruption that permeates all institutions. 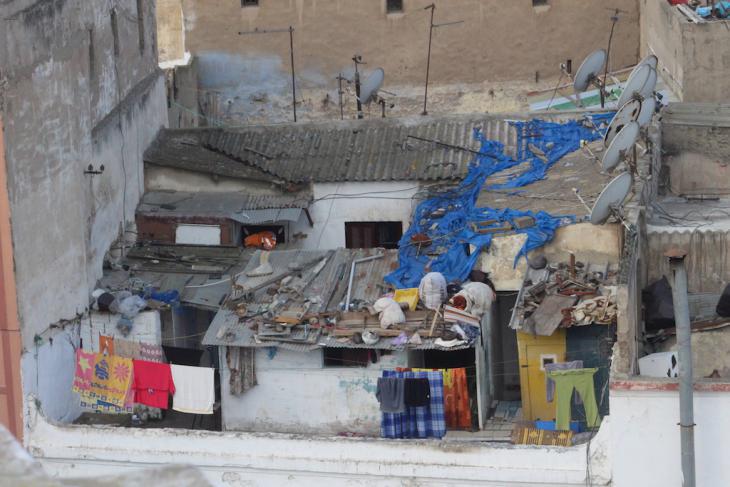 As with other basic necessities, housing is too expensive for large parts of the Moroccan population. The situation is compounded by a rural exodus and rampant urbanisation. The result is shanties and makeshift homes that are built on top of other buildings, such as here in Casablanca

This exacerbates the social gulf rather than lessening it. The World Bank also comes to this conclusion in a report from March 2014. This report notes that in Morocco, inequality in relation to income and access to basic goods is especially high. In an analysis of what's known as the "Gini coefficient", which measures the dispersion of this inequality within a nation, with 0 representing absolute equality and 1 absolute inequality, Morocco had an estimated coefficient of 0.41 in 2007, which puts it behind even the sub-Saharan states of Mali, Burkina Faso and Chad.

Escaping the vicious cycle of poverty

The differences between the big cities and their peripheries are stark. Two-thirds of the country's poor are concentrated in more isolated rural regions. The rural population has to battle several challenges at once: inadequate infrastructure means extensive rural areas are insufficiently supplied with water and electricity, communal wells are difficult to reach.

Moreover, agricultural production depends totally on water, which means that poverty or prosperity hinges on adequate supplies of water. This has consequences for the entire country, as agriculture is one of the key pillars of the Moroccan economy, representing some 15 per cent of the nation's GDP.

In addition, inadequate transport network coverage means many Moroccan children have trouble getting to school. The poor access to schools and training centres explains the high illiteracy rate in rural regions of Morocco, which is several times higher than in urban centres. In 2004, for example, the Moroccan office for statistics HCP ("Haut Commissariat au Plan") put the illiteracy rate for Marrakech at 32 per cent in 2004 and for the provinces around the city at more than twice that rate, namely 66 per cent. Women in rural regions are disproportionately affected, with 72 per cent of women living in the Atlas province of Al Haouz south of Marrakech registered as unable to read or write in the year 2012.

It is difficult to escape the vicious cycle of poverty: infrastructural difficulties that hamper access to education exacerbate educational inequalities that are in turn responsible for poverty. Regions that depend on agriculture are becoming yet poorer due to a lack of water. Then there is what is being referred to as the "exodus of the young". They often see only one way out of the misery: to seek their fortune elsewhere, in a big city. 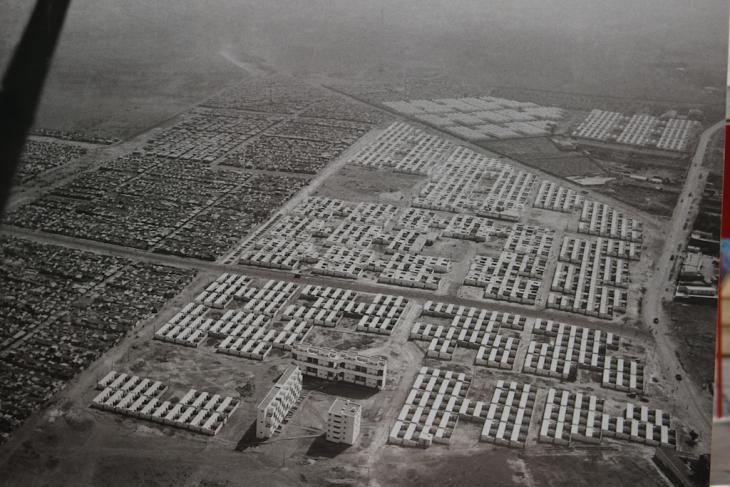 An aerial photograph shows "bidonvilles" side by side with new housing in Morocco: "The programme 'Villes sans Bidonvilles' ('cities without slums') was introduced ten years ago and seeks to replace the shanty towns with publicly financed social housing. Without any public consultation, the decision was taken to gradually clear and demolish the sprawling slums"

Slums as a result of urbanisation

But even here, new arrivals find that the streets are not paved with gold, especially if they are not well educated. Figures from the World Bank put youth unemployment in metropolitan centres as high as 35 per cent. Moreover, the process of large-scale urbanisation that Africa has been experiencing for years is resulting in a proliferation of residential construction and homelessness.

The Moroccan political system is also not really doing anything to tackle this problem, particularly as it is only taking steps to combat the symptoms but not the causes. The programme "Villes sans Bidonvilles" ("cities without slums") was introduced ten years ago and seeks to replace the shanty towns with publicly financed social housing. Without any public consultation, the decision was taken to gradually clear and demolish the sprawling slums. But despite the unfavourable living conditions, the residents of these bidonvilles don't want to be simply ripped out of their social structures and relocated. Many are putting up bitter resistance, for example most recently last June during the clearance of the largest slum in the heart of Casablanca, the "Kariane central".

Home
Print
Newsletter
More on this topic
Street children in Marrakech: The oasis of Sésame GardenDemocratic change in Morocco: The right king in the wrong monarchy?Migration in Morocco: From emigration to immigrationWomen's rights in Morocco: Gender equality on paper only
Related Topics
Poverty, Education, Gentrification, Mohammed VI of Morocco, Refugees
All Topics

The history of Jews and Muslims is far more entangled than you might imagine – but you have to listen out for it. In "Recording History", Christopher Silver takes us on a sonic ... END_OF_DOCUMENT_TOKEN_TO_BE_REPLACED 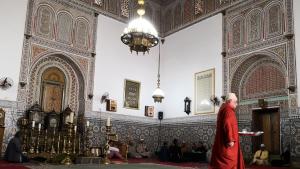 Morocco's Sufi traditions go back centuries. Now King Mohammed VI is trying to use them to combat extremism. His programme of reforms includes the promotion of Sufi movements and ... END_OF_DOCUMENT_TOKEN_TO_BE_REPLACED

A conflict rooted in identity is currently gaining traction in Morocco. It began with demands to relieve the "burden" of Fusha (classical Arabic) by implementing a linguistic ' ... END_OF_DOCUMENT_TOKEN_TO_BE_REPLACED

The Women's Africa Cup this year in Morocco was a resounding success. The Moroccan team was the first Arab women's football team to qualify for a World Cup. By John Duerden END_OF_DOCUMENT_TOKEN_TO_BE_REPLACED

The southern shores of the Mediterranean Sea are losing sand faster than almost anywhere else. The ecological and economic damage is immense. The good news is, there are ways to ... END_OF_DOCUMENT_TOKEN_TO_BE_REPLACED

Comments for this article: The many faces of poverty

While there is poverty especially in the countrysides and some isolated deserts , this article is exagerating things , for example your numbers about poverty are false ( claiming 20 % instead of 9 % ) , same for literacy you used numbers from 2004 which is a decade ago . Finally your aerial picture claiming to show slums are not slums , it's just small homes ( r +1 ) . It's hard to find slums in casablanca in 2014 even if you look for hours ( three are left equal to 6400 family )

Did you see the emblem in the king's chest? Probably the person who wrote the comment did and does not know about Solidarity Days called for by the king.

The people must take all their political powers back and manage their affairs themselves.

END_OF_DOCUMENT_TOKEN_TO_BE_REPLACED
Social media
and networks
Subscribe to our
newsletter