Even the Minaret Is Admired

In his essay Alen Jasarevic, architect of a mosque built in the town of Penzberg in Upper Bavaria, pays tribute to Islamic architecture. He hopes that the mosque in Penzberg will provide a shining example for other cities and communities

​​ 18 September 2005. Germany elects its first female chancellor. On the same day the Islamic Forum opens in the small town of Penzberg in Upper Bavaria. The Islamic community proudly presents its new home just outside the city centre.

Numerous Penzberg residents likewise applaud the building. The doubts many felt at the outset have given way to great enthusiasm and acceptance. Even the minaret is admired as a valuable addition to the cityscape.

In the first three years after it opened, more than 15,000 people have visited the forum. The small Islamic community has developed into an important social factor in Penzberg and environs.

German courses for members of the community, a child day-care centre, inter-religious mother and child groups and an ambitious educational support programme for elementary school children are just a few of the numerous offerings initiated by the Islamic Forum. 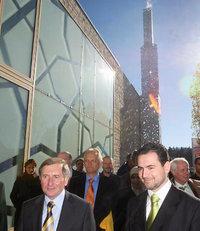 Positive response: Imam Idriz takes the president of the Bavarian parliament on a tour of the main building of the Muslim house of worship in Penzberg

​​ Much has changed in the Islamic community since the mosque opened. The community's statutes require members of its board to be fluent in spoken and written German, the Friday sermon is regularly held in German, and the language of communication in the community is also German (for many of its members, one would actually have to say Bavarian), the vice president is a woman, and mothers are taking on more and more tasks in the schools and kindergartens.

The number of Muslim children at secondary school is up sharply, and contacts with the church, and increasingly with the Jewish community as well, have been cemented and intensified. A high degree of mutual trust and friendship between Muslims and non-Muslims is in ample evidence here.

Adaptation to cultural and social environment

What role can architecture play in this process of rapprochement? Over the centuries, Islamic architecture has brought forth grandiose masterworks. Between Spain and China, South-Eastern Europe and Central Africa, Muslim architects have created a rich legacy of forms. They have very sensitively adapted their mosques – and other buildings as well – to the given social, economic, cultural and climatic surroundings.

This architectural heritage is one point of departure for our work. Beyond questions of art and the Golden Section, however, the social and societal dimension of architecture is also of great import. A mosque will only be accepted and deemed a successful project if it is capable of mastering the social and artistic challenges at hand.

We firmly believe that a Central European mosque type will evolve with which Muslim immigrants, particularly those in the third and fourth generations, as well as non-Muslim citizens can identify more readily than with the traditional mosque types found in the Islamic world.

Next to the church and the town hall, the mosque and the synagogue will become unquestioned features of the cityscape. This development is still in its infancy. Fixed ideas and prejudices against mosques that have become entrenched over generations must be broken down on both sides.

The Ottoman interpretation of the mosque as a building with a central dome and pointed minaret is still regarded as the sole legitimate architectural type. Even mosque opponents evoke this image on their protest posters. In fact, however, this type is just one possibility in a broad spectrum of Islamic architectural variety.

​​ The first mosque was the residence of the Prophet Mohammed: a simple, partially roofed rectangular house built around a courtyard. The muezzin stood on the roof to call the faithful to prayer. The minaret and dome developed only in the subsequent period under the first caliphs.

The ensuing centuries witnessed a wide range of different mosque types. A Chinese minaret, for example, looks more like a pagoda, and an earthen mosque in Africa something like an anthill.

Nevertheless, all mosques fulfil the same task – they are places of prayer and of prostration before God (the meaning of the word 'mosque' in Arabic) and are therefore of equal value. A Central European mosque with its own distinguishing features is therefore every bit as legitimate as, for example, a hall mosque in the Maghreb. Conversely, a traditional Chinese mosque would be just as out of place in Turkey as is a traditional Ottoman mosque in Germany.

Mosques have always been places of communication and not primarily prestigious showcases. Particularly in an open and pluralistic society, the task of communication is of central importance. An unceremonious and unbiased atmosphere is particularly conducive to fruitful conversation. Buildings that insist on the preservation of traditions can instead become barriers between people. 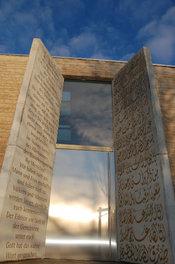 ​​When the Islamic community of Penzberg first invited me to a meeting, I was surprised at the provisional character of their prayer house. This character rubs off over time onto the work of the community and its board of directors. Everything is provisional.

But in Penzberg it was more the case that everything was in flux. In the course of our conversation the young, charismatic imam painted a stirring vision of the future of Muslims in Germany. Finally! A community that sees itself and its religion as a self-evident part of German society.

As the last touches were put onto the mosque, we architects were at the construction site every day to coordinate and supervise the work. During those days I noticed an older man who regularly visited the building site. One day, he took me aside and asked about the minaret, when it was coming and whether it would fit into its environment.

A remarkable work of art

It turned out that he lived right across the street from the mosque and he and his wife were concerned about the outcome of the project. I assured him that I stood by my word that with the minaret the community would be presenting the city with a remarkable work of art.

The neighbour thanked the board of directors at the opening and told them that he and his wife now drink their coffee in the evening at the window with the curtains drawn back so they can enjoy the lovely view.

I often ask myself which part the architecture actually plays in the success of the Islamic community here. The building is naturally only a passe-partout, a frame for the community, and without the activities and openness of its members even the most beautiful mosque would not be a success.

Still, though, the architecture does make a vital contribution. An exceptional, aesthetically pleasing, open and transparently conceived building helps the community to achieve an identity and acquire self-confidence.

In retrospect it can be said that the board of directors acted wisely and with foresight. The fears of the residents were taken seriously and were all laid to rest in the course of many joint meetings. Overall, a project was realised that will hopefully form a shining example for many other cities and communities.

This essay is reprinted with the kind permission of C.H. Beck publishers.

"Moscheen in Deutschland. Religiöse Heimat and gesellschaftliche Herausforderung" (in German only). By Bärbel Beinhauer-Köhler and Claus Leggewie. With an essay by Alen Jasarevic and a photo essay by Mirko Krizanovic. 2009. 240 pages, 46 illustrations, just published by C.H. Beck.

Mosque Construction in Germany
Staying in Dialogue
The construction of mosques has increasingly become a political issue in Germany. It is no different in Frankfurt. Recently, however, the foundation stone was laid for the Hazrat Fatima Mosque. Critics of the construction project were also present. Nilüfer Parasiz reports

Mosque Conflict in Franconia
Home Advantage for Mosque Opponents
A conflict over plans to build a new mosque in the German town of Wertheim extended over 20 years. The documentary film Heimvorteil (Home Advantage) portrays the main participants in this dispute and shows how blocking the construction of a mosque turned back the clock on integration. By Klaus Heymach