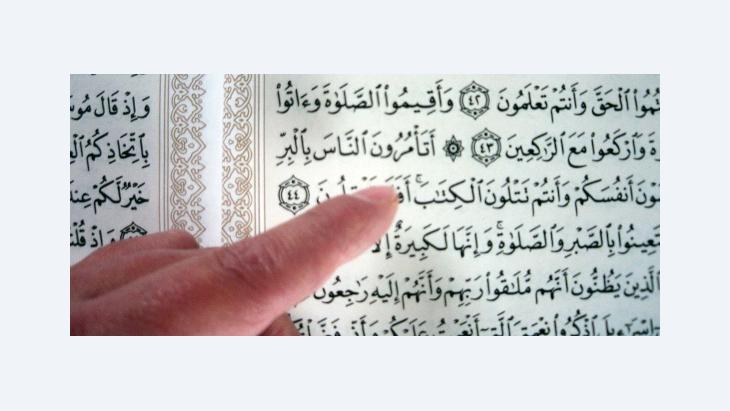 ﻿Mouhanad Khorchide aims to reconcile Islam with the modern world. His aim is to liberate the Koran from all outward trappings and return to the religion's spiritual core Claudia Mende introduces the man and his work

Mouhanad Khorchide has just published a pioneering work that stands as a milestone for Islamic theology in Germany. Khorchide aims to liberate Islam and the Koran from all outward trappings and return to the religion's spiritual core. And his efforts are by no means diminished by the fact that he draws upon the work of other theologians, most notably from the so-called Ankara School and from the Egyptian Nasr Hamid Abu Zaid, who passed away in 2010.

All monotheistic religions are tremendously capable of transformation, even when the contents of their holy books have remained fixed for centuries. In our fast-moving era, it is easy to forget how frequently these religions have been variously interpreted over the course of history. This applies to Christianity and Judaism just as much as for Islam, even though this is often overlooked due to the confrontation with hardening fundamentalist attitudes in parts of the Arab world.

Poisonous pedagogy and threats of hellfire are certainly not restricted to Islam. All theologians face the burning question of how to adequately address the seemingly archaic elements of religion in today's world. In the case of Islam, this question is also highly politically significant in light of the challenges posed by radical Islamists and the Salafi movement.

A philanthropic reading of the Koran

The holy writings of Islam, at any rate, can be read in a philanthropic fashion. This is a position advocated by Khorchide, a religious educator and director of the Centre for Islamic Theology at the University of Munster, Germany, which was established in 2011. 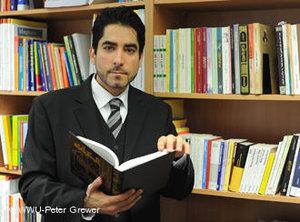 "God is not some sort of accountant keeping track of how often one prays or the length of one's robe or beard." - Mouhanad Khorchide, religious educator and director of the Centre for Islamic Theology at the University of Munster

​​Khorchide makes clear that the core of Islam is not the legalistic side of religion, but rather consists in the relationship between man and a compassionate God developed through dialogue.

It is not a matter of showing obedience to a God who imposes incomprehensible rituals upon man in the fashion of a dictator or an archaic tribal prince. Nor is God some sort of accountant keeping track of how often one prays or the length of one's robe or beard. Instead, Islam is primarily concerned with a humane conception of the world derived from a relationship with the divine.

Only some 80 out of 6236 verses of the Koran contain legal pronouncements concerning the organization of society, such as laws on inheritance and criminal law. Yet, these verses are the central issue for both fundamentalists as well as those with a vitriolic anti-Islamic agenda, and both groups tend to refer to the same passages in the Koran. Khorchide stands in opposition to this fixation and argues instead in the tradition of Islamic mysticism. "The Koran is first and foremost a spiritual book that allows man to experience God."

Here Khorchide introduces some important distinctions, which could point the way towards a more modern understanding of Islam. He differentiates between the suras that originated in Mecca and those from Medina in accordance with the most recent theological research on Islam. In the suras from Mecca, Mohammed announced basic principles.

In the suras written while he was in Medina, the concern is with the concrete implementation of these principles "with the means and experiences that were available to him in the seventh century on the Arabian peninsula".

Leading the way out of a theological dilemma

Khorchide further differentiates between Mohammed as the Messenger of God and Mohammed as head of state in Medina, and, as a consequence, between immutable theological pronouncements and temporally dependent legal assertions in the Koran. 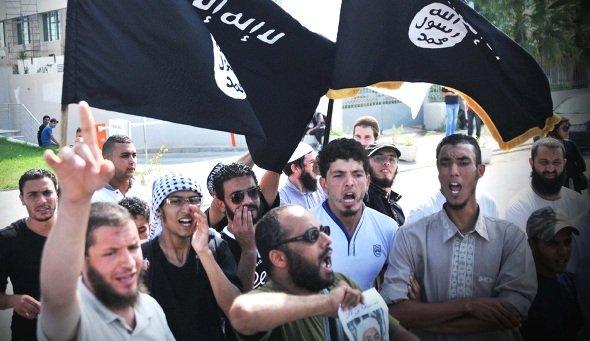 "All theologians face the burning question of how to adequately address the seemingly archaic elements of religion in today's world." - Pictured: Salafists protesting in Tunis, Tunisia

​​The task for Islamic theology is to separate pronouncements with timeless validity from those dependent on historical circumstances, to work out the intention of these pronouncements, and to transport them into precepts applicable in today's world.

Khorchide's humanistic understanding of the Koran is based on the work of Turkish theologians from the Ankara School. Through the use of hermeneutic techniques, Khorchide hopes to lead Muslims out of their dilemma of "either turning back to social structures from the seventh century in order to live according to the Koran or rejecting the Koran in order to live today".

Khorchide is not the first theologian to work in such a fashion, but the conclusions he draws go far beyond existing approaches. He develops a system to deal with problematic verses in the Koran. For example, there are many divergent statements in the Koran with respect to Christians and Jews, ranging from passages expressing the highest esteem to those of complete rejection. They are frequently the subject of bitter debate in which the corresponding verses are bandied about.

Khorchide assigns the various pronouncements to their historical context and can thereby explain why esteem for the other revealed religions is an intrinsic basic message of the Koran.

With methodical precision, Khorchide engages in debates, such as those also familiar to Christian and Jewish theologians. He even borrows ideas from the Second Vatican Council of the Catholic Church in his approach to understanding revelation. This is in no way objectionable, as it is common practice in an open society for scholarship to provide mutual inspiration. 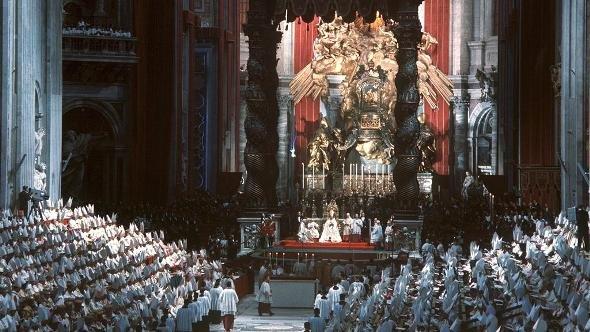 "It is common practice in an open society for scholarship to provide mutual inspiration." - Mouhanad Khorchide borrows ideas from the Second Vatican Council of the Catholic Church in his approach to understanding revelation

​​In fact, Islam in its early days was greatly stimulated by other cultures and philosophies. Khorchide also turns to more recent exegetical research on texts in the Koran, which shows that all three religions of the book are much closer in their essence than most believers are aware of.

By way of introduction, the author describes the biographical background to his theological work. This is one of the most fascinating chapters in the book, in which Khorchide provides a very personal depiction of the contradictions he experienced in his childhood.

Born in Beirut and raised in Saudi-Arabia by Palestinian parents, he saw for himself the liberal Islam of his family and that practiced in Lebanon as well as the traditionalist variant of the religion in Saudi Arabia, where even playing a game of Monopoly is regarded as a sin. When he came Austria to study, he discovered that he was better treated there as a Palestinian than in a country where everything constantly revolved around "true Islam".

A great deal in Khorchide's work is not as new as the publisher would like the reader to believe in its advertising for the book. Yet, he takes up already available approaches, fine-tunes them, and fits them into a classification system in order to attain a new, humanistic understanding of the Koran. As the book is also written in an understandable manner and frequently refers to current debates, it has all the makings of a classic work in the field.

Mouhanad Khorchide, "Islam ist Barmherzigkeit. Grundzüge einer modernen Religion" (Islam is Compassion. The Essentials of a Modern Religion), published by Verlag Herder in 2012. The title is not yet available in English.

In her latest novel, Catalan-Moroccan writer Najat El Hachmi tells the story of a young migrant woman struggling to balance her desire for freedom and the demands of tradition and ... END_OF_DOCUMENT_TOKEN_TO_BE_REPLACED

Benjamin Idriz, imam of the mosque in Penzberg near Munich, is one of the most prominent representatives of Islam in Germany. He sees his role as building bridges to mainstream ... END_OF_DOCUMENT_TOKEN_TO_BE_REPLACED

Turkish author and journalist Mustafa Akyol is one of the foremost pioneers of an Islam reconciled with modernity. Musa Bagrac spoke with Akyol for Qantara.de about his new book " ... END_OF_DOCUMENT_TOKEN_TO_BE_REPLACED

In view of the catastrophic supply situation in Afghanistan, UN authorities are sounding the alarm. Inflation and growing poverty are exacerbating the situation. The Taliban ... END_OF_DOCUMENT_TOKEN_TO_BE_REPLACED

For Western listeners, the sound of the sitar is perhaps the most cliched musical symbol of India. Sitar player Hindol Deb, who lives in Cologne, Germany, has just released his ... END_OF_DOCUMENT_TOKEN_TO_BE_REPLACED

People these days are seeking orientation in a rapidly changing world. In response, all religions – each unique in their customs and traditions – need to pull together, says Chief ... END_OF_DOCUMENT_TOKEN_TO_BE_REPLACED
Author:
Claudia Mende
Date:
Mail:
Send via mail

END_OF_DOCUMENT_TOKEN_TO_BE_REPLACED
Social media
and networks
Subscribe to our
newsletter