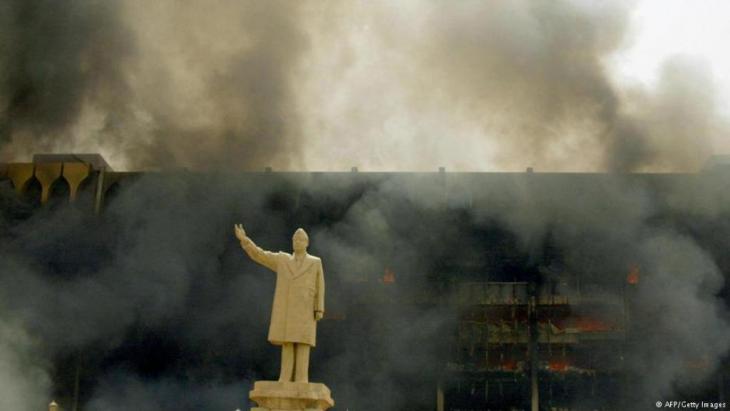 Murder and kidnapping in Iraq
An inexorable tide

In today's Iraq, there is no force more powerful than the militias and no voice louder than those who seek to drive a wedge between the religious denominations, says Iraqi writer Safaa Khalaf

There are no exact figures on the number of murders and kidnappings committed in Iraq; the authorities there are not interested in the long-term documentation of this kind of bad news, which has become a daily occurrence. For its part, the Iraqi press only really pays attention to such matters when there is a major public outcry. When they do, they initially "have no choice" but to relay the official version of events as related by the authorities, before subsequently replacing this version with a story dictated by their financial backers, who are either politically affiliated to them or allied to certain militias.

This "story" is then disseminated via the social networks, which mechanisms ensure that every event is only touched upon superficially, before being buried beneath an avalanche of new stories. A never-ending stream of new stories not only sates the hunger for sensationalism, but also stokes tension between the different religious denominations, fanning the flames of agitation that may ultimately lead to kidnapping and murder.

A hotbed of crime

Iraq – whose famous two rivers, the lifeblood of the country, are slowly drying out unheeded – has become a hotbed of crime, where murder and its subsequent justification has developed into a dubious art.

In this chaotic mire of violence and crime, the state and the authorities have degenerated, directly reflecting the ugly face of populism and sectarianism, thereby turning Iraqis into the victims of the ever-expanding machinery of death. They lack both the deeper knowledge and the discernment that would allow them to understand the connection between terrorism, social violence, and their causes with relation to the countless victims involved.

Fourteen years have passed since Saddam Hussein's regime was toppled by an occupying power and a "new" one was installed. Already infected with the corrosive virus of the "old" regime, what little  feeling of national unity that remained was killed off by the "new" regime. Throughout this period, successive governments and their ministries have failed to set up an official archive project that provides the public with reliable statistics about victims in Iraq. 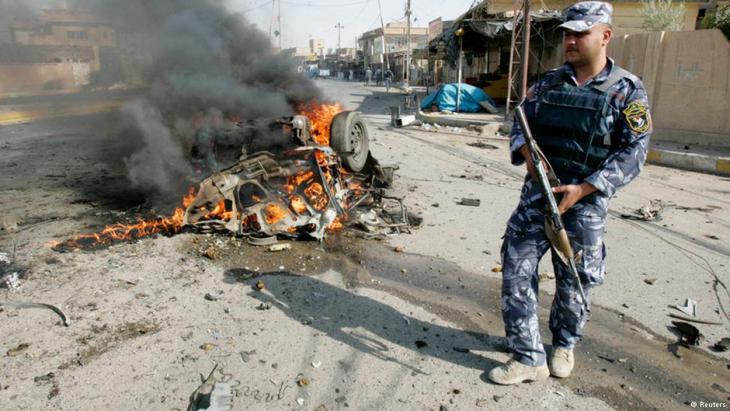 Caught in a vicious circle of sectarian violence: "Iraq – whose famous two rivers, the lifeblood of the country, are slowly drying out unheeded – has become a hotbed of crime, where murder and its subsequent justification has developed into a dubious art," writes Iraqi publicist Safaa Khalaf

Were it not for the statistics on the victims of violence in cities that are published once a month by the United Nations in Iraq (UNAMI) and the website "Iraq Body Count", which records the number of Iraqis killed, categorises each killing and researches the identity of the victims, it would be impossible to obtain any reliable figures about the phenomenon that is Iraq's rampant violence.

The government's opposition to UNAMI's monthly publication of figures about the number of victims, which in December 2016 also included the number of soldiers killed during the operation to retake Mosul, is evidence of the ignorance and boundless incompetence of the authorities. It is a typical example of its efforts to block the publication of reliable figures.

Against the backdrop of the increasing threat of militarisation and the arming of the most diverse groups, the government's opposition makes it patently clear just how much it fears that the consequences of its security policy failures will come to light.

Death as the harbinger of a new regime

On 10 April 2003, a purge swept through Iraq. Initially intended to eliminate supporters of Saddam Hussein's regime, it quickly developed into an organised but indiscriminate killing machine that hunted down Baathists, members of the security forces and the military, and fighter pilots alike. It also targeted artists and intellectuals, not to mention opponents of the toppled regime who had joined the opposition to the new regime.

Any reconciliation between Turkey and Syria’s Assad regime would have disastrous consequences for many Syrians, explains Syria expert Kristin Helberg END_OF_DOCUMENT_TOKEN_TO_BE_REPLACED

Iraq bears the scars of decades of conflict and has seen its antiquities plundered, yet the House of Manuscripts' collection has managed to survive END_OF_DOCUMENT_TOKEN_TO_BE_REPLACED

As Syrian camps housing families of Islamic State fighters get more dangerous, there are calls to bring children out, even if the mothers don't want to go. The idea of separating ... END_OF_DOCUMENT_TOKEN_TO_BE_REPLACED

Morocco has taken the 2022 World Cup by storm, with the northwest Africans reaching the semi-finals for the first time in their soccer history. As the knockout match approaches, ... END_OF_DOCUMENT_TOKEN_TO_BE_REPLACED

The Islamic Republic has been unable to quell the civil unrest that erupted three months ago, after Mahsa Amini died after being detained for violating hijab rules. Now the ... END_OF_DOCUMENT_TOKEN_TO_BE_REPLACED

The Kurds are under attack from two sides: from Turkey, and from Iran. The situation in their territories in northern Iraq is becoming increasingly desperate. Birgit Svensson ... END_OF_DOCUMENT_TOKEN_TO_BE_REPLACED
Author:
Safaa Khalaf
Date:
Mail:
Send via mail

END_OF_DOCUMENT_TOKEN_TO_BE_REPLACED
Social media
and networks
Subscribe to our
newsletter