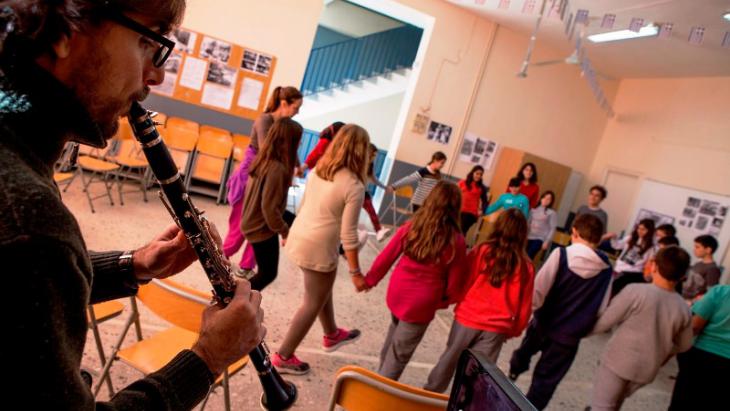 An inspirational idea from a violinist and a composer has led to the establishment of a new music festival on the Greek island of Chios. Their idea is to help build bridges between refugees and islanders – and maybe make the hard winter a little easier to bear. By Astrid Kaminski

The cellist stares at the feet of the oboist. The children and teenagers to his right and left are doing the same, as are the older boys, despite their best efforts at studied nonchalance. They look tired, but that′s hardly surprising since they had to wash their clothes between three and four in the morning.

The middle of the night is the best time to find warm water here in the so-called ′hotspot′ refugee camp in Vial on the eastern Aegean island of Chios. Despite the occasional stifled yawn, there is no let-up in practising the dance routine. The oboist Demetrios Karamintzas, who played with the Barenboim Said Academy in the Palestinian territories for many years, is rehearsing the basic steps of the dabke with them.

The musical accompaniment, an old folk song from Chios, is as unusual as the dancing musicians. The melody is performed instrumentally first of all and then sung. It is a song about an apple tree with beautiful apples. But the tree is growing on a cliff and reaching its fruit is difficult. Chiosian actress Avgoustina Lykourina acts out the dilemma through her movements and gestures.

Music and body language are the best modes of communication in this workshop group of Kurdish, Afghan, Syrian and Greek children and adolescents. And it is through this body language and the gestures that, as they grow in confidence, they are able to reveal their memories: an Afghan nursery rhyme, a Syrian ballad, a faster version of the dabke. Getting together in a room, such as here in the small philharmonic concert hall in the city of Chios, is unusual for them.

This past summer, violinist Olga Holdorff-Myriangou and composer Eleftherios Veniadis, both of whom have family roots on Chios and a working base in Berlin, set up the Chios Music Festival with the support of the Allianz Cultural Foundation. It was an immediate success.

Now, in late autumn, the festival is having a week-long reprise with a focus on workshops that bring native islanders and refugees together. The team, made up of an actress and seven internationally successful musicians, who also happen to be blessed with excellent social skills, is a stroke of luck. 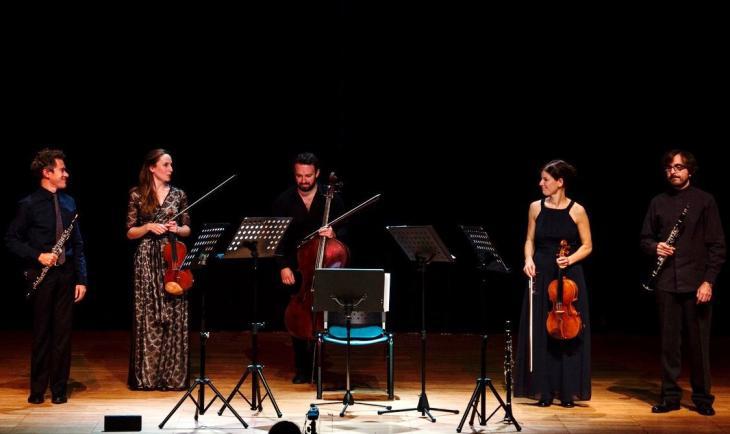 Demetrios Karamintzas, for example, helped create the "MitMachMusik" project for refugee children in Berlin, violist Leila Weber the "Hangarmusik" project. In Chios the team wants to use the power of music to bring people together and give them the strength to face the hard days of winter.

"For some it is hell"

"It could be a paradise here, but for some it is hell," says Olga Holdorff-Myriangou. She would like her festival, at the very least, to create happy memories. Though a modest wish, it may not be granted. The Vial camp is overcrowded and the refugees have much to endure: rain, cold, heaped up piles of rubbish, rats and inadequate sanitation and hygiene facilities.

The hotspot is located several miles outside the island capital of Chios. Designed to hold 1,100 people, it currently holds over 2,000, including around 350 children and is divided into a supervised official and a non-supervised part. While a group of men complain about the Greek police, the unaccompanied women here would like to see a greater police presence at the camp. Fear of their situation makes getting a good night′s sleep impossible.

Then again, things are far from ideal for the local people either. Media coverage of the refugee crisis has brought a sharp decline in the numbers of European tourists coming to the island. And since the attempted coup in 2016, the flow of tourists from Turkey, only seven kilometres away, has also collapsed. Turkish tourists are evidently worried about falling under general suspicion.

On top of all this comes the Greek government′s decision to raise VAT to the 24% rate currently in force in the rest of the country as part of its crisis management strategy. The aggression of refugees stranded on the island is sometimes directed against the islanders and that encourages right-wing extremist tendencies among the population, says Panagiota, a dedicated young Greek girl who has been rehearsing an intimate a cappella song circle.

That said, the island of Chios actually has a reputation for solidarity, with the percentage of radical right-wingers here below the national average. Many Chiosians themselves come from families with a refugee background. The grandparents of photographer Stamatis Menis, for instance, who contributed the photographs that accompany this article, fled from Turkey to Chios during the First World War and escaped German occupation forces by fleeing to Cyprus during World War II.

Sevie Paida′s uncle, who has a doctorate in Peace Studies, is a Greek education officer for underage refugees at the festival. He fled to Turkey during the Second World War and from there on to Syria and finally the Congo. The family of actress Avgoustina Lykourina also fled Turkey before the so-called population exchange of 1923.

Stories such as these are common on Chios. Festival founder Olga Hohldorff-Myriangou′s memories of the beginning of the refugee crisis are all of the willingness to help. Photographer Stamatis Menis prepared between 200 and 500 bowls of soup per day in his soup kitchen. Initially however the international NGOs limited the amount of aid the volunteers could provide by making it contingent on strict rules.

After the Greek government took over management of the refugee crisis last summer and with the last NGO, "Save the Children", leaving the island in December, the time came for the islanders to re-evaluate their position.

Building bridges between islanders and refugees

The Chios Music Festival points to a way forward in this regard. Not only because it draws on the spirit of open-mindedness, but also because the workshop format is the only way to build bridges between the local inhabitants and the refugees. "The problem", says composer Veniadis, is "that Chios itself is a bridge. No one knows how long they will stay." In spite of the ponderous slowness of the administrative process, few remain on the island for longer than six months. Integration is hardly practicable under these conditions and it is difficult to adapt the educational opportunities available. The situation is especially difficult for the youngest refugee children, who would like to continue their schooling.

Qamar, for instance, is the unaccompanied minor in the group who has been longest on the island. She fled from Iraq to Iran over seven years ago and went on to Turkey before eventually arriving in Chios.

Despite having received no formal school education over the years, she speaks perfect Turkish and has a reasonable command of English. Twelve-year-old Rana from Syria has not been to school for three years, yet she speaks excellent British English and whispers that she is now also learning Dutch. She hopes she will be able to travel on to relatives in the Netherlands.

She has brought her guitar to the Chios Music Festival workshops. The desire to learn is very strong. So too is the need for the company of others: "I want to come every day", says a 13-year-old Afghan boy who lost both parents on the Pakistan-Iran border.

After the workshop one of the helpers calls to say that the youngsters had been crying later at the reception centre – because they had had such a nice time. The young people of the island would also like to have more opportunities like this. Children are not always friendly, she says, "their behaviour comes from their parents. That is why we have to come together and have teachers who inspire us to think about things."

Germany's foreign policy is explicitly values-based. But what happens, Ralf Bosen asks, when democracy, the rule of law and human rights collide with the logic of trade and ... END_OF_DOCUMENT_TOKEN_TO_BE_REPLACED

No other Western poet was arguably so well-versed in the Koran or so fascinated by Islam as Germany's national hero, Goethe. In a new publication that examines all Goethe's ... END_OF_DOCUMENT_TOKEN_TO_BE_REPLACED

A deluge of books, movies, series and cover stories: ever since the events of 9/11, the West has seemed almost manically preoccupied with Islam. Yet this has rarely led to deeper ... END_OF_DOCUMENT_TOKEN_TO_BE_REPLACED

Twenty years after 9/11, the world is faced with the dual challenge of Islamophobia and anti-Westernism. Ahmet Kuru argues that Muslims in the West, well versed in both Western ... END_OF_DOCUMENT_TOKEN_TO_BE_REPLACED

Two decades after the attacks of 11 September 2001, the West faces the shattered debris of its failure – not only in Afghanistan, but also in Iraq, Syria, Libya and Yemen. What ... END_OF_DOCUMENT_TOKEN_TO_BE_REPLACED

Twenty years after 9/11, the United States is recalibrating its war policy. However, its assertions that the era of endless wars is over are a myth, writes Maha Hilal END_OF_DOCUMENT_TOKEN_TO_BE_REPLACED
Author:
Astrid Kaminski
Date:
Mail:
Send via mail

END_OF_DOCUMENT_TOKEN_TO_BE_REPLACED
Social media
and networks
Subscribe to our
newsletter