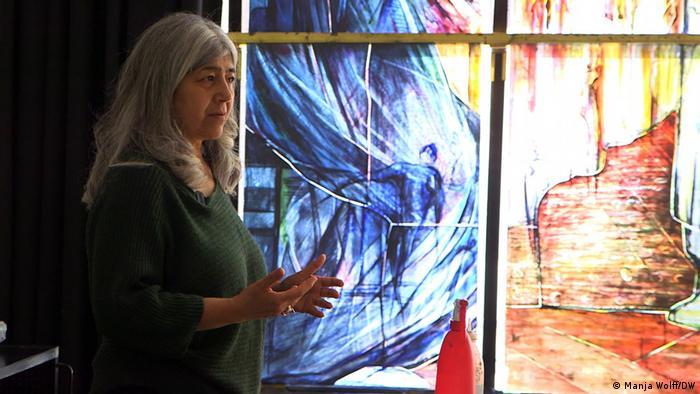 Mahbuba Maqsoodi in front of her work: in 2018, Maqsoodi won an international competition to design the stained glass windows at Tholey. Now the abbey in Germany's oldest monastery is getting thirty-four windows designed by a Muslim woman 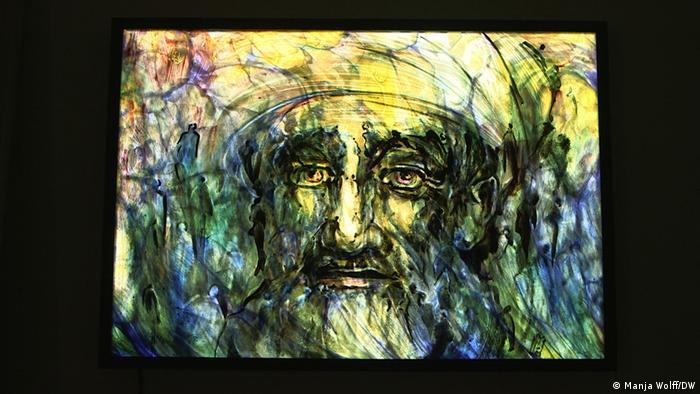 Maqsoodi's father: Mahbuba Maqsoodi grew up with six sisters in Herat, Afghanistan. Her father was keen to provide an education for his seven daughters and founded a girls' school in the village to educate them. From an early age, Mahbuba showed interest in painting miniatures – her interest in this ancient Persian tradition was fostered by her father 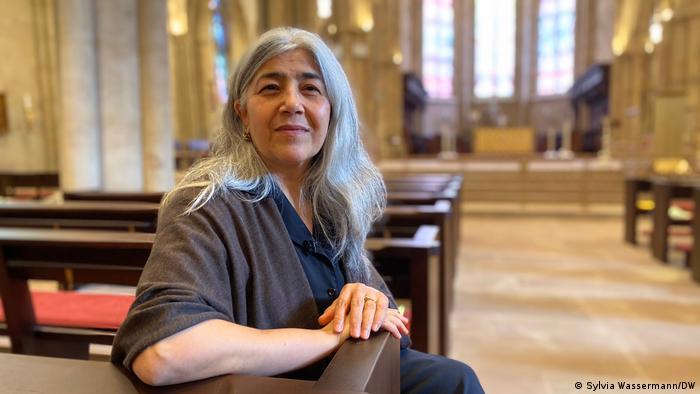 Maqsoodi in the abbey at Tholey: the monastery commission is just the latest phase in Maqsoodi's eventful life. Forced to flee from Afghanistan, she arrived in Germany as a refugee via St. Petersburg. She soon established herself as an artist. Today, major exhibitions are dedicated to her work. She has provided the stained glass for several places of worship in Austria and the USA 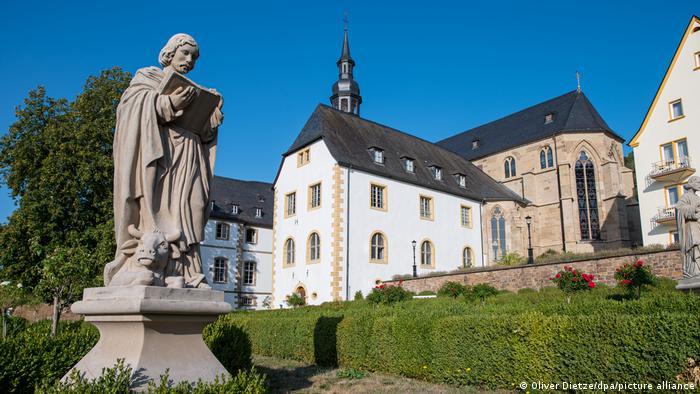 Tholey Monastery in the village of Tholey in Saarland: in 2008, Germany's oldest monastery was on the brink of closure. In a tour de force, the Benedictine monks managed to renovate the buildings and re-design the gardens. To overcome the last hurdle, a donation – a sum in the tens of millions – made it possible to replace the abbey windows as well 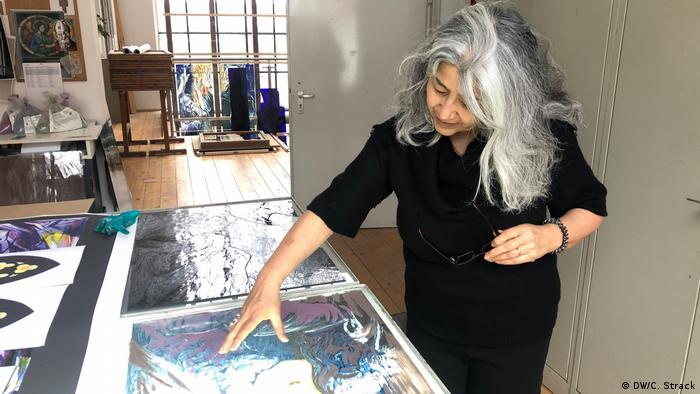 Maqsoodi in her studio: the artist has to come up with designs for thirty-four windows. Each window is made up of several individual pieces. Numerous processes are required before the sections can be inserted into the window frames. Cutting panes, fitting them, painting them several times, and finally chemically treating them to preserve everything. It took over two years to complete all the windows 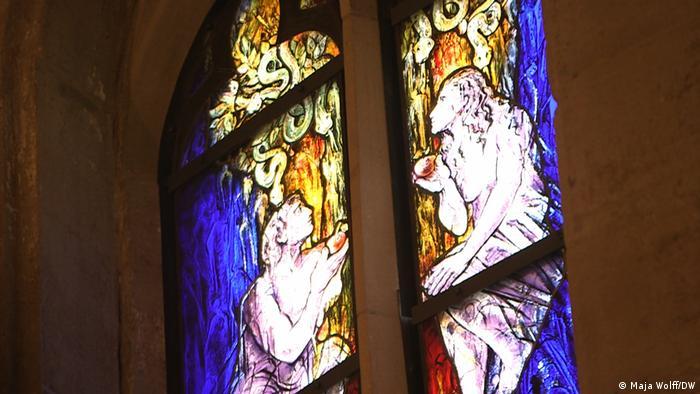 Adam and Eve: Maqsoodi has drawn on motifs from the Bible and church history. But she has also interpreted them. For example, the key Old Testament scene that leads to the expulsion from paradise. There, not only Eve, but Adam as well, is depicted holding an apple 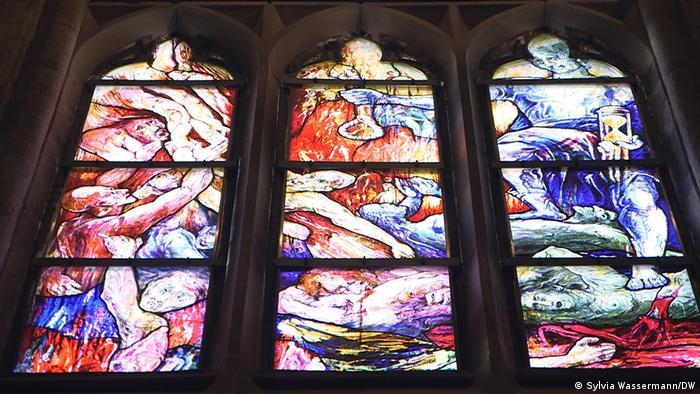 Fall from grace: Satan's fall from heaven is a central motif in Christian art. But the idea of the apostate angel is also widespread in the Koran. Whether the expulsion of the dissenting angel – as the personification of evil – by God therefore shows the devil, or whether the victory of the angel over the devil – as described in the Apocalypse – is depicted is open to interpretation 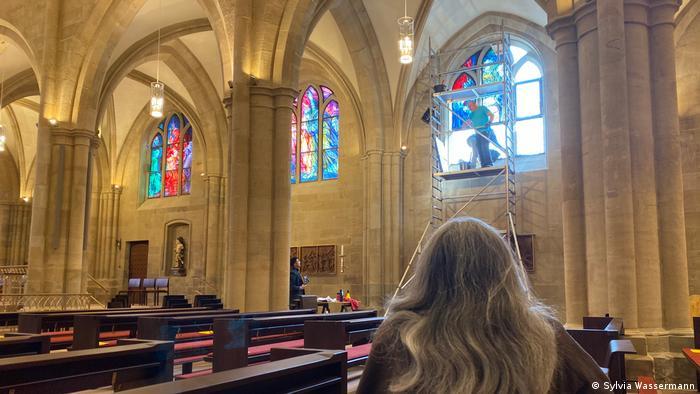 Maqsoodi supervises the installation of the last windows: the final installation of the panes of glass into their frames is a particularly nail-biting moment. Not only does each pane have to be fitted in the correct place, but also extreme care must be taken to avoid damaging the valuable, unique pieces 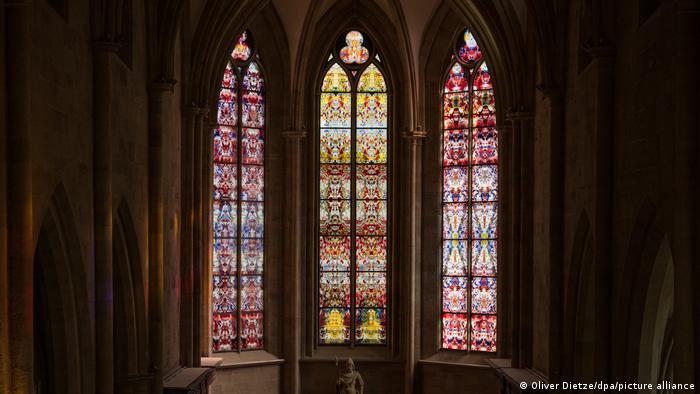 Richter windows in the chancel: Maqsoodi is in good company in Tholey. The world's most famous and probably most expensive living glass artist, Gerhard Richter, has donated three large windows for the chancel. As he did in Cologne Cathedral, Richter used older sketches as models and then had them digitally converted into glass. For the soon-to-be 90-year-old, this is his last major work, he says 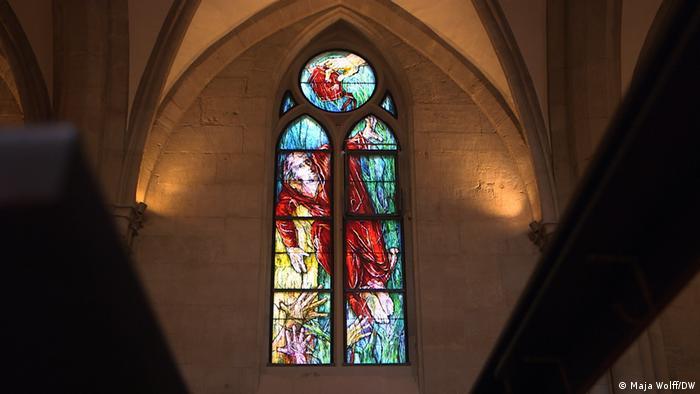 Murder of St. Kuno: shortly after Konrad, also known as Kuno, was appointed bishop of Trier in 1066, he was murdered and buried near the monastery of Tholey. At the instigation of the then Archbishop of Mainz, Siegfried, Kuno was included in the canon of saints and martyrs. His murderers were excommunicated 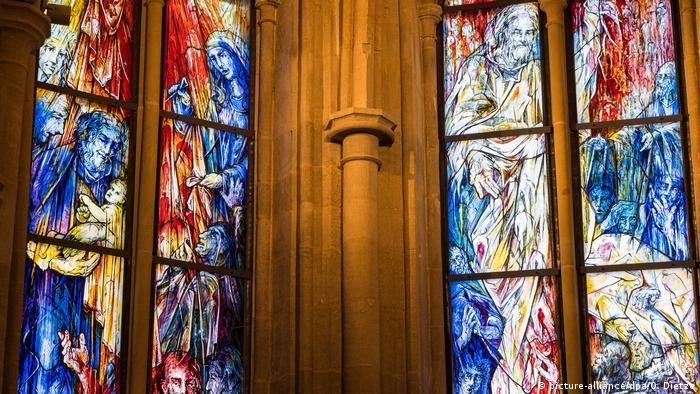 A Christmas scene and a Pentecost motif: two of the festivals central to the Christian calendar that are celebrated annually 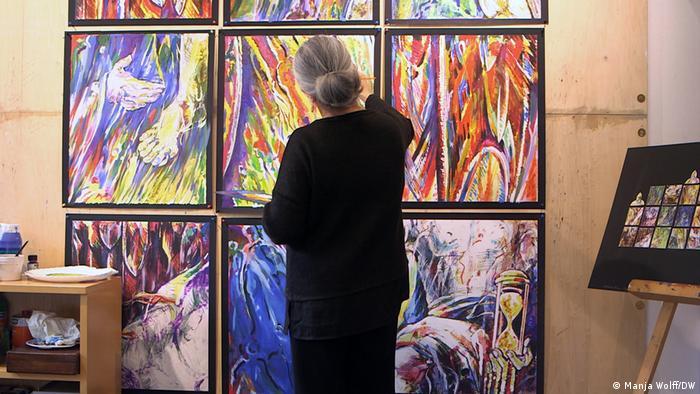 Mahbuba Maqsoodi in her studio: while Tholey is now preparing for the influx of visitors from all over the world and the monks are slightly concerned for their own peace and quiet, Mahbuba Maqsoodi has returned to her studio. Here she is already planning her next major exhibition

END_OF_DOCUMENT_TOKEN_TO_BE_REPLACED
Social media
and networks
Subscribe to our
newsletter