French woman Aravane Rezai is the daughter of Iranian immigrants. Rezai, the best Muslim tennis player on the WTA circuit and one of the favourites for the French Open title, has found a way to accommodate both her Western and Iranian roots. Wolfgang Scheffer reports 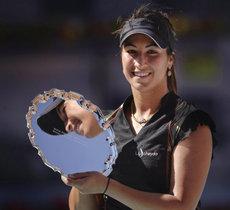 From a dismal French suburb to the top of the world tennis rankings: the Muslim tennis player Aravane Rezai

​​ Can a devout Muslim woman be a successful professional tennis player? Aravane Rezai recently left no doubt in anyone's mind as to the answer to this question: yes she can.

The 23-year-old daughter of Iranian immigrants won the women's tournament in Madrid, where players compete for 4.5 million dollars in prize money, the biggest prize money tournament on the WTA tour after the four Grand Slams.

Not only that, but on her way to the most lucrative victory of her career so far (US$ 600,000), the French woman beat three former world number ones: Justine Henin, Jelena Jankovic, and then in the final Venus Williams. Williams moved up to number two in the world rankings behind her sister, Serena, after her defeat in Madrid. In the final, Rezai came back from 2:5 down in the second set, saving five set points, to win 6:2, 7:5.

Tipped for a home win at Roland Garros

In fact, Rezai's performance as an outsider in Spain was so impressive that the young woman is now considered one of the favourites to win the French Open. Even though her coup in the Spanish capital only pushed her up to 16th in the world rankings, she too had to face the questions of the press at the marathon press conferences organized for tournament favourites in Paris.

The darling of the crowds rose to expectations in the first round at Roland Garros, easily beating the Canadian Heidi El Tabakh 6:1, 6:1. She goes on to meet Angelique Kerber of Germany in the second round.

And so Aravane Rezai is France's great hope (or at least a hot tip for a home win in Roland Garros). This is the pinnacle of her career so far – a story that features a fanatical tennis father, his obedient daughter, a family from a dismal suburb of St. Etienne, immigrants that overcome all the odds, and a young woman who successfully manages the balancing act between the demands of religion and a very Western sport.

No Bermudas for Muslim women players

Tennis players are required by the sports associations to dress "respectfully"; the WTA Tour bans clothes that are too revealing. At the start of her career, Aravane Rezai sought permission to play in Bermudas. He request was denied: "Why is Nadal allowed to wear these kind of shorts and I am not?" She is convinced that "if all women players could wear what they like, many more Muslim women would play tennis."

Not without my family: mother Nouchine accompanies her daughter on her travels as her physiotherapist; brother Anauch, a tennis coach, is her sparring partner

As her father, Arsalan Rezai, puts it, she has come up with a compromise: "In the West she dresses like a European Muslim woman; in Iran she follows the dress code there."

At this stage, his daughter interprets this regulation very liberally: she has recently been causing a stir on the court with her unusual and revealing outfits. It must be said that in more ways than this, the daughter would appear to be cutting the umbilical cord to her father.

The former car mechanic is no longer her trainer. This position is now held by Patrick Mouratouglou of the renowned Paris Tennis Academy. That being said, she has not broken ties with her family. Her mother, Nouchine Rezai, accompanies the right-hander with the double-handed backhand on her travels as her physiotherapist; her brother Anauch, a tennis coach, is her sparring partner. Her strict father now only pulls the strings behind the scenes. "But that is good. You don't get results without hard work."

If Arsalan Rezai is to be believed, his daughter's early training took place under adventurous conditions on the courts of the local club in St. Etienne. She wasn't a member – the family didn't have the money for that – she and her father instead climbed over the fence to get into the club to play without permission at night.

"I am proud to be Iranian. At home we speak Farsi," says Rezai, the daughter of Iranian immigrants

When they were found out, her father built his own court on a patch of waste land and illuminated it at night using the headlights of his car. In winter, he lit bonfires so that Aravane could warm her hands.

This tough training and the unusual location were worth it and Aravane soon began winning tournaments. But the tennis establishment remained at odds with the outsider, especially because Arsalan Rezai openly declared that he wanted to make his daughter the world number one in women's tennis.

"I'm playing for France, but not for the association."

In 2006, Rezai, who is 5'4" and weighs approx 9 1/2 stone, qualified for the French Open for the first time. At the time she said: "I'm playing for France, but not for the association." The differences between player and association have since been patched up; Aravane Rezai now plays for France, the country where she was born, in the Fed Cup.

Nevertheless, after her victory in Madrid she said: "I am proud to be Iranian. At home we speak Farsi." She has twice won gold for the country of her parents in the women's singles and doubles at the Olympic Games for Muslim women in 2001 and 2005 respectively.

The matches, which took place in Teheran, were played behind high fences so that men would not be able to catch a glimpse of women playing their sport in shorts and without the headscarf, which is a hindrance in tennis. But her representation of another country didn't make a difference because the WTA does not recognize the tournament as an official event.

After the French Open, Aravane Rezai wants to travel to Iran again in order to, as she says, tell people about how she made it to the top of the world rankings. The best Muslim woman tennis player in the world wants to encourage other young women to take to the court. It will probably be easier to win the second Grand Slam tournament of the year than to convince the mullahs to relax the dress code for Muslim sportswomen.

Portrait of the Footballer Fatmire Bajramaj
From Refugee to World Champion
Fatmire "Lira" Bajramaj is the superstar of German women's football. The young Muslim shot goals on a TV sports show in high heels, wears makeup on the pitch and is active in integration projects. She recently published her biography at the tender age of 22. By André Tucic

Zenab El-Khatib
Headscarf Pioneer
Zenab El-Khatib is just 15 years old, but is already heralded for her pioneering role. After all, it is still unusual to see a woman running for a goal while wearing a headscarf. But not for Zenab and the Danish U-16 national football team. A portrait by André Tucic

END_OF_DOCUMENT_TOKEN_TO_BE_REPLACED
Social media
and networks
Subscribe to our
newsletter